Kym Marsh broke down in tears as she spoke with her father after his incurable prostate cancer diagnosis.

The presenter, 44, filmed the interaction with her dad Dave, 76, in a segment for BBC Morning Live on Thursday to raise awareness of the disease.

It was revealed this week that Dave’s cancer has spread to his pelvis, spine, ribs and left leg and is incurable after he delayed going to a doctor in lockdown.

Heartbreaking: Kym Marsh broke down in tears as she spoke with her father Dave after his incurable prostate cancer diagnosis in a clip on Wednesday’s BBC Morning Live

In an emotional clip, Kym turned to her father and said: ‘You’ve always taught me to be strong, never to take things lying down, sink or swim’, to which Dave responded, ‘you’ve only got one life, look after it and live it’.

‘You certainly do that,’ Kim replied, breaking down in tears as she sobbed, ‘I’m in absolute awe of you dad, your fight and your… love you dad, so proud of you’. 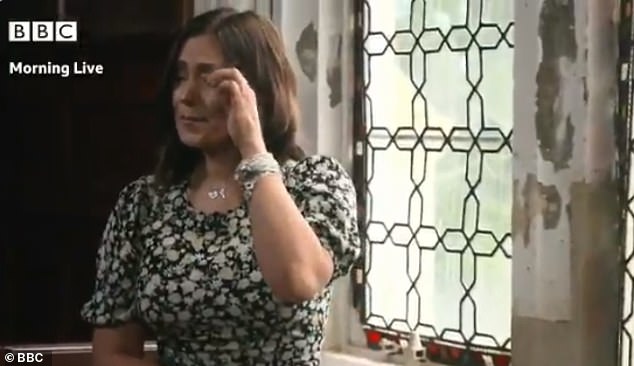 Emotional: Kym was left in tears as she spoke about her father’s devastating diagnosis on the show in order to raise awareness of the disease 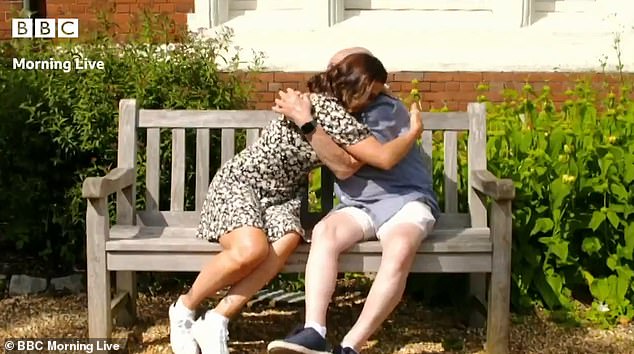 Tragic: In an emotional clip, Kym turned to her father and said, ‘You’ve always taught me to be strong, never to take things lying down, sink or swim’

In another segment of the show, a tearful Kym also spoke to Prostate Cancer UK’s Chief Executive Angela Culhane about the emotional support her father needs.

Kym explained: ‘Dad’s so grateful he’s been able to put on a treatment. He’s not really been told where to go for emotional support for him.

‘I think it’s been a real struggle and for us to see dad cry, and be as emotional as he is, it’s not like him to be like that.

‘So for us to watch that it’s really difficult for us as well. We’re not quite sure how we can support him.’ 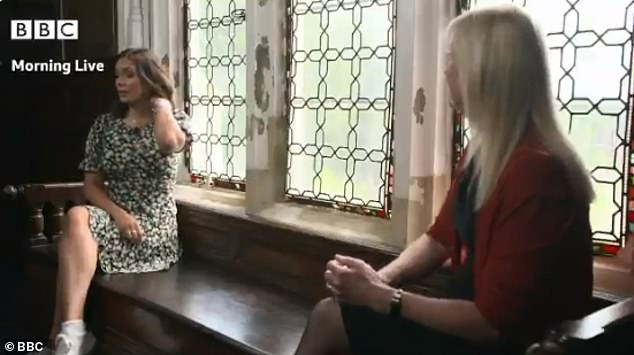 Upsetting: In another segment of the show, a tearful Kym also spoke to Prostate Cancer UK’s Chief Executive Angela Culhane about the emotional support her father needs

Kym revealed her father’s diagnosis on Wednesday as she praised her ‘close’ family for helping each other through the awful news.

She admitted: ‘It has been a very difficult time… The reality is that in Dad’s case it has now spread to his pelvis, spine, ribs and left leg, which is of course bad news.

The former Coronation Street actress continued that doctors are ‘talking about it being incurable’ but also treatable and hope to extend her dad’s life.

She added that although Dave is still in ‘a lot of pain’, he is responding well to some hormone treatments. 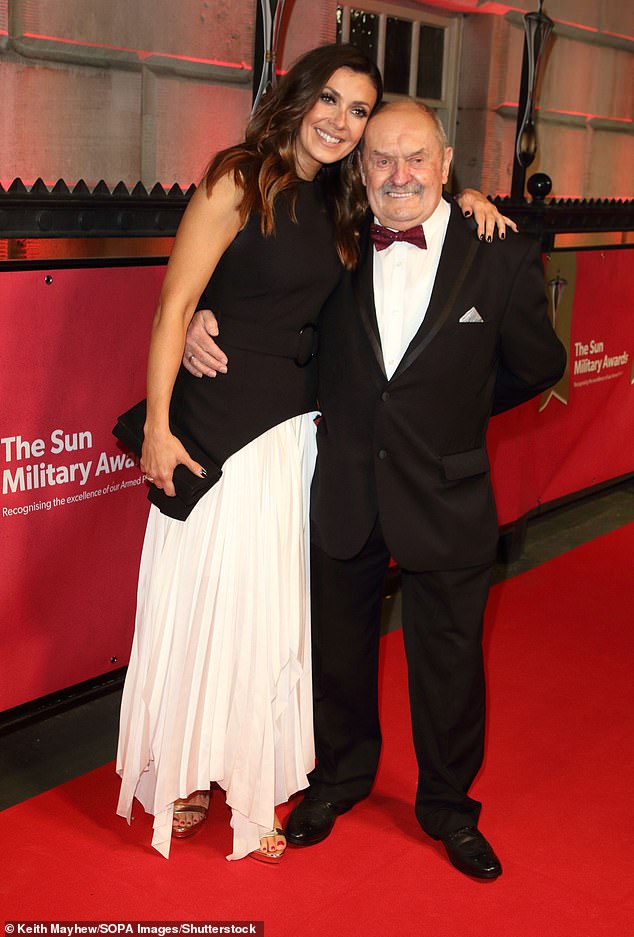 Heartbreaking: Kym revealed her father’s diagnosis on Wednesday as she praised her ‘close’ family for helping each other through the awful news (pictured in February 2020)

Dave, who admitted he had ‘ignored’ having pain for some time, added that his wish to walk newly-engaged Kym down the aisle is giving him the strength to keep going.

Kym got engaged last Saturday on her birthday to soldier Scott Ratcliff.

Dave said: ‘I want to be fit and well enough to walk Kym down the aisle after she recently got engaged… making sure I’m there means the world to me.’

The actress and her father, who is now using a mobility scooter, encouraged others to get checked, especially after lockdown when many didn’t want to go a doctors.

Official figures have shown that the number of men urgently referred for suspected prostate cancer fell by more than a quarter during the pandemic. 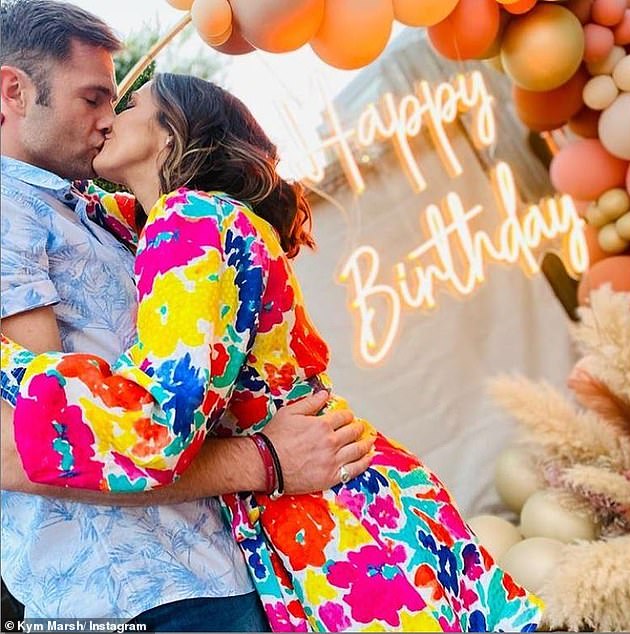 Engagement: Dave said his wish to walk newly-engaged Kym down the aisle is giving him the strength to keep going (Kym pictured with her fiancé Scott Ratcliff)

NHS England data shows the number of patients urgently referred for the cancer fell by 28 per cent between April 2020 and January of this year – about 52,000 fewer.

The charity Prostate Cancer UK estimates at least 8,600 fewer men started treatment for prostate cancer in that time, down around a third on 2019.

It said the drop in referrals is largely attributed to fewer men seeing their GP during this time.

Urgent cancer referrals are made when family doctors strongly suspect a patient may have the disease.

Kym and Dave told the publication that although they can never know for certain if things could have been different, they do know that ‘speed is crucial’ with cancer.

The duo encouraged others who have been putting off making appointments to call their GPs and get checked out. 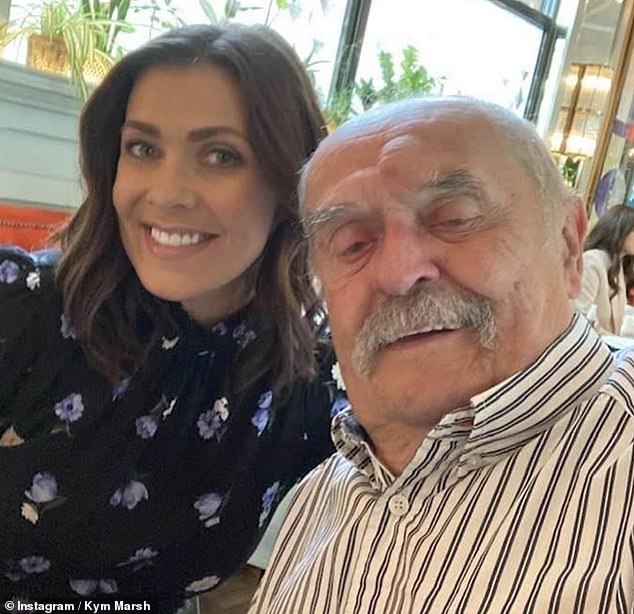 Worrying: Official figures have shown that the number of men urgently referred for suspected prostate cancer fell by more than a quarter during the pandemic (Kym and Dave pictured)

The sad news comes just days after Kym announced her engagement on Saturday.

The former Coronation Street star posed loved-up snap of herself and fiancé Scott, 32, taken at the moment the Army Major beau proposed over the weekend.

Sharing the picture of herself and Scott kissing in front of a light-up Happy Birthday sign on Instagram on Sunday, Kym wrote: ‘I said YES!!!!!! Sooooo happy!!! ❤️’

The actress shared the exciting news with fans in an interview with OK! and said she’s ‘over the moon’ to be marrying her beau after nearly three years together.

She said: ‘I’m absolutely over the moon – I can’t believe it. It’s been the best birthday surprise ever. I can’t stop smiling!’

It means prostate cancer is behind only lung and bowel in terms of how many people it kills in Britain.

Despite this, it receives less than half the research funding of breast cancer and treatments for the disease are trailing at least a decade behind.

The Hear’Say star looked radiant as she stole a kiss from her new fiancé, wearing a striking floral dress for her birthday celebrations.

The couple had been dating since July 2018 but have had to endure long stints of separation as Scott serves abroad, with Kym admitting last April that they had at the time been apart for seven months.

She previously told The Sun that the Covid lockdown has meant Scott is spending more time at home.

Kym said: ‘He’s actually home. He was due to go to staff college in September but we’ve ended up spending most of the past year together.

‘I feel so lucky to be in this situation. It has given me the opportunity to have more time with Scott, my son David, my daughters Emilie and Polly and the rest of my family. I’m not taking those things for granted.’ 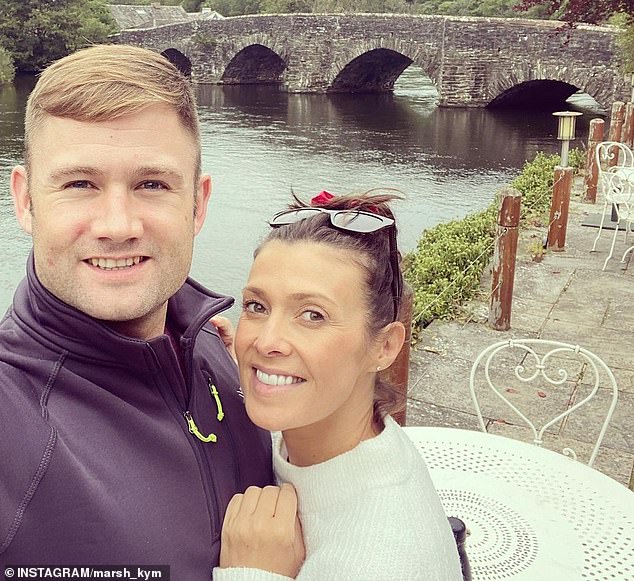 Happy news! The actress shared the exciting engagement news in an interview with OK! and said she’s ‘over the moon’ to be marrying the Army Major after nearly three years together

Kym had split from Matt Baker three months before sparking up a romance with Scott, after a two year romance.

She was first in a relationship with builder David Cunliffe before her rise to fame in 2001’s Popstars, and the couple had a son David, 25, and daughter Emilie, 25, during a five-year relationship.

After breaking onto the pop scene as a member of Hear’Say Kym married EastEnders star Jack Ryder, 36, in 2002, but they divorced in 2009 after she admitted having an affair with Hollyoaks star Jamie Lomas, 43.

Kym went onto marry Jamie in 2012, and the couple have daughter Polly, eight. The couple’s first child Archie, passed away shortly after his premature birth in 2009.

Just over a year after tying the knot, Kym filed for divorce from Jamie in 2013 citing ‘unreasonable behaviour. She is also a grandmother, with Emilie welcoming baby son Teddy in May 2019. 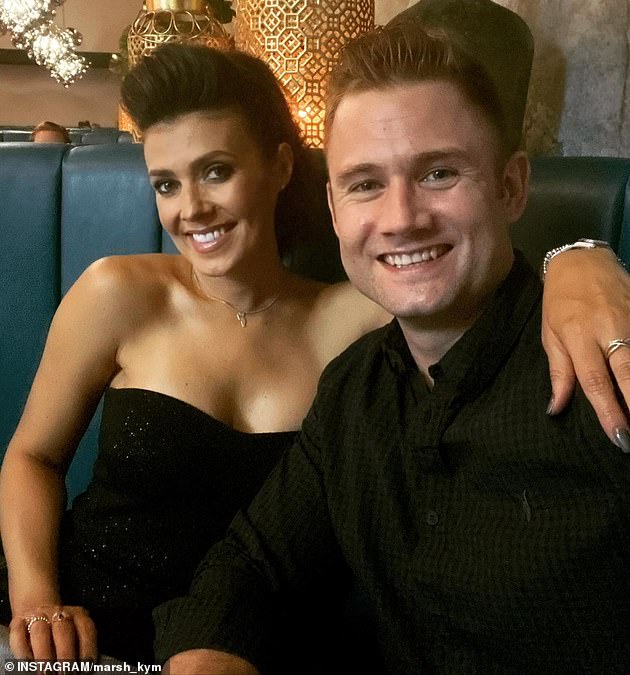 Wedding bells! Kym and Scott got to spend lots of time together during the pandemic