A prominent Labor MP has accused Scott Morrison of ‘offending’ China by calling for an independent inquiry into the coronavirus.

He accused the Morrison government of deliberately ‘offending the Chinese’ by making a series of calls for the inquiry, which China has finally agreed to.

Mr Morrison’s remarks were met with disdain by some Chinese government officials, with an unprecedented 80 per cent tariff since slapped on barley exports.

China is Australia’s biggest trading partner, buying 35 per cent of all exports.

‘The world was always going to have an inquiry into COVID-19. Of course it was,’ Mr Fitzgibbon told ABC.

The relationship between Australia and China has become tense during the former’s calls for an independent coronavirus inquiry (pictured, a wet market in Guangzhou on May 4) 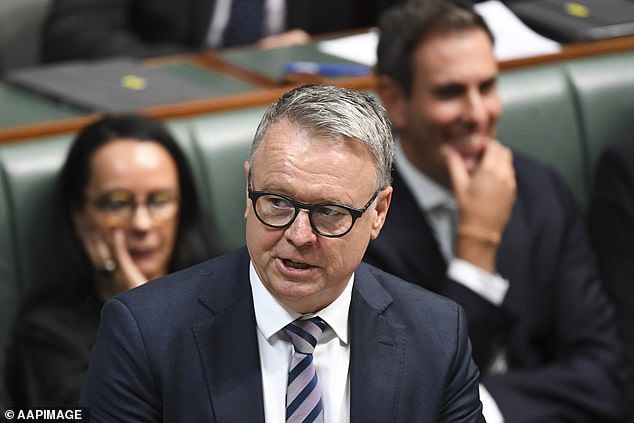 ‘And China was always going to agree to an inquiry because it’s in China’s interests too, in the medium to long term.

‘So what was the interest the prime minister was pursuing?

‘Running out there, in front of the pack, not knowing what model he was talking about, without consulting anyone … How did that help Australia?

‘We didn’t need to be out there in front, offending the Chinese.’

China has insisted the barley tariffs are unrelated to the cornavirus inquiry, but are instead the result of a long-standing investigation into dumping – where prices are artificially altered. 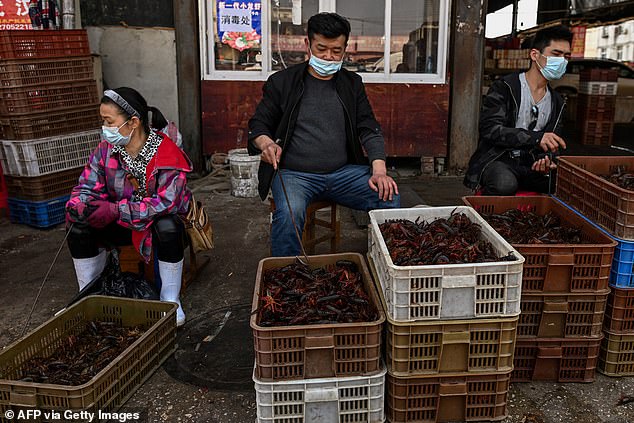 Vendors are seen wearing face masks as they sell prawns in Wuhan (pictured on April 15), with wet markets believed to be the source of COVID-19 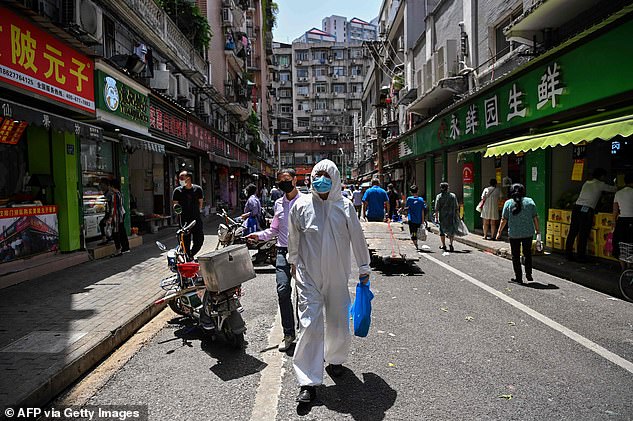 A man wearing protective gear walks past shops in Wuhan, where the virus began in December, on May 18 (pictured) after restrictions were lifted

In fact, Chinese President Xi Jinping was one of the last world leaders to sign the World Health Assembly resolution to hold the inquiry.

But it is a period of tense relations between the two nations, with Chinese officials making a series of barbed remarks about Australia.

His comments go against the Labor party’s agreed position on the situation, The Australian reported. 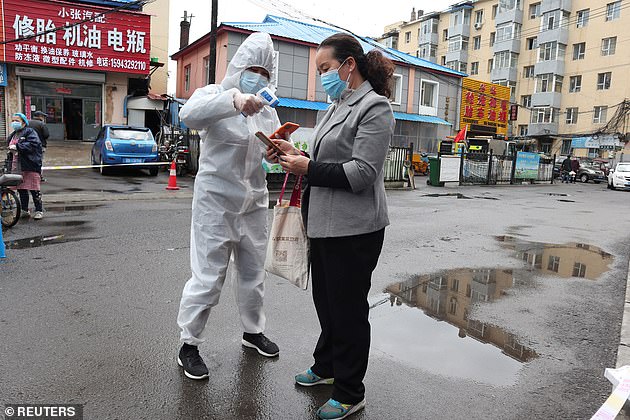 The party’s leader, Anthony Albanese, has shown strong support for taking action on China in response to the barley tariffs, as well as praising the idea of an inquiry.

‘We supported (the review) on day one … We supported it consistently. In the end, this was a EU resolution. It’s a good thing,’ he told Sky News on Wednesday.

It comes after a Chinese commentator accused of Australia of being a ‘frustrating’ and ‘un-friendly’ trading partner.

The Global Times, a mouthpiece for the communist government, accused Australia of ‘exploiting’ China and presenting itself ‘as a victim’.

On Monday, China announced the 80.5 per cent levy on barley exports would start on Tuesday, after weeks of threatening to boycott Australian industries. 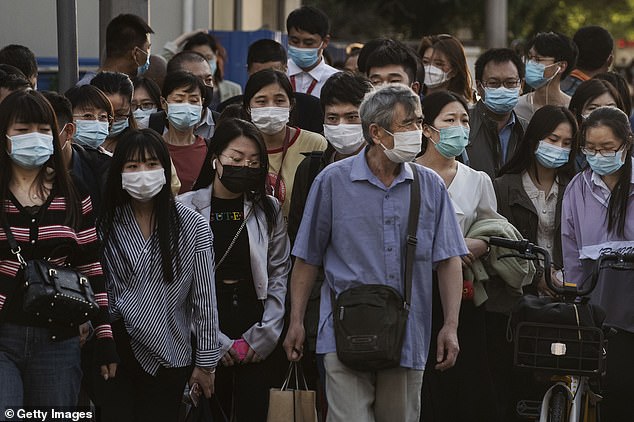 Australia sends between half and two-thirds of all its barley to China, making the tariff decision a massive blow to the $600 million a year industry.

Trade Minister Simon Birmingham revealed the government was given no advanced notice of China’s decision and called it ‘deeply disappointing’.

‘From China’s perspective, Australia has never been a friendly trading partner,’ a piece in the state-run Global Times said.

‘And consultations with the country on trade issues have always been frustrating, which has apparently weakened its motivation to promote bilateral trade.

‘The Australian government seems more interested in exploiting China’s suspension of some beef imports and its potential imposition of tariffs on Australian barley to describe itself as a victim of trade sanctions.’ 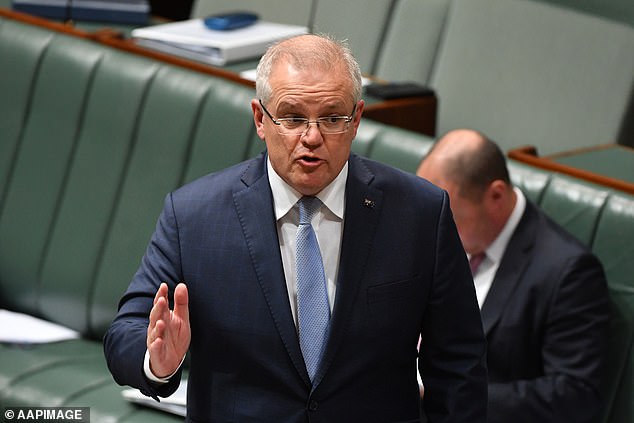 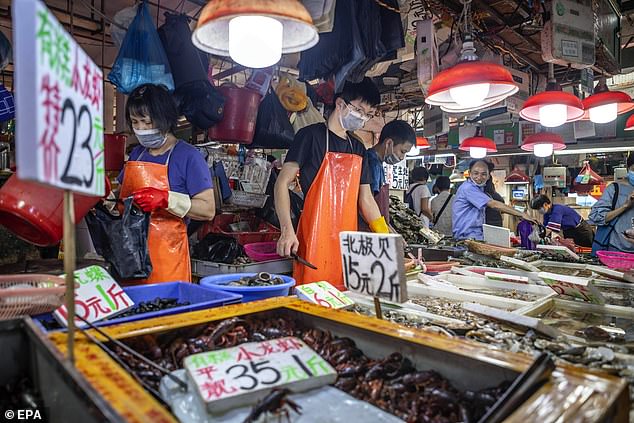 The COVID-19 outbreak is thought to have begun at a wet market in the Chinese city of Wuhan (pictured, a similar market reopened in Guangzhou on May 4)

China claimed Australia was dumping barley and subsidising farmers, insisting the tariffs are nothing to do with coronavirus.

Between half and two-thirds of all Australian barley is sold to China.

Barley is grown across 4,035,000 hectares, with the largest amount being grown in Western Australia.

Australia’s grains industry accounts for more than 170,000 jobs across Australia from farm to export dock.

About 65 per cent of Australia’s overall grain produced is exported.

This includes up to 90 per cent of that grown per in Western Australia and South Australia.

‘We learnt through the official notification that the Chinese Government made. It’s a deeply disappointing decision particularly for Australian barley farmers,’ Mr Birmingham told Today on Tuesday morning.

‘This is a decision that reflects on the Chinese Government. We’ll look at the details of it carefully and closely. It is a deeply disappointing decision.

‘We’ll analyse all the details of it thoroughly and reserve all our rights in terms of how we appeal, how we respond.’

The tariff, to remain in place for five years, is set to cripple Australia’s drought-affected grain farmers.

Australia is the biggest barley supplier to China, exporting between $1.5 billion and $2 billion worth a year, which is more than half its exports. 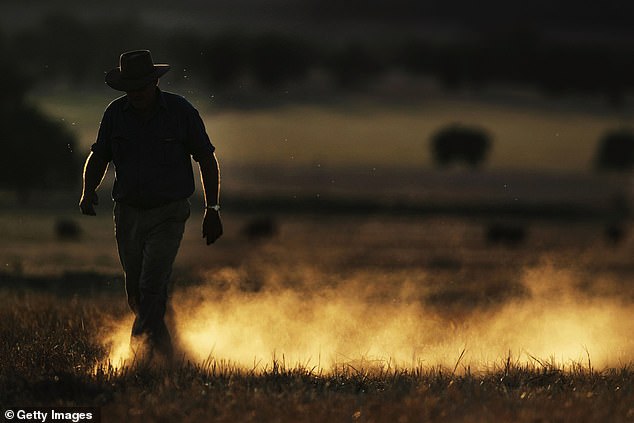