Bill Shorten’s big-spending election promises will be offset by a $154billion tax grab over the next decade as Labor moves to assure voters it can properly manage the economy.

With eight days to go until the election, Labor released its costings showing how it would pay for its $120billion spending spree on everything from free childcare and dental visits to multi-billion renewable energy investments and more university places.

Shadow treasurer Chris Bowen promised a Labor government would deliver bigger and faster surpluses than the Coalition by cracking down on negative gearing and tax refunds for rich retirees.

Prime Minister Scott Morrison argued that Australian could not afford a big-spending Labor government, moments after Labor’s costings were released.

‘There’s always something fishy about Labor’s claims to be able to manage money,’ he told reporters in Rockhampton on Friday.

Labor’s health, childcare, education and climate change policies add up to more than $120billion over the next decade, as it also vows to slash Australia’s carbon emissions by 45 per cent within 11 years.

Should it win the May 18 election, Labor is vowing to spend $55million on a national vote for a republic by 2022, even though the proposal was rejected at a referendum in 1999.

It is also promising to spend $76million between during the next four years on legal aid for criminal defendants and another $6million promoting ‘LGBTIQ equality’.

To pay for its election commitments, Mr Bowen and the Opposition’s finance spokesman Jim Chalmers have released Labor’s costing, showing they can find budget savings of $154billion over the next decade. 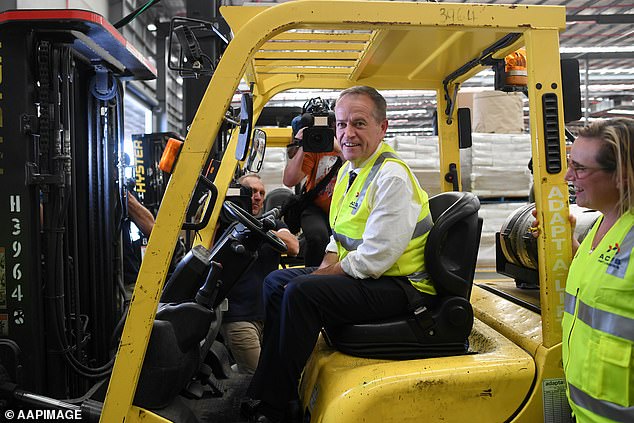 Mr Shorten, the man favoured to win the election in eight days, is running on a platform of giving free dental care to pensioners, boosting childcare rebates, helping another 200,000 Australians go to university and recruiting 23,000 more teachers

They are also vowing to deliver bigger budget surpluses than the Coalition over the next four years, while putting extra money into health and education and along with some income tax cuts.

‘Today we’re confirming bigger budget surpluses each and every year under a Shorten Labor government,’ Mr Bowen told reporters at Parliament House in Canberra on Friday.

‘We can deliver these bigger budget surpluses and the bigger investments in health and education while also assuming tax relief going forward.’

Labor, however, hasn’t delivered a Budget surplus since 1989, back when Bob Hawke was prime minister. 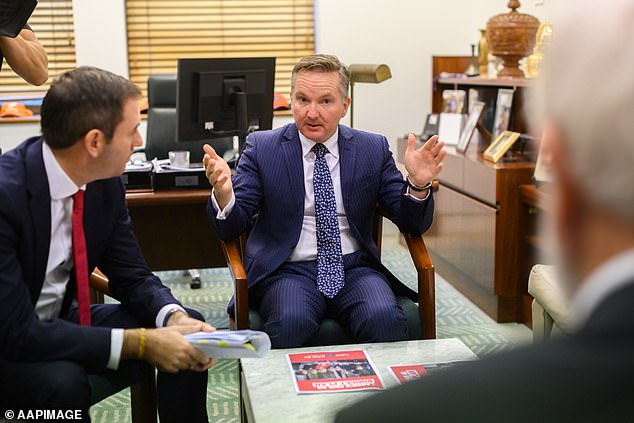 To pay for those promises, Mr Bowen and the Opposition’s finance spokesman Jim Chalmers have released Labor’s costing, showing they can find budget savings of $154billion over the next decade

Like Mr Hawke during the mid-1980s, Labor is vowing to scrap negative gearing from January 2020 for future purchases of existing properties.

It is also promising to halve the capital gains tax discount from 50 per cent to 25 per cent.

Labor’s plan to return to the black

Surpluses over the forward estimates – $57.9 billion ($40.8 billion under coalition)

Labor’s costings estimated its negative gearing and capital gains changes would save taxpayers $2.8billion between 2020 and 2023.

Liberal campaign spokesman Simon Birmingham, a South Australian senator, said Labor had failed to prove how it could deliver a budget surplus.

‘Many Australians today are going to hear the Labor Party claiming that Labor will deliver bigger surpluses and they will see pigs flying through the sky,’ he told Nine’s Today on Friday.

Labor costings promised a return to surplus in 2019/20, as well as a surplus of one per cent of GDP by 2022/23 ‘four years earlier than the government is forecasting’.

Along with reining in negative gearing, Labor is also vowing to scrap franking credits, or tax refunds, for share-owning retirees who don’t pay income tax.

The money would fund a $10 billion plan to uncap student places, giving an extra 200,000 Australians the chance to go obtain a degree.

Labor is promising to spend $14billion on schools over the next decade to fund 13,000 teachers and 23,000 teacher assistants. 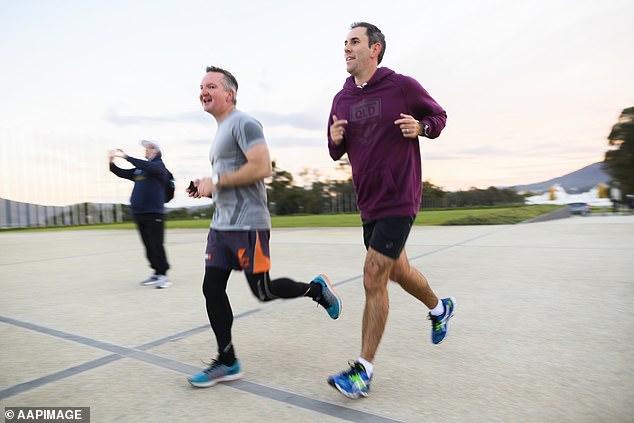 Labor is also vowing to deliver bigger budget surpluses than the Coalition over the next four years, while putting extra money into health and education and along with some income tax cuts (pictured are Mr Bowen and Mr Chalmers in Canberra on Friday morning)

On top of that, it is also vowing to spend $2.8 billion on more hospital beds in a bid to reduce elective surgery waiting times and another $2.3billion on out-of-pocket cancer treatment.

Labor’s budget bottom line incorporates a technical working assumption that tax receipts do not rise above 24.3 per cent of GDP over the next decade.

The Opposition is also vowing to boost the wages of childcare workers, which it estimated would cost taxpayers $9.9billion over the next decade.

It is understood the pay top-up will be limited to qualified staff in commonwealth-funded centres, excluding those in local and state government-backed complexes.

Mr Shorten told reporters in Cairns on Friday, ahead of the release of Labor’s costings, it was important to deliver a pay rise to the ‘first people to whom we entrust the kids outside of the family unit’.

‘We’ve come up with an envelope of funding to improve wages,’ Mr Shorten said.

Those earning $40,000 a year would receive $549 worth of tax cuts under Labor compared with $480 under the Coalition.

Those earning more than $48,000 a year would get the same promised tax cuts, regardless of who wins the election.