A Labour activist who claimed anti-Semitism is being ‘weaponised against the Left’ has been employed by Jeremy Corbyn to rebuild the party’s fractured relationship with the Jewish community.

Heather Mendick, a member of Labour’s hardline Momentum group, has been given the sensitive role despite making a series of controversial remarks.

Last year she joined MP Chris Williamson on his ‘Democracy Roadshow’, touring the country calling for mandatory reselections for sitting Labour MPs. Mr Williamson has since been suspended by the party over his remarks on anti-Semitism.

At one event in east London, as Labour was coming under fire for widespread anti-Semitism, Miss Mendick criticised calls for the party to adopt the IHRA (International Holocaust Remembrance Alliance) definition of what constitutes anti-Semitism. She dismissed the internationally recognised definition – which includes Holocaust denial, expressing hatred towards Jews and holding Jewish people collectively responsible for the actions of Israel –claiming it was ‘unjustifiable and politically motivated’.

Mr Williamson was suspended by the party after he said Labour had been ‘too apologetic’ over anti-Semitism and had ‘given too much ground’ in the face of criticism over the issue.

Miss Mendick had been a prolific defender of Mr Corbyn on Twitter but has now deleted her account. However, the Daily Mail has been shown a series of tweets she posted, including one message where she warned that anti-Semitism was being ‘weaponised against the Left’. 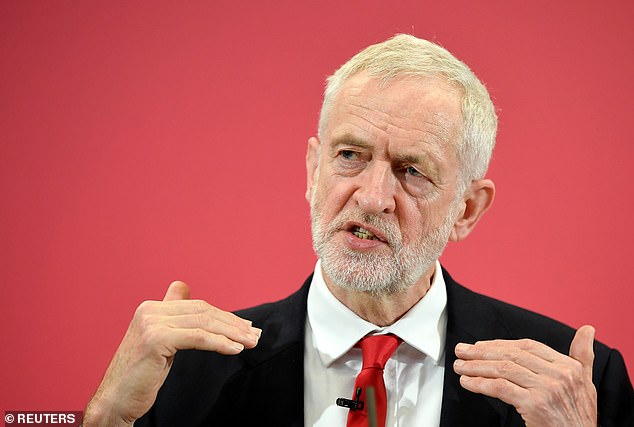 In February she repeated the opinion in an article she co-authored for the hard-Left Morning Star newspaper.

She wrote there had been a ‘weaponisation of anti-Semitism against the Left’ and warned that it had been ‘used to silence criticism of Israel’.

Miss Mendick also defended Pete Willsman, who sits on Labour’s National Executive Committee (NEC), after he was criticised for remarks he made about anti-Semitism. Mr Willsman was recorded saying Jewish ‘Trump fanatics’ were ‘making up’ some of the allegations of anti-Semitism in the party.

The ally of Mr Corbyn said he would ‘not be lectured to’ by Jewish supporters of the US President ‘making up duff information without any evidence’.

At a meeting of the NEC, he said: ‘I think we should ask the… rabbis: where is your evidence of severe and widespread anti-Semitism in this party?’

Mr Willsman was re-elected to his position on the NEC last September despite the controversy over his comments. Miss Mendick celebrated his victory, writing that it meant ‘the membership are fully behind Corbyn and aren’t buying the smears’.

It is understood that Miss Mendick, who is Jewish, will work in the Leader’s Office one day a week in the role. A Labour source said she is ‘absolutely committed to rebuilding trust with the Jewish community’.