A Labour candidate has told her would-be constituents she cannot bring herself to ask for their votes because of the party’s anti-Semitism crisis.

Carolann Davidson, who is standing in East Renfrewshire, told a hustings she has been ‘horrified’ at Jeremy Corbyn’s failure to root out racism.

Her bombshell intervention adds to Labour’s stack of anti-Semitism woes, which piled higher today when another candidate was axed for anti-Jewish Facebook comments.

And in a extraordinary week which saw Mr Corbyn refuse to apologies to British Jews after being declared ‘unfit for office’ by the chief rabbi, Ms Davidson concluded she can no longer ‘defend the indefensible’.

In a stinging tirade against Mr Corbyn, she told a hustings audience last night: ‘I know for almost everyone here, that I can’t stand here and ask for your vote. I’m not going to, because we don’t deserve it,’ according to Politics Home.

‘Labour has totally failed, from the leadership down, about anti-Semitism. So I’m not here asking for your vote, so you’ll say why are you here as a Labour candidate?

‘I want to reassure you as a community that there are still people within the Labour party who are not willing to surrender the party, that was once the strongest ally of the Jewish Community, to racists and conspiracy theorists.’

Ms Davidson is still standing to be the MP in the Scottish constituency, as she sought to reassure voters she is ‘on their side’ in trying to stamp out anti-Semitism. 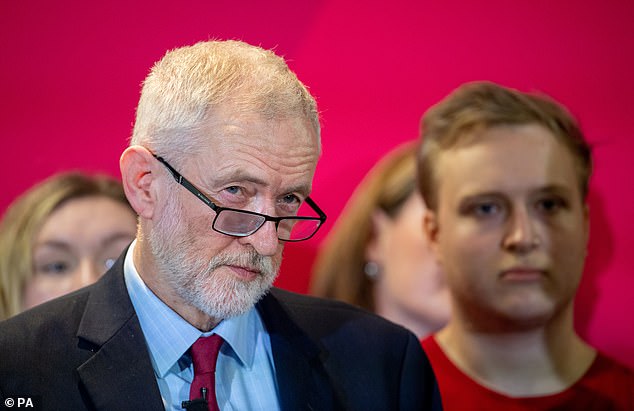 Her bombshell intervention adds to Mr Corbyn’s stack of anti-Semitism woes, which piled higher today when another candidate was axed for anti-Jewish Facebook comments.

Her astonishing remarks came as a Labour MP hopeful was sacked over allegations she posted anti-Semitic material on social media.

Safia Ali, Scottish Labour’s candidate in the seat of Falkirk, is understood to have posted comments on Facebook which prompted party officials to remove her.

It leaves the Falkirk constituency with no official Labour candidate at the general election on December 12.

The party said it ‘deeply regrets’ that Ms Ali was selected as its candidate but declined to go into specifics about the allegations. 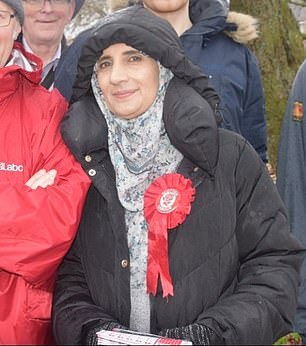 Safia Ali has been axed as Labour’s candidate in Falkirk

A Labour spokesman said: ‘Safia Ali is no longer the Labour Party’s candidate for Falkirk.

‘We have taken immediate action on this matter. We deeply regret Safia Ali was selected.’

The SNP is defending a majority of less than 5,000 votes this time around with Labour having finished in second place two years ago.

The deadline for submitting election candidates is long passed which means there will now not be a Labour candidate contesting the seat, making the SNP’s path to victory much clearer.

Michael Sharpe, Scottish Labour general secretary, said: ‘I deeply regret the people of the Falkirk constituency will no longer have a Labour candidate to campaign and vote for on December 12.

‘There is no place for anti-Semitism, or any form of racism and bigotry, in our party.

‘That is why Labour is taking robust action to root it out of our movement and wider society.

‘The Party has significantly strengthened our procedures, with swift suspensions, new processes for rapid expulsions and an education programme for members.

‘While I cannot go into details about individual cases, I can confirm that the party has acted immediately and decisively to remove this candidate.’

The decision to axe Ms Ali comes in a week in which Labour’s long-running anti-Semitism crisis has worsened.

He also alleged that Labour’s claims it is doing everything possible to tackle anti-Jewish racism was a ‘mendacious fiction’.

Mr Corbyn then repeatedly refused to apologise for the party’s handling of the issue during a car crash TV interview with the BBC’s Andrew Neil.

Labour remains under investigation by the Equality and Human Rights Commission over its handling of allegations of anti-Semitism.