Emily Thornberry today delivered a grovelling apology to the SNP after sparking a backlash for saying she ‘hates’ the party.

The Labour leadership challenger made the comment at a hustings event last week and provoked fury from the party as she labelled its members ‘Tories wrapped up in nationalist clothing’.

Today she tried to rebuild bridges with the SNP as she said sorry to the party’s MPs in the House of Commons while taking part in a debate on Donald Trump’s proposed Middle East peace plan.

She said: ‘Before I begin, could I take a brief moment to apologise to my colleagues on the SNP benches for the language I used in the heat of hustings last week.

‘When we are debating the Middle East, it is a salutary reminder to me both that there is no place for hatred in our politics and also that on almost every foreign policy issue including this one we have opposed the Tory government together and I am sorry for what I said.’

Ms Thornberry had told the hustings event: ‘I hate the SNP. I think they’re Tories wrapped up in nationalist clothing. I think they pretend to be on the Left.’

One of the party’s frontbenchers, Pete Wishart, tweeted: ‘A full apology from Emily Thornberry for her “I hate the SNP” comment. Just made in the chamber.

‘Good to see senior MPs put their hands up when they get the tone so badly wrong.’

Fellow frontbencher Stewart McDonald said he had ‘heartily accepted’ the apology and had ‘even invited Emily Thornberry to be my plus one at tomorrow night’s SNP Burns Supper’ – an invitation the senior Labour figure had ‘even threatened to accept’.

Ms Thornberry is one of four candidates still in the race to replace Jeremy Corbyn as leader of the Labour Party.

However, she is struggling to make an impact on the race. Sir Keir Starmer, Lisa Nandy and Rebecca Long-Bailey have all already secured a place in the final ballot of party members. 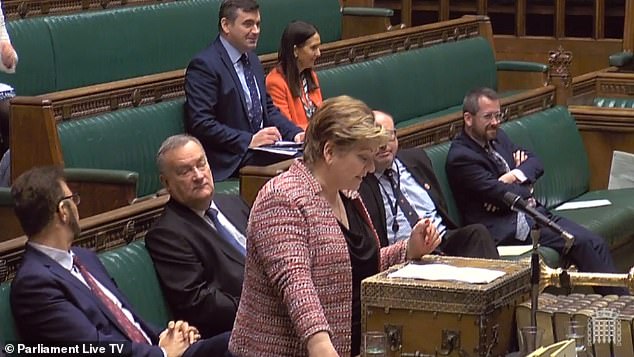 But Ms Thornberry has so far failed to win the backing of any of the major unions which means she will likely have to win the support of dozens of constituency Labour parties if she is to progress.

To make it onto the ballot paper candidates need to win the nominations of 33 CLPs or three Labour affiliates, including at least two trade unions.

The deadline for CLP and trade unions to endorse candidates is February 14 which gives Ms Thornberry two weeks to salvage her campaign.