Labour membership has ‘surged by 60,000 since general election defeat’ as leadership hopefuls deploy new campaign logos and slogans to win over activists as battle to replace Jeremy Corbyn heats up

Such a surge in the party’s rank and file is likely to be welcomed by moderate leadership candidates fighting to replace Jeremy Corbyn.

Moderates believe a wave of new members could boost the chances of taking back control of the party from hard left activists who joined in large numbers to support Mr Corbyn.

It came as the five remaining leadership candidates tried to energise their respective bids for the top job by launching campaign logos and slogans.

Jess Phillips, pictured in Glasgow yesterday, is one of five candidates in the race to replace Jeremy Corbyn 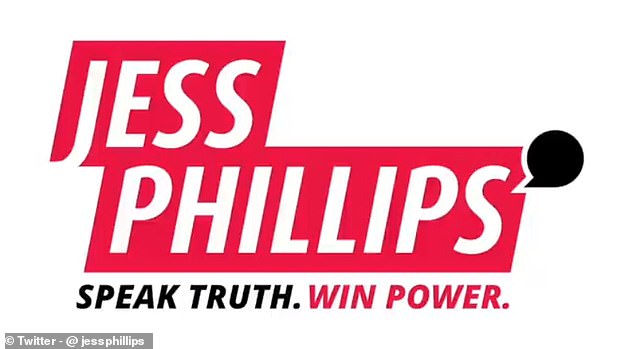 Ms Phillips, the Labour MP for Birmingham Yardley, is campaigning on a slogan of ‘Speak Truth. Win Power.’

Ms Long-Bailey last night tweeted a link to her website urging people to sign up to back her campaign which has the slogan ‘our path to power’.

She said: ‘I’m standing to be the leader of the Labour Party because our path to power lies in taking on the political establishment with a commitment to democratising and decarbonising our economy.’

Ms Thornberry is standing on a slogan of ‘fighting back together’, Sir Keir has chosen ‘another future is possible’ and Ms Nandy has opted for ‘we win together’.

The five candidates all made it into the second stage of the leadership contest after they managed to secure the support of at least 22 MPs.

They now must win trade union backing or gain support from constituency Labour parties in order to make it onto the final ballot.

They all have until February 14 to win the backing of either three Labour affiliates constituting at least five per cent of all affiliated members or at least 33 local parties. 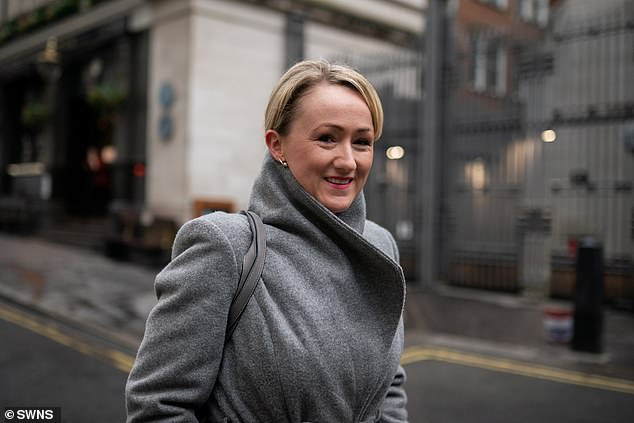 Rebecca Long-Bailey, pictured in Westminster, is viewed as the ‘continuity Corbyn’ candidate in the leadership race 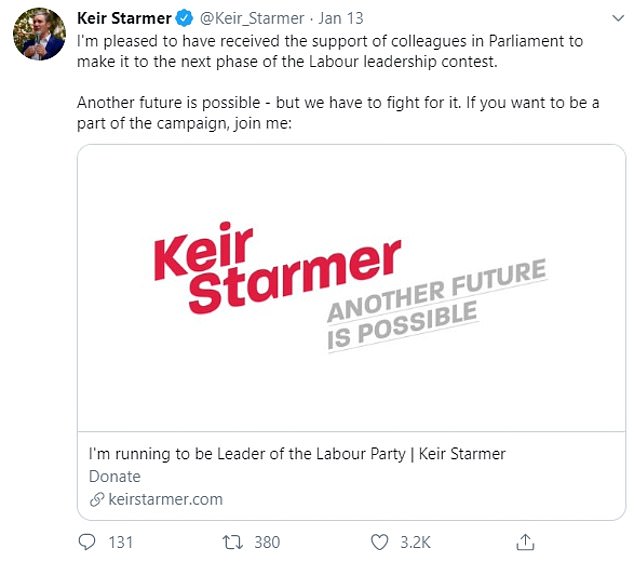 Sir Keir Starmer, the frontrunner in the race to replace Mr Corbyn, is running on a slogan of ‘another future is possible’

The Sun reported that Labour’s membership has increased by 60,000 since December 12 when the party sank to just 202 MPs.

Moderates are hoping that members who left the party under Mr Corbyn are now returning to the fold to help shift Labour’s direction. That could propel the likes of Sir Keir or Ms Phillips to victory.

Meanwhile, candidates are now scrambling to persuade people to join the party as a registered supporter by tomorrow’s 5pm deadline. It costs £25 and enables people to vote in the contest.

Anyone who goes the full membership route has until next Monday to join and be eligible to vote for Mr Corbyn’s successor.