A Labour MP has called in police after internet trolls sent her vile messages, including one saying she should be ‘raped by 100 Muslims’.

The disgusting comments come after the politician called for more to be done to stop MPs being threatened and abused on social media.

MP Cat Smith has been sent vile messages through Facebook, saying she should be raped

One of the messages said: ‘Hope she gets raped then,’ and another said: ‘She should be raped by 100 Muslims stupid b****.’

Newly-married Ms Smith, 32, told the Blackpool Gazette: ‘I have talked to the police and they seem optimistic they can trace these people.

‘But I’m just angry that social media companies do not take their responsibilities seriously enough when it comes to this sort of thing.

‘I reported these posts to Facebook, but they said they did not breach their rules.’ 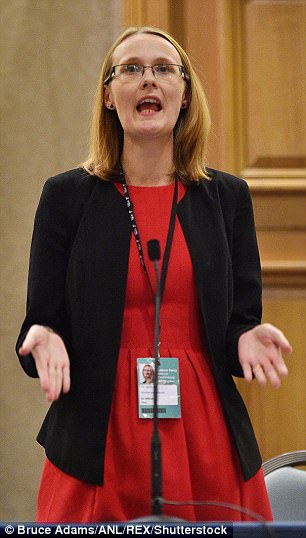 Ms Smith said she had reported ‘numerous’ posts to social networks in the past, but this was the first time she had brought in the police.

She added: ‘The reason I flagged them up this time was my frustration about social media companies not taking their responsibilities seriously.

‘I’m angry that it is considered OK by a minority of people.

‘Some people seem to think it’s part of the job. They feel that if you are in a public role then you should expect it.

‘Well I don’t think anyone should expect that, regardless of whether they are in public life or not.

‘You wouldn’t dream of saying that to someone in the street, yet it’s somehow OK to say it on social media.’

On Thursday MPs are set to debate the abuse politicians, especially during elections.

In January Ms Smith wrote of her increasing concern over the behaviour and language of online trolls.

‘Not only can trolling have damaging consequences for individuals but also for democracy itself.

‘Some politicians are extremely cautious about engaging with their constituents on online platforms.’

In July, it was revealed one Tory MPa day was being threatened by online trolls – including threats to ‘maim and kill’.

Simon Hart, a Conservative backbencher, called for ministers to offer more protection for members of the public who are standing for public office.