A Labour MP candidate has claimed she had her drink spiked and was raped in a ‘politically motivated attack’.

Emily Owen, 25, who is the Labour candidate in the North Wales seat of Aberconwy, said she had not reported the alleged attack to the police.

But she decided to go public with the allegations after left-wing commentator Owen Jones was attacked outside a London pub in August.

Ms Owen said that had proved to be the ‘tipping point’ and now she wanted to ‘stand up and be counted’ and speak out against the ‘horrific abuse’ – both verbal and physical – which politicians and commentators now face on a ‘daily’ basis.

Writing on her Facebook page, she said: ‘Last year I was spiked and raped in a politically motivated attack.

‘I have battled with myself for a few months as to whether to tell my story.

‘This isn’t to play the victim, get sympathy or even support – it’s to raise a very important point and comes on the back of Owen Jones being attacked on a night out simply for being himself.’

Emily Owen, pictured with Jeremy Corbyn, said she was spiked and raped in a ‘politically motivated attack’ last year 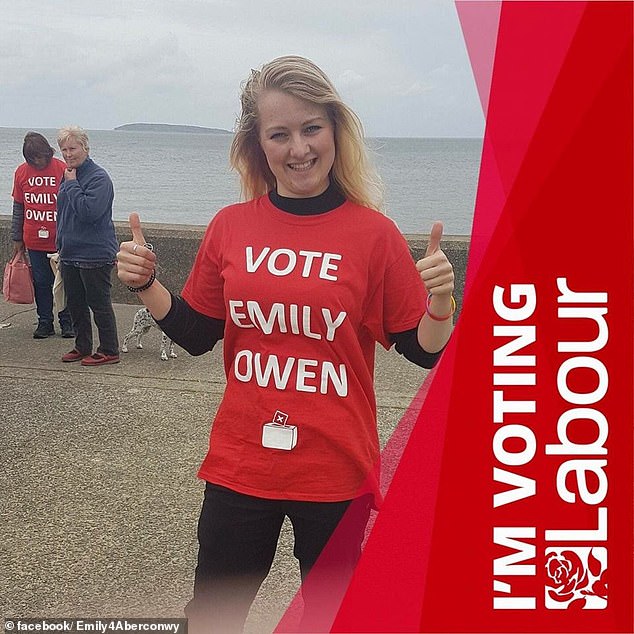 Ms Owen is the Labour Party candidate in the north Wales seat of Aberconwy. She finished second at the 2017 general election

Ms Owen said the abuse faced by people in the public eye was ‘absolutely not acceptable’ and that people should be able to disagree politically ‘without being physically/verbally abusive and vile’.

The 25-year-old said when she was allegedly attacked last year it was ‘made clear to me that my attack was politically motivated’.

She said she had decided not to report the alleged incident to the police for ‘numerous reasons’ and that the decision was not taken ‘lightly’.

Describing recovery as a ‘process’ she said she had ‘turned my anger into forgiveness of my rapist’.

However, she said there were ‘some sets of people I can’t forgive’ as she claimed there were ‘thousands of people who are being attacked every day by the far right for simply being themselves’.

‘I will not sit by and allow that to happen,’ she said.

‘For the first time in our history, we have a Prime Minister whom the far right regard as their leader.

‘People are being attacked in the street, threats on social media are increasing, hate speech is now common and there is a real feeling of unease throughout the country. Make no mistake, this movement is real and it’s happening now.

‘Our leaders can no longer dismiss it as irrelevant and if they do we must rise together to put a halt to it.’

Ms Owen said that people with ‘public platforms’ who hold ‘progressive views’ now put ‘themselves and their loved ones at risk’ by setting out their beliefs in the open. 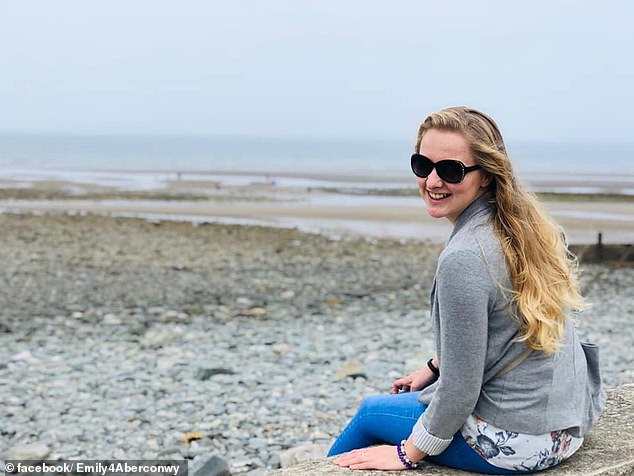 She then urged Boris Johnson to ‘show some real leadership’ and ‘stop fuelling hatred’ by making ‘ridiculous remarks about Muslims’.

She ended her statement on Facebook by urging people to work together to ‘get Boris out of office’.

Ms Owen spoke out in 2017 after she received inappropriate and ‘very explicit’ messages online after she became a first-time candidate.

She finished second in the Aberconwy seat at the 2017 general election as the Tories held onto the constituency with a 635 vote majority.

A Welsh Labour spokesman said: ‘Emily has consistently spoken out against the sexism and misogyny she has encountered, including in the media, as a candidate. No woman should face such abuse.

‘Her story will resonate with many and we are united in working for a politics and a society that is inclusive and safe for all women.’