David Lammy has been criticised for getting the time of the two-minute silence wrong by 11 minutes.

The Armistice of November 11, 1918 marked the end of fighting on the Western Front  in World War I, and a day of remembrance takes place on the date’s anniversary every year – with a two-minute silence honoured at 11am.

But Mr Lammy, the Labour MP for Tottenham and a former Minister for Higher Education, posted a message on Twitter proclaiming that 11.11am was the moment to remember ‘when the sounds of war fell silent’.

‘We must never forget out soldiers’ immense sacrifice or the brutal realities of war. #RemembranceDay2018 #Armistice100.’

The tweet drew furious reactions from social media users, who pointed out that Mr Lammy appeared to have gotten the time for the silence wrong.

Andrew Neil responded directly to the tweet, which is no longer available and appears to have since been deleted, saying: ‘I fear you’re 11 minutes late.’ 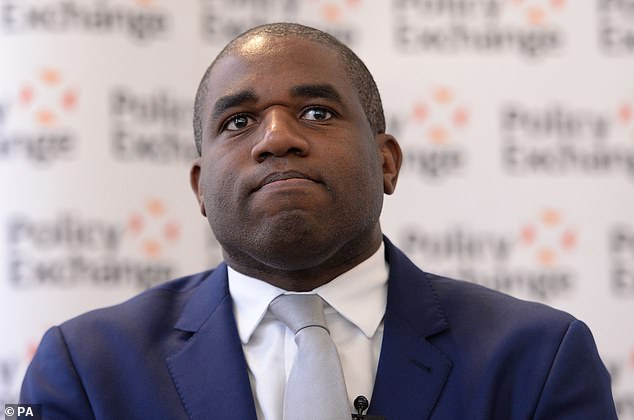 Mr Lammy’s tweet drew furious reactions from social media users, who pointed out that the silence takes place at 11am 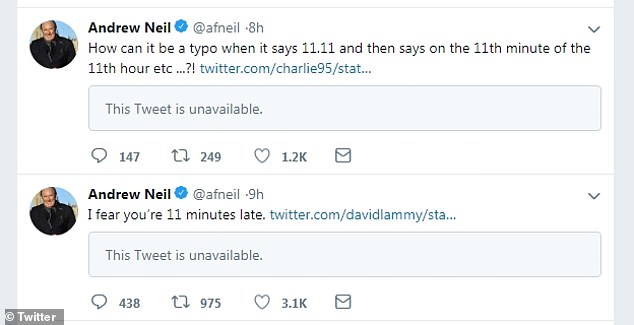 BBC presenter Andrew Neil responded to the tweet, which is now unavailable and appears to have been deleted, saying: ‘I fear you’re 11 minutes late’

One Twitter user responded to Mr Neil’s tweet, saying it was ‘clearly a typo’, and the BBC presenter then tweeted: ‘How can it be a typo when it says 11.11 and then says on the 11th minute of the 11th hour etc …?!’

Mr Lammy served as a minister under the premierships of Tony Blair and Gordon Brown, and has held his north London constituency since 2000.

Another said: ‘David Lammy deleted his tweet which also thought we fall silent a 11.11am. Its the 11th HOUR of the 11th DAY of the 11th Month! Reminiscent of Diane.’

A profile under the name Alan Tongue said: ‘11.11? Good grief. Who was your history teacher?’