A Labour MP has revealed that a man has been arrested today for trying to ‘kick the door’ of her constituency office and reportedly calling her a ‘fascist’.

Jess Phillips, 37, who represents Birmingham Yardley, said staff had to be locked inside her office as the man tried to smash his way inside.

She told LBC Radio: ‘I’ve only just heard about it myself but my staff had to be locked into my office while the man tried to smash the windows and kick the door, I believe.

‘I don’t know what I can say because the man has been arrested.’

Jess Phillips (pictured in the House of Commons), who represents Birmingham Yardley, said the man also shouted that she was a fascist

It comes after Furious Labour MPs demanded Boris Johnson apologise after he said the ‘best way to honour the memory’ of Jo Cox is for Parliament to ‘get Brexit done’ as John Bercow condemned the ‘toxic’ House of Commons.

The Prime Minister had also claimed the ‘best way’ for MPs to stay ‘properly safe’ is for them to help him deliver the UK’s departure from the European Union on October 31.

Ms Phillips told Sky News that she would not ‘leap to blame Boris Johnson for this attack’.

She added: ‘We need to all be better and he is the Prime Minister. I wish he would just instead of trying to divide, to try to lead. I think that’s what the country wants to see.’

She said everyone in Parliament had a ‘case to answer’ regarding their conduct, but that the only one with a ‘specific strategy’ to provoke hate and aggression in the country was Mr Johnson.

‘What he is doing is not human. It is manipulative, it is purposeful, it is his strategy. He wants people like me to be under threat,’ she said. 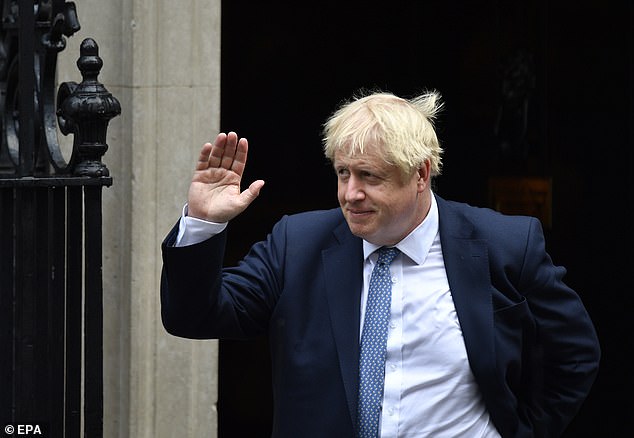 Boris Johnson, pictured in Downing Street today, responded to concerns about the safety of MPs in the Commons last night by saying ‘humbug’

Following Mr Johnson’s comments yesterday, Ms Phillips yesterday said: ‘The use of language yesterday and over the past few weeks such as the surrender bill, such as invoking the war, such as betrayal and treachery, it has clearly been tested, and work-shopped and worked up and entirely designed to inflame hatred and division.’

She added: ‘It is not sincere, it is totally planned, it is completely and utterly a strategy designed by somebody to harm and cause hatred in our country.

‘When I hear of my friend Jo Cox’s murder and the way that it has made me and my colleagues feel, and feel scared, described as humbug, I actually don’t feel anger towards the Prime Minister, I feel pity for those of you who have to toe his line.’

Ms Phillips also tweeted today that she had received an ‘anonymous letter’ to her constituency office which read: ‘It was rather prophetic that Boris Johnson should say: “I would rather be found dead in a ditch.”

‘That is what will happen to those who do not deliver Brexit.’

Ms Phillips said: ‘@10DowningStreet might think we are “humbugs” about his words but they are literally being used in death threats against me.’

Last night’s debate in the Commons had exploded into acrimony after Mr Johnson appeared to dismiss MPs’ safety concerns as ‘humbug’ as he repeatedly referred to an anti-No Deal law passed by Parliament earlier this month as the ‘Surrender Act’.

Members of Mr Johnson’s Cabinet also hit out at the remarks as Culture Secretary Nicky Morgan said politicians needed to remember their words had an impact and Commons Leader Jacob Rees-Mogg said everyone must be ‘mild in our language’.