Labour MPs round on Corbyn over anti-Semitism

Two women Labour MPs put Jeremy Corbyn to shame last night as they detailed vile abuse at the hands of his supporters.

On a devastating day for the Labour leader, Jewish MPs Luciana Berger and Ruth Smeeth read out examples of the shocking abuse they have received from activists for highlighting the party’s anti-Semitism crisis.

In an emotionally charged debate on anti-Semtism, which shredded Mr Corbyn’s remaining authority, MPs on all sides broke with convention to give the pair standing ovations in the Commons. Some MPs were reduced to tears by their harrowing stories. 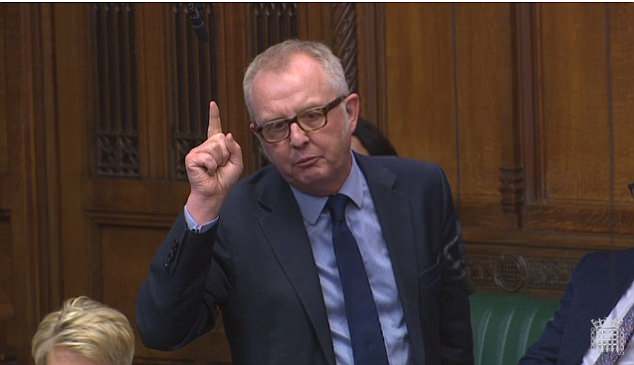 Ian Austin (pictured in Parliament today) said the former London Mayor should be ‘booted out’ of the party for saying Hitler supported Zionism.

Miss Smeeth said she had received thousands of abusive messages on social media, many of them from people claiming to be supporters of the Labour leader.

One read: ‘The first job for Jeremy Corbyn tomorrow: expel the Zionist b**** Ruth Smeeth from the party.’ Another said: ‘Hang yourself you vile treacherous Zionist Tory filth, you’re a cancer of humanity.’

She said: ‘I’ve been the target of abuse from people who say I have no place in the party I have been in for 20 years.’

Miss Berger also said she had received abuse at the hands of people using the hashtag JC4PM (Jeremy Corbyn for prime minister).

She said: ‘It is anti-Semitism of the worst kind; suggesting that I’m a traitor to our country, they have called me ‘Judas’, a ‘Zio-Nazi’, an ‘absolute parasite’, telling me to ‘get out of this country and to go back to Israel’.

‘My party urgently needs to address this issue publicly and consistently. We have a duty to the next generation. Denial is not an option. …The time for action is now. Enough really is enough.’ 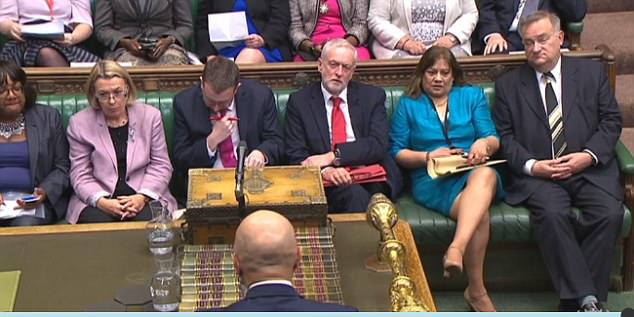 The Labour leader shook his head with his arms crossed as he Communities Secretary Sajid Javid attacked him for failing to confront the racism.

In an extraordinary demonstration of the growing schism in Labour, the party’s deputy leader Tom Watson abandoned his seat on the front bench alongside Mr Corbyn to sit in solidarity with Miss Berger and Miss Smeeth.

The three-hour debate saw a string of Labour MPs stand up to condemn Mr Corbyn’s failure to tackle a problem Miss Smeeth said was ‘engulfing’ sections of the party. Many called for Mr Corbyn’s ally Ken Livingstone to be ‘booted out’ of the party for claiming Hitler was a Zionist.

John Mann, chairman of the all-party group on anti-Semitism, said Jewish people were ‘scared’ to be in the party and revealed his wife had been sent a dead bird through the post, and that she had been threatened with rape.

‘I didn’t expect when I took on this voluntary cross-party role for my wife to be sent by a Labour Marxist anti-Semite a dead bird through the post,’ he said. 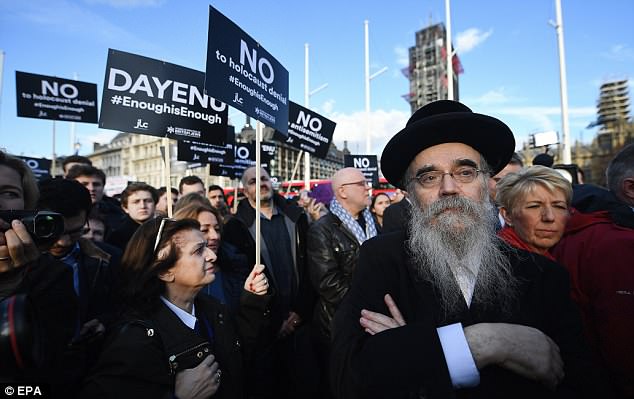 Hundreds gathered at the ‘enough is enough’ protest called by Jewish leaders outside parliament last month (pictured) – but Labour MPs who attended it were later deluged with hate mail and deselection threats by Corbynistas.

In extraordinary scenes in the Commons, Labour MPs condemned their leadership’s failure to root out anti-Semitism.

And many told of the abuse they received for daring to speak out.

Here is some of what they said:

John  Mann, Labour MP for Bassetlaw and chairman of the all party group against anti-Semitism:

‘I didn’t expect my son after an Islamist death threat to open the door in the house on his own as a schoolboy to the bomb squad.

‘I didn’t expect my wife, in the last few weeks from a leftist anti-Semite in response to the demonstration, to be threatened with rape.

‘I didn’t expect my daughter similarly, and have to be rung up in the last few weeks by special branch to check out her movements in this country.’

‘My party urgently needs to address this issue, publicly and consistently and we need to expel those people from our ranks who hold these views – including Ken Livingstone.’

‘I stand here today to say that we will not be bullied out of political engagement, we are going nowhere and we stand and will keep fighting until the evils of anti-Semitism have been removed from our society.’

‘Let’s be really clear about it: Ken Livingstone comparing, claiming, that Hitler was a Zionist – this is anti-Semitism pure and simple, happened more than two years ago, there has been ample time to deal with it.

Labour grandee Dame Margaret Hodge said she had ‘never felt as nervous and frightened as I do today’ about being Jewish.

Mr Corbyn has come under extreme pressure to tackle anti-Semitism and will meet representatives of Jewish groups next week. A BMG poll for the Independent last night found 61 per cent of people think Labour has an anti-Semitism problem, with more than half saying Mr Corbyn is handling it ‘badly’.

The Labour leader did not speak during yesterday’s debate. But as Communities Secretary Sajid Javid opened yesterday’s debate he could be seen muttering angrily under his breath. Several Labour MPs directly criticised Mr Corbyn’s handling of the crisis, with Ian Austin saying he needed to ‘take this much more seriously’.

Mr Austin said he was ‘deeply ashamed’ of the situation. He said Mr Corbyn had a track record of defending anti-Semitic groups like Hamas and had opposed the removal of a ‘grotesque’ anti-Jewish mural. He urged him to eject Mr Livingstone from the party, saying it was ‘a disgrace’ the former London mayor had not yet been ‘booted out’ of the party. Many of the most powerful interventions came from female MPs, some of whom have needed police protection after receiving death threats.

Dame Margaret described how she had seen a battered suitcase with her uncle’s initials on it when she visited Auschwitz as she warned against forgetting the lessons of the past. ‘Anti-Semitism is making me an outsider in my Labour party. Enough is enough.’

Mr Javid said Mr Corbyn had ‘too many accidental associations’ with anti-Semitism to list.

He also warned that there has been a spike in ‘dinner party anti-Semites’ – respectable middle-class professionals who secretly harbour a hatred of Jews. ‘We cannot and must not ignore the particular concern with elements within the Labour party,’ he said.

Mr Corbyn leader faced criticism after walking out of the debate, missing the speeches by Miss Smeeth and Mr Mann, although he later returned. 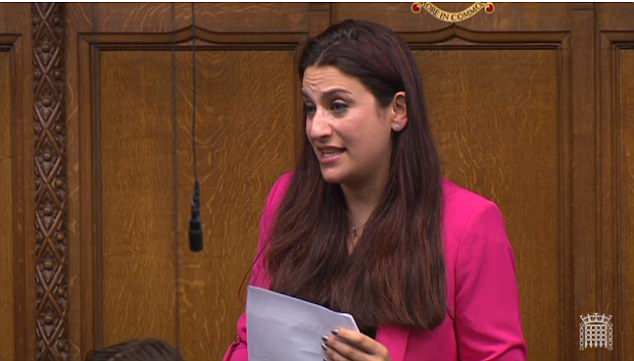 Luciana Berger, a Labour MP for Liverpool Wavertree (pictured in Parliament today)told how she has been inundated with anti–Semitic abuse – and that it is ‘on the rise’ in the party saying ‘it is more conspicuous and it is more abrasive’. 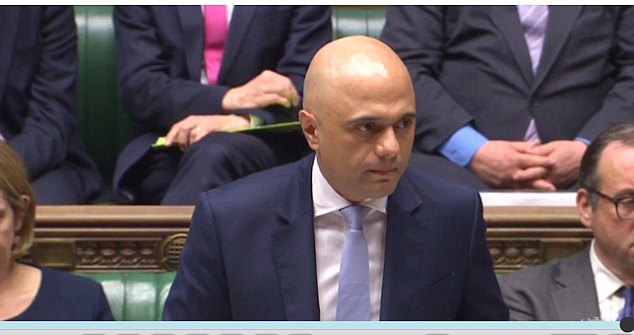 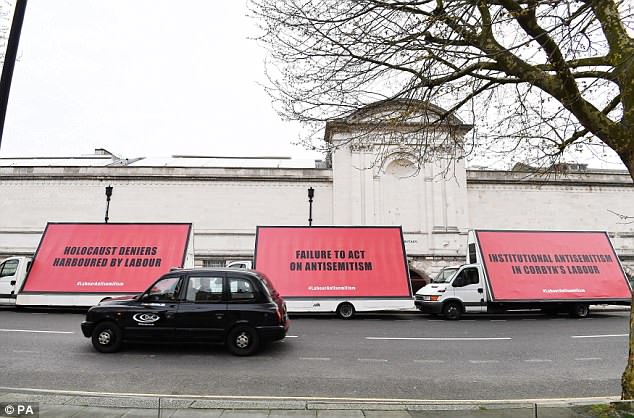 Jeremy Corbyn faced a rebellion by dozens of Labour MPs last night after he launched a failed bid to limit the Prime Minister’s power to order military action.

More than 50 Labour MPs ignored Mr Corbyn’s orders to join him in a symbolic vote against the Government last night in protest at Theresa May’s failure to consult Parliament before ordering air strikes against Syria. The Labour abstentions helped the Government avoid a Commons defeat by 317 votes to 256.

Mr Corbyn called yesterday’s emergency debate to make the case for a new War Powers Act which would make it all-but impossible for future prime ministers to order military action of any kind without the approval of Parliament.

He said Mrs May had shown a ‘flagrant disregard’ for the convention that military action should normally be approved in advance by MPs. And he said new legislation could ‘specify at what point in decision-making processes MPs should be involved, as well as retaining the right of ministers to act in an emergency or in the country’s self-defence’. But the Prime Minister defended her decision to act without seeking approval, saying that coming to the Commons beforehand would have compromised the ‘effectiveness of our operations and safety of British servicemen and women’.

And she said a War Powers Act would mean smaller-scale and targeted military action such as that over the weekend in Syria ‘would become unviable’.

Mrs May said that Parliament should have the right to vote on full-scale military action like the invasion of Iraq. But she said the government had to be free to order more limited action quickly. Former Labour frontbencher Heidi Alexander said she believed the Government should have the right to retain flexibility to act without recourse to Parliament, and said: ‘Had I been in the Prime Minister’s shoes last week, I think it is likely that I would have chosen a similar course.’

Only 205 of Labour’s 259 MPs obeyed Mr Corbyn’s order to vote against the government. One rebel said it was wrong to ‘play games’ with the issue.

Tory MP Andrew Bridgen drew laughs with a sideswipe at Mr Corbyn, suggesting the Labour leader would not authorise military action even if the Isle of Wight were invaded.

In the run-up to last weekend’s air strikes some Tory MPs urged Mrs May to recall Parliament to debate the issue. Tory grandee Sir Edward Leigh yesterday said the power to act without parliamentary approval ‘should be used on as few occasions (as possible), if at all’. But no Tory MPs voted with Mr Corbyn.