Labour hits the panic button: John McDonnell rushes out £58BILLION pledge to help women who ‘lost out due to changes in state pension age’ – but admits it was NOT costed in the manifesto and the government will have to borrow the money

Labour hit the panic button today as John McDonnell rushed out plans to hand £58billion to women who believed they lost out financially due to changes in the state pension age.

The shadow chancellor unveiled the huge sum with a series of polls suggesting the party’s hard-Left programme has been falling flat with voters.

But he faced questions over why the big-ticket measure was not included in Labour’s manifesto, which was only published on Thursday.

Mr McDonnell made clear that the move will be funded from borrowing – meaning it will add to the country’s debt pile.

The head of the respected IFS think-tank, Paul Johnson, said: ‘This drives a coach and horses immediately through the manifesto pledge to get to current budget surplus to remain at current budget balance.’

The compensation would be due to an estimated 3.7million women who believed they lost out financially due to changes in the state pension age.

The so-called ‘Waspi women’ have argued they were given insufficient time to prepare for the changes brought in by the former coalition government.

They have already lost a legal challenge on the issue – but are mounting an appeal.

Labour said the payout could amount to an eye-watering £58billion over five years – with individual payments averaging £15,380 running to a maximum of £31,300- if Labour gains power in the election.

Speaking on Sky News’ Sophy Ridge on Sunday, Mr McDonnell insisted the spending was ‘outside’ the ‘scorecard’ that costed the manifesto commitments.

‘This is a very special arrangement, a contingency, in the same way that government has in the past dealt with matters like this,’ he said.

‘The scale of this injustice is enormous, this is a discrimination against women in particular, older women, many of whom are on low pay anyway but now I think many of them have suffered so it’s an injustice we have to address.’

Mr McDonnell insisted Labour had been ‘working on this for the last 18 months’.

But Ridge pointed out that the manifesto also made no mention of costs for plans to introduce a four day working week – which experts have warned could leave the NHS with a massive staffing bill.

There were also no costs for a £400billion infrastructure ‘transformation fund’, nationalising a swathe of industries – including broadband – and scrapping the state pension age increase.

Mr McDonnell said: ‘What this book does, it sets out our manifesto commitments, costed and with funding sources.’

One Cabinet minister told the Sun: ‘Splurging £58bn on a Sunday morning after your own manifesto launch is a clear sign of a campaign in panic mode.’

Boris Johnson was challenged by one of the women in the studio audience for Friday night’s BBC Question Time special.

The Prime Minister said that while he sympathised deeply, he could not promise to ‘magic up that money’ for them. 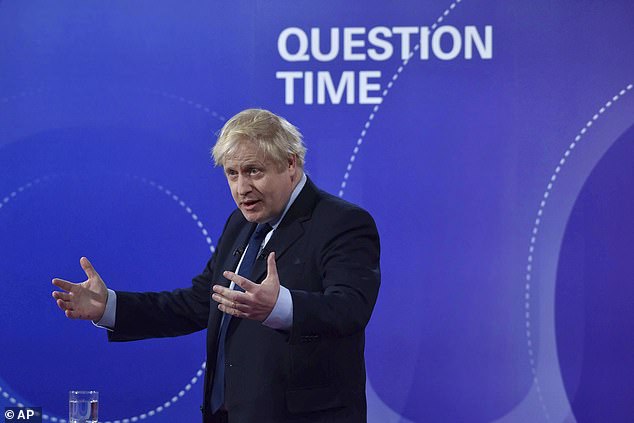