Lonzo Ball (No. 2) pictured in front of his mother Tina (in black) and father LaVar (in red) during a December game at Madison Square Garden in Manhattan

Following in the footsteps of Allen Iverson, Kobe Bryant, and Jason Kidd, Los Angeles Lakers rookie Lonzo Ball became the latest NBA guard to release a rap album, and as with everything concerning the Ball family, father LaVar is heavily involved.

Lonzo, whose rap moniker is ‘Zo,’ had been teasing the album in recent months, previously releasing four songs including ‘BBB,’ which is a reference to LaVar’s apparel company, Big Baller Brand.

Not only does the album ‘Born 2 Ball’ have an old picture of LaVar and a young Lonzo on the cover, but the 17th and final song is named after the controversial basketball dad.

Lonzo’s singer-songwriter friend Kenneth Paige helps out on the album, as Hip Hop N More reported, but the album does not contain any featured tracks from well-known artists.

This summer, Lonzo plans on traveling to do his first performance in Lithuania, where younger brothers LiAngelo and LaMelo currently play professionally. 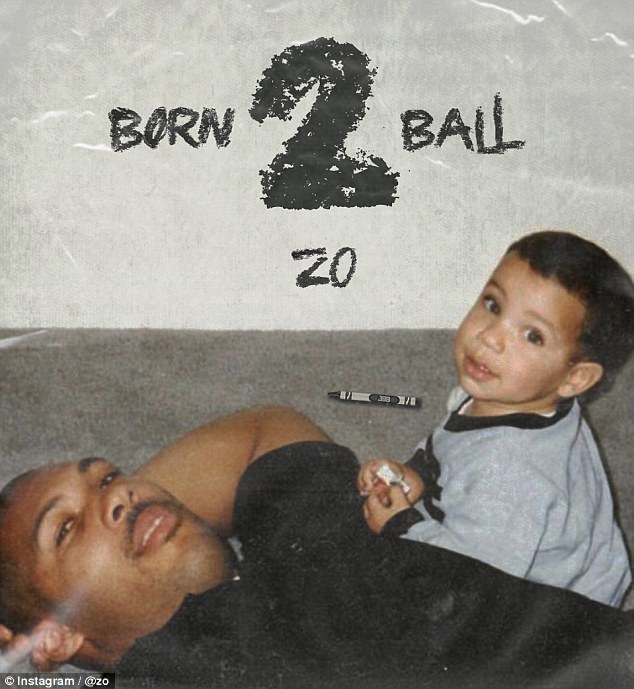 Lonzo is currently injured and will miss out on playing in this weekend’s NBA Rookie-Sophomore game during All-Star Weekend. Despite some shooting struggles, Lonzo Ball is having an impressive rookie season, recording 10.2 points, 7.1 assists and 7.1 rebounds a game for the 23-33 Lakers.

Currently LaVar’s latest mission is to see all three sons playing together some day, and he recently told Lithuanian reporter Donatas Urbonas.

‘I want all my three boys to play for the Lakers,’ said LaVar, a Southern California native who briefly played basketball at Washington State. ‘But if that does not happen, I’m telling you the story what’s gonna happen first. If they don’t take Gelo [LiaAngelo] this year, I bring Gelo here to play with Melo [LaMelo] for two years.

‘Lonzo will be on his third year and I want to let every NBA team know that Lonzo is not going to re-sign with the Lakers but will go to any team that will take all of my three boys,’ he said. ‘That’s my plan.’ 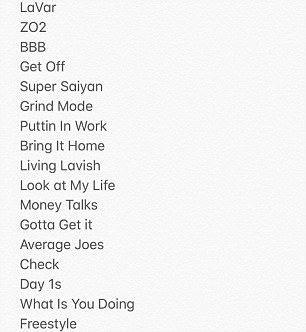 Some of the tracks on ‘Born 2 Ball’ include ‘BBB’ – a reference to the family apparel brand – and ‘LaVar,’ a song about Ball’s father

That ‘plan,’ as he calls it, could ultimately cost Lonzo dearly as the former UCLA star will only be a restricted free agent in three years.

So while he would be free to sign with any team that can fit him under the salary cap, the Lakers would have the right to match any offer and retain his services.

And while the Lakers could theoretically draft 19-year-old LiAngelo or 16-year-old LaMelo when they become eligible, they might not want to.

Unlike Lonzo, who was taken second overall in the June draft after a stellar freshman season at UCLA, LiAngelo is not considered an NBA prospect while the 16-year-old LaMelo is still developing physically.

Lonzo, for instance, was highly recruited before starring at UCLA and LaMelo made a name for himself by scoring 92 points in a high school game last season before being pulled out school by LaVar. 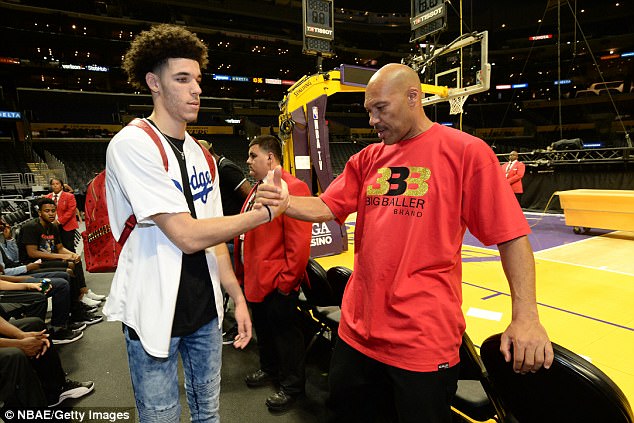 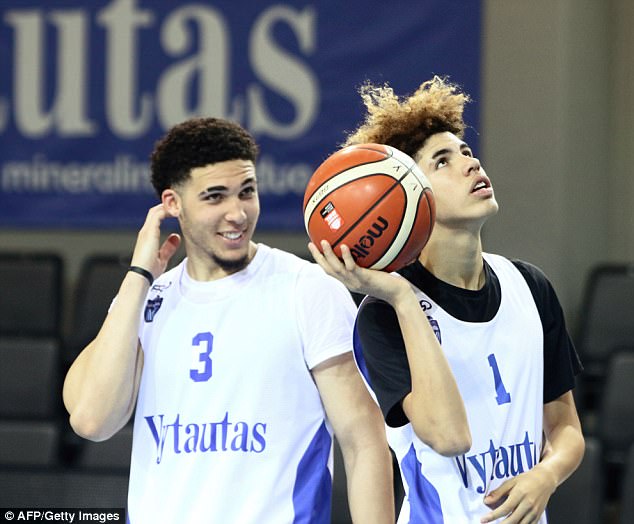 Considered the lowest-rated recruit of UCLA’s freshman class, the 6ft5 LiAngelo was given three out of five stars on ESPN’s college basketball recruiting page, which criticized his lack of lateral quickness and overall defense.

LiAngelo previously made national news while visiting China with his now-former UCLA Bruins teammates in November.

Along with fellow freshman Jalen Hill and Cody Riley, LiAngelo admittedly stole designer sunglasses from a Louis Vuitton store in Hangzhou, where the team was staying ahead of their season opener against Georgia Tech in Shanghai on November 10.

The three spent less than two days in jail before being released and eventually sent back to the United States on November 14.

Upon their arrival in Los Angeles, it was announced that all three would be suspended indefinitely by the School.

Feeling impatient, LaVar and LiAngelo announced the latter’s intention to pull out of the school so he can focus on preparing for the 2018 NBA Draft. 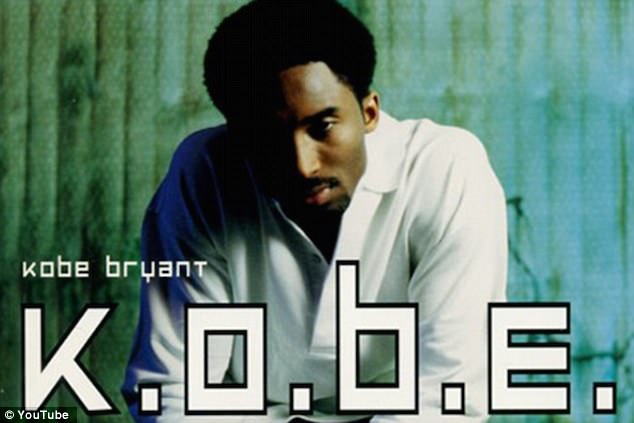 Lonzo Ball is not the first Lakers guard to put out an album. Retired Kobe Bryant released his own foray into the music world back in 2000 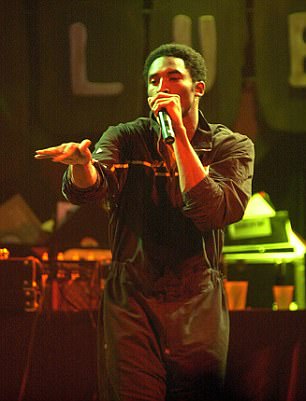 Kobe Bryant’s rap career did not take off

Unfortunately for LiAngelo, the NBA is not nearly as high on his potential as his brothers’. Lonzo, for instance, was highly recruited before starring at UCLA and LaMelo made a name for himself by scoring 92 points in a high school game last season before being pulled out school by LaVar.

Considered the lowest-rated recruit of UCLA’s freshman class, the 6ft5 LiAngelo was given three out of five stars on ESPN’s college basketball recruiting page, which criticized his lack of lateral quickness and overall defense.

‘He’s not on any of our scouting lists — even the extended lists,’ one NBA general manager told Wojnarowski.

LaMelo’s NCAA eligibility was already uncertain after LaVar decided to make a signature shoe for his youngest son with the his athletic apparel company, Big Baller Brand. The NCAA forbids players from signing endorsement deals and could have intervened if LaMelo ever attempted to play for the Bruins.

LaVar, however, has put the issue of LaMelo’s eligibility to rest.

The Ball’s Lithuanian team, Prienu Vytautas, plays in the Baltic League and is located in a small town of around 10,000 people in southern part of the country.