Disgraced cyclist Lance Armstrong claims that he once paid the tab for a group of six or seven patrons at a bar who were taunting him for having his Tour de France titles stripped due to doping.

Armstrong recounted the scene in part one of the two-part ESPN documentary series, ‘LANCE’, which premiered on Sunday.

The first episode began with Armstrong repeating the F-word while flipping the bird.

He then described an encounter which took place in Denver five years after it was revealed that he used performance enhancing drugs to win professional cycling races.

‘I was staying in this rental house. I called an Uber. He pulls up on the street right in front of the bar,’ Armstrong was quoted as saying by the New York Post.

‘We cross the street and this guy stands up and shouts, “Hey, Lance”.

Armstrong claims that he was then accosted by more hecklers.

‘The next thing you know, he’s with six or seven people and they all stand up and start going, “F*** you! You f*****g cheater”,’ Armstrong said.

The former cyclist was with a friend who was worried that he would become violent.

‘She’s thinking I’m about to walk over there and punch the s*** out of this guy,’ Armstrong said.

‘Which would have obviously been a bad idea.’

Instead, Armstrong decided to take the high road.

‘I called the bar. Here’s my credit card number,’ he said. 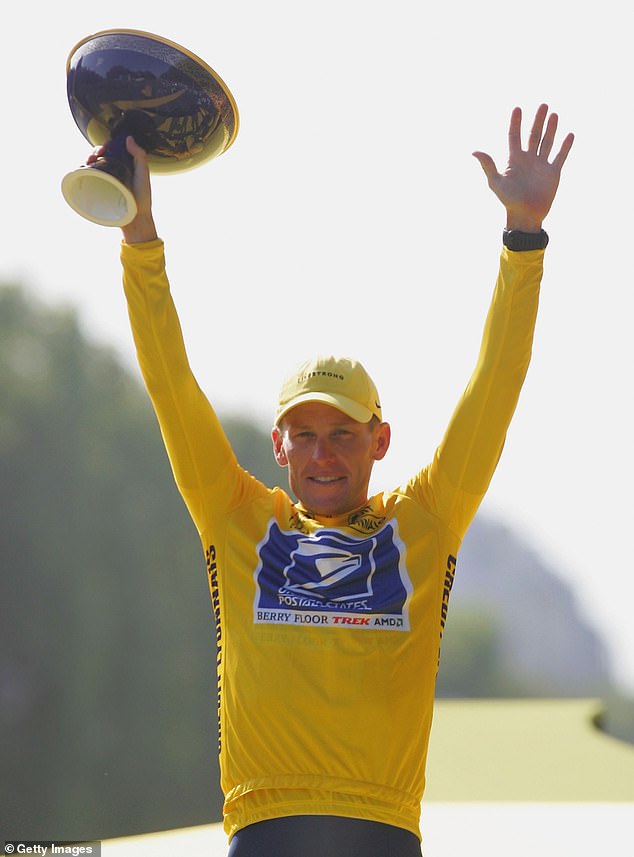 Armstrong was stripped of all seven Tour de France championships after it was learned he was taking performance-enhancing drugs. He is seen above after winning the title in Paris in 2004

‘Under one condition. You have to say, “Guys, Lance took care of everything. And he sends his love”.’

The moment was one of several intriguing revelations about Armstrong, who has gone from a figure who was once universally beloved for coming back from cancer to win multiple Tour de France titles to being widely loathed for his cheating.

Armstrong revealed in the ESPN documentary that his stepfather, Terry Armstrong, was ‘kind of terrible’ because he ‘just beat the **** out of me.’

Lance Armstrong describes how his stepdad once punished him for leaving his drawer open.

‘Sure enough, I would leave a drawer open, and he would pull out his fraternity paddle and just beat the **** out of me,’ Lance Armstrong said.

Terry Armstrong said he treated his stepson ‘like an animal’ and used corporal punishment to harshly discipline the young Lance.

‘Lance would not be the champion he is today without me, because I drove him,’ Terry Armstrong said.

‘I drove him like an animal. That’s the only thing I feel bad about. 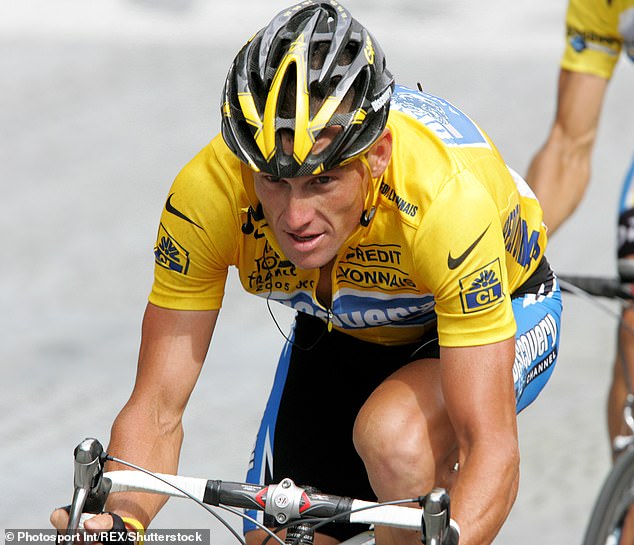 Armstrong is the subject of a two-part documentary series, Lance. The first part aired on Sunday

The documentary paints Armstrong as a complicated figure. Viewers learn that his mother, who gave birth to the cyclist when she was just 17 years old, was in an ‘abusive relationship’ with his biological father.

Lance Armstrong’s father, Eddie Gunderson, left the family home when the boy was an infant. Gunderson died in 2012, according to USA Today.

His mother then married Terry, who said he went on to adopt Lance when the boy was just three years of age.

Lance was given Terry’s last name.

‘I was already establishing myself and my career and brand or whatever that means,’ Lance Armstrong said.

‘I like the name Lance Armstrong. I think that’s a good name.

Terry Armstrong said he was tough on Lance about cleaning his room. He said his parenting style was largely influenced by his military school background.

‘It was bend over and take your licks,’ he said of the punishments he doled out to Lance.

‘I was a taskmaster, but I didn’t put my arms around him enough and tell him I loved him,’ Terry said.

‘I was always there, always coaching him, always pushing him. But I didn’t show him the love that I should have.’

Armstrong confesses to ‘10,000 lies’ about steroid use in ESPN documentary – but allegedly went ‘toe to toe’ with the director, who refused to cede editorial control

Armstrong estimates he told ‘10,000 lies’ to shield his use of performance-enhancing drugs, as he explains in ‘LANCE’ – a film that appears to have displeased him.

‘Nobody dopes and is honest,’ he said in the upcoming film, according to USA Today.

While giving an admitted liar like Armstrong a platform may seem strange to some, director Marina Zenovich says she maintained control of the project, adding that the cancer survivor was actually displeased with the finished product when he first viewed it in December.

‘We went toe to toe on a couple of issues in the film, and I haven’t talked to him’ Zenovich told USA Today in a separate interview.

‘I don’t want to go into details, but I was very clear with him that I was going to make the film that needed to be made. And I did. I think he’s processing that.’ 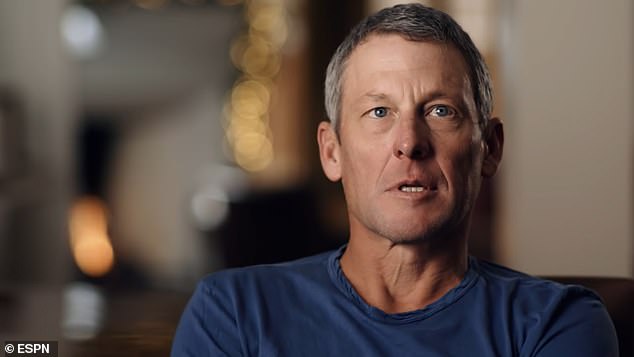 If fans were expecting Armstrong, 48, to be contrite while admitting to years of fraud, they may have been surprised by his vitriolic references to former teammates-turned legal nemeses.

Admitted steroids cheat Floyd Landis is apparently one of the Armstrong targets.

‘Could be worse,’ Armstrong said of his situation. ‘I could be Floyd Landis … waking up a piece of s*** every day.’

A former teammate of Armstrong’s, Landis finally admitted to PED use in 2010 while also implicating the seven-time Tour de France champion in the crime.

The two-part documentary is profane, and ESPN will release an edited version for family viewing.

The footage shows both sides of Armstrong: the heroic Texan who overcame cancer to win seven Tour de France titles between 1999 and 2005, and the disgraced cheater and bully who belligerently attacked his critics, who were ultimately proven right.

‘He’s utterly fascinating, and he’s likeable, and he’s light on his feet, and he’s funny,’ Zenovich told USA Today. ‘But he also did horrible things to people, so it’s kind of like you’re trying to understand someone. It’s like a perfect documentary subject. For me to be able to have the access to him to try to kind of uncover all of this was like a dream job.’ 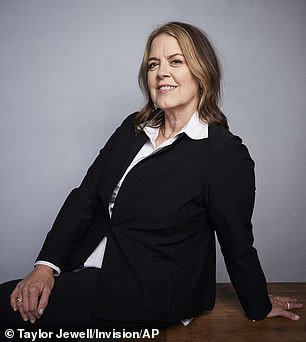 The film also tries to capture the complicated reaction to Armstrong’s cheating, which affected fans of his cycling and the beneficiaries of his cancer charity much differently.

‘Another thing that was surprising was to see how different people reacted to him in different ways,’ Zenovich said.

Even teammate Bobby Julich admits in the film that he struggles to define how he feels about Armstrong.

‘Thirty years of knowing a person, you either love him or hate him,’ Julich said. ‘I still haven’t decided where I stand after all that.’

If this feels like well-worn territory for Armstrong, that’s because he already gave a tell-all interview to Oprah Winfrey in 2013, confessing that it would not have been possible for him to win seven Tour de France titles without cheating. However, he denied accusations at the time that he pressured teammates into doping, bribed cycling officials, or took PEDs during his comeback in 2009 and 2010.

The preview makes it clear that Armstrong’s credibility remains in question after years of vehemently denying steroid use and berating reporters who questioned his integrity.

‘He’s very good at making sure he’s one step ahead of taking true responsibility for his actions,’ an unidentified voice can be heard saying during the trailer.

Armstrong was one of the most admired Americans amid his cycling dominance, and was the face of the Livestrong Foundation, the cancer charity that he helped to popularize by wearing a yellow band around his wrist. 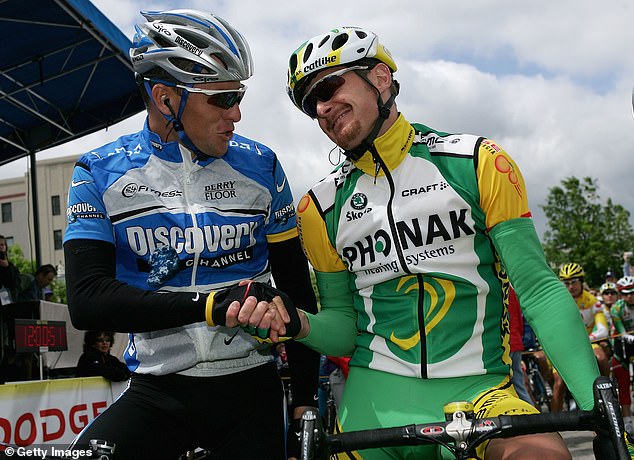 If fans are expecting Armstrong, 48, to be contrite while admitting to years of fraud, they may be surprised by his vitriolic references to former teammates-turned legal nemeses. Admitted steroids cheat Floyd Landis is apparently one of the Armstrong targets 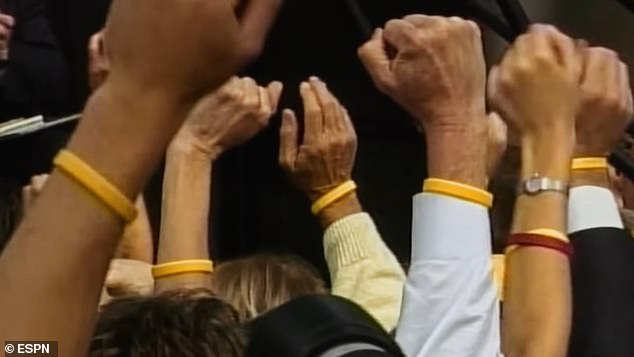 Livestrong’s trademark yellow wristbands were once worn by celebrities and politicians the world over. Donations and commercial ties to athletic apparel company Nike brought in tens of millions annually. But those days are gone. The wristbands are rarely seen anymore, and Nike ended its Livestrong clothing line years ago

‘I can never be honest about this because all of this goodness will come crashing down,’ Armstrong said in the preview as fans are shown wearing the yellow wrist band.

Although nearly every sport in North America has been sidelined by coronavirus, ESPN has generated interest with its 10-part docu-series on the 1997-1998 Chicago Bulls titled ‘The Last Dance.’

The first six episodes actually averaged 12.2 million viewers when DVR recordings are taken into account, according to ESPN.

ESPN has also announced an upcoming documentary about Tom Brady, which will be released in 2021. 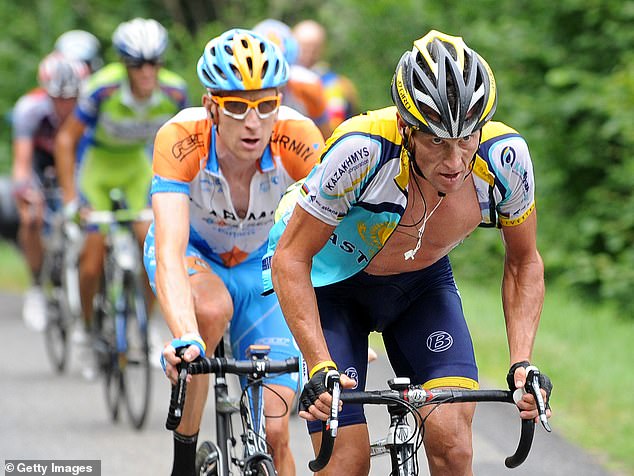 Armstrong was one of the most admired Americans amid his cycling dominance, and was the face of the Livestrong Foundation, the cancer charity that he helped to popularize by wearing a yellow band around his wrist