Pubs are to open with a hush rather than a bang with no raised voices, no loud music and a cap on numbers.

They are among a range of safeguards that also include a requirement that pubs, restaurants, cafes and even takeaways to collect the names and contact details of customers.

Pubs are concerned this will be difficult, costly and bureaucratic – and that the measures as a whole will deter customers.

Hotels also faced a complex set of requirements, including urging guests to wear face masks on communal corridors and shutting off the lifts.

Gyms could open next month as athletes condemn closures 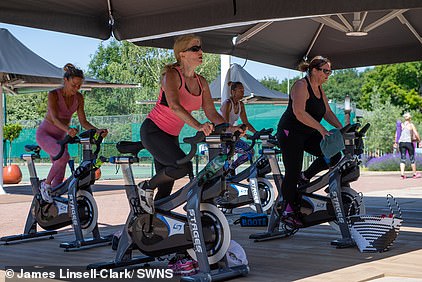 An outdoor spin class in Chigwell

Pools, gyms and leisure centres could reopen by the end of July, the Government said yesterday after leisure bosses accused them of ‘ignoring the health of the nation’.

Olympians condemned delays to the reopening of sporting and fitness centres.

In a letter to the Prime Minister she said that many in the industry had ‘lost faith’ in the Government’s strategy. Baroness Grey-Thompson, who chairs the leisure industry body ukactive, said: ‘To lose these facilities in the midst of the biggest health crisis could set back public health for a generation.’

She said safety plans submitted to the Government by the leisure industry on May 4 were all but ignored.

Leisure industry bosses yesterday challenged the Government to explain why pubs and restaurants have been deemed suitable for reopening but fitness centres have not.

Business Secretary Alok Sharma yesterday said leisure facilities could open ‘at some point later on in July’ if certain health tests are met, including the R rate staying below one.

Mark Sesnan, managing director of GLL, which operates 270 local authority leisure centres, said the decision ‘defied logic’ and the Government was ‘ignoring the health of the nation’.

The Information Commissioner has warned pubs and bars they must abide by data protection privacy rules around keeping details of customers secure.

This comes amid evidence from New Zealand of the misuse of this information. A woman using a Subway outlet who left her details on a contact form was subsequently pestered by a member of staff who tried to contact her via text, Facebook, Instagram and Messenger.

Bosses at UKHospitality and the British Beer & Pubs Association say the need to collect customer information is a major problem. In theory, staff will be required to demand contact details and keep them securely for 21 days. This is so they can be handed over to the NHS, track, trace and isolate regime.

However, the chief executive of UKHospitality, Kate Nicholls said: ‘This is going to be incredibly challenging.

‘With 11 days to go it is just not practical to develop a new system in one fell swoop.’

There will also be problems around restrictions on the number of people allowed in, enforcing social distancing, handling glasses, and running pubs with table service.

The rules for socialising include asking customers not to shout, which could spread infection, while any music, or football on TV, will be turned down.

The guidance states: ‘All venues should ensure that steps are taken to avoid people needing to unduly raise their voices.’

There will be no standing at the bar. There will also be controls on how many drinkers gather in a pub or beer garden.

The guidance adds: ‘Where necessary, inform customers that police and the local authorities have the powers to enforce requirements in relation to social distancing.’

Chief executive of the BBPA, Emma McClarkin said: ‘We do have significant concerns over the collection and storage of personal customer data.’

The Information Commissioner’s Office warned firms they must abide by data protection rules, ‘only collecting personal data that is necessary, making sure that it is not retained for longer than needed and keeping it secure.’

The Government advice asks hotels in England to urge guests to wear face masks on communal corridors. They should consider closing off the lifts, while room service orders should be left outside doors.

Families staying in hostels and B&Bs with shared bathrooms may also be told to book slots to use the shower, so they can be cleaned between use.

The guidance, provided by the Department for Business, Energy and Industrial Strategy, also says all visitors should be offered hand sanitiser on entry.

Hotel owners are urged to create a checklist of commonly-touched areas in bedrooms which staff must clean after each guest checks out. They are also encouraged to stagger check-in and check-out times.

As with pubs, no loud music should be played. Large groups, live performances and communal dancing are banned.

Fast-track law to let us dine in the streets

by Jason Groves, Political Editor for the Daily Mail

Laws to enable outdoor drinking, dining and shopping are to be fast-tracked through the Commons within a week.

Masks in shops rejected by PM

Ministers were advised that masks should be worn in shops to reduce the risk of coronavirus spreading – but it was not made mandatory by the Government.

The panel put in place to review the two-metre guidance said covering your face in ‘crowded indoor environments’ could help prevent transmission.

It said: ‘The following mitigations should be applied across all settings to reduce risk’, including ‘wearing face coverings when distances of two metres cannot be kept in indoor environments where possible.’ 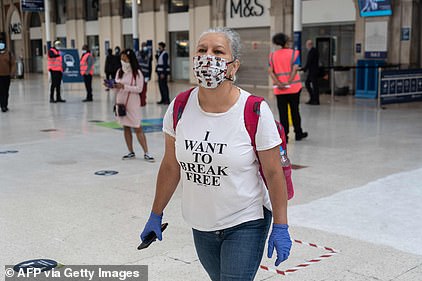 The panel singled out shops as somewhere where masks should be worn. But when he eased the lockdown earlier this week, Boris Johnson announced no plans to make it mandatory for people to wear masks in shops – just on public transport.

The review panel consisted of the chief medical officer, the chief scientific advisor and the Treasury’s chief economic advisor.

Last night Downing Street said they did advise people to wear masks in shops but it was not made mandatory because ‘you can leave a shop but you can’t get off a moving train’.

Ministers will today publish a Business and Planning Bill designed to help the hospitality and retail sectors trade outdoors this summer.

The legislation will make it easier for local authorities to turn streets over to businesses struggling to cope with social distancing indoors.

Boris Johnson has asked ministers to fast-track the legislation so that it is in place by July 4, when the hospitality sector largely reopens. Controversial plans to reform Sunday trading laws have been dropped from the Bill to ensure it passes through Parliament quickly.

A government source said: ‘People talk about the cafe culture on the Continent and we want to recreate something like that here this summer – you could call it al fresco Britain. It obviously depends on everyone adopting a can-do attitude to try and save the summer, but we are going to play our part by cutting red tape and getting out of the way of business.

‘You could see closed-off streets laid out with tables and chairs for dining. We are removing the need for planning permission for outdoor markets, so you could see small shops and boutiques which are struggling with social distancing setting up market stalls.’

The move is designed to counter criticism that guidance for indoor hospitality and retail is too onerous and off-putting to customers.

Former Tory leader Sir Iain Duncan Smith yesterday said ‘red tape and caveats’ in hundreds of pages of guidance published for businesses would make it impossible for many firms to operate profitably.

But ministers hope the new outdoor freedoms could help keep many firms afloat this summer.

The focus of the legislation, which will allow outdoor trading without the need for planning permission, is on creating a much more permissive business environment outdoors, where scientists believe the virus spreads much less easily.

Temporary changes to licensing laws will allow many more licensed premises, such as pubs and restaurants, to sell alcohol for consumption off the premises. Pubs and restaurants will also be able to convert outside space such as car parks and terraces into seated areas.

Downing Street yesterday confirmed that hospitality businesses have been exempted from laws that ban gatherings of more than 30 people. No 10 said police would focus on breaking up ‘large, unruly’ gatherings, such as parties in parks and illegal raves. 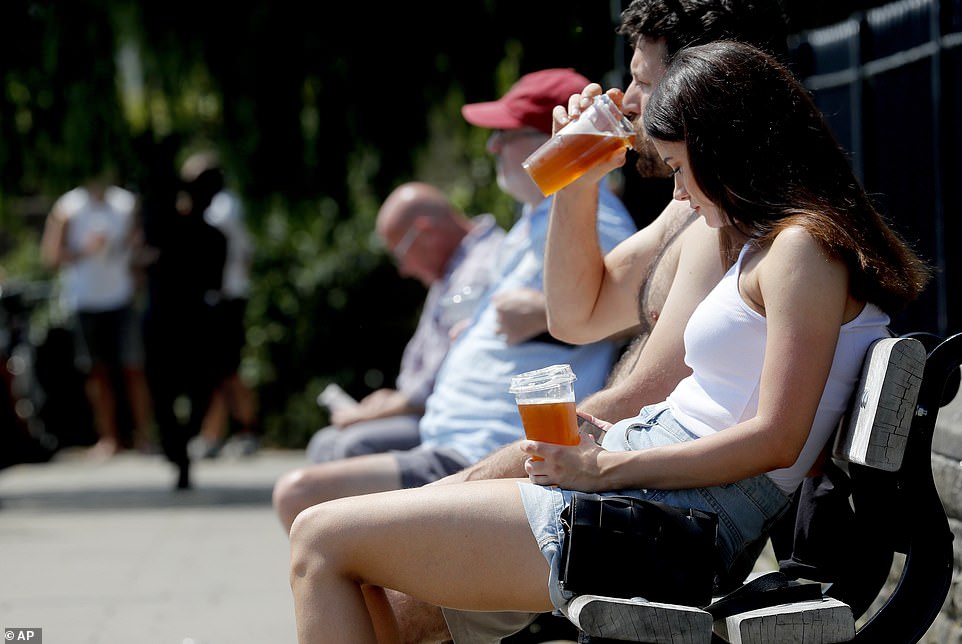 Temporary changes to licensing laws will allow many more licensed premises, such as pubs and restaurants, to sell alcohol for consumption off the premises. Pictured, people sit outside a pub that sells takeaway drinks in London

Police ‘can still enter bars to break up rowdy gatherings’

by Daniel Martin Policy Editor for the Daily Mail

Police will retain the power to enter pubs to break up ‘large and irresponsible’ gatherings even after lockdown measures are eased, Downing Street has said.

The Prime Minister’s official spokesman said that, while many of the rules and regulations of the past few months will become merely guidance, some powers will remain.

Pubs and restaurants have been exempted from laws that ban gatherings of more than 30, but the spokesman added: ‘What the police will be able to do is break up large and irresponsible gatherings of over 30 people.

‘If you have a very big gathering taking place in a park or the sort of raves we have seen taking place in parts of the country in recent weeks, police would have the power to break those up.’ 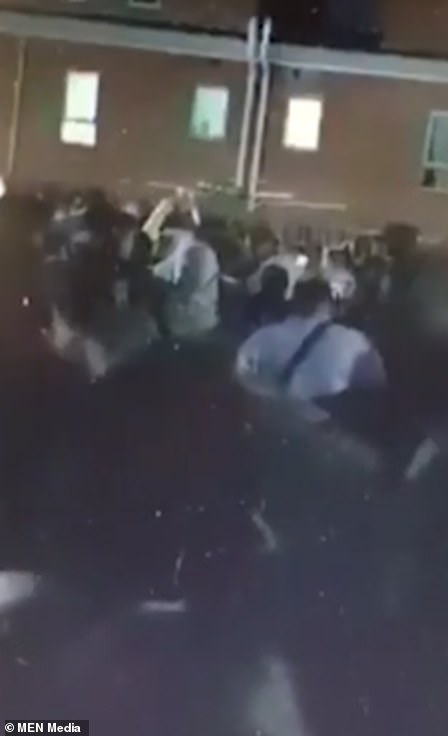 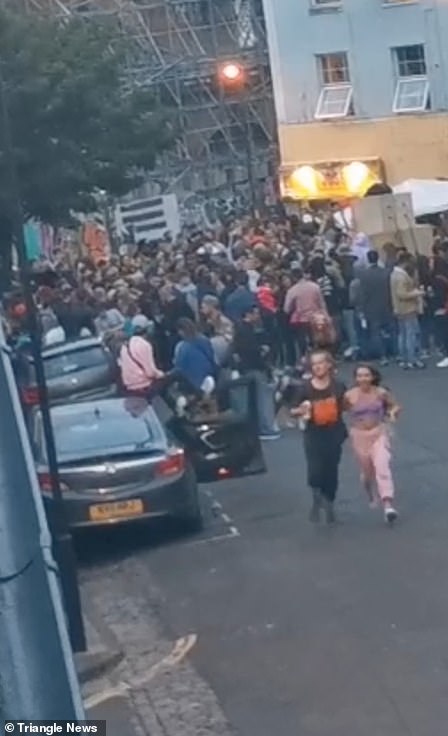 The Prime Minister’s official spokesman said that, while many of the rules and regulations of the past few months will become merely guidance, some powers will remain. Illegal raves will be broken up by officers. Pictured, an illegal street party in Manchester (left) and Bristol (right)

The warning came amid fears that the easing of lockdown on July 4 – a day some are referring to as ‘Super Saturday’ – could cause massive problems for the police.

The plan has been criticised by some, with Andy Burnham, the mayor of Manchester, telling Sky News: ‘The plan to open everything on a Saturday, I think is a mistake. Police forces and councils across the country will think, well why is all of that happening on a Saturday?

‘The guidance around the two-metre rule doesn’t seem to me to be as clear as it should be. It’s too nuanced and we need simple messages for the public.’

Official guidance for pubs published yesterday advised landlords they should inform customers who refuse to follow social distancing rules that the police could be called.

Boris Johnson’s spokesman said police would also retain the power to enforce the wearing of face coverings on public transport, and that local authorities will have the power to close or fine businesses not following regulations.

He added: ‘Other regulations that remain are to help enforce that people arriving in the UK quarantine for 14 days and also the powers the authorities have to detain someone considered a public health risk.’