Frustration among the home fans was evident during a turgid first half notable only for Jonas Lossl’s save from Mohamed Salah’s penalty.

But Daniel Sturridge made the breakthrough in the 50th minute – his 100th goal in club competition – and further goals from Roberto Firmino and Georginio Wijnaldum ensured Jurgen Klopp had the last laugh over best friend David Wagner.

Liverpool manager Jurgen Klopp: “Of course we had not the best week. We take the situation really seriously. It is really important. Tottenham was the worst game we played in the season and you can’t ignore it. It can happen. But three goals, three points, clean sheet.” Huddersfield manager David Wagner: “I would say at the end it was a fair result. Until the first goal we played defensively very well, we neutralised them. I haven’t seen Anfield so quiet until the first goal. After we conceded the first goal we conceded the second from a set-play and Liverpool showed their offensive power.”

Cool as you like that finish from @DanielSturridge. Most people would blast it. Great to watch a proper finisher.

On an afternoon where no one really stood out, the most important moment of the match was undoubtedly Sturridge’s breakthrough goal. Although he was in a lot of space, the ball fell for him at an awkward height and the striker showed real coolness of thought to dink it over Lossl.

Stat of the match

34 – Liverpool have now missed 34 @premierleague penalties – no side has missed more in the competition (Arsenal also 34). Waste.

Salah’s penalty miss was the 34th time in Premier League history that Liverpool have failed to convert a spot-kick, drawing them level with Arsenal as the most profligate team.

In with the crowd

It has been a tough run for Liverpool in the league and that was apparent during a turgid first half. Huddersfield fans sang “where’s your famous atmosphere” and the only real noise from the Liverpool fans showed their frustration. A penalty offered a golden chance but there were more grumblings when Salah stepped up rather than James Milner or Firmino and hit it straight at Lossl. A few boos could be heard at half-time but the second half proved to be a much more enjoyable experience for the home faithful. 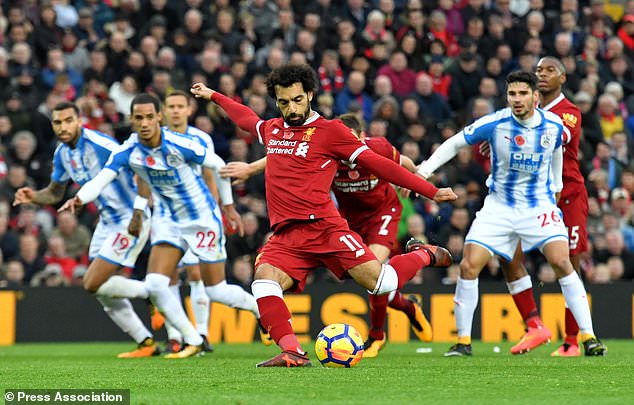