‘Young people should NOT drink’: Landmark study warns under 40s should avoid ALL alcohol for the sake of their health – but a small glass of red can cut risk of heart disease, stroke and diabetes in older adults

Put the keg away. People under 40 years old should never consume alcohol as it provides them no health benefits while increasing their risk of injury and death, a new study finds.

Researchers at the University of Washington, in Seattle, found that people under 40 who drink are more likely to be injured in a car accident, suicide or murder than their peers that avoid alcohol.

There could be some benefit to drinking for people over 40, though, as a glass of red wine each day could help reduce the risk of developing heart disease, stroke or diabetes.

According to most recent data from the Centers for Disease Control and Prevention (CDC) 66 percent of adults in the U.S. consume alcohol every year, and five percent are heavy drinkers.

Researchers found that people under the age 40 do not have anything to benefit from drinking, and should avoid it entirely if possible (file photo)

‘Our message is simple: young people should not drink, but older people may benefit from drinking small amounts,’ Dr Emmanuela Gakidou said in a statement.

Researchers, who published their findings Thursday in the Lancet, gathered data from over 200 countries for their Global Burden of Diseases study.

They compared alcohol use to 22 health conditions or outcomes, like injury, heart disease, cancer and more.

While the general public is likely aware of some dangers of alcohol – and particularly the damage it can cause to a person’s liver – researchers set out to determine who suffered what level of risk and for what conditions.

They found that around 1.3 billion people consumed a harmful amount of alcohol in 2020, or around 15 percent of the global population.

Nearly three-in-five people who engaged in risky drinking were between the ages of 15 and 39 – age groups that are not recommended to consume any alcohol.

Around 75 percent of that group were males.

People in that age group have nothing to benefit from drinking, the researchers find, and are most likely to end up hurting themselves as a result of alcohol consumption.

There is some leeway a person has with drinking before it can cause them long-term damage to their health, though.

Researchers found that a man aged 15 to 39 years old could drink an average of 0.136 drinks per day – or just under one drink a week – and have nothing to worry about.

For women under 40, the tolerance is increased to 0.273 per day, or just under two drinks per week. 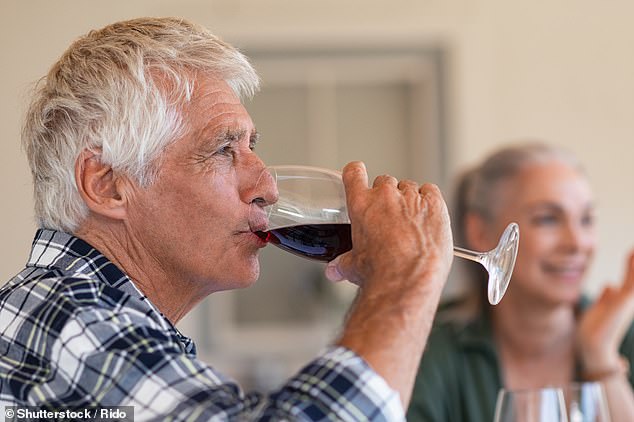 Elderly people who drink red wine every now-and-then can reduce their risk of developing heart disease, diabetes, stroke and other conditions (file photo)

Convincing younger people not to drink is a tough task, though, especially in the U.S. and across Europe where alcohol has become engrained in younger cultures.

‘While it may not be realistic to think young adults will abstain from drinking, we do think it’s important to communicate the latest evidence so that everyone can make informed decisions about their health,’ Gakidou said.

Elderly people have more of a cushion with drinking and their health, and can even benefit from a drink every now-and-then.

Researchers found that people aged 40 to 64 years old could drink up to two daily and maintain their health.

The elderly, people 65 and older, can stretch that all the way to three drinks per day.

This difference comes from the potential health benefits from drinking experienced by older people.

While youngsters have little to gain, older people who drink red wine generally have better heart health and brain health than their peers.