The Los Angeles Police Department said they are gathering evidence and video footage for an investigation into an off-duty officer who shot and killed a ‘mentally disabled’ man authorities say attacked him inside a Costco in Southern California.

Kenneth French, 32, was killed and his parents were critically injured when the off-duty LAPD officer shot them on Friday night inside the Costco Wholesale warehouse store in Corona.

Police said the officer, who hasn’t been named, fired his gun at French following an altercation that witnesses say took place near the freezer section. The shooting also injured French’s parents who remain hospitalized in critical condition.

Authorities say the officer was carrying his child and that he retaliated after French attacked him.

The Los Angeles Police Department announced Sunday evening that they are investigating an off-duty officer’s actions after he shot dead Kenneth French (right, with his parents), 32, inside a Costco store in Corona

Authorities remained tight-lipped Sunday, not responding to requests for comment about what provoked the Friday night confrontation and whether anyone but the officer was armed.

Police said on Saturday that the officer opened fire after French, of Riverside, ‘assaulted’ him ‘without provocation’ as the officer held his young child.

Bullets struck French and two of his family members, according to police. The officer was the only person who fired shots in the store, police said.

Rick Shureih, French’s cousin, told The Press-Enterprise that he was a ‘gentle giant’ who was mentally disabled.

French was ‘non-violent, non-aggressive, non-verbal,’ his cousin said, and ‘he has to be pretty much monitored’. 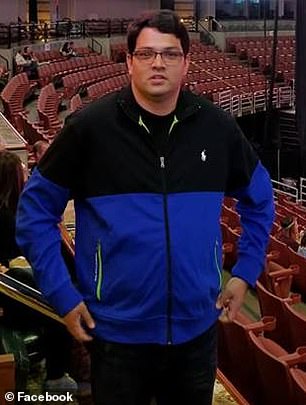 Police said the officer, who hasn’t been named, fired his gun at French (above) following an altercation that witnesses say took place near the freezer section

‘He’s not the kind to trade words, so I don’t believe that a verbal confrontation happened,’ Shureih said.

Shureih also identified the other two victims as French’s parents, Russell and Paola French, and said they remained in an intensive care unit Sunday. Authorities have not released their names.

The officer was treated and released at a nearby hospital and the officer’s child was not injured.

Police said the off-duty officer was the only one who fired shots in the store.

French’s family is seeking an attorney, Shureih said, and declined to give specifics about his mental condition.

The LAPD will continue its internal probe as Corona police and the Riverside County district attorney’s office conduct a separate investigation into the shooting. The LAPD said Sunday it had no further information.

Corona police and the district attorney’s office did not respond to requests for comment Sunday.

Los Angeles Police Commission President Steve Soboroff said Sunday it is Chief Michel Moore’s decision whether to put the officer on leave, but it remained unclear if that happened.

The department’s policies allow off-duty officers to carry concealed weapons as long as they are authorized for on-duty use, according to the LAPD manual.

Joseph Giacalone, a professor at the John Jay College of Criminal Justice and a retired New York City Police Department sergeant, said it’s justifiable to use deadly force even in a crowded store if the attacker has a weapon. 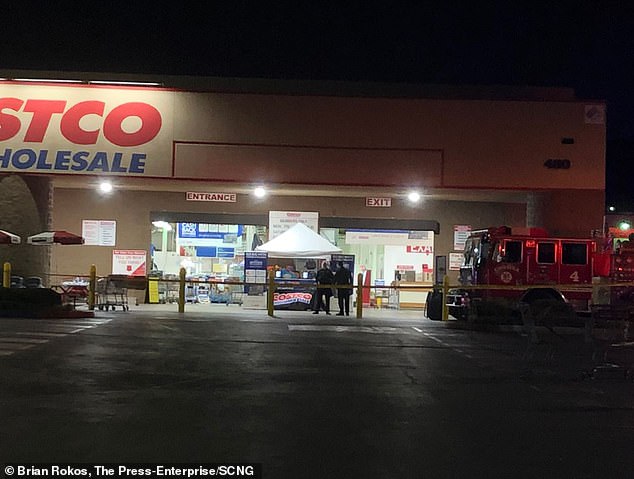 Police said on Saturday that the officer opened fire after French, of Riverside, ‘assaulted’ him ‘without provocation’ as the officer held his young child in Costco (pictured) 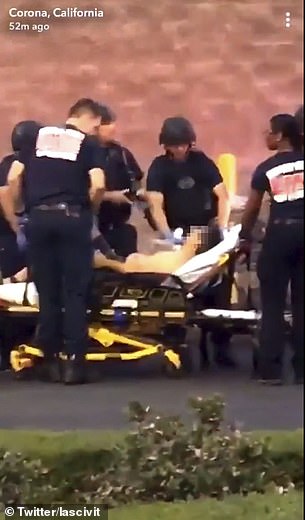 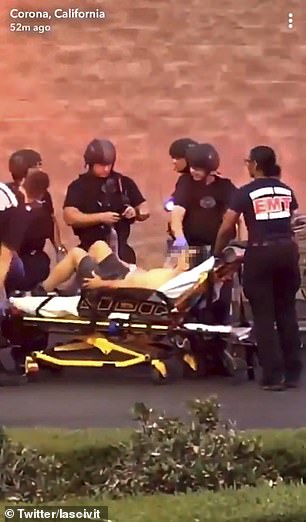 French was killed and his parents were injured. His parents remain in critical condition after being struck by gunfire 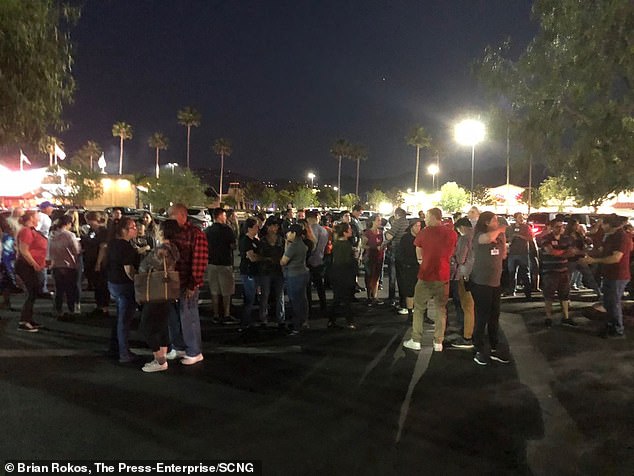 ‘If the guy pulled out a pocketknife and approaches him, game over,’ Giacalone said Sunday.

Police have not said if French had any weapons or if the officer identified himself as police before firing.

French’s cousin penned a Facebook post on Sunday saying the family were unfairly being painted as suspects.

‘My cousin Kenneth was killed and his parents, my aunt and uncle were also both shot and are in ICU. Do they look intimidating to you? Did he really have to shoot them all?’ Rick Shureih wrote.

‘I’m posting this picture because the stories on social media have made them out to be the suspects, and the off duty cop the victim.

‘This is a family that was unarmed and was just grocery shopping. Truth will come out! I’m sure this was a misunderstanding that got escalated for no reason!’

The shooting prompted a stampede of frightened shoppers to flee the store east of Los Angeles and seek cover inside.

Witnesses said they saw a man with a Mohawk haircut arguing with someone in the freezer section when shots rang out at least six times.

Corona police Lt Jeff Edwards said the man involved in the argument was the one who was killed.

Shoppers and employees have since described terror and chaos when the shots rang out. 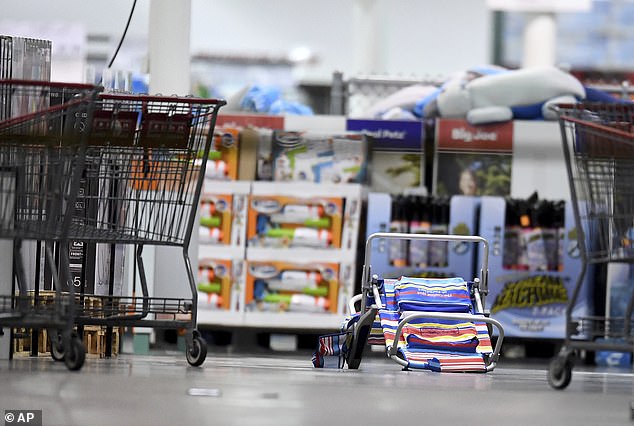 Police said purses, cellphones and backpacks were left inside the store as panicked shoppers fled 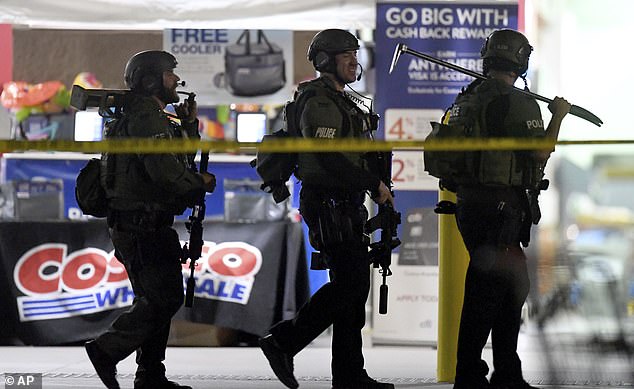 Shrieks from inside the store were heard on video recorded by shopper Nikki Tate, who had stopped by with her daughter to pick up steaks and lobsters for Father’s Day.

Tate said Saturday she was by the meat section when she heard ‘about six or seven shots’.

She dropped to the ground and crawled toward her daughter who was at the other end. They huddled until they were able to escape through a side door.

‘I saw people and heard shots and my first thought was ‘Jesus, is this another mass shooting?” she said.

‘I didn’t know if this was a random thing or a domestic thing or if this was a mass shooting. Everything was happening so fast, I just wanted to get me and my kid to safety.’

In the video, her daughter says: ‘Mommy, we need to go.’

Meanwhile, Christina Colis told the Riverside Press-Enterprise that she was in the produce area when she heard six to seven shots and hid with other shoppers in a refrigerated produce room.

She said her mother saw people injured on the floor.

‘I thought maybe someone dropped a bottle of wine, but then I kept hearing shots,’ shopper Will Lungo told the Press-Enterprise newspaper.

‘An employee came in and helped us out through the emergency exit.’

Witnesses told KCAL-TV that shoppers and employees rushed to the exits.

The station reported that more than 100 people were outside the store at one point.

Police said purses, cellphones and backpacks were left inside the store as panicked shoppers fled.