LAPD cop ‘finds a tampon in his Starbucks Frappuccino’

An LAPD cop has claimed to find a tampon in his Starbucks Frappuccino after drinking half of it in what police unions are calling a ‘disgusting’ assault on an officer.

The cop was off-duty but used his police credit union debit card to pay for the drink, according to Fox. It is unclear if he was in uniform.

He had bought it in a Starbucks inside a Target in Los Angeles. Halfway through drinking it, the officer found the tampon.

He went back into the store to complain and now the Los Angeles Sheriff’s Department is investigating.

The cop was off-duty and not in uniform but used his police credit union debit card to pay for the drink. He drank half of it then found this

The sheriff’s department said it was pulling surveillance footage from the store.

‘Walnut Station Detectives are investigating an incident of alleged poisoning of food or drink at a local business. The incident was reported to have occurred Friday, June 19, 2020 at approximately ‪2:30 p.m.‬, on the 700 block of Grand Avenue in the city of Diamond Bar.

‘The victim was a male White 36 years-old. This is an ongoing investigation.

‘No further information is available at this time,’ the department said.

Last week, there was uproar over police officers who were believed to have become ill after drinking Shake Shack milkshakes.

The NYPD tweeted that they’d been targeted but it turned out the officers never actually suffered any symptoms and the tweet was an ‘overreaction’.

The incidents come amid a backdrop of outcry over America’s policing and widespread calls to overhaul it.

The LA Police Protective League said the Starbucks incident was ‘[a] disgusting assault on a police officer carried out by someone with hatred in their heart’.

‘We hope they are publicly exposed, fired, arrested, and prosecuted for their cowardly and repugnant actions,’ the League said.

Neither the cop nor the employee allegedly involved has been identified. 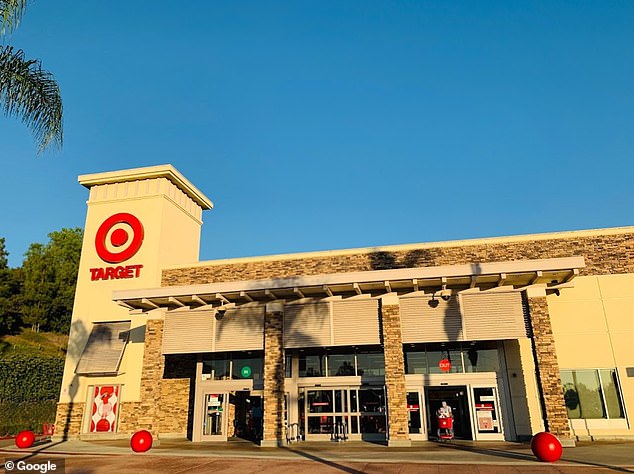 The Starbucks was inside this Target store in Los Angeles

On June 15 three officers, who were based in the Bronx but on protest duty in Lower Manhattan, ordered milkshakes from Shake Shack but found they smelled and tasted odd and they suspected they had bleach in them.

However, those officers never felt sick and threw the drinks away.

Yet the mishap escalated into a crime scene investigation where caution tape was put up, evidence was collected, and the Detective’s Endowment Association claimed the cops were ‘intentionally poisoned’.

The NYC Patrolmen’s Benevolent Association tweeted that ‘NYC police officers cannot even take a meal without coming under attack’.

In Georgia, a female police officer was dubbed ‘Officer Karen’ for tearfully claiming that she thought her McMuffin from McDonald’s had been tampered with.