Lara Trump walks through Central Park with her son Luke, their three dogs, a nanny, and a friend

Lara Trump has revealed that she is fostering a new pup, and she celebrated the newest addition to her family by taking her dogs and her 11-month-old son, Luke, for a stroll through Central Park this week.

The 35-year-old wife of Eric Trump dressed casually in a black T-shirt, camouflage leggings, and flip flops while holding two of her three dogs’ leashes for the scenic walk in New York on Thursday.

Little Luke, who was pushed in his stroller by his nanny, was barefoot and matched his mom with his camouflage leggings.

Helping hand: Lara Trump was joined by her nanny as she took her 11-month-old son for a walk through Central Park in New York City on Thursday 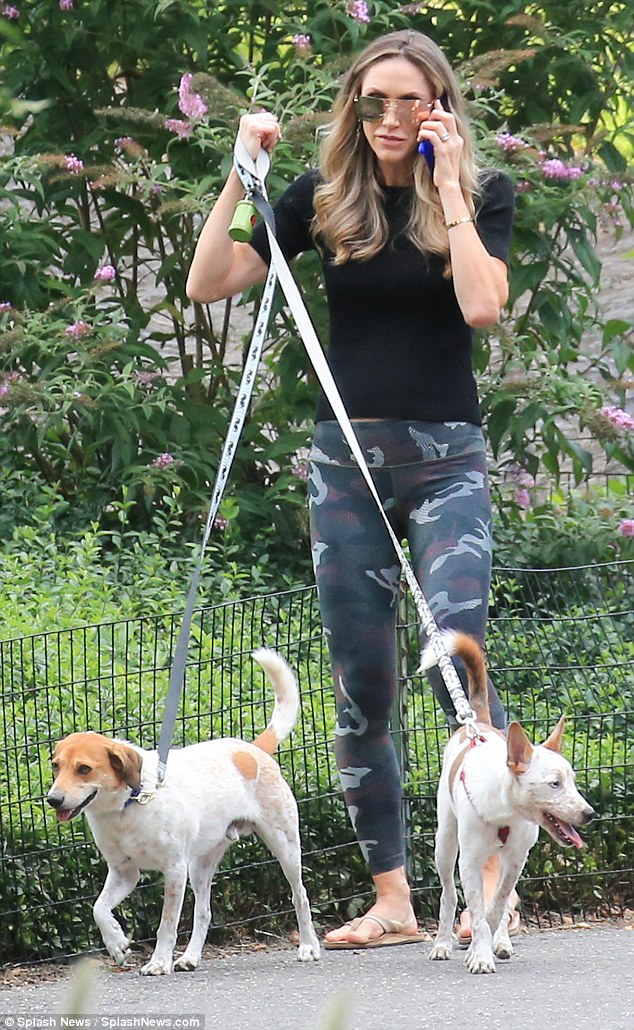 Hand full: While the nanny pushed Luke’s stroller, Lara walked her rescue Ben (left) and Caesar (right) the new dog she is fostering 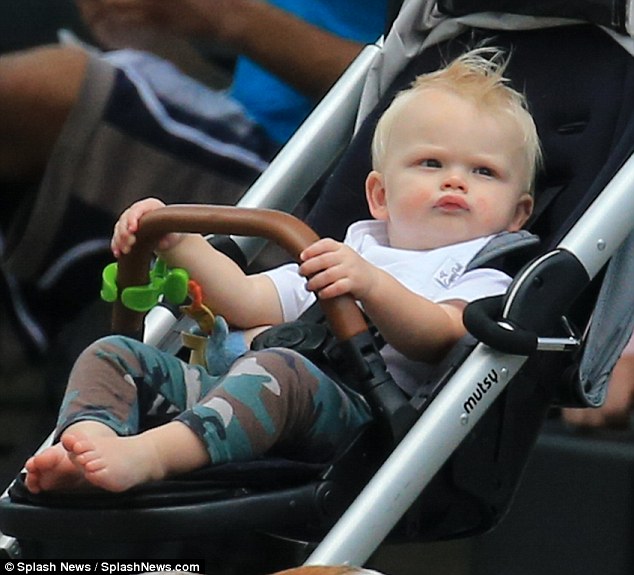 Too cute: Little Luke was barefoot while sitting in his stroller during the outing

Lara’s friend walked her beagle Charlie, while she took care of her rescues Ben and Caesar, the dog they are fostering.

The mother-of-one shielded her eyes from the sun with a pair of mirrored aviators, which she occasionally wore resting on the top of her head.

She wore minimal jewelry aside from her engagement ring and a gold bangle that she had on her left wrist.

Despite her casual look for her trip to the park, her long blonde hair looked like it had been freshly blown out. 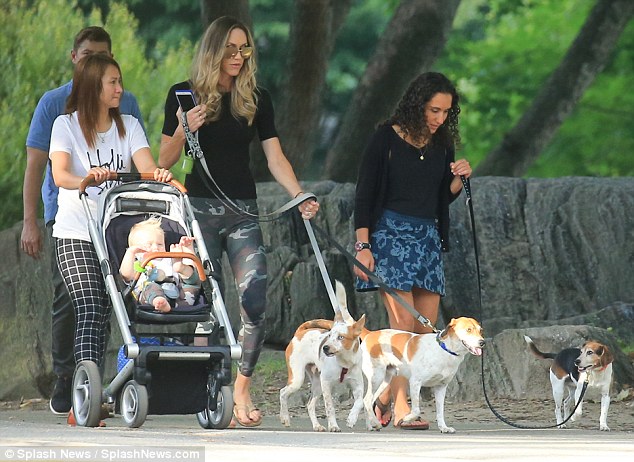 Group outing: Lara was also joined by a friend, who was seen holding her dog Charlie’s leash 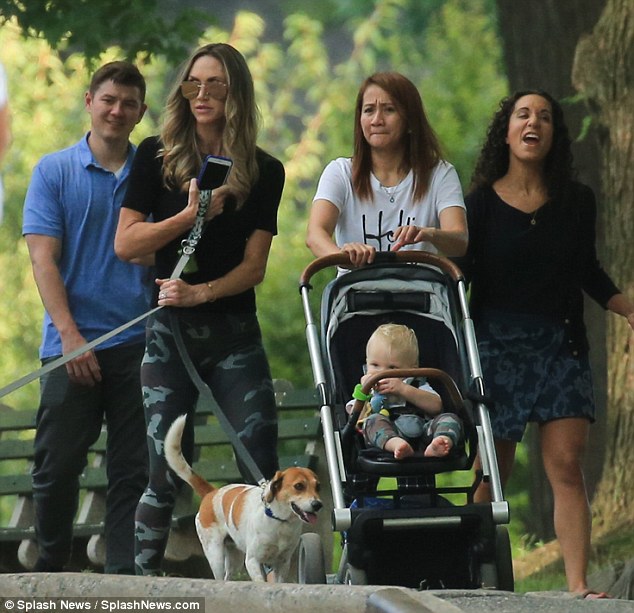 On the go: Lara carried her cellphone in her hand as she wrangled the two dogs she was walking 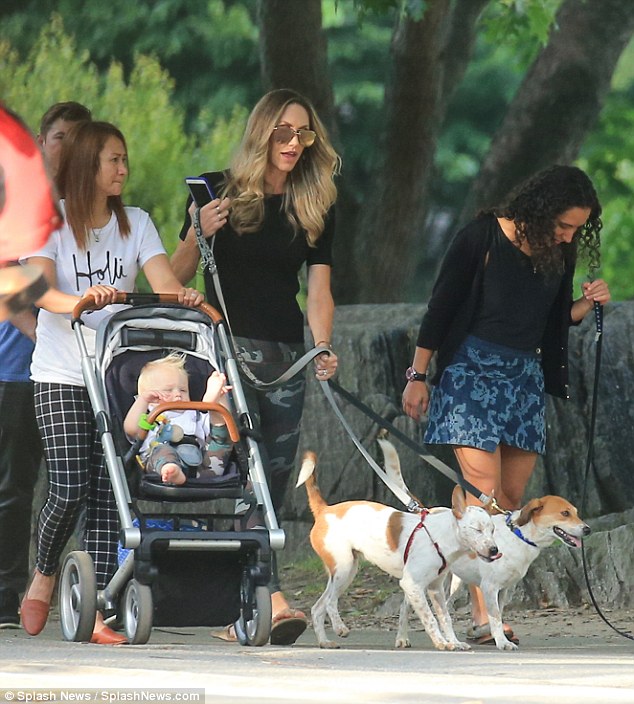 Covered: The mother-of-one shielded her eyes from the sun with a pair of mirrored aviators 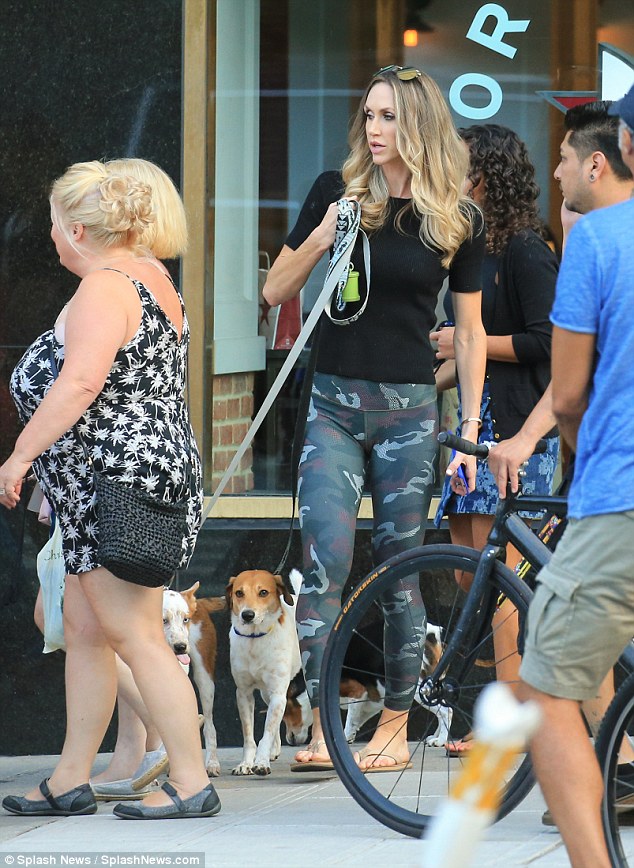 Outfit of the day: Lara donned camouflage leggings, a black T-shirt, and flip flops for the casual outing

Lara spent most of the outing talking on her cellphone, and she appeared to be having quite the conversation.

She and her dogs walked ahead of Luke while she was on the phone, and at one point, her jaw dropped over something that was said on the other line.

When she wasn’t on her cellphone, she held it in her hand while walking between her nanny and her son and her friend.

Her baby boy, who will be celebrating his first birthday next month, looked perfectly content in his stroller while he was pushed by his nanny.

The group was closely followed by two Secret Service agents as they made their way to Central Park’s vintage carousel, but it was already closed when they arrived. 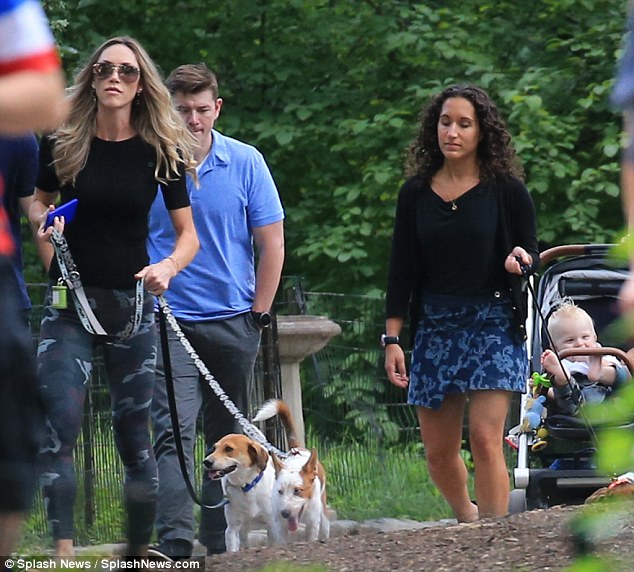 In a hurry? The mom walked slightly ahead of the group during the walk

Multitasking mom: Lara spent most of the walk chatting on her cellphone Say what? At one point, her jaw dropped over something that was said on the other line 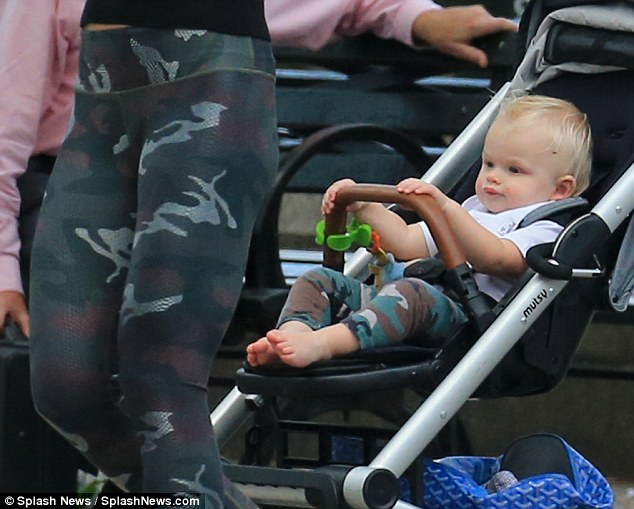 Mommy and me: Little Luke matched his mother in camouflage pants 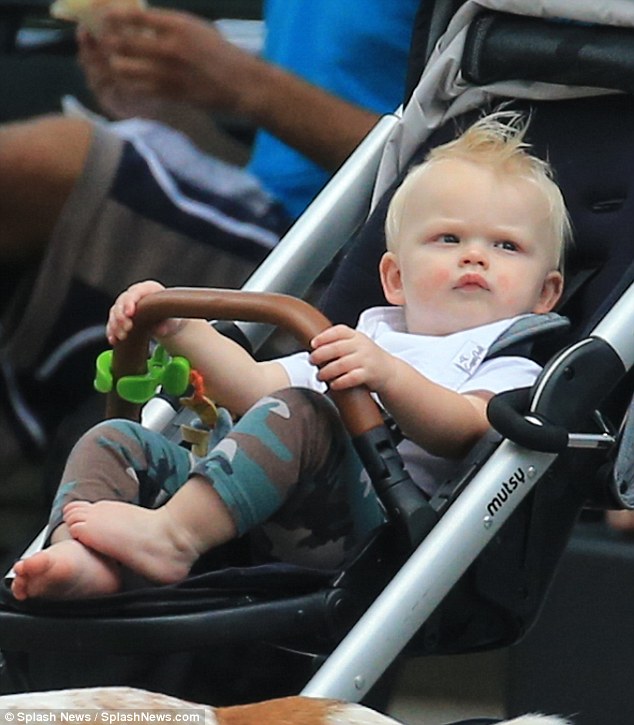 Milestone: Luke will be celebrating his first birthday on September 12 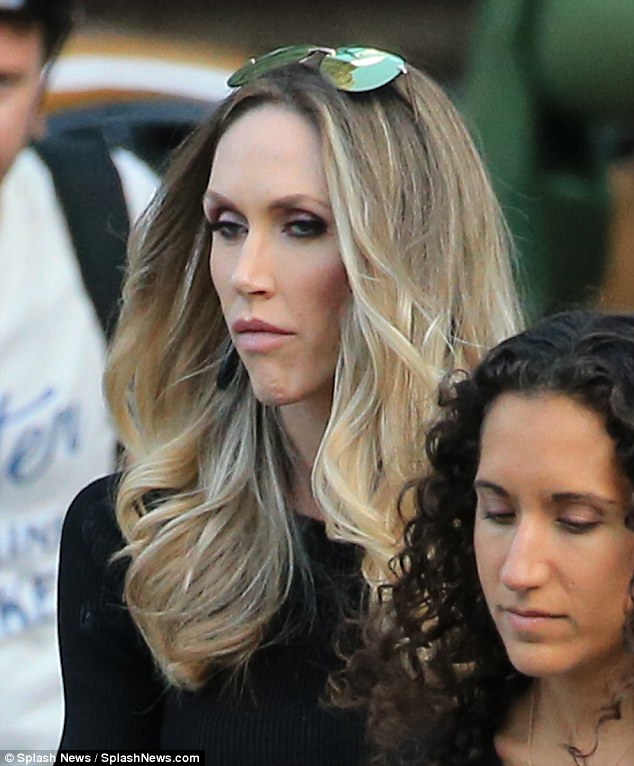 Added touch: Despite her casual look for her trip to the park, her long blonde hair looked like it had been freshly blown out 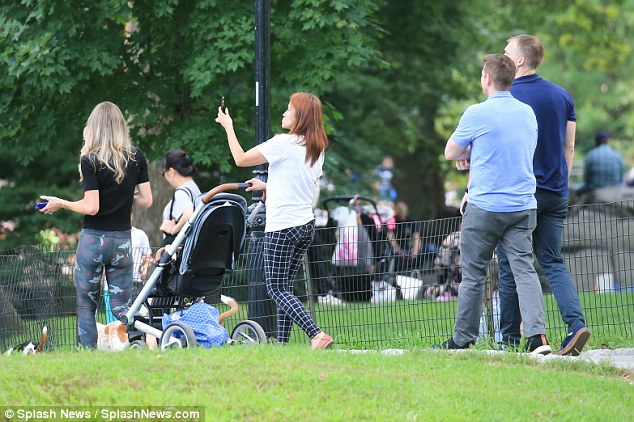 Lara and her friend were seen speaking with someone inside the pavilion that houses the carousel, but little Luke never ended up getting a chance to ride it.

Earlier in the day, the proud mom took to Instagram to share a heartwarming video of her three dogs swarming around Luke while he is eating his breakfast in his high chair.

It looks like Caesar is already feeling comfortable with Luke, and the video shows him jumping up and putting his front legs on the tray of the little boy’s high chair while looking for food.

‘Excuse me Caesar, excuse me,’ she says. When the foster dog finally gets down, she thanks him.

‘Just 4 dogs having breakfast #DogCentral,’ she captioned the cute clip. 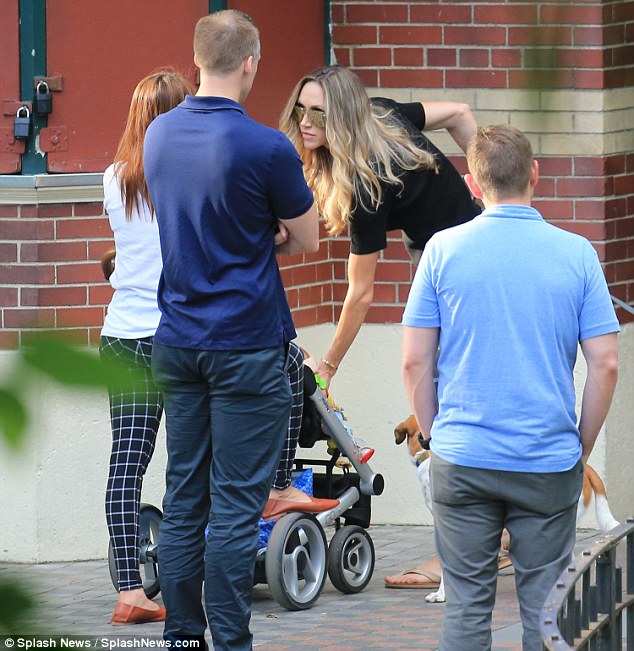 End game: Lara and her team were headed to Central Park’s vintage carousel 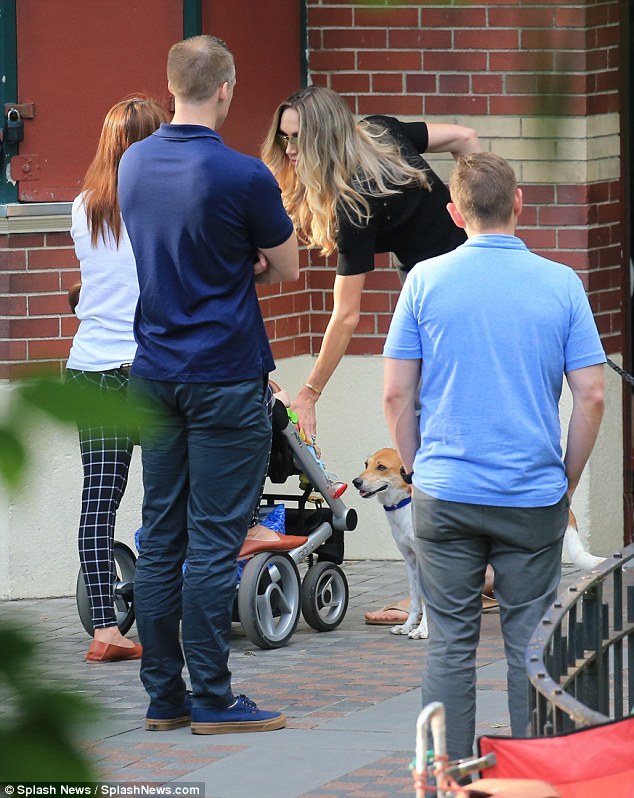 Doting mom: Lara stopped to check on Luke when the arrived at the pavilion that houses the carousel Too late: The carousal was already closed by the time they got there 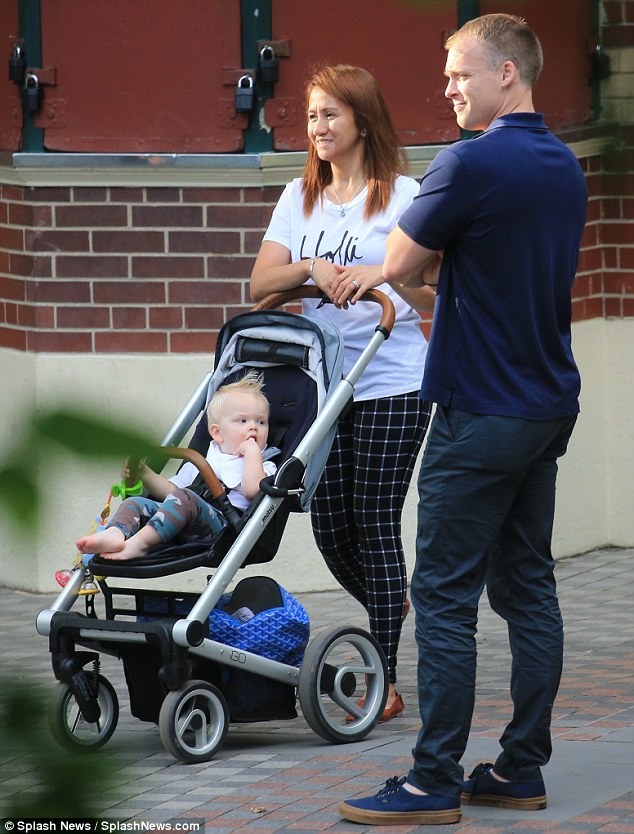 Waiting game: Lara’s nanny and a Secret Service agent watched over Luke while she talked to someone working the carousal Casual Friday: The next day, Lara’s husband, Eric Trump, 34, was seen grabbing an iced coffee as he made his way to work at Trump Tower

On Wednesday, Lara posted a snapshot of herself cuddling Caesar as well as a picture of him posed with her dogs Charlie and Ben while revealing that she is currently fostering him.

‘Welcome to our (foster) family, Caesar! We may only have you for a few days, but we will love you forever! #FosterSavesLives #UnderBite #rescuedogsrocknyc,’ she captioned the image.

Although she made it clear that she was only fostering Caesar, it’s possible that she may change her mind about keeping him.

Two years ago, Ben was brought to her home as a foster, but she and Eric, 34, and up making him a permanent member of their family.

Lara was spotted out with Caesar on Friday morning as well, while her husband was seen getting an iced coffee from Starbucks as he made his way to work at his Trump Tower office. 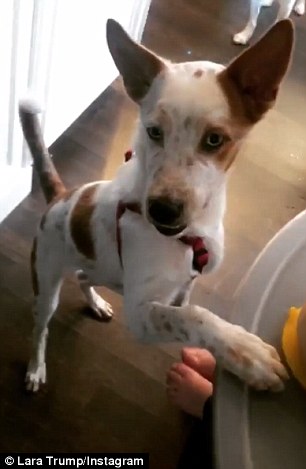 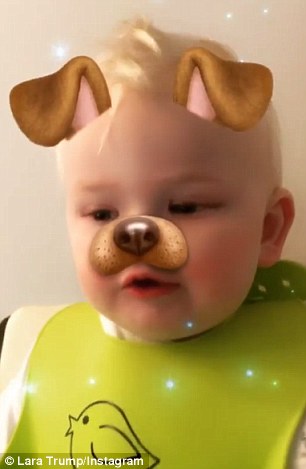 Right at home: Before their walk on Thursday, Lara posted a cute video of Caesar having breakfast with baby Luke 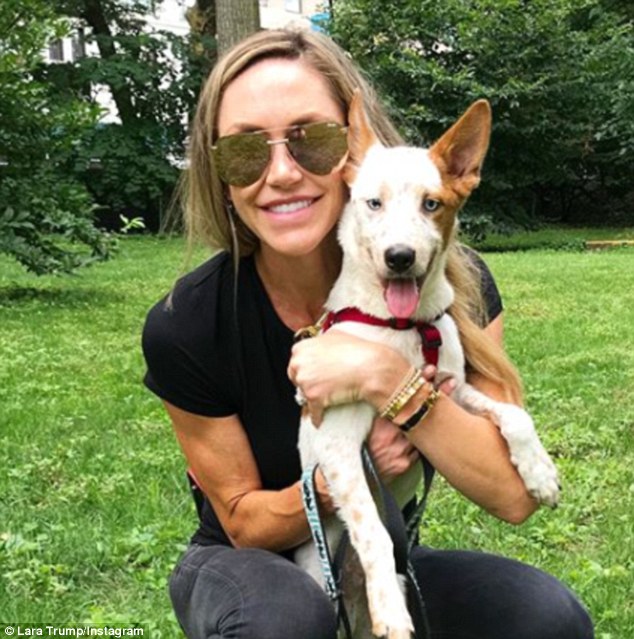 Animal advocate: Lara shared a photo of herself cuddling Caesar on Wednesday to announce that she was fostering him 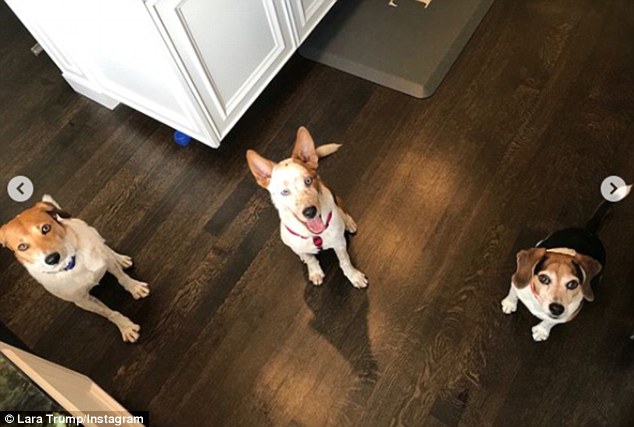 One of the gang: The dog lover couldn’t resist sharing a snapshot of Caesar with Charlie and Ben

Eric looked like he was feeling casual Friday in his light blue Trump International Dubai polo shirt and khaki pants.

Lara is an advocate for animals, and earlier this month, she joined an animal rights crusade to end greyhound racing in Florida alongside the state’s Attorney General Pam Bondi.

President Trump’s daughter-in-law made a special guest appearance at the fundraiser ‘Protect Dogs – Yes on 13,’ which took place in Greenwich, Connecticut.

The fundraiser was sponsored by the Humane Society of the United States and GREY2K USA, a non-profit organization that promotes the protection of greyhound laws.

Lara has played a role in several other animal rights campaigns — most notably Pets for Vets, which couples mentally and physically ill veterans and homeless pets.