Larry Nassar found himself in a very familiar situation on Wednesday, with the cuffed and chained pedophile doctor awaiting to hear a victim impact statement in a Michigan courtroom.

Sixty-five women are scheduled to speak over the course of three days in Eaton County Court, where Nassar is being sentenced after entering a guilty plea on three charges of criminal sex abuse, with each carrying a minimum sentence of 25 years in prison.

The first person to speak on Wednesday was charging victim Jessica Thomashow, whose impact statement was interrupted early on when she stated that one of the worst moments in her life was when Nassar and his legal team laughed at her in court while she testified about her assault.

That remark caused defense attorney Matt Newburg to jump out of his seat and object for the record, at which point Judge Janice Cunningham asked Thomashow and the other young women who would be testifying after her to limit comments to their assaults and its repercussions.

Assistant Attorney General Angela Povilaitis said later in the day that her office had received 256 reports of abuse in this case – so far.

The proceedings also drew out one very notable name, with Republican nominee for governor and current attorney general Bill Schuette seen in the gallery on Wednesday.

Speaking out: The sentencing trial for Larry Nassar kicked off in Eaton County Court on Wednesday with testimony from Jessica Thomashow (above on Wednesday) 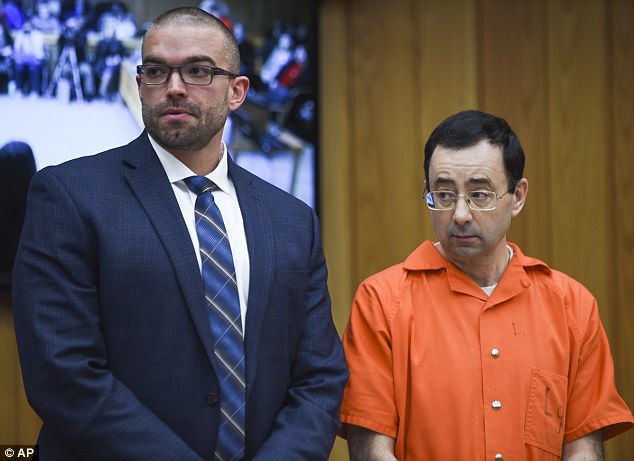 ‘No teenager should ever have to see the inside of a courtroom as many times as I have,’ said Thomashow, revealing this was her eighth time giving testimony.

She was in court just last week for Nassar’;s sentencing in Ingham County and the week before that when she delivered her impact statement in that case.

Her sister Amanda also spoke, as the two are one of four sets of sisters who have come forward to reveal they were both abused by the doctor.

“He first molested me when I was 9. When I was in fifth grade, before I had braces, and when I still played with my American Girl dolls.’

She added: ‘Larry Nassar preyed on us for his own pleasure, leaving in his wake traumatized and broken girls.’

Thomashow revealed that her abuse happened while she was training at Twistars, the gym owned by Nassar’s friend John Geddart.

She also revealed that all the girls who worked out at that facility were forced to see Nassar for treatment per Geddart’s orders.

‘If you were injured, you were specifically instructed to see Nassar, not your family doctor,’ said the high school student.

Thomas how said she heard much about Nasssar and his ‘reputation’ before her first appointment, all of which was very positive.

‘I remember my coaches telling me to go see him, and I was actually quite excited,’ said the teenager.

‘Then I went into the back room, and that’s when everything changed. I was alone with him. He had me lie down on the table, and he sexually assaulted me.’

Judge Cunningham addressed Thomashow after she spoke, a practice that was also carried out in Ingham County by Judge Rosemarie Aquilina.

Her remarks were far briefer however than her predecessor. 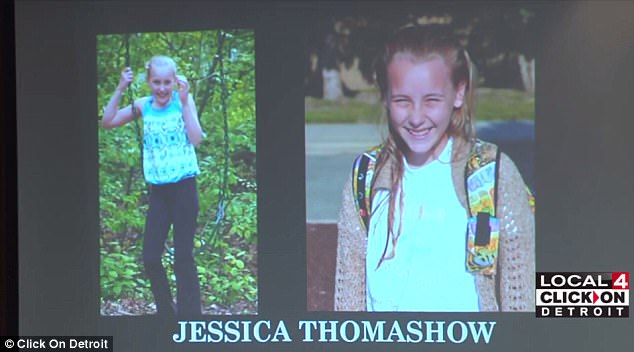 Horrific: Thomashaw, who is just 17, said she was 9 when Nassar molested her for the first time (Thomashaw above around the time that she was first abused)

Nassar was sentenced to 175 years in prison just last Wednesday after a highly emotional seven-day sentencing hearing in a Michigan courtroom.

‘I just signed your death warrant,’ said Judge Rosemarie Aquilinia, referencing the fact that Nassar would never again be a free man and die in prison.

Nassar had agreed to serve a minimum sentence of 40 years as part of a plea deal, with that prison time coming after he completes his 60-year federal sentence for child pornography charges.

He was expected to get a maximum of 125 years in prison, but Judge Aquilina went well beyond that mark.

Prior to that, the pedophile doctor addressed his victims in a brief statement, choosing to turn and face the women as he made his remarks.

‘Your words these past several days, your words, have had a significant emotional effect on myself and has shaken me to my core,’ he mumbled through tears.

‘I also realize what I’m feeling pales in comparison.’

He then added: ‘I will carry you words with me for the rest of my days.’

Those tearful words were revealed to be completely hollow however by Judge Rosemarie Aquilina, who proved that point by reading from the letter that Nassar had submitted to the court.

‘So I’m trying to avoid a trial to save the stress to my community, my family. But look what’s happening. It’s wrong.’

He then wrote about his victims in words that were a far cry from the statement he had made moments earlier in court.

‘I was a good doctor, because my treatments worked and those patients that are now speaking out were the same ones that praised and came back over and over,’ wrote Nassar.

‘The media convinced them that it was wrong and bad.’

The crowd gasped as the letter then read: ‘Hell hath no fury like a woman scorned.’

It was a shocking moment, and it seemed as if Judge Aquilina might be considering revoking the plea at one point.