A  last-minute Christmas shopping spree will begin today, but it may not be enough to save many struggling stores.

Dubbed ‘Panic Thursday’, the number of people rushing around high streets and shopping centres is expected to be up 60 per cent on a normal day.

With schools shut for the festive holiday, millions will be making a desperate bid to stock up at supermarkets and complete gift shopping – especially as many online companies have warned that delivery drivers are struggling to cope with the unprecedented number of orders.

Dubbed ‘Panic Thursday’, the number of people rushing around high streets and shopping centres is expected to be up 60 per cent on a normal day. Pictured are shoppers in Bristol 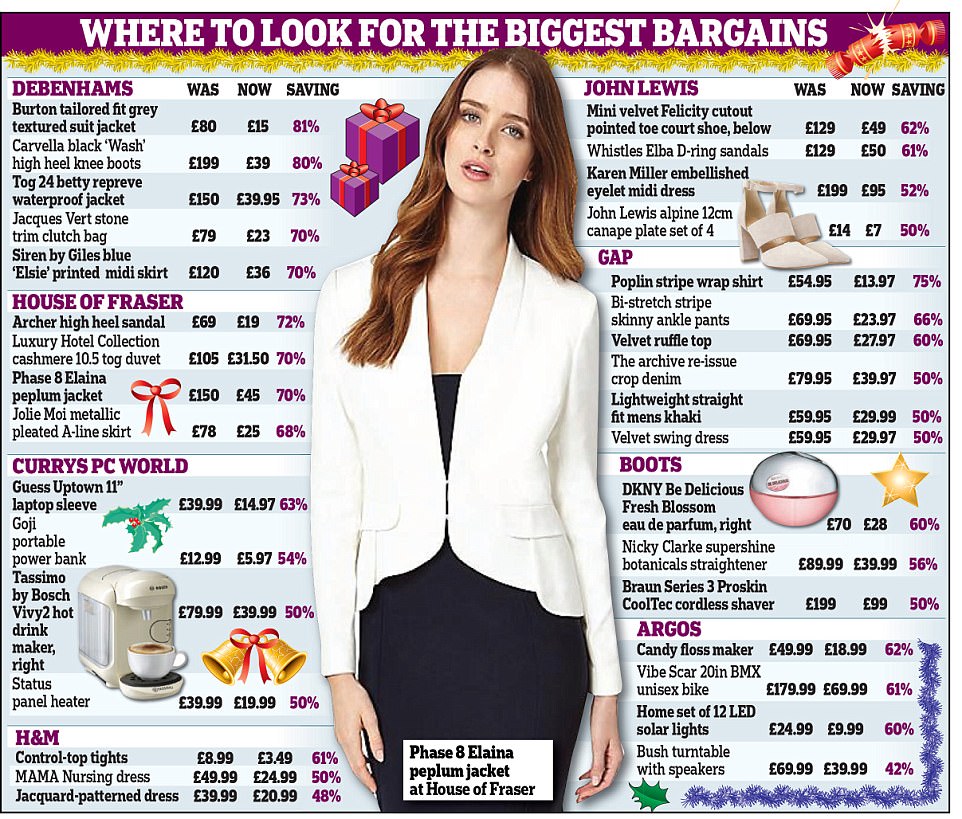 Major reductions: Savings of up to 80 per cent have been on offer from the likes of Debenhams and House Of Fraser, while chains such as Argos and Currys have also been heavily promoting deals 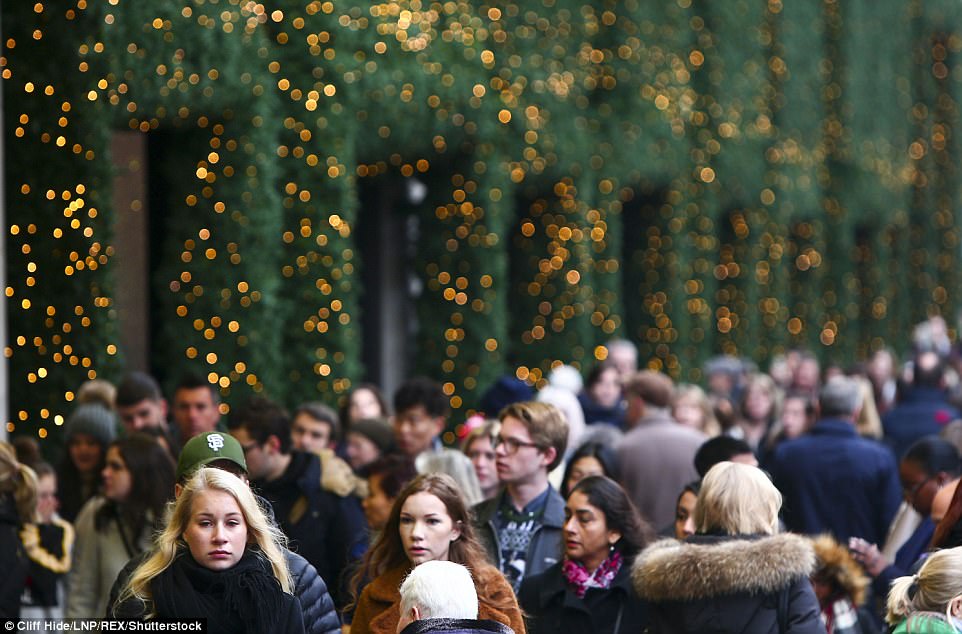 Fears about online orders not arriving before the Big Day have led to shoppers stepping out from behind their screens, such as these in Oxford Street

Steve Richardson, of retail analysts Shopper Trak, said: ‘With fears that online orders will not arrive before Christmas Day, shoppers will step out from behind their screens and take to the high street to finish their gift buying. Panic Thursday marks the start of the steady build-up of in-store footfall as we head towards the big day.’

Many stores have been running sales promotions since the Black Friday spending spree in November. Savings of up to 80 per cent have been on offer from the likes of Debenhams and House Of Fraser, while chains such as Argos and Currys have also been heavily promoting deals.

High street stores have been increasingly squeezed by the rise of internet shopping, and strong Christmas takings are all that stand between many being forced to close down in the new year. One report warns there is a 22 per cent increase in the number of stores which are in ‘significant financial distress’ compared to a year ago.

Toys R Us already faces closing 100 outlets with more than 3,000 redundancies, while there are also questions about the future of Steinhoff, the South African parent company of UK firms Poundland, Harveys and Bensons For Beds, over an accounting scandal that has seen its chairman and chief executive resign. 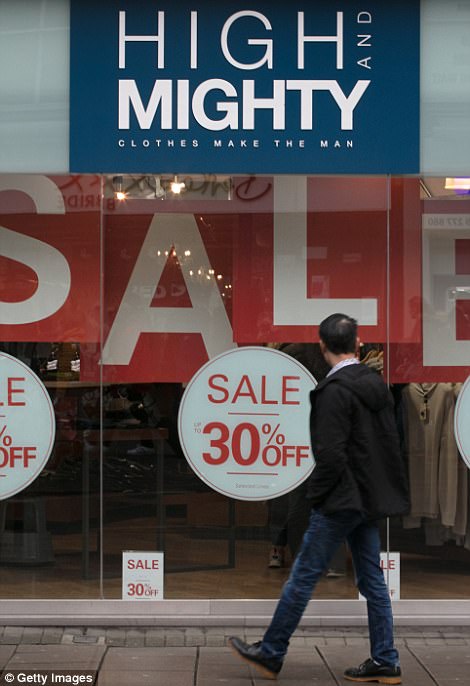 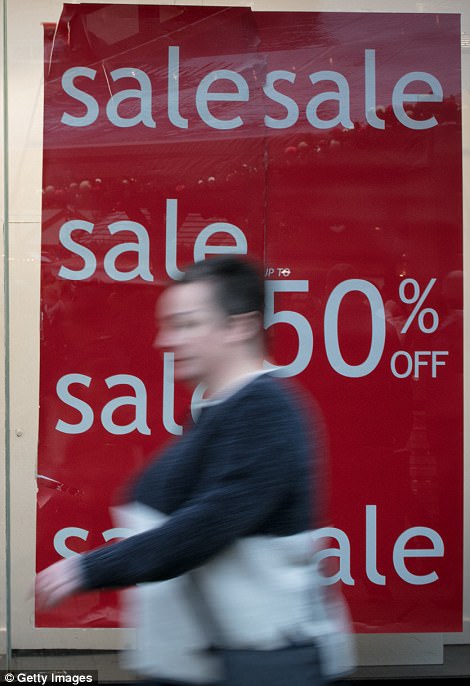 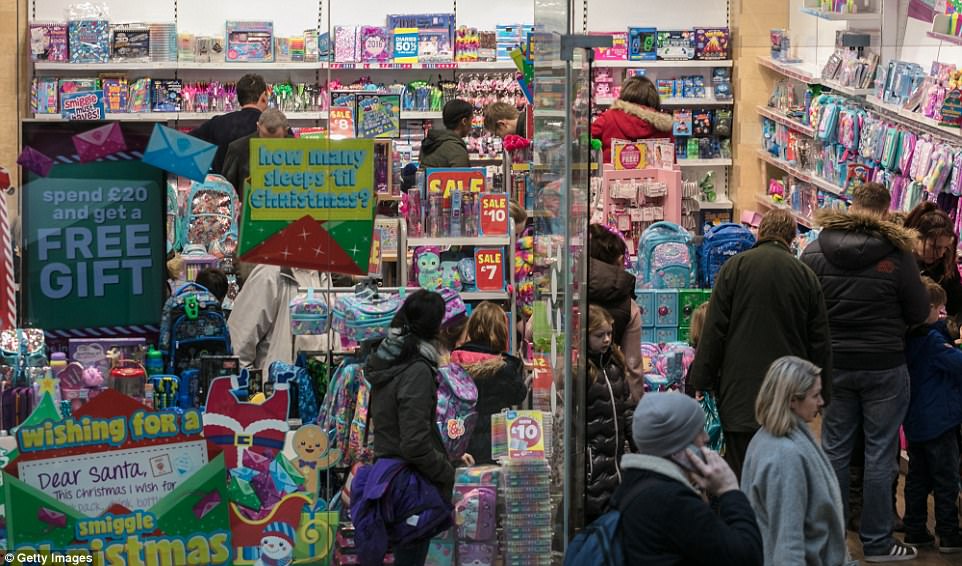 Shoppers browse in a toy shop in Bristol. Toys R Us faces closing 100 outlets with more than 3,000 redundancies

Research by business recovery experts Begbies Traynor shows the number of retailers in ‘significant financial distress’ is 43,677 – a rise of 22 per cent on a year ago. Spokesman Julie Palmer said: ‘Although this week’s milder weather might very well encourage a few extra shoppers to leave the fireside for a day of last-minute spending, I’m afraid it’s probably too little, too late.’

She added: ‘With Christmas Day just around the corner, retailers have all but run out of time to turn around their ailing fortunes after a particularly disappointing few weeks of trading following Black Friday. The increasingly frantic promotional and discounting activity we are seeing this week is simply not having the same effect on consumers as it once did.

‘Shoppers are savvier and prepared to search for the best deals, having grown wise to gimmicks and discounts on offer in store, which many now realise may not be as good as they first appear.’

Estimates by Shopper Trak suggest shopper numbers will be up 60 per cent on a typical Thursday and 37 per cent higher than a usual Friday. Saturday is expected to be the busiest day of the year to date, with customer numbers up 63 per cent as 14 million people hit the shops to spend £1.4billion, according to research by Voucher Codes and the Centre For Retail Research. 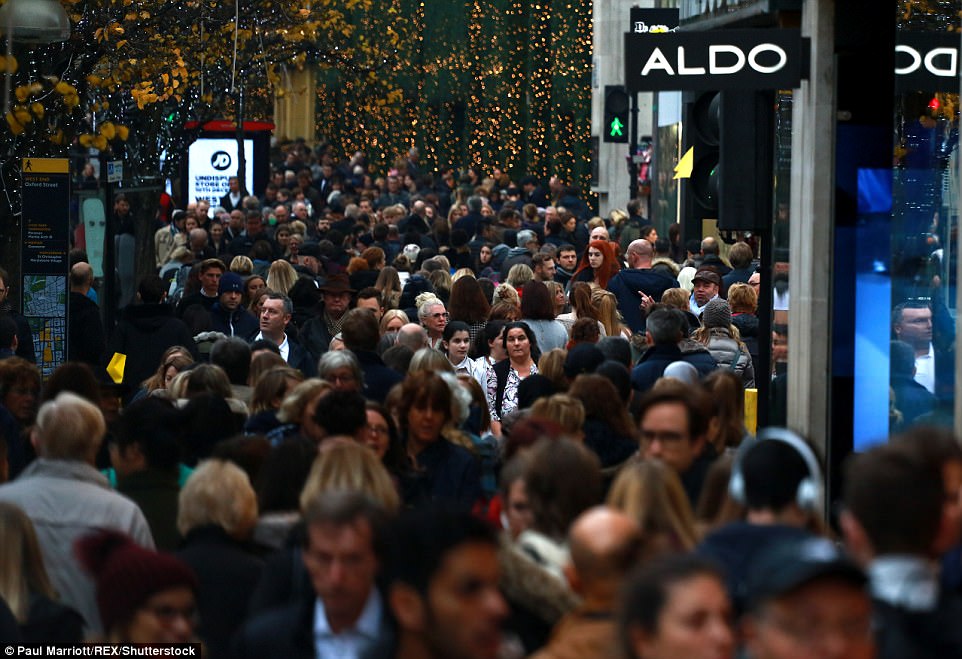 Saturday is expected to be the busiest day of the year to date, with customer numbers up 63 per cent as 14 million people hit the shops to spend £1.4billion

The Christmas getaway began last night as an estimated 1.3million drivers took to the roads in an attempt to beat weekend traffic misery.

Motorists were warned to expects jams lasting more than four hours today amid predictions that at least 20million will make car journeys over the festive period.

Rail works and strikes are expected to add more pressure to roads already clogged with shoppers and delivery drivers. 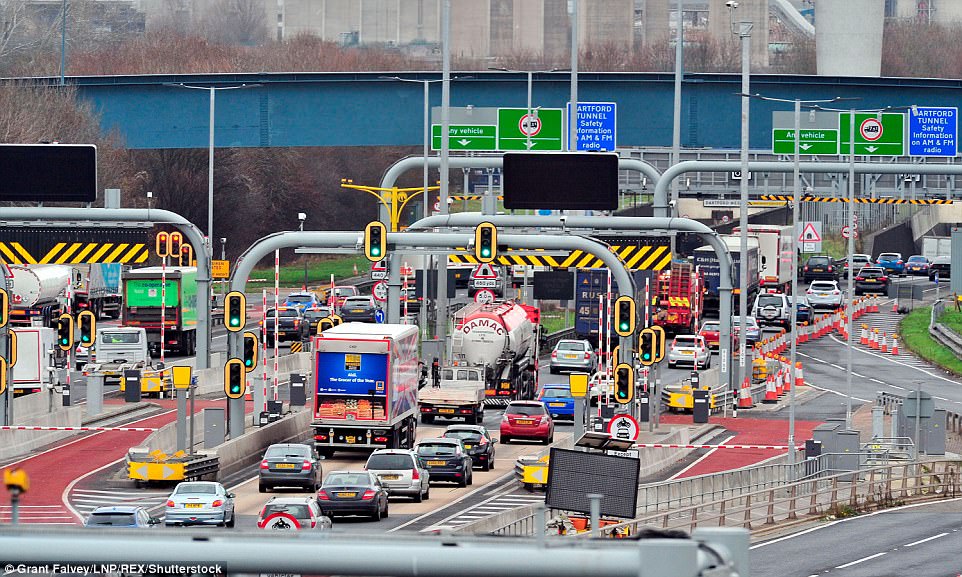 The annual getaway for families has come early this year as most schools have now broken up for Christmas.

Traffic is expected to peak tomorrow with more than 13million expected to make car journeys of at least 20 miles.

RAC spokesman Rod Dennis said: ‘We strongly urge drivers planning long journeys to avoid this day if they possibly can.’

Rail workers have announced another string of 24-hour strikes to pile further misery on passengers in the New Year.

Staff at six operating companies will walk out in the long-running dispute on the role of guards.

The strikes will hit passengers as many return to work after the festive period. They are also being clobbered by rail fare rises averaging more than 3 per cent – the biggest in five years.

RMT union members at South Western Railway, Greater Anglia, Merseyrail, Arriva Rail North and the Isle of Wight’s Island Line will walk out on January 8, 10 and 12, while those at Southern will strike on January 8.

Predicted black spots include a 65-mile stretch of the M6 from Haydock in Merseyside to Gailey in South Staffordshire, where drivers could face delays of more than four hours today.

Parts of the M1 in Bedfordshire and Leicestershire are also expected to experience jams lasting more than an hour, according to the traffic analysis firm Inrix.

The AA’s Vince Crane said the roads would be harder hit this year with Christmas falling on a Monday. He added: ‘Many drivers may hope that journeys would be spread across the weekend, but it means more days of traffic as the getaway from work on Friday is followed by the last major shopping opportunity on Saturday and visits to friends and family on Sunday.’ Network Rail’s £160million engineering project is likely to cause significant disruption as 32,000 workers tackle 260 projects across the country, closing or restricting major stations and lines. The works – mainly in London and the south east – are scheduled to start on Saturday and continue until January 2.

Inrix said traffic peaked last year at around 5pm on the Friday before Christmas day, with more than 300 jams recorded. The worst was a ten-mile queue on the A5 off the M1 that lasted more than five hours.

Highways England is lifting 400 miles of roadworks this year to ease disruption.

The weather is unlikely to result in serious travel difficulties as the forecast for Christmas is largely mild, although the Met Office has said fog and wintry showers may cause problems for some.

Chief meteorologist Steve Ramsdale said: ‘The early signs are that most of us will have a green Christmas rather than a white one and there’ll be some rain around. There may be some wintry showers in the North.’

More than 4.5million people are expected to go abroad over Christmas and the New Year. Heathrow is expecting 1.7million departing passengers during the period.