Last pink diamonds from famous Australian mine go under the hammer

‘Don’t be fooled by the rocks that I got. I’m still, I’m still Jenny from the block,’ Jennifer Lopez once sang, insisting she remained true to her humble roots in the Bronx.

The $1.2million pink diamond engagement ring given to her by Hollywood star Ben Affleck back in 2003 was arguably the most eye-catching trinket flaunted by J-Lo over the years.

Affleck’s choice of ‘rock’ for his ‘Jenny from the block’ would spark a craze for coloured diamonds among the mega-wealthy, with actress Blake Lively and singer Mariah Carey among those to join this rarefied club.

Unfortunately, Lopez and Affleck never did make it down the aisle – at least first time around. But now they have rekindled their romance almost two decades later. Perhaps J-Lo’s famous pink diamond might make a reappearance.

Even among the ultra pampered, pink diamonds are not something to be discarded at the back of the jewellery drawer.

The reason they are so highly prized is there are so few of them. And they are likely to be in even more short supply in the years to come.

Bidding closed yesterday for the last ever pink diamonds to come from Rio Tinto’s Argyle mine in the Kimberley, in Western Australia’s sparse northern region.

The mine, which produced 90pc of the world’s pink diamonds, was shut down after almost 40 years last November. It had been mined clean of sparklers over the years.

And of the 865m carats of rough diamonds unearthed, around 1,900 stones a year were pink. This would be barely enough to fill two champagne flutes, according to Rio.

A collection of 70 of the final stones to be discovered have been put up for sale in the final Argyle Pink Diamonds Tender.

This annual event, which is shrouded in secrecy, has become arguably the most highly anticipated in the diamond collectors’ calendar since it began in 1984 Antwerp, the diamond trading capital of the world. 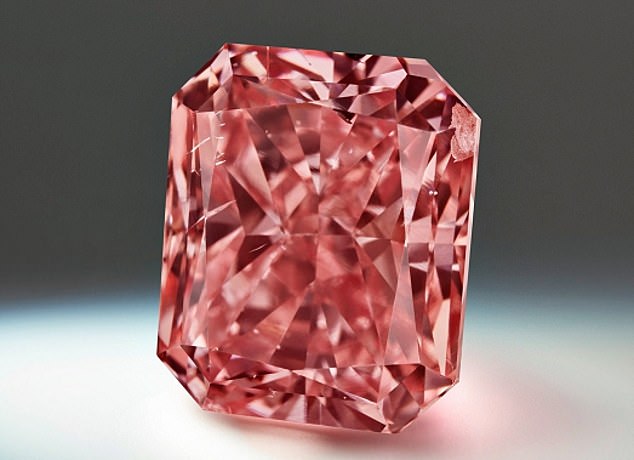 Star sparkler: The 3.47 carat ‘intense pink’ Argyle Eclipse is the largest diamond of its kind ever to be put up for sale

Around 100 traders, collectors and luxury jewellers, from Liverpool-based Boodles to Linneys in Perth, have been invited to make secret bids on them via a secure online portal since May.

The star of the show is the 3.47 carat ‘intense pink’ Argyle Eclipse, the largest of its kind ever to be put up for sale.

Jody Wainwright, a director at family-owned Boodles, has been bidding for Rio’s pink Argyle diamonds since the business was invited to join the tender in 2014. During that time, he has only managed to secure six stones.

‘The very basic thing about diamonds is supply and demand. And if you think about demand, with diamonds it’s what is beautiful and what is luxury and pink for ladies just is the colour.’

He added that pink diamonds are usually bought by savvy investors, rather than celebrities wanting to show off.

He said: ‘It’s about the colour. Pinks don’t come out much bigger than two carats. So it’s never a size that stops you in your tracks.’ 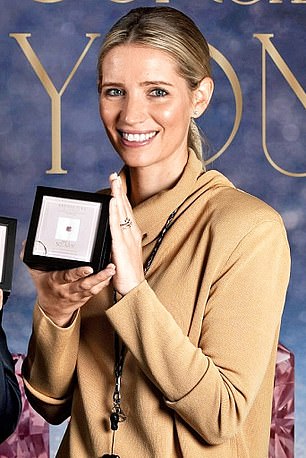 Pink diamonds represent the more glamorous side of Rio.

For almost a decade, Michelle Sherring, Rio Tinto Diamonds’ sales and business development manager, has been jet-setting around the globe to sell Rio’s pink diamonds.

This year, Covid has restricted the world tour to Antwerp, Singapore and Perth, where Sherring is based.

Potential buyers in other key markets like London and New York have had to make do with seeing these diamonds online before deciding whether to shell out millions for them. The buyers tend to be highly discreet, said Sherring, meaning they are unlikely to shout from the rooftops about their purchases.

‘As you’d expect with these incredibly rare diamonds we see prices stretching into millions of dollars per carat. When you consider our production of pink diamonds over 38 years would barely fill two champagne glasses you can understand this.’

She added: ‘Ultimately, we’re talking about the most finite of diamonds – rarity and beauty combined to produce a very, very special diamond.’

Pink diamonds owe their colour to an abnormality in the crystal structure that occurred when they formed in the Earth’s crust millions of years ago.

Often referred to as ‘Fancy Coloured Diamonds’, some colours are rarer than others.

Red and pink are the most sought after, but blue, green, orange, yellow and champagne diamonds are also highly prized.

On average pink diamonds are 35 times the price of a white diamond. They have proved to be a fabulous investment, too, with prices sold at annual tender increasing by 600 per cent since 2000.

Unfortunately for aspiring collectors, the closure of Rio’s mine in the Kimberley means the world’s primary source of pink diamonds has now disappeared.

‘Everyone would love another Argyle, but its very, very unlikely to occur,’ says Sherring.