FARGO, N.D. (AP) – The Latest on the trial of William Hoehn, who is charged with conspiracy in the killing of a pregnant woman whose baby was cut from her womb (all times local):

A North Dakota woman has testified that she never “explicitly” told her ex-boyfriend that she planned to murder their pregnant neighbor and cut the baby from her womb.

Brooke Crews pleaded guilty to murder and is serving life in prison without parole in the killing of 22-year-old Savanna Greywind in August 2017. Crews is testifying Tuesday at the trial of William Hoehn, who is charged with conspiracy to commit murder in the death.

Hoehn, of Fargo, has admitted to helping cover up the crime but says he didn’t know Crews was going to kill Greywind for the baby.

Crews has testified that she felt pressured by Hoehn to “produce a baby,” but under cross-examination by defense attorney Daniel Borgen, Crews said Hoehn didn’t tell her to kill Greywind for the newborn.

William Hoehn, center, listens to the charges read against him on Wednesday, Sept. 19, 2018, in Fargo, N.D., for the murder of Savanna LaFontaine-Greywind, a 22-year-old whoss baby was cut from her womb. Hoehn is charged with conspiracy to commit murder in the death of 22-year-old Savanna Greywind, who was eight months pregnant when she was killed in August 2017. (Michael Vosburg/The Forum via AP, Pool)

A North Dakota woman convicted of killing her pregnant neighbor by cutting the baby from her womb says police missed the victim’s body and her newborn in three searches of her apartment.

Brooke Crews is testifying in the trial of her ex-boyfriend, William Hoehn, who is charged with conspiracy to commit murder in the August 2017 death of 22-year-old Savanna Greywind of Fargo.

Greywind was killed after going to the couple’s apartment to help with a sewing project. Her disappearance sparked massive searches before her body turned up in the Red River near Fargo a few days later.

Greywind’s baby survived. Crews testified that during one police search of the couple’s apartment, Greywind’s body was in the bathroom closet and the baby was covered up next to Hoehn on a bed.

She says Hoehn eventually moved Greywind’s body to a hollowed-out dresser and the two of them took it out of the apartment.

A North Dakota woman convicted of killing her pregnant neighbor by cutting the baby from her womb says her then-boyfriend told her that she “needed to produce a baby.”

Brooke Crews testified Tuesday that she lied to William Hoehn, telling him she was pregnant, in order to prolong the relationship.

Crews says Hoehn didn’t believe her and made comments about 22-year-old Savanna Greywind being pregnant that she understood to mean he wanted their neighbor’s baby. Crews says nevertheless that Hoehn’s appeared surprised when he came home to discover she had sliced the child from Greywind’s womb.

Hoehn is charged with conspiracy to commit murder in the killing of Greywind. He has admitted to covering up the crime and pleaded guilty to kidnapping, but says he didn’t know Crews’ planned to kill Greywind and take the baby.

A woman convicted of killing a pregnant North Dakota woman by cutting her baby from her womb is testifying in the trial of her former boyfriend.

William Hoehn (hayn) is charged with conspiracy to commit murder in the August 2017 death of 22-year-old Savanna Greywind. Brooke Crews, who pleaded guilty earlier and was sentenced to life in prison without parole, took the stand on Tuesday, the sixth day of the trial.

Hoehn has admitted that he helped Crews cover up the crime, but has said he didn’t know of her plan to kill Greywind. Hoehn has pleaded guilty to other charges in the case. 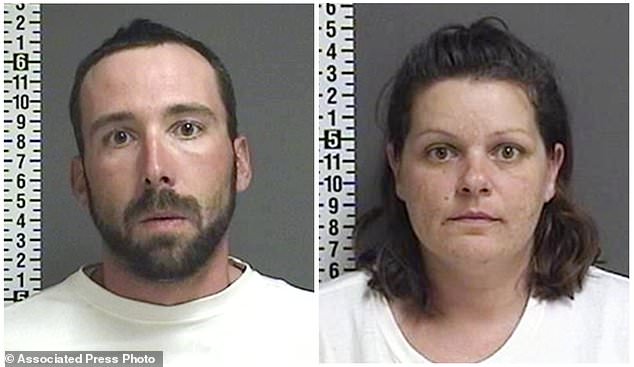 FILE – This combination of file photos provided by the Cass County Sheriff’s Office in Fargo, N.D., shows William Hoehn, and his girlfriend Brooke Crews, the two people charged in connection with the murder of Savanna Greywind in North Dakota in August 2017. Greywind was eight months pregnant. Crews, ultimately admitted killing Greywind and cutting her baby from her womb. Hoehn, goes on trial Tuesday, Sept. 18, 2018, for conspiracy to commit murder. He has admitted helping cover up Greywind’s murder. (Cass County Sheriff’s Office via AP, File)