Law & Order: SVU mainstays Ice-T and Christopher Meloni laugh off claims of an ugly rift between them

Ice-T, 64, took to Twitter on Monday posting an email he had received from The National Enquirer seeking comment on a story alleging they have been ‘feuding since’ Meloni’s ‘return to the franchise’ in 2021 on the series Law & Order: Organized Crime.

The email stated that ‘sources told The ENQUIRER that the former rapper has grown envious of the attention that Mr. Meloni has received since coming back.’

The latest: Law & Order: SVU stars Ice-T, 64, and Christopher Meloni, 61, refuted a rumored rift between them Monday in a series of social media posts

Ice-T denied any problems with Meloni, 61, as he said he had forwarded the email to his longtime colleague on the Dick Wolf franchise.

‘Just sent this email over to my guy @Chris_Meloni,’ said Ice-T. ‘Clownass MFs trying to make up Drama outta thin air… WOW… MFs are really on that BS.’

Meloni shared an image of the email, writing, ‘So…⁦ [Ice-T] was sent this. He was kind enough to let me know we were feuding.’ 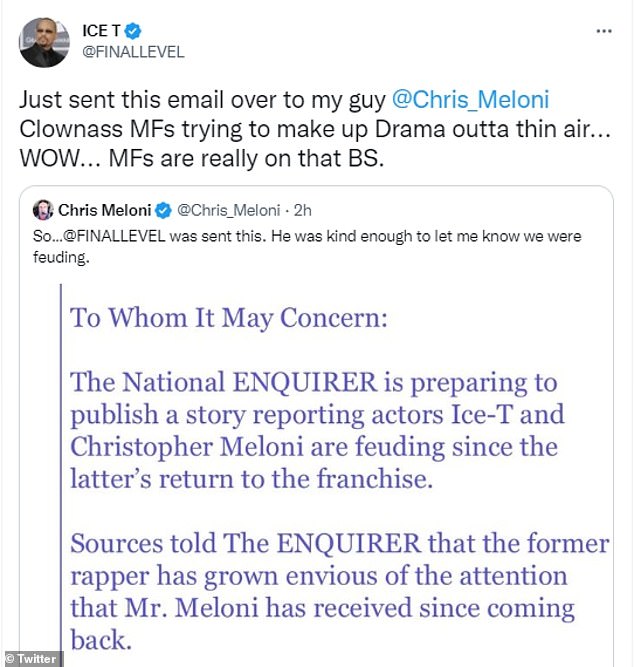 Ice-T has played the role of Detective Odafin ‘Fin’ Tutuola since 2000, spending 11 seasons performing alongside Meloni.

After leaving the franchise after its 12th season in 2010, Meloni reprised the role of Detective Elliot Stabler in 2021 on Law & Order: Organized Crime, which has had crossover storylines with Law & Order: SVU.

Other longtime characters in the principal cast of the NBC series include Mariska Hargitay as Detective Olivia Benson (1999-2023), Dann Florek as Captain Don Cragen (1999-2021); and Richard Belzer as Detective John Munch (1999-2016). 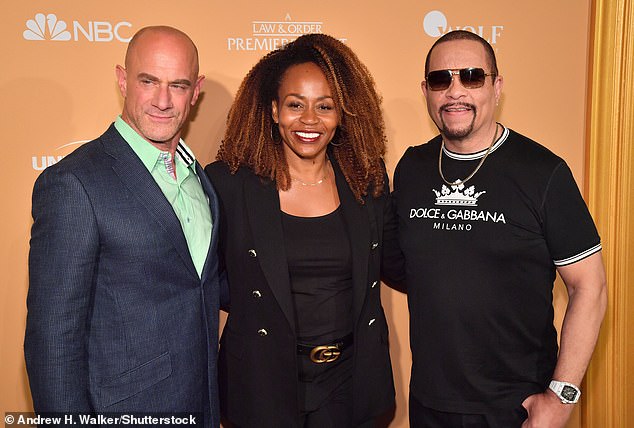 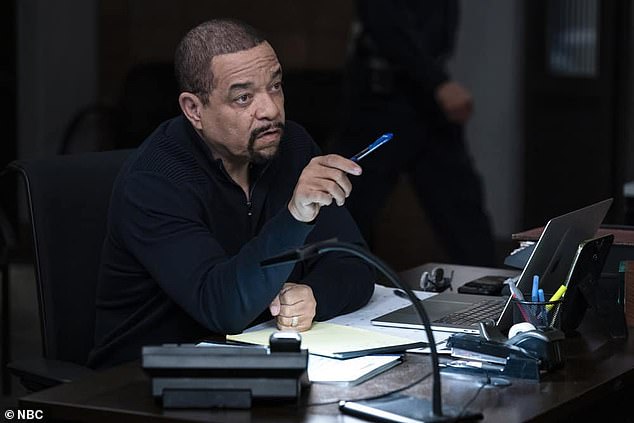 Ice-T discussed his longtime friendship with Meloni in a 2021 appearance on The View ahead of his return to the franchise.

He noted the stayed in touch with Meloni ‘the whole time’ he was away from the series ‘because we’re friends in real life.’

He added: ‘To have him come back and watch what’s gonna happen with him and Mariska, everybody’s just waiting for that moment, but it’s good, he’s a friend, I worked with him for 12 years, we became close friends.’