A 19-year-old law student mistakenly killed in a drive-by shooting died from a single wound to the chest, a post-mortem has confirmed.

Aya Hachem was on her way to a Lidl supermarket when she was hit by one of several shots fired from a vehicle near her home in Blackburn, Lancashire, on Sunday.

Three men aged 39, 33 and 36 continue to be questioned on suspicion of her murder after their arrests on Monday.

Police believe Miss Hachem was not the intended target of the broad daylight attack which took place on a busy town centre main road.

Aya, the eldest of four siblings, had arrived in the UK with her family as refugees after fleeing Lebanon when she was still a girl. Her old school paid tribute to her as ‘a beautiful young girl who fled her home country in search for a better life in the UK’.

The second year University of Salford student died in hospital a short time after emergency services were called to the scene in King Street at around 3pm.

On Tuesday, Lancashire Police said a post-examination showed she died from a single gunshot wound to the chest.

Reports have said that her body will now be flown to Lebanon for her burial.

In an emotional statement, her parents Samar and Ismael said: ‘Our beautiful 19-year-old daughter Aya has been taken from us in the most horrific circumstances.’

‘She was the most loyal, devoted daughter who enjoyed spending time with her family especially her brothers and sisters Ibraham, Assil and Amir.’

Senior Investigating Officer Det Supt Andy Cribbin said: ‘Our determination to find who was responsible for the death of Aya continues and we have a large team of detectives working on the inquiry.

University of Salford student Aya Hachem (pictured) died shortly after she was shot from a car window in Blackburn, Lancashire at around 3pm yesterday

‘We know that a lot of people have expressed their support for the police investigation and I would like to thank them for that.

‘However, we know of a number of videos of the incident are on social media and it is important that people formally report these to us as they are potential evidence.

‘We would also ask people, even if they are well-intentioned, not to share these videos out of respect for Aya and her family.

‘Similarly, I would urge people not to speculate online about the cause of the incident and to instead share what they know with us, as their information could prove vital.’

Witnesses to the tragedy claim the gunman was firing at the Quick Tyre and Quick Shine car wash, but missed and instead shot the University of Salford student.

Ms Hachem, who was a young trustee with the Children’s Society, had been close to her home when she was shot and killed on King Street. 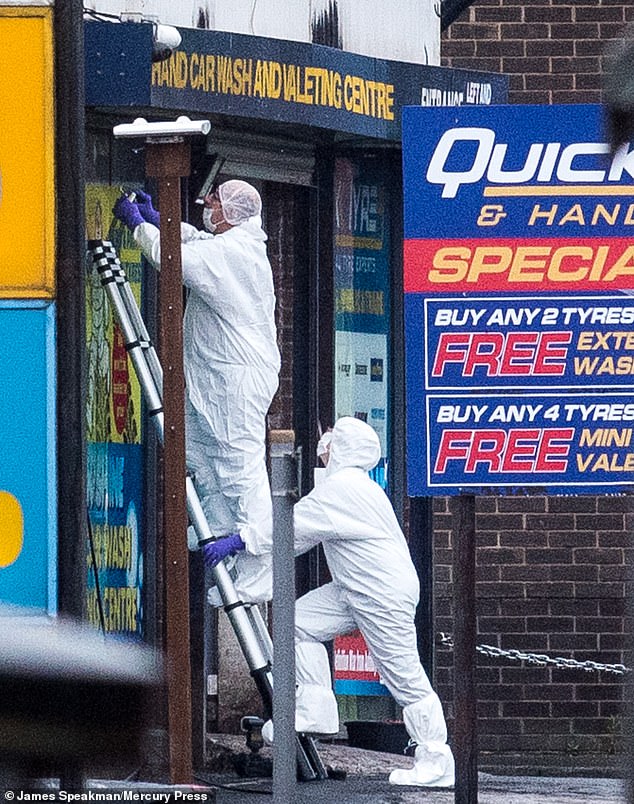 Pictured: Police forensics officers look at a car wash and valet inside the cordon on King Street in Blackburn

Aya had excelled at high school in Blackburn and had dreamed of becoming a solicitor after completing her degree. She had just completed her exams and was learning to drive, her family said.

One witness to the tragedy said online that Ms Hachem had been ‘shot to the floor from a car window’ as she walked down the street.

‘A woman casually walking down the street gets shot to the floor from a car window,’ they said. ‘Get me out of this place. Shaken to f***. Talk about being in the wrong place at the wrong time.’

Another added: ‘The aim, I believe, was to shoot out the glass in the big main window of the tyre place near Lidl. He missed and shot the lady.’ 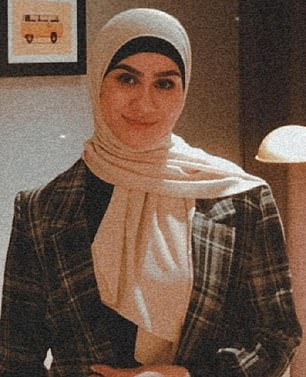 Ms Hachem (pictured), who was a trustee with the Children’s Society, had been just 100 metres from her home when she was shot and killed on King Street

A passerby on King Street also today suggested the car wash was the target of the attack, following a previous dispute between the two parties.

‘It is some sort of dispute regarding the car wash,’ he said. ‘There had been a fall out and this was a revenge attack.’

Detectives from Lancashire Police’s Major Force Incident Unit were seen around the car wash today in protective suits as the investigation into Ms Hachem’s death continued.

The murder investigation centres around a car ‘with a number of occupants’ which was spotted leaving the scene shortly after Ms Hachem was shot.

A vehicle matching its description – a light-coloured, possibly metallic green Toyota Avensis – was found abandoned on Wellington Road, a short distance away from the scene.

Police added there is ‘no evidence to suggest Aya was the intended target of this attack and every indication is that she was an innocent passerby.’

Ms Hachem had recently passed her second-year law exams at the University of Salford and was the Vice Chairperson of the university’s law society. 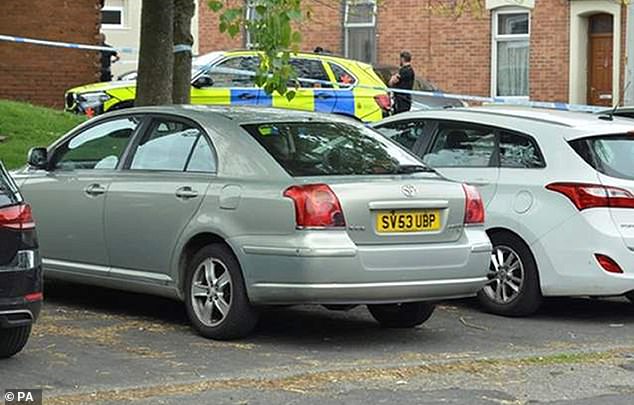 Pictured: The Toyota Avensis police believe was involved in the shooting of Ms Hachem

‘They who broke our back with your horizon you were all dream, science and morals. Oh Allah, inspire us with patience and solace.’

Her former teachers at Blackburn Central High School have described her as a model student who was hardworking and determined to be the very best she could be.

A statement released by the school read: ‘She had lots of friends and was involved in helping others by organising charity events.

‘A beautiful young girl who fled her home country in search for a better life in the UK.

‘At school she embraced every opportunity and was one of the students whose achievement we have celebrated on numerous occasions, an example of what is possible

‘She and will always be remembered for her diligence, her beautiful character and her humble nature.’ 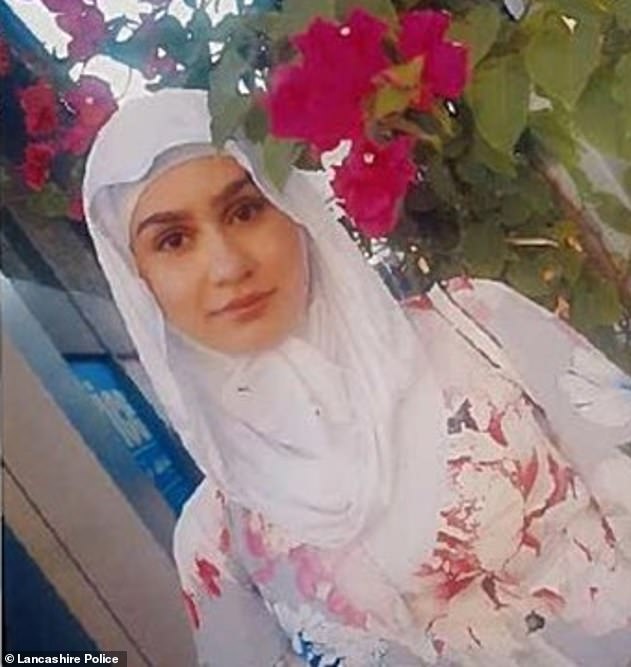 Ms Hachem (pictured), who was a young trustee with the Children’s Society, had been close to her home when she was shot and killed on King Street

In another touching tribute, Noreen Hussain added: ‘Aya Hachem was exactly the type of young woman I’d love for her to aspire to be like. I therefore write this with a very heavy heart.

‘As at no point would her parents have imagined she would be taken away during a turbulent time for the world in such a tragic way.

‘A mindless gunman has robbed Aya of her life and her family and friends and all those in society, of the good she was doing for others.

‘Such a noble and caring soul and intelligent and bright young person.’

The teenager, whose family had fled war-torn Lebanon, was found ‘unresponsive’ on the ground after gunshots were heard in the area around King Street on Sunday.

Armed officers, along with as many as seven squad cars and a helicopter, attended the scene and the victim was rushed to hospital, where she sadly died a short while later. 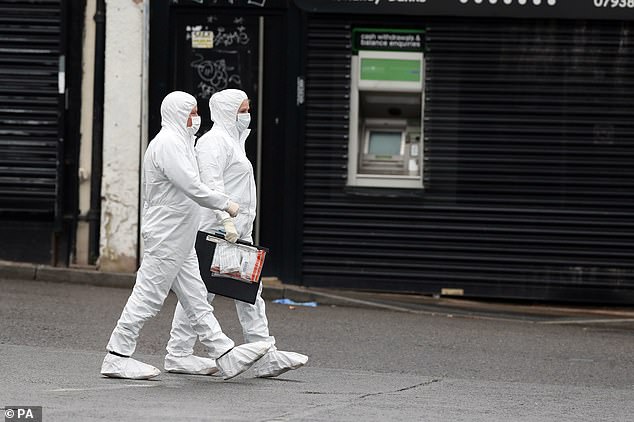 Pictured: Forensics officers on King Street, Blackburn after the shooting of Aya Hachem 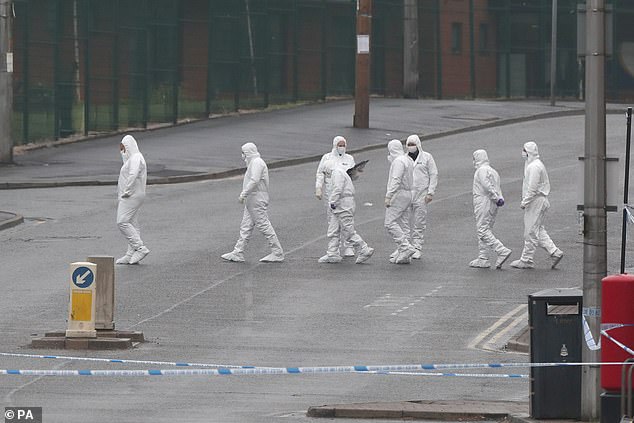 Her father, Ismail Hachem, paid tribute to his ‘strong’ daughter in a Facebook post today (Pictured: Police on the scene)

The Asylum and Refugee Community (ARC) Project in Blackburn paid tribute to the ‘beautiful’ and ‘much loved’ Ms Hachem in a Facebook post today.

‘With great sadness and heartache we have to share with you that we have lost Aya, beloved eldest daughter of Samar and Ismael from Lebanon,’ a statement said.

‘Aya, one of our own, lost her life in a horrific senseless attack, randomly caught up in a shooting outside Lidl, King Street, Blackburn as she walked past at around 3pm on Sunday.

‘Aya, a beautiful 19 year old young woman from Lebanon, had just passed her 2nd year law exams at Salford University and had a dream and ambition to study international law. 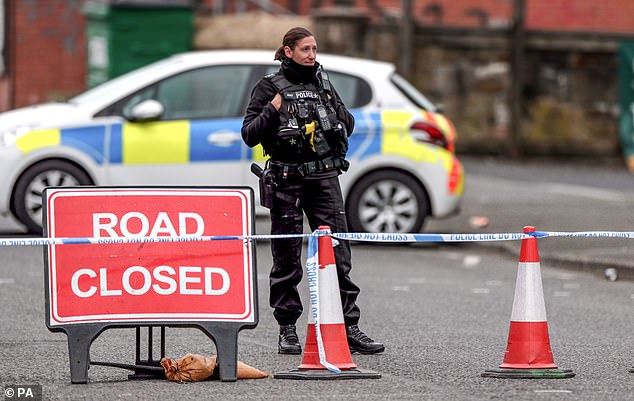 Pictured: An armed police officer at the scene on King Street, Blackburn, today following the death of a woman from a gunshot wound on Sunday 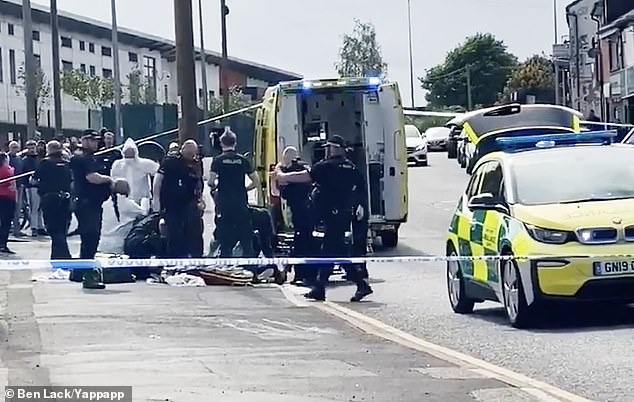 Armed officers, along with as many as seven squad cars and a helicopter, attended the scene and the victim was rushed to hospital

The Children’s Society Chief Executive, Mark Russell, said: ‘We are deeply saddened to learn of the death of one of our young trustees, Aya Hachem.

‘She was a truly remarkable young woman, and an inspiring voice for children and young people. Our thoughts are with her family at this awful time.’

Friends of the ‘beloved’ teenager have raised more than £25,000 in just 12 hours to build a Masjid – a mosque – in her honour in west Africa.

In a JustGiving post, Hannan Qazi wrote: ‘I urge you all to share and donate and grant this beautiful reward to our late sister.

‘The Masjid will be built in association with Muslim Hands and built in Niger, West Africa.’

In an urgent appeal for witnesses, Terry Woods, of Lancashire Police, said: ‘This was an appalling and senseless attack on an innocent young woman, whose life was cut short while she was simply out doing some shopping. 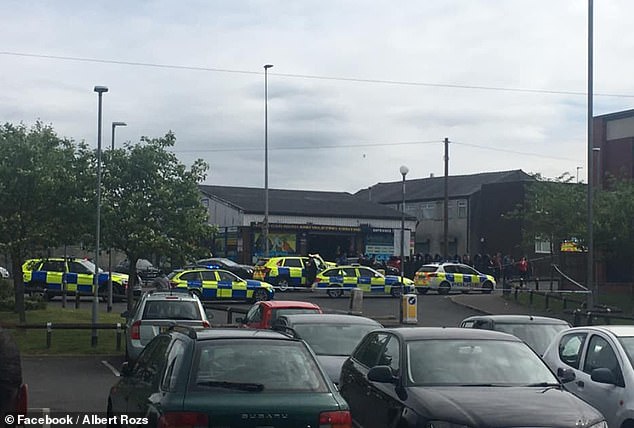 Police are seen on King Street today where a woman, 19, was shot and later rushed to hospital where she was pronounced dead

‘First and foremost our condolences are with her family, who have lost their daughter during the holy month of Ramadan. For her life to have been cut short like this is unthinkable and her family are understandably utterly distraught.

‘We are now asking anybody information to come forward. We know King Street was reasonably busy at the time of the attack and there will have been witnesses in the areas of King Street and Whalley Banks, near Lidl and the A674, who may have seen something or who may know who is responsible.

‘We believe a green-coloured Toyota Avensis was used to commit the offence, and this car was later recovered nearby. If you saw the car in the area of King Street and Whalley Banks, or if you saw it being abandoned on Wellington Road, again we would urge you to get in touch.

‘Similarly if you have information about who had been using this vehicle either on the day of the attack or in the weeks preceding, please tell us.

‘We are also still appealing for anybody with mobile phone, CCTV or dashcam footage taken in the area between 10am and 4pm yesterday to send it to us. 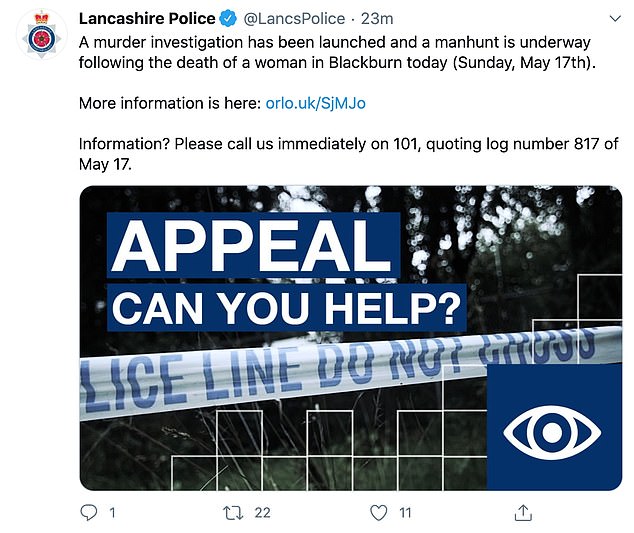 ‘We appreciate people may not want to get involved and may be reluctant to come forward, but an innocent young woman has been killed in broad daylight and we are asking anybody with any information at all to search their consciences and get in touch to tell us what they know.’

The force is appealing for any information from people who were near the murder scene on King Street – even if they were flouting lockdown rules.

DS Holmes added: ‘We appreciate this will have caused a lot of worry in the community, but we have deployed significant additional resources, including armed officers, to carry out high visibility patrols in the area to provide reassurance to residents.

‘Anyone with concerns or questions is welcome to speak to those officers.’

Anyone with information is asked to get contact the police on 101, quoting log number 817. Alternatively, information can be provided anonymously to Crimestoppers on 0800 555 111.