Leading clubs are lobbying UEFA to allow them to return home between matches when they play in the Champions League and Europa League next month.

The coronavirus pandemic means European club football’s two main competitions will use a one-leg knockout format from the quarter-finals onwards. The final rounds of the Europa League will run from August 10-21 across four cities in Germany, and the Champions League from August 12-23 in Lisbon.

With teams given up to six days’ break between the quarter-finals and semi-finals, Sportsmail understands many clubs are keen to travel back and forth, rather than remain in Germany. 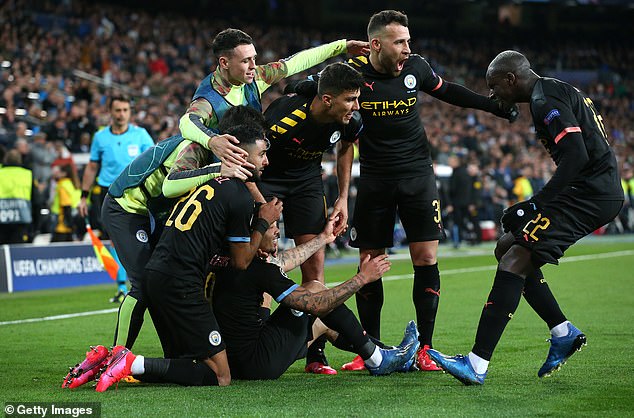 With a first leg lead over Real Madrid, Manchester City will be looking to seal a quarter-final berth in the Champions League with Lisbon hosting all matches from the final eight onwards

They would prefer to use their own training and medical facilities rather than spend up to two weeks at an unfamiliar base. However, senior figures at UEFA would rather keep the teams in Germany to reduce the risk of Covid-19 infection during the tournament.

It is thought the protocols for the ‘Final Eight’ of the Champions League and Europa League will be published next week, after the last-16 ties have been decided.

Manchester City are due to face Real Madrid in their Champions League last-16 second leg at the Etihad on August 7, leading 2-1 from the first game, while Chelsea must overturn a 3-0 deficit if they are to progress against Bayern Munich.

In the Europa League, Manchester United are 5-0 up on Austrian club LASK Linz while Wolves’ tie with Olympiacos is poised at 1-1 ahead of the second leg at Molineux next Thursday.