Leaf blowers are ‘fatal’ to insects and should be avoided, German government warns

Leaf blowers are ‘fatal’ to insects and should not be used unless they are ‘indispensable’, German government warns

German authorities are discouraging their citizens from using leaf blowers over fears that the tools cause harm to insects, small animals and the environment.

The Ministry for the Environment also said that the devices were too loud and contributed to air pollution.

In a statement, they encouraged the public only to continue using leaf blowers if they were ‘indispensable’.

However, the ministry stopped short of issuing an out-and-out ban on the gardening tools.

German authorities are discouraging their citizens from using leaf blowers ,pictured, over fears that the tools cause harm to insects, small animals and the environment

Germany’s Ministry for the Environment issued the guidance around the use of leaf blowers in response to a request by a Green MP.

Leaf blowers and vacuums have the potential to be ‘fatal to insects in the foliage’, the ministry said in a statement.

‘There is a risk that small animals are absorbed or blown and thereby damaged,’ they added.

The move comes in the wake of various studies that have found that insect numbers are plummeting both in Germany and worldwide.

In fact, a 2017 study has suggested that flying insect numbers in 60 protected sites across Germany have fallen by more than 75 per cent in the last 30 years.

Furthermore, a global study published in February reported that around 40 per cent of insect species are undergoing rapid rates of decline.

Concern has been heightened over recent decreases in bee populations, with the animals pollinating around a third of food plants and 80 per cent of flowers.

Experts believe that the decline in insects is being triggered by climate change, intensive agricultural practices and pesticide use.

In light of such findings, the German government launched a €100 million (£85m/$113m) action plan to protect insects in September.

The project will see environmental regulations strengthened and the use of pesticides — such as the weed killer glyphosate — restricted in the coming years. 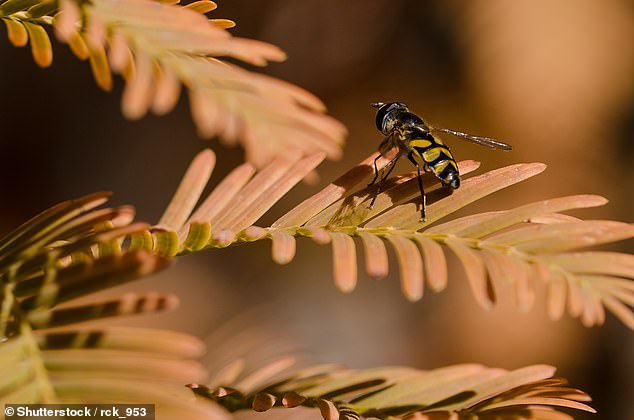 Leaf blowers and vacuums have the potential to be ‘fatal to insects in the foliage’, the ministry said in a statement. Pictured, a bee rests on autumnal foliage

‘Leaf blowers are not only deafeningly loud and pollute the air through their internal combustion engines, but they also harm the soil biology seriously,’ ministry expert for species protection Silvia Bender told the newspaper Augsburger Allgemeine.

‘In addition to leaves, insects and spiders are sucked up and chopped, and plant seeds are destroyed.’

‘We therefore strongly recommend property owners and municipalities to refrain from leaf blowers and leaf vacuum cleaners and instead resort to rakes and rakes.’

Noise pollution from leaf blowers can reach as high as 90–120 decibels — as loud as a helicopter taking off or a jackhammer being operated.

WHAT IS THE HONEYBEE CRISIS?

Honeybees, both domestic and wild, are responsible for around 80 per cent of worldwide pollination, according to Greenpeace.

But bee colony collapses across the globe are threatening their vital work.

Bees are dying from a combination of pesticides, habitat destruction, drought, nutrition deficit, global warming and air pollution among other factors.

The global bee crisis can potentially be solved if dangerous pesticides are eliminated, wild habitats are preserved and ecological agriculture is restored, according to Greenpeace (file photo)

Greenpeace has reported: ‘The bottom line is that we know humans are largely responsible for the two most prominent causes: Pesticides and habitat loss.’

This is important for a number of reasons, chief among them the amount of work bees put into our food production.

Greenpeace has suggested the following solutions to the problem:

In addition, the German authorities noted one other unpleasant health consideration arising from the use of leaf blowers in public spaces.

‘In addition to soil bacteria, pathogens contained in dog excrement can be whirled up,’ the ministry cautioned.

‘This may cause health hazards to people in the area, but especially those working with the equipment.’