Leah Willimson on how endometriosis left her ‘on the bathroom floor’

The captain of England’s women’s football team has opened up about her painful endometriosis and how it affects her performance on the pitch.

In a candid interview with the January edition of Women’s Health, Leah Williamson revealed how the condition, where tissue similar to the lining of the uterus grows in other places, has had a ‘debilitating’ effect on her game – once causing so much pain she was left in agony ‘on the bathroom floor.’

The 25-year-old from Milton Keynes, who led the Lionesses to victory at the Women’s Euros this summer, revealed she suffered from anxiety during the competition, fearing a bad period would keep her from performing.

She also criticised the Football Association, saying that the FA’s refusal to share men’s facilities with women in recent decades had left the female game ’50 years behind.’

In a candid interview with the January edition of Women’s Health, Leah Williamson, 25, revealed the condition, where tissue similar to the lining of the uterus grows in other places, has had a ‘debilitating’ effect on her game and has left her ‘on the bathroom floor.’ (pictured during the Euros’ game opposing England and Northern Ireland in Southampton in July)

Speaking of her debilitating endometriosis, Leah said: ‘Before the Euros I had a concussion, which they say can really impact your next period, and it was bad – like, really bad.

‘You know when you’re on the bathroom floor and literally like: “I can’t move.” When it’s too late to take the tablets because I’m, like, in it now.’

The prospect of a bad period proved highly anxiety-inducing for Leah, especially before England’s qualifying game versus Norway last year.

‘I was like, “it cannot happen”. Like, I actually won’t be able to play,’ the athlete said. 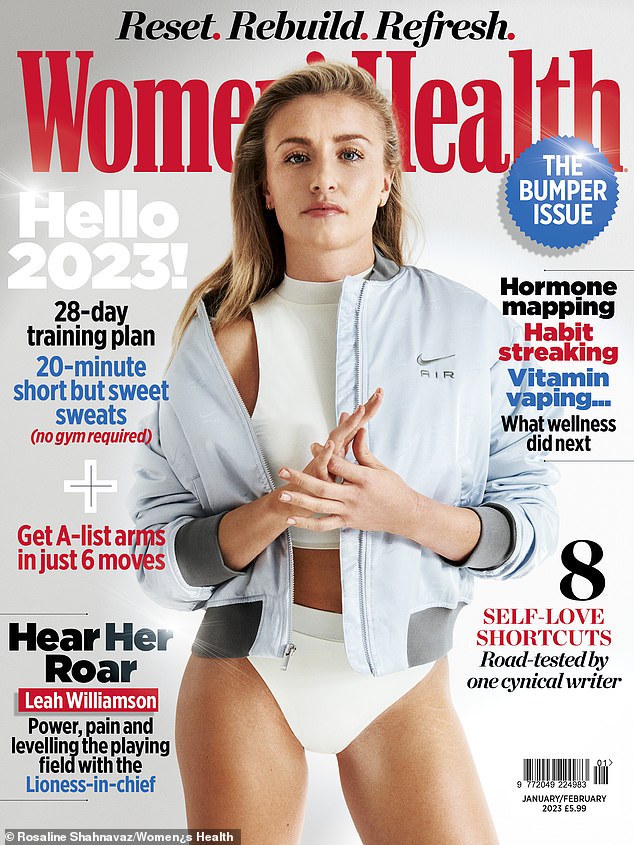 The 25-year-old from Milton Keynes, who led the Lionesses to victory at the Women’s Euros this summer, revealed she suffered from anxiety during the competition, fearing a bad period would keep her from performing 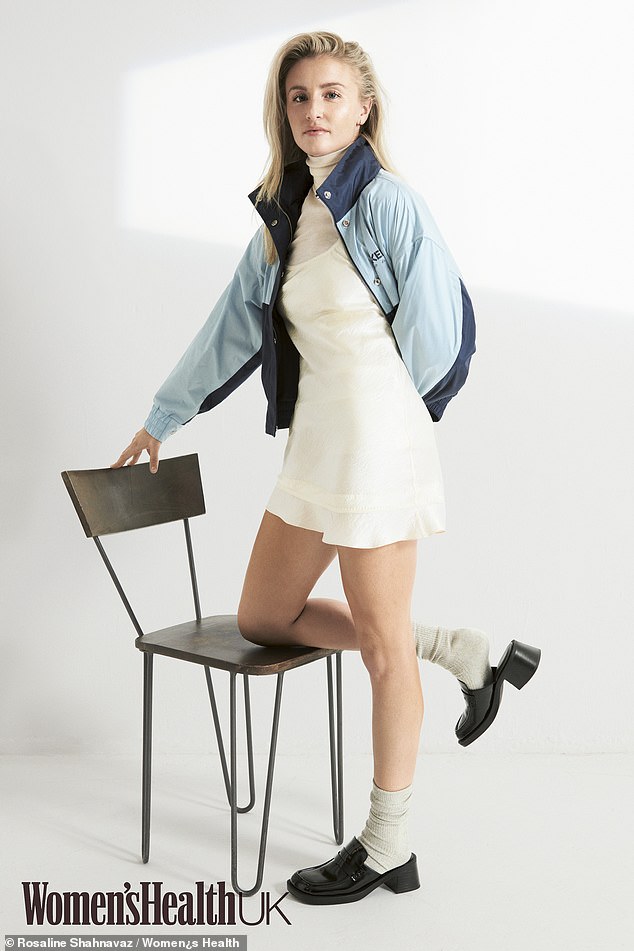 Having a bad period proved highly anxiety-inducing for Leah, especially before England’s game versus Norway during the Euros, she revealed

‘[Having an endometriosis flare up] is a big fear when you get to a tournament not injured…I don’t change too much around [my cycle] now. Unless I’m on the floor. And then I’m like: “I won’t make it today”.’ she added.

And while Leah said she tried not to let the condition affect her game, the issue has grown harder to ignore with age.

‘I’m a professional athlete, I’ve always been like, ‘let’s get on with it’. But you get to a certain age when you actually say: “this is a really big f****** problem”. I’m pretty sure if men had periods we would have figured out a way to stop them by now without doing any damage,’ she said. 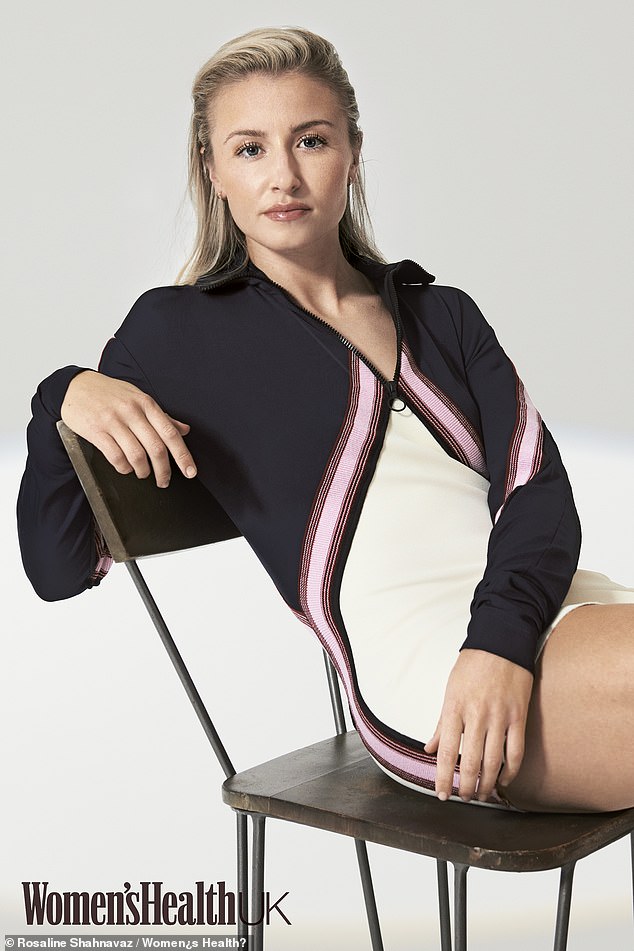 She also revealed that the pressure of representing Arsenal and England at the Euros has taken a toll on her mental health.

‘I felt like I needed to win for my club and my country, and if I felt that was under threat, I’d be a wreck.

‘I’d have thoughts like “well, when I retire, I won’t have to deal with these nerves”, which is f*****! Like, I’m wishing away my career because I can’t deal with my own performance anxiety…I owe my life to my pysch,’ she said of former Arsenal and England psychologist, Kate Green.

Speaking of how women’s football has been held back in the UK compared to the men’s game, she said: ‘no s***, because [the FA] stopped us playing [on Football League grounds] so we were 50 years behind.’ 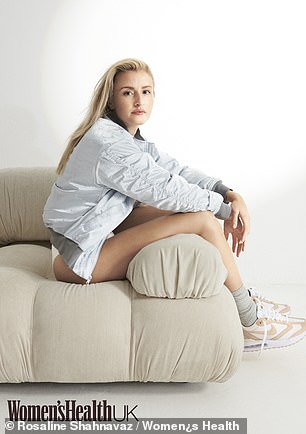 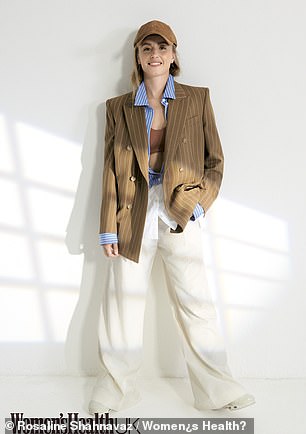 Leah, pictured, led the Lionesses to victory at this year’s Women’s Euros after England won 2 to 1 against Germany in a nail-biting final. But nearly six months on, she admitted she is scared she will chase the high of this win for the rest of her life. 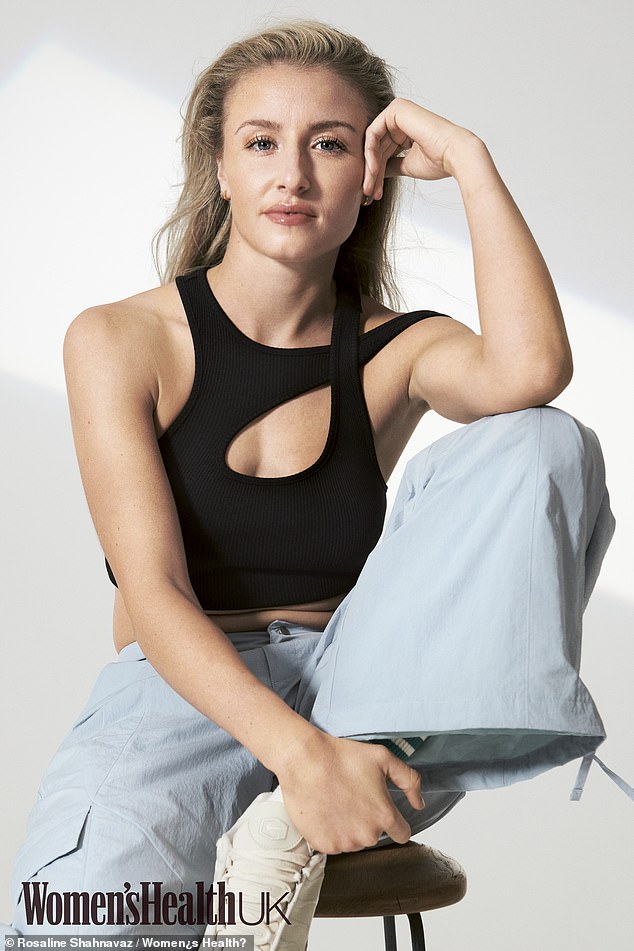 ‘There’s no f****** surprise that you have 60,000 people at games and we have three…I think that filters into the club. It’s been like, ‘the boys are in the gym so you can’t go in’…Two years on we’re moving to a new facility; things have all changed,’ she added.

Leah led the Lionesses to victory at this year’s Women’s Euros after England won 2 to 1 against Germany in a nail-biting final.

But nearly six months on, she admitted she is scared she will chase the high of this win for the rest of her life.

‘Hard. It scares the s*** out of me if I’m honest that every day for the rest of my life I will chase that feeling. I don’t see how it could have been topped,’ she said.

‘The only thing I’d love to do is go back and watch it from the stands. As the final whistle went, my grandma just put her head on my mum’s shoulder and went, “She did it”,’ she revealed.

What is endometriosis? How the disorder results in pelvic pain and internal scarring

Endometriosis is an often painful disorder in which tissue similar to the lining of the uterus — the endometrium — grows outside the uterus.

It most commonly affects the ovaries, fallopian tubes, and the tissue lining the pelvis.

The primary symptom of endometriosis is pelvic pain, although many women also experience cramping during their menstrual cycle.

Often misdiagnosed, many women only discover they have the condition during infertility treatment.

Approximately half of women diagnosed with endometriosis have difficulty getting pregnant.

While studies about the link between endometriosis and miscarriages are still ongoing, newer research suggests that the condition can leave sufferers at greater risk of having a miscarriage.

While she admitted she struggles with some aspect of celebrity, she said she ‘loves’ that she and the rest of the team can ‘reach so many people.’

‘Like, girls’ mums and dads don’t have to search us out like mine had to…I hate the fame and that side of it. I hate that to get from my car to you in the quickest time I need to put a cap on.

‘But when you become a professional women’s footballer, like, that is your role, it’s a joint responsibility.

‘If you’re not prepared to [be famous] you’re doing a disservice to the game and all those women that had to pretend to be boys to be able to play. I understand that I stand on the shoulders of those people,’ she said.

But the athlete added that fame has not changed the person she is.

‘For the past two years, I’ve only actually spent time with people I already knew…I’m not scared of making new friends, but I won’t be held accountable the same way that I would with my people,’ she added.

Looking to the future, the player admitted the thought of playing football for another 10 years is ‘quite a daunting thought.’

But she added that she has revised her timeline, saying: ‘I really held on to that stuff…I’ve taken all that off [the timeline]. Because if it happens, it happens. I’ve learnt to really trust my feelings and myself now.’

Read the full Leah Williamson interview in the Jan/Feb issue of Women’s Health UK, on sale now, also available as a digital edition.

What are the lyrics to Sweet Caroline? Everything you need to know about Neil Diamond’s classic that’s become a Three Lions supporters’ anthem

Women footballers are at increased risk of injury because they play in boots designed for MEN, research finds

England women’s captain Leah Williamson reveals the Lionesses now have ‘power’ to ask for what they want after ‘proving they deserve it’, as she oozes confidence on GQ cover