Ministers are planning tough new ‘red alert’ lockdowns, with a leaked document revealing that all social contact outside homes could be banned under the most extreme part of a proposed ‘traffic-light-style’ system, according to reports.

The new three-tier system includes an Alert Level Three which will include tough new restrictions – which almost parallel the complete lockdown measures imposed in March.

These include closing all hospitality and leisure business and banning contact with anyone outside a person’s household in any setting.

Non-professional sports will also be stopped – though places of worship will still be allowed to stay open – which was not the case during the original coronavirus lockdown in the UK.

The tough red measures, outlined in a leaked document seen by The Guardian, will only be imposed either nationally or in a specific area if the virus cannot be controlled by measures in Alert Level Two or if an area sees a ‘significant increase in transmission’.

Measures for ‘Alert Level Two’, amber in the traffic light system, include limiting social gatherings to people within a household and support bubble, while travel will be limited to essential purposes.

Alert Level Two will be triggered when there has been a rise in infections and local measures cannot control it.

Meanwhile Alert Level One, green, will include the measures that are already in place, such as the ‘rule of six’, the 10pm Covid curfew on hospitality businesses and the wearing of face masks in public places such as supermarkets and public transport.

According to the Guardian, A Whitehall source said the levels were intended to be ‘minimum standards’.

The source added that specific local circumstances in each area would also be taken into account.

The reports come as Boris Johnson today denied bungling coronavirus lockdowns as he warned there is no guarantee the situation will improve by Christmas.

The PM admitted people were ‘furious’ with him over the 10pm pubs curfew, the Rule of Six, and chaotic local curbs, but defended his handling of the crisis amid growing disquiet on his own benches.

As the virtual Tory conference gets underway, Mr Johnson urged the public to be ‘fearless but use common sense’ to help manage the outbreak without destroying the economy.

He said he was working ‘flat out’ and hoped that ‘in the course of the next few weeks and months the scientific equation will change’ and that would allow a ‘different approach’.

But in an interview on the BBC’s Andrew Marr show, he cautioned that the restrictions could drag into 2021.

‘But, you know, I’ve got to tell you in all candour, it’s going to continue to be bumpy through to Christmas, it may even be bumpy beyond. But this is the only way to do it.

He added: ‘This could be a very tough winter for all of us.’

In another rollercoaster day of coronavirus developments: 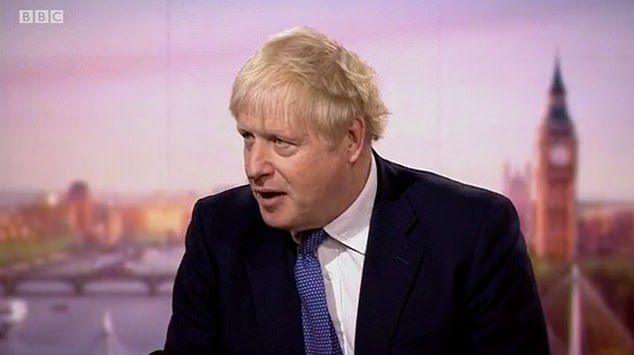 In an interview on the BBC’s Andrew Marr show, Boris Johnson cautioned: ‘it will continue to be bumpy through to Christmas. It may even be bumpy beyond.’ 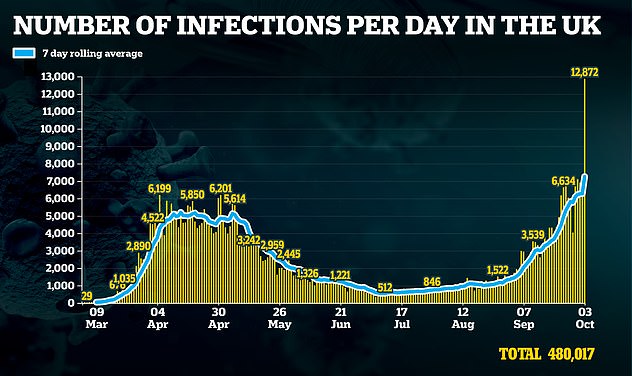 PM insists Trump is ‘going to be fine’

Boris Johnson insisted Donald Trump is ‘going to be fine’ today as he dismissed ‘balderdash’ rumours about his own coronavirus scare.

The PM said the President had been getting the ‘best possible care’ and he was ‘sure’ he will overcome the disease.

Speaking on the BBC’s Andrew Marr Show, Mr Johnson also batted away speculation that he has not fully recovered after having the disease in April.

He flatly denied suffering ‘long Covid’, joking that he was ‘fitter than several butchers’ dogs’.

And the premier bluntly blamed his own weight for having to go to hospital – although he stressed he was not making a point about Mr Trump’s condition. ‘I was too fat,’ Mr Johnson said.

The comments came after Mr Trump said he was feeling ‘much better’, despite conflicting reports over his condition.

The president’s medical team said he was doing ‘very well’ and was in ‘exceptionally good spirits’ in an update yesterday, less than 24 hours after he was taken by helicopter to the Walter Reed National Military Medical Centre near Washington DC.

However, White House chief of staff Mark Meadows briefed reporters soon afterwards that Mr Trump had gone through a ‘very concerning’ period on Friday and the next 48 hours would be critical.

The president himself then posted a video on Twitter from his hospital suite, saying he was feeling ‘much better now’ and hoped to ‘be back soon’.

The comments came after almost 13,000 new cases of Covid-19 were confirmed in the UK yesterday – double the number for the previous day.

However, the Department of Health blameD the spike on a technical problem, without saying exactly what the issue was.

Mr Johnson said: ‘The reason for that is because there was a failure in the counting system.’

He also suggested that it might have meant delays in some people getting crucial test results.

‘All the people who had a positive test result have now been notified,’ he said.

Mr Johnson acknowledged that people were ‘furious’ with him about the pandemic.

But he insisted his approach was ‘the only way to do it’, and it was not possible to do as some wish and let the disease ‘rip’ to protect the economy.

‘As Prime Minister I couldn’t take a course that could expose us to tens of thousands more deaths in very short order,’ he said.

‘And, you know, we’ve got to continue to bear down on this virus, whilst protecting the economy. That’s the balance we’ve got to strike.’

Told that Tories were condemning him for curtailing civil liberties without parliamentary scrutiny, Mr Johnson said ‘nobody in my position wants to do any of the things that we’ve had to do’.

‘I’m a freedom-loving Tory… I don’t want to have to impose measures like this, are you crazy?’ he said.

‘This is the last thing we want to do. But I also have to save life. And that’s our priority.

‘And I also think, by the way, that’s the priority of the British people and I think they will want to see their Government continue to work, continuing to fight the virus and that’s what we’re doing.’

Mr Johnson said it would have been wrong to display his usual ‘buoyancy’ during the pandemic.’

I think the reality is this is a Government that is facing an unprecedented crisis and I think if people wanted me to approach it with the sort of buoyancy and elan and the qualities I usually bring to things, I think people would think that was totally inappropriate,’ he said

On the controversial 10pm curfew for pubs across England, Mr Johnson blamed people who chose to ‘hobnob’ outside for the chaotic scenes in city centres at closing time.

‘Obviously it makes no sense if, having followed the guidance for all the time in the pub they then pour out into the street and hobnob in such a way as to spread the virus.’

He added: ‘The answer is for all of us to follow the guidance.’

Asked what scientific evidence there was for a 10pm cut-off he said: ‘One of the things that has been put to us is that by curtailing the hours you can reduce the transmission.’

‘On the other hand we have to keep our economy moving and our society going.

Boris Johnson today blamed a ‘failure in the counting system’ for coronavirus cases nearly doubling yesterday – as he hinted contact tracing might have been delayed.

The PM dodged giving a fuller explanation as he was grilled on the extraordinary spike reported yesterday, with just under 13,000 new cases.

Amid alarm at the increase, the Department of Health said there had been a ‘technical issue’ in adding a number of the cases to the total in England.

But appearing on the BBC’s Andrew Marr show this morning, Mr Johnson suggested that the issue might have gone deeper and affected crucial efforts to track down contacts of those who tested positive.

‘The reason for that is there was a failure in the testing system… It was a computing issue,’ he said.

The premier added that ‘all the people who had a positive test have now been notified’.

The government released its daily figures five hours late last night, showing a total of 12,872 new lab-confirmed Covid-19 cases across the UK reported in the 24 hours to 9am Saturday.

‘That is the balance that we are trying to strike and that’s why we have got the package of measures now that are in force both nationally and locally.

‘What we want people to do is behave fearlessly but with common sense, to follow the guidance – whether national or local – get the virus down but allow us as a country to continue with our priorities.’

He said he believed the science would ‘change’ in the coming months which would allow the Government and the country to alter its approach to dealing with Covid-19.

He said: ‘What I hope, and I believe very strongly, is that in the course of the next weeks and months, the scientific equation will change and we will start to see progress, whether it is on vaccines or on testing, that will enable us to take a different approach.

The Government said that, as of 9am on Saturday, there had been a further 12,872 lab-confirmed cases of coronavirus.

As of 9am on Friday, there had been a further 6,968 lab-confirmed cases in the UK.

The official dashboard said on Saturday that due to a technical issue, which has now been resolved, there was a delay in publishing a number of cases.

This means that the total reported over the coming days will include some additional cases from the period between September 24 and October 1.

Experts have previously warned that describing the daily figure as a record could be ‘misleading’ as it is not clear how many people were actually infected during the height of the first wave due to a lack of community testing at the time.

Saturday’s figure brings the total number of cases in the UK to 480,017.

The Government also said a further 49 people had died within 28 days of testing positive for Covid-19 as of Saturday. This brings the UK total to 42,317.

Separate figures published by the UK’s statistics agencies show there have now been nearly 57,900 deaths registered in the UK where Covid-19 was mentioned on the death certificate.

Other figures show there were 2,194 Covid-19 patients in hospital in England as of Saturday, up from 1,622 a week ago, while 307 Covid-19 hospital patients were in ventilation beds, up from 223 a week ago. 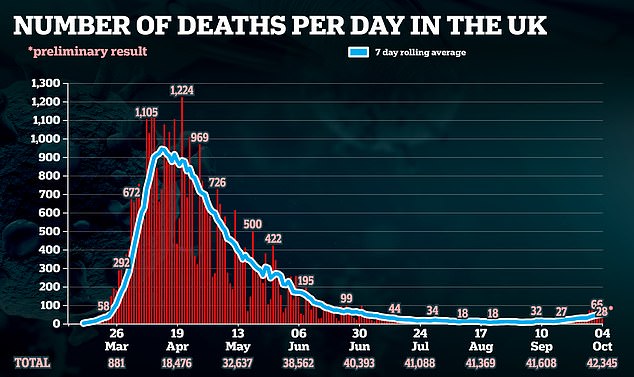 A further 28 people have died from coronavirus in Britain, preliminary figures show

A total of 368 patients with confirmed Covid-19 were admitted to hospitals in England on Thursday, compared with 288 a week earlier.

Cabinet minister Brandon Lewis was asked about a technical issue with reporting test data that saw more than 12,000 additional UK positive coronavirus cases declared by the Government on Saturday.

He told the Sophy Ridge programme: ‘This is an issue between September 24 and October 1.

‘Those numbers have been put in as of yesterday and as you say, has had that impact on the numbers.

‘I would say actually this is a testament to how focused the Department of Health, Public Health England, the Test and Trace are around the system.

‘We are being transparent about this, we’re publishing the figures daily.

‘As soon as they’ve spotted there was an issue, they’ve dug into that, they’ve got to the bottom of those numbers, they have been transparent and published the correct numbers and of course the teams will be looking through that to ensure it doesn’t happen again.

‘All the way through this we have been looking at how we can share information with the public as quickly as we can, as transparently as we can because that’s part of explaining to people just how dangerous and how quick this virus is in the way it spreads.’