A 20-year-old L-plate driver who injected himself with ice hours before running a red light at 110km/hr and slamming into a woman’s car, almost killing her, has been jailed for three years.

Kieron Thomas admitted that he thought he’d ‘killed the lady’ immediately after the collision, fleeing the crash and hiding in a garden as the woman lay in agony.

Sherridan Rizzoli was left with a brain injury, fractures to her lower back, a broken pelvis, two broken vertebrae, a large hernia and severed nerves in her right arm after the horrific collision on February 16 last year.

Thomas’ fears of jail were realised on Tuesday when he was sent to prison after pleading guilty to negligently causing serious injury to the 42-year-old Ballarat mother and hospital worker as he evaded police at high speed.

Thomas, driving an unregistered car, injected himself with ice between 2am and 3am before asking his 25-year-old friend ‘if he wanted to go for a spin’.

The pair sped through Ballarat about three or four hours later, running a red arrow, and driving 100km/h in a 60km/h zone, with police in pursuit.

Thomas struck Ms Rizzoli’s car at an intersection in suburban Ballarat after speeding through a red light at 110km/h, causing the woman’s vehicle to rotate into a power pole.

Thomas took his hands off the steering wheel and took no evasive action other than attempting to brake.

Thomas fled on foot and hid in a garden, thinking he ‘killed the lady in the car’.

Before fleeing, he checked on his injured passenger – who had momentarily blacked out – before leaving him behind.

‘You were an inexperienced driver and you knew it,’ Judge Pullen said.

‘To run and to part was very callous and cowardly behaviour by you.’ 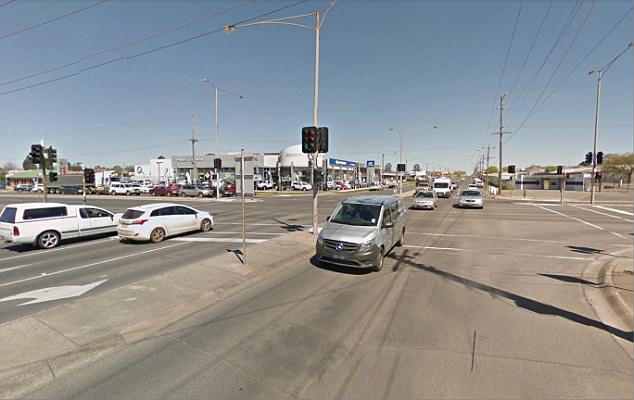 She said although she accepted Thomas was now remorseful, the crash had changed Ms Rizzoli’s life forever.

‘You said you took off because you didn’t want to get caught and go to jail.

‘You said you were stuck in the ‘little mental space’ of just getting out of there.’

He was also fined for a number of summary offences that occurred a month before the crash, including driving while exceeding the prescribed concentration of drugs, two counts of stating a false name, being a learner driver without an experienced driver in the car, using an unregistered car and driving without his L-plates.

He will be eligible for parole in 20 months and has already served 131 days.