Leaving the EU could restore faith in democracy, says Mark Carney: Bank of England governor backtracks on Brexit but warns of economic shock of No Deal

Brexit could restore faith in free trade and democracy if the UK leaves with a deal, the Bank of England Governor has said.

In a statement sharply at odds with his previous warnings that Brexit would spark chaos, Mark Carney said a managed departure from the EU would show voters that they matter and encourage them to trust the parliamentary system again.

But he also warned that a No Deal Brexit would spark an economic shock – something which he says the whole world should be trying to avoid.

Brexit could restore faith in free trade and democracy if the UK leaves with a deal, the Bank of England Governor, Mark Carney has said

The Governor said millions of workers feel let down and left behind by globalisation – and the only solution is to give power back to the people.

He added that a Brexit deal may be a step towards a world where families are comfortable with free trade because they feel in control.

The Governor said: ‘In many respects, Brexit is the first test of a new global order and could prove the acid test of whether a way can be found to broaden the benefits of openness while enhancing democratic accountability.’

He said Brexit could lead to new ‘international cooperation’, allowing for better cross-border trade deals and a more effective balance of ‘local and supranational authority’.

Mr Carney’s backing for Brexit if a deal is struck marks a major change of tone.

He has long been accused by Eurosceptics of opposing our departure from the EU and whipping up Project Fear.

And in the run-up to the referendum, he was attacked for politicising the Bank of England when he claimed Brexit could trigger a recession.

The European Commission broke its own rules when a close ally of Jean-Claude Juncker was given a top job, a Brussels watchdog has found.

Mr Selmayr was promoted twice in ten minutes in a closed-door meeting in February last year.

In her report yesterday, the Ombudsman said she found several ‘instances of maladministration’ in the handling of the appointment.

She said the vacancy of Commission Secretary General should be advertised to external candidates.

The Commission dismissed the report last night, saying: ‘We have a different reading of the applicable rules.’ A spokesman added: ‘The person currently occupying this post fully meets all the demanding requirements for the job.’

Last year, Mr Carney claimed the vote to leave had cost households £900 each by damaging economic growth – and he has always been one of the loudest critics of No Deal.

The Bank also claimed No Deal could tip Britain into its worst recession for a century, knocking a third off house prices and triggering a dramatic surge in unemployment.

Mr Carney yesterday warned again that a deal is needed to avoid chaos – although he sounded more upbeat about the future following an orderly exit from the EU than he has done previously.

The Governor said that Britain’s departure from the European Union comes at a time of growing risks for the global economy. He also said that No Deal would be ‘a shock for this economy’, and said that UK investment has not grown since the referendum was called – having ‘dramatically underperformed both history and peers’.

Mr Carney used his speech – given to senior business figures at London’s Barbican – to warn them that China is increasingly risky and businesses around the world are taking on worrying levels of debt.

He said: ‘China is the one major economy in which all major financial imbalances have materially worsened. While China’s economic miracle over the past three decades has been extraordinary, its post-crisis performance has relied increasingly on one of the largest and longest running credit booms ever.’

A 3 per cent drop in the Chinese economy would shave 0.5 per cent off the UK, he warned. 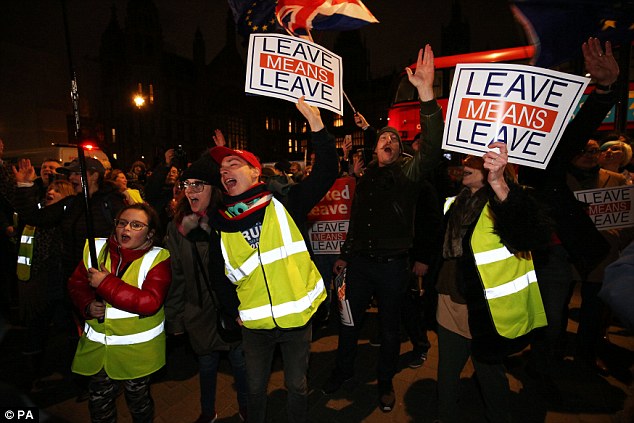 Last year, Mr Carney claimed the vote to leave had cost households £900 each by damaging economic growth – and he has always been one of the loudest critics of No Deal. Pictured Brexit protesters

On corporate debt, he said a surge in high-risk business lending has worrying echoes of the US boom in unsustainable loans which led to their financial crisis in 2008.

Firms which are less likely to pay money back are increasingly being lent large amounts, although the banking system is thought to be much less exposed to a downturn now than it was in 2008.

Mr Carney also took a swipe at Donald Trump, who has cracked down on imports from China. The US President once tweeted: ‘Trade wars are good and easy to win.’

But speaking yesterday, Mr Carney batted away Mr Trump’s casual brag, saying: ‘Contrary to what you might have heard, it isn’t easy to win a trade war.’

Businesses ‘being hung out to dry’

A leading business group has warned that British companies are being ‘hung out to dry’ because they cannot prepare for Brexit day and beyond.

The British Chambers of Commerce (BCC) published 20 ‘critical’ questions it said remained unanswered if the UK leaves the EU without a deal. They include what trade agreements will be in place, how firms can move skilled staff between the UK and EU, and which regulations will have to be followed. Adam Marshall, director general of the BCC, said: ‘There is a very real risk that a lack of clear, actionable information from Government will leave firms, their people and their communities hung out to dry. Businesses need answers they can base decisions on. The lack of clear, precise answers is causing real damage to many businesses.’

A Government spokesman said: ‘We are focused on securing changes to ensure the deal passes through Parliament.’