‘The interrogations will begin with former public works minister Ghazi al-Aridi,’ the official said, speaking on condition of anonymity.

‘If a shortcoming or negligence on the part of one of the questioned ministers is found, the judiciary will have to state that it does not have jurisdiction to sue them,’ the official explained.

The chief prosecutor will then have to transfer their file and connected evidence to parliament because the jurisdiction lies with a special council in charge of suing ministers and presidents.

The official said the current minister of public works, now working in a caretaker capacity because the government has resigned over the August 4 explosion, would also be questioned in coming days.

Several other former public works ministers, current and former ministers of finance and justice, will also be brought in, he said.

The explosion, Lebanon’s worst peacetime disaster, caused devastation across Beirut and is widely seen as a direct consequence of state incompetence and corruption.

Prime Minister Hassan Diab’s government resigned on Monday but that did little to appease protesters who want heads to roll over the disaster.

Documents seen by AFP reveal that relevant officials at every echelon of the state were aware of the danger posed by the large pile of ammonium nitrate stored for years in a port warehouse until it blew up. 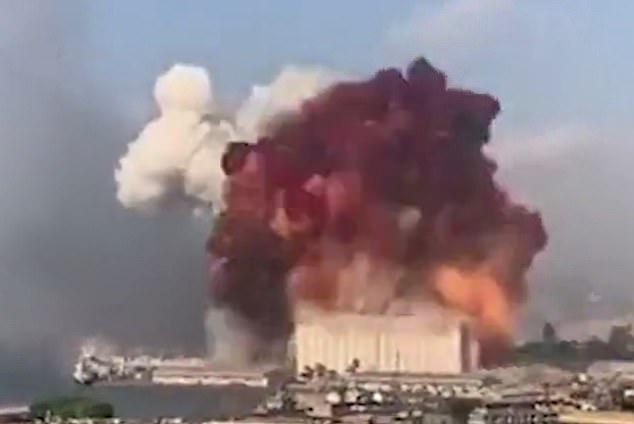 The devastating explosion last week. An Italian expert has claimed that the brick red cloud suggests that the blast was not caused by ammonium nitrate and suggested burning armaments had instead caused the blast 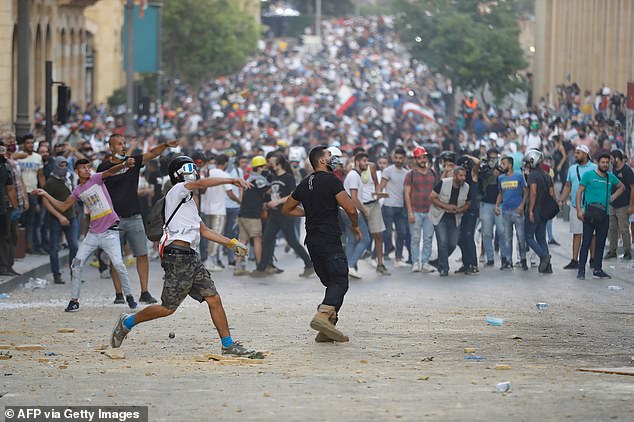 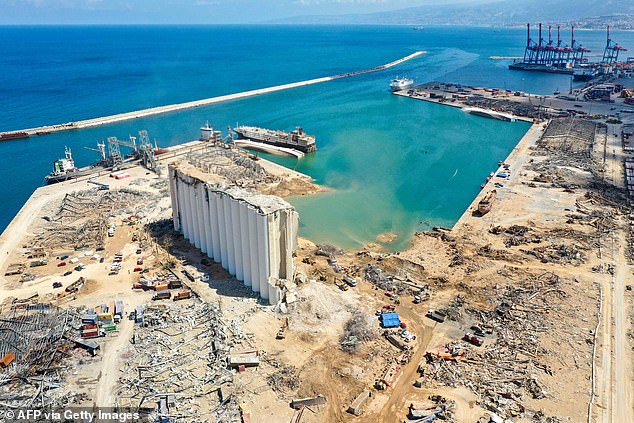 An explosives expert has claimed the Beirut blast was caused by burning military missiles – not ammonium nitrate.

Danilo Coppe, 56 and from Parmesan in Italy, is one of the country’s leading explosive experts.

He believes the August 4 blast, which killed 160 people, wounded 6,000 and destroyed 300,000 homes, was not caused by ammonium nitrate because the colour of the cloud was orange.

‘There should have been a catalyst, because otherwise it wouldn’t all have exploded together.

‘You can clearly see a brick orange column tending to bright red, typical of lithium participation. Which in the form of lithium-metal is the propellant for military missiles. I think there were armaments there,’ he said.

Hassan Diab blamed a ‘corrupt’ political class that has ruled Lebanon for more than 30 years for the August 4 explosion, sparked when a warehouse fire ignited 2,750 tons of highly explosive ammonium nitrate that had been stored in the city’s port for six years.

The Prime Minister told the nation in a televised address on Monday: ‘Today we are heeding the people and their demands to hold accountable those responsible for a disaster.’

Diab praised his government – assembled after previous Prime Minister Saad Hariri stepped down amid protests over corruption – for fighting ‘valiantly and with dignity’ to reform the country.

But he said that ‘I have discovered an apparatus of corruption that is greater than the state,’ heaping pressure on Hezbollah-backed President Michel Aoun who will now lead a search for his replacement.

‘Between us and change is big powerful barrier,’ Diab added as a parting shot.

Several ministers had earlier quit the cabinet amid fury over the blast and the Hezbollah-backed President Michel Aoun – who has rejected calls for an international probe into the disaster – is also facing calls to quit.

The resignations do not force Aoun to step down but they will cause a legislative paralysis in Lebanon’s French-inspired system.

Many in Lebanon see the blast as a symbol of corruption and incompetence among the country’s elite, and protests have broken out with tear gas fired on protesters after months of political and economic meltdown.

Much of the fury is directed at the political elite which is backed by Hezbollah, in turn backed by Iran which has called for outside countries to refrain from ‘politicising’ the disaster.

The explosion, which drew comparisons with the Hiroshima atom bomb 75 years ago, has also injured more than 6,000 people and left 300,000 homeless. 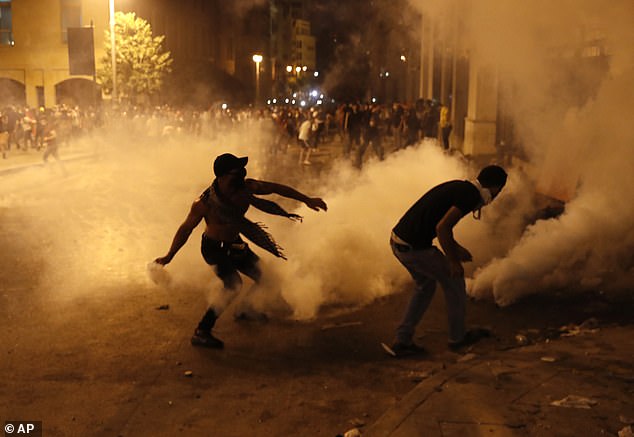 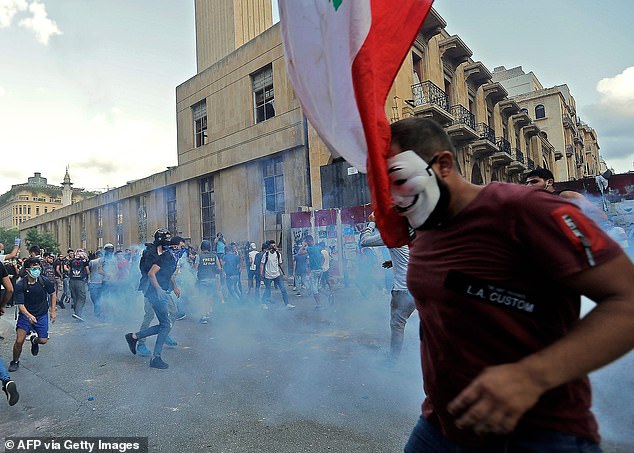 Lebanese protesters run from tear gas fired by security forces today in Beirut today. Many see the blast as a symbol of corruption and incompetence among the country’s elite, and protests have broken out after months of political and economic meltdown.

The disaster also sparked widespread panic over wheat shortages after 15,000 tonnes of grains were blasted out of the silos.

The cabinet decided to refer the investigation of the blast to the judicial council, the highest legal authority whose rulings cannot be appealed.

Lebanon’s president had previously said explosive material was stored unsafely for years at the port.

He said an investigation would consider whether the cause was external interference as well as negligence or an accident.

‘There are two possible scenarios for what happened: it was either negligence or foreign interference through a missile or bomb,’ he said last Friday.

The captain of the Rhosus claims he was told to stop in Beirut to pick up extra cargo – while Mozambique has denied all knowledge of the shipment.

Cypriot police said on Thursday that they had questioned Russian businessman Igor Grechushkin over his alleged links the ship and its cargo.

Beirut’s governor said many foreign workers and truck drivers remained missing and were assumed to be among the casualties. 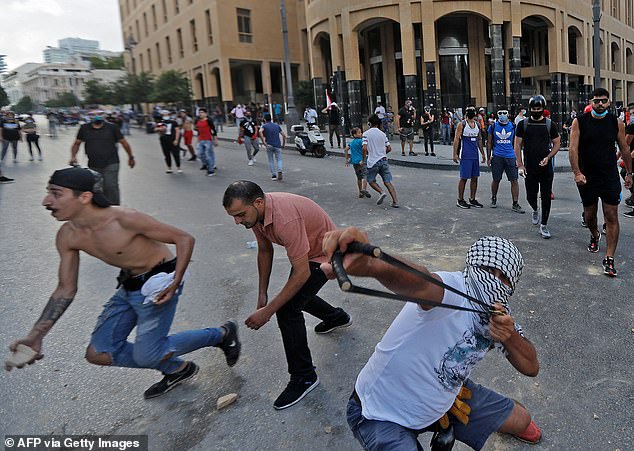 A Lebanese protester uses a slingshot to hurl stones at security forces amid clashes in the vicinity of the parliament in central Beirut on August 10, 2020, following the deadly Beirut port explosion 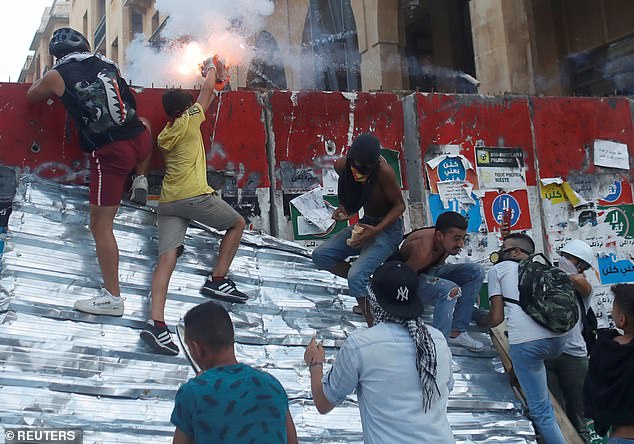 A demonstrator fires firecrackers during a protest in Beirut, Lebanon, August 10, 2020 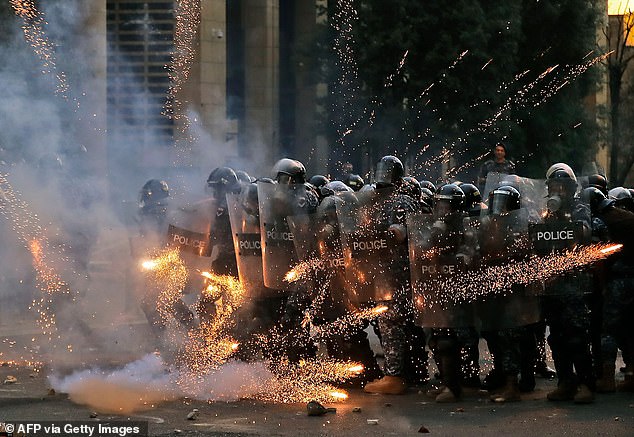 Firecrackers thrown by protesters explode in front of riot police amid clashes in the vicinity of the parliament in central Beirut on August 10, 2020

Anti-government protests in the past two days have been the biggest since October, when demonstrators took to the streets over the country’s economic crisis.

Diab’s cabinet, which was formed in January with the backing of the powerful Iran-backed Hezbollah, met on Monday with many ministers wanting to resign.

The information and environment ministers quit on Sunday as well as several lawmakers, and the justice minister followed them out on Monday.

Finance minister Ghazi Wazni, a key negotiator with the IMF over a rescue plan, is believed to have gone to the cabinet meeting with a resignation letter.

At least nine lawmakers have also announced they would quit in protest, as have two senior members of the Beirut local government.

Lebanon’s system is modelled on that of former colonial power France, where the president appoints the prime minister and is not required to resign along with the cabinet. 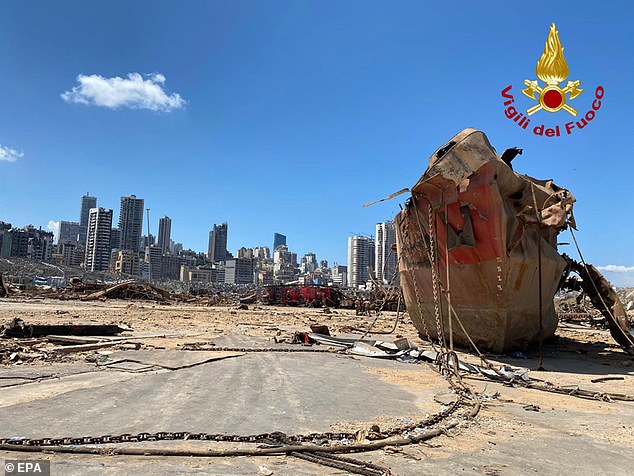 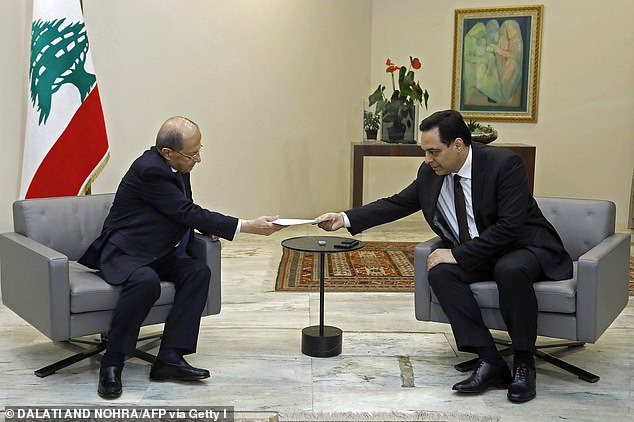 A handout picture provided by the Lebanese photo agency Dalati and Nohra on August 10, 2020 shows Prime Minister Hassan Diab (R) submitting his resignation to President Michel Aoun at the presidential palace in Baabda, east of the capital Beirut

However, Aoun is also under pressure to quit and his portrait was burned by demonstrators who burst into the foreign ministry building during angry protests at the weekend.

The country’s sectarian power-sharing system requires the president to be a Maronite Christian, the prime minister to be a Sunni and the parliament speaker to be a Shi’ite.

Prime minister Diab, 61, had said on Saturday that he would request early parliamentary elections.

‘The entire regime needs to change. It will make no difference if there is a new government,’ said Joe Haddad, a Beirut engineer. ‘We need quick elections.’

Last Tuesday’s blast is thought to have been caused by a stockpile of ammonium nitrate which had been left unsecured at the port since 2013.

Six days after the enormous chemical blast which was felt as far away as the island of Cyprus, residents and volunteers were still clearing the debris off the streets.

International rescue teams with sniffer dogs and specialised equipment remained at work at ‘ground zero’ today, where the search is now for bodies and not survivors.