As a young engineer, Stephen Lamonby was taken under the wing of an elderly colleague and given a piece of wisdom he has never forgotten – ‘Knowledge not passed on is knowledge wasted.’ Over the next half century, Mr Lamonby, now 73, designed Navy torpedoes, satellite-carrying rockets, oil rigs and special effects for Hollywood blockbusters including Saving Private Ryan and Gladiator.

Generous with his time, he was true to his mentor’s maxim, and when semi-retirement loomed he became a part-time lecturer in special effects and mechanical engineering at Solent University in Southampton.

Before his arrival, students were apt to complain that the course was on the dry side, too dominated by theory. But to their delight, Mr Lamonby, drawing on rich experience, enlivened lectures with practical demonstrations on how to build such things as wind generators and prosthetic heads.

If pressed, he might tell them a little of his Hollywood past – how, for example, he constructed a fake Russian tank that Pierce Brosnan drove through the streets of St Petersburg in the James Bond film GoldenEye.

He says he enjoyed a ‘fantastic relationship’ with his students. But these are changing times. The pensioner was navigating an unfamiliar world of safe spaces, trigger warnings, identity politics and sensitivity to such concepts as cultural appropriation and forbidden pronouns – a world in which gossamer-skinned undergraduates often require protection from opposing views.

Stephen Lamonby was sacked for gross misconduct for remarking during a private conversation with his course leader, Dr Janet Bonar, that Jewish people are among the cleverest in the world

Perhaps it was only a matter of time before Mr Lamonby fell foul of the strange rules, though few could have foreseen how his teaching career would end.

He was sacked for gross misconduct for remarking during a private conversation with his course leader, Dr Janet Bonar, that Jewish people are among the cleverest in the world. He had enthused about his heroes from the world of physics, all Jewish. Albert Einstein and American theoretical physicists Robert Oppenheimer and Richard Feynman. Then he casually asked Dr Bonar, a physicist herself: ‘Are you Jewish?’

At this, the American academic accused him of racism and stormed out of their meeting.

Mr Lamonby had also observed that Germans, Americans and Japanese are good engineers and acknowledged: ‘I have a soft spot for young black males. I do think that they are underprivileged and many [are] without fathers etc. Need all the help they can get.’

These remarks would also be used against him. After an ‘investigation’ by the university authorities, it was decided that he ‘created an offensive environment for Dr Bonar’ and his views posed ‘a risk to the university community and student and staff experience’.

While he claimed during a subsequent hearing that parts of the conversation with Dr Bonar were taken out of context, he concedes that some of his observations were clumsily expressed. He was willing to apologise and accept a letter of warning. But this option, he says, was never explored.

‘By sacking me, the university has ensured that I will never be able to teach anywhere again,’ says Mr Lamonby in an interview with The Mail on Sunday. ‘It was all very spiteful. I still wake in the night, angry at the outrageous injustice of it all. How has it come to this? It’s unbelievable.’ 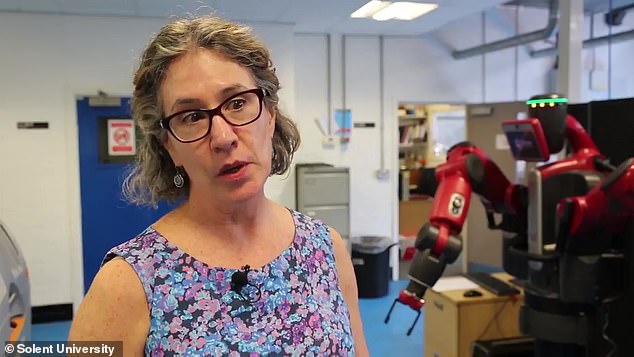 While he claimed during a subsequent hearing that parts of the conversation with Dr Bonar (pictured) were taken out of context, he concedes that some of his observations were clumsily expressed

Last week, an employment tribunal, held in Bristol, concluded that the university had a duty to its ‘multicultural, predominantly young student body’ to protect them from ‘potential acts of racism’ and dismissed his claims of unfair dismissal and breach of contract. At one point during the proceedings, Mr Lamonby claims that the tribunal judge suggested the engineer was part of the Brexit generation, ‘implying I was anachronistic. I didn’t stand a chance’. Ironically, Mr Lamonby says he is non-political and did not even vote in the 2016 Brexit referendum.

Some who read reports of his case might imagine a blimpish figure, out of step with modern times, yet in conversation he is gracious, modest and dumbfounded that, as he puts it, ‘the whole thing has come to this’.

By ‘this’ he means sacked, his good name shredded, his humiliation laid bare across newspapers and on television.

What he didn’t expect, though, were hundreds of supportive emails, with some of the most sympathetic coming from undergraduates, the very people he was sacked to ‘protect’.

Just before our interview, Mr Lamonby took a call from a Chinese student asking him for a reference. Perhaps, he mused, they aren’t such a hyper-sensitive bunch after all.

In contrast to other lecturers, cosseted by academia, Mr Lamonby had years of industry experience, his career taking him to Africa, the Middle East, Europe, Russia and the United States. He developed an easy rapport with his students.

‘I have a system of teaching in which I move around to each student as they are working and give them all at least ten minutes of coaching and encouragement. It worked very well. I didn’t want to be the lecturer rooted at the front of the classroom,’ he says.

Dr Bonar was receptive to his suggestions on how to improve the course and the pair held regular meetings, with Mr Lamonby giving up his time and expertise for free.

One such meeting took place on March 28 last year in the university canteen, The Dock.

Mr Lamonby noted that some of the overseas students were struggling to grasp even the most basic elements of engineering and said that he stayed behind to help three of them.

‘She said I shouldn’t have done this,’ he recalls. ‘I said I had a soft spot for young black men because they are often from environmentally disadvantaged societies.

‘She disagreed. She said they are the same as everyone else, which is the line of the university, that everyone is equal and that no one is disadvantaged.

‘I have helped people in all sorts of disadvantaged countries. I know that sometimes they need helping.’

The conversation remained ‘relaxed’, with Mr Lamonby characterising it as at times resembling an ‘intellectual argument’.

He adds: ‘We then started talking about physics and her background in the subject for which she is highly qualified. I explained I had an interest in astrophysics since I was a schoolboy and in the world I grew up in, Einstein was always said to be the cleverest man in the world.

‘I spoke of the Manhattan Project [the mission to develop the world’s first atomic bomb] and expressed admiration for the physicists involved, who all happened to be Jewish, and I pondered whether they were predisposed to be good at physics because of the way their minds work.

‘Nothing has come close to what these people achieved – to me they are superheroes.

‘I said to Dr Bonar, “You’re an American physicist, are you Jewish?”, and then she jumped up screaming and shouting. It was an off-the-cuff remark, an involuntary comment. To me it was like saying, “My father plays the bagpipes every Burns Night and someone asking, “Is he Scottish?” It was not meant to be hurtful in any way.

‘But that’s what she objected to. She jumped up and said that’s a racist statement and made a fuss and stormed out. So I drove home in high dudgeon.’

Once home, still seething, he sent an email to Dr Bonar saying that he was ‘not used to being smacked down like a schoolboy’ and called a racist. 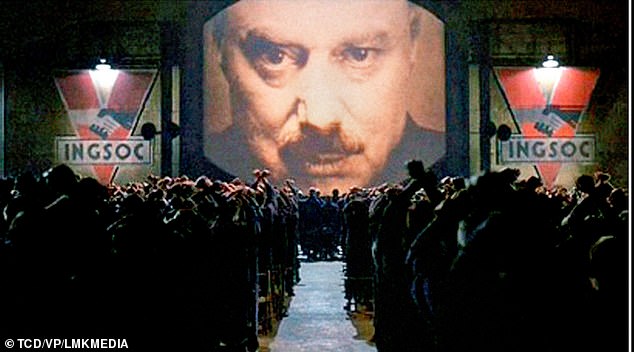 He didn’t notice an email Dr Bonar had already sent to him immediately following the meeting. It began ‘Hi Stephen. Thanks for your time earlier today’ and went on to discuss elements of the course, asking him for further feedback and saying: ‘Look forward to meeting you again to discuss this unit on Thursday April 4.’

Of their argument, she says only that at their next meeting ‘we will do more planning of engineering teaching’ rather than ‘discuss our wildly different views of race and national characteristics’.

It was only after receiving Mr Lamonby’s 3.45pm email that Dr Bonar made a complaint to her boss, saying that ‘on reflection I do feel concerned about our students being taught by someone with his entrenched racist views.

‘I accept I cannot change the way he thinks, which is totalitarianism, but I can be professionally concerned about the way he acts towards our students.’

She says that he ‘asked if I was Jewish because I was good at maths’, adding that his views were ‘abhorrent to me’. And she also claims that Mr Lamonby ‘felt sorry for black students as they didn’t have the heritage in their DNA to be able to do engineering’.

This, insists Mr Lamonby, was untrue. ‘I never said this – it was wrong and unfair to claim this.’

And of her claims about totalitarianism and that he held ‘entrenched’ racist views, he says: ‘Where did she get all that from? It’s crazy.

‘She knew that this would result in disciplinary action that would not only get me sacked but would stop me getting a job in any university again.’

The following week, Mr Lamonby, unaware at this point that a complaint had been made, was in a lecture when three women from the university’s human resources department entered the room and, in front of his students, insisted he immediately accompany them to a meeting with the dean. He never taught again.

And so followed a series of endless meetings and hearings from which Dr Bonar was always absent. Mr Lamonby had hoped to be able sit around a table and clear the air ‘as we would in business’, but it proved a forlorn hope.

He was never able to question her, despite repeated requests. At one hearing, six governors were ranged before him and one, a woman, enquired: ‘Have the police been called?’

Mr Lamonby says: ‘It was ridiculous. They were wasting an enormous amount of time and energy on a storm in a teacup. I gazed out of the window into the courtyard and reflected that if this was 300 years ago, they’d build a bonfire and stick me on it as a heretic.

‘Until this point there had been no complaints about me in six years, only praise. As things developed, the university seemed to be creating a case against me, pointing out that I was using forbidden pronouns such as “they” to describe a nationality. It was all so petty.’

Mr Lamonby reflects that his generation went to university to spread their wings and push boundaries. But nowadays he fears there are too many rules to protect students – and lecturers, as his experience demonstrates – from perceived offence.

‘It’s very anti-intellectual, this idea that different views must be stifled. I believe that freedom of speech has limitations, but what is happening in our colleges and universities is very sad.

‘I simply wanted to help, to pass on my knowledge in the way that great man – who helped design the Second World War Wellington bomber, incidentally – did for me when I was starting out.

‘To be called a racist after the life I’ve led is deeply wounding. I’ve been all over the world, experienced all sorts of cultures. It opens your eyes, gives you a greater understanding of human nature.

‘One thing I have noticed is that people are the same wherever you go. They might be a different colour because of the density of the sunlight but they’re all the same – same needs and hopes and aspirations. To me there is only one race and that’s the human race and we’re all members of it.’

Solent University said: ‘We are pleased with the outcome of this hearing and its reflection of Solent’s commitment to our university values and to promoting equality, diversity and inclusivity for everyone who works and studies with us.’