House Intelligence Committee Chairman Adam Schiff is treating the American public like ‘idiots’ by relying on circumstantial evidence and gossip as evidence in Trump’s impeachment hearing, according to Rep. Lee Zeldin.

The stunning accusation was made by Zeldin on Fox’s ‘America’s News Headquarters’ on Sunday, in which he claimed Schiff and other leading Democrats have been pushing for impeachment event since Trump took office in 2016.

‘Adam Schiff really does thing that many Americans are idiots,’ Zeldin blasted. ‘If you remember March 22nd, 2017, he goes on another network, and he says that he has more than circumstantial evidence that President Trump colluded with the Russians.’

Zeldin continued that Schiff has failed to produce the purported ‘evidence’ ever since, adding that even former Special Counsel Robert Mueller was unable to substantiate such claims in his during his extensive investigation into Russian collusion and the Trump administration.

Speaking of Trump’s now infamous July 25 call with Ukrainian President Volodymyr Zelensky – which is central to the impeachment inquiry – Zeldin accused Schiff of making up ‘what he called a parody version of the call transcript, but he only said that after he got called out.’ 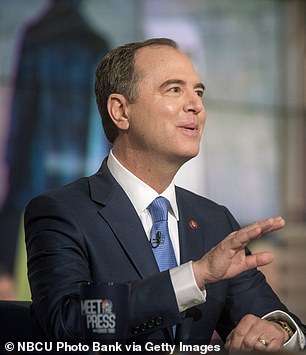 House Intelligence Committee Chairman Adam Schiff (right) is treating the American public like ‘idiots’ by relying on circumstantial evidence and gossip as evidence in Trump’s impeachment hearing, according to Rep. Lee Zeldin (left) 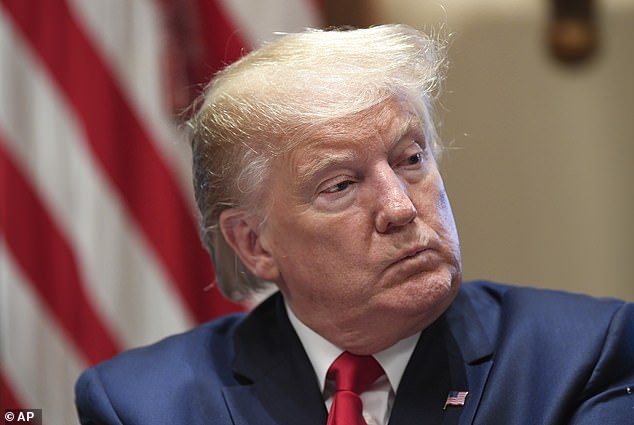 The stunning accusation was made by Zeldin on America’s News Headquarters on Sunday, in which he claimed Schiff and other leading Democrats have been pushing for impeachment event since Trump took officie in 2016

Speaking in September, Schiff sought to clarify that his paraphrasing of the call, saying: ‘Of course, the president never said, “If you don’t understand me, I’m going to say it seven more times.” My point is, that’s the message that the Ukraine president was receiving in not so many words.’

Schiff was also lambasted by Zeldin Sunday for his failure to report his congressional team met with the whistleblower in private – a meeting which went on to spark the impeachment inquiry.

‘It turns out that [Schiff’s] team was in contact with the whistleblower before this person had even filed the whistleblower complaint or had even hired an attorney,’ he said, adding that he believed the facts of the case still remain in Trump’s favour.

‘He’s made claims during his opening statements and his closing statements — trying to write the world’s greatest parody… trying to connect dots that aren’t actually connected,’ Zeldin continued.

‘He’ll say something’s a firsthand truth that shouldn’t be doubted and then you dig deeper and you realize it’s actually Ambassador [William] Taylor telling us that, Tim Morrison told him that [Amb. Gordon] Sondland told Morrison — the president told Sondland, give me a break…’

Zeldin also added Congress should be passing the North American Free Trade Agreement (NAFTA) US-Mexico-Canada Agreement, but instead, Schiff is more occupied ‘trying to pay off the people who put the gavel in his hand.’

Speaking on CNN’s ‘State of the Union’ earlier Sunday, Schiff spoke out about the Democrats’ impeachment push, admitting that despite an ‘ironclad’ case against the president, he can’t say whether his party will proceed to impeach Trump or not. 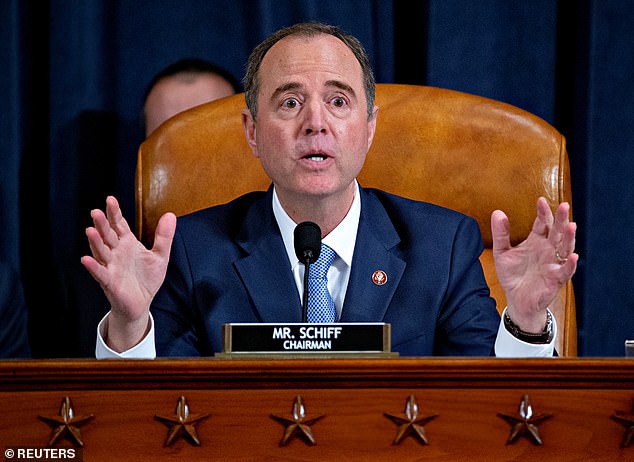 Schiff was also lambasted by Zeldin for his failure to report his congressional team met with the whistleblower in private, a meeting which went on to spark the impeachment inquiry

Host Jake Tapper asked: ‘If the facts aren’t contested and your committee is writing up the report and you don’t, at least as of now, have any scheduled witnesses or depositions — do you think President Trump should be impeached?’

Schiff coyly responded by saying that he wanted to ‘discuss this with my constituents and colleagues before I make my final judgement on it.’

‘But there are a couple of really important things we need to think about,’ he added.

Schiff also said that his committee continues to conduct investigative work, but he won´t let the Trump administration stall the inquiry.

Schiff’s staff and others are compiling the panel’s findings to submit to the House Judiciary Committee, which is expected to open its own hearings to consider articles of impeachment and a formal recommendation of charges.

He said his committee may need to file addendums to its report so that the Judiciary Committee can move ahead.

Democrats argue that the president leveraged his office for personal political gain. Trump had $391 million in congressionally approved U.S. assistance withheld from Ukraine from July to September and pushed Ukraine to launch investigations into political rivals.

But Republicans contend that the allegation he sought to bribe Ukraine is unsupported by firsthand testimony.

The ranking Republican on the House Intelligence Committee, Rep. Devin Nunes, said on Fox News ‘Sunday Morning Futures’ that public hearings over the past two weeks have drawn in many Americans who don’t normally follow cable news.

He said the hearings showed House Republicans are serious legislators and were ‘nothing but a total disaster’ for Democrats.

‘It’s probably the first time that they actually realized this whole Russia thing was a hoax and the Ukraine thing is a hoax,’ Nunes contended. 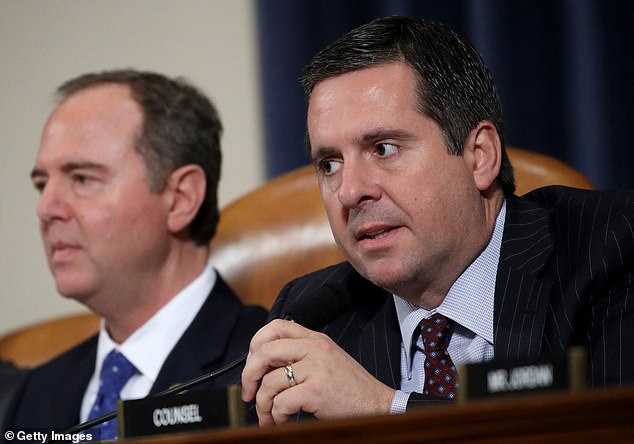 The ranking Republican on the House Intelligence Committee, Rep. Devin Nunes (right), said on Fox News ‘Sunday Morning Futures’ that public hearings over the past two weeks have drawn in many Americans who don’t normally follow cable news

Congressional Republican support for Trump is showing no overt signs of buckling. Schiff said that if no Republicans ended up voting to support impeachment, he believes it would mean a failure of the GOP to put the country over their party. He contended that if President Barack Obama had acted like Trump on Ukraine, Republicans ‘would have voted to impeach him in a heartbeat with a fraction of the evidence.’

‘If this had been a Democratic president, I would be among those leading the way and saying, we need to seriously consider impeaching this president,’ Schiff asserted.

Polling has shown that while public opinion has shifted recently toward slightly backing Trump’s impeachment, Democrats strongly support the effort while Republicans vehemently oppose it. Independents have been divided.

If the Democratic-led House did vote to impeach Trump, the case would then move to the Senate where a trial would likely take place in early 2020.

Sen. John Kennedy, R-La., said on ‘Fox News Sunday’ that he expects the House to vote to impeach.

‘When it comes to the Senate, I do not think the allegations will be summarily dismissed,’ Kennedy said.

He said he is in favor of letting all sides ‘offer whatever in terms of evidence and bring whatever witnesses they want.’

‘I don’t mind sitting there as long as it takes,’ Kennedy said.