Leeds United supporters have left the city strewn with litter after a wild promotion street party left a female police officer with serious head injuries when she was pelted with beer bottles.

Council workers were out in force as they used shovels to sift through piles of empty cans and bottles which left bins overflowing this morning.

Millennium Square was smothered by a layer of rubbish and broken glass, which forced early morning commuters to carry their bikes across the roads.

As many as 7,000 supporters had packed into the area last night, leaving little room for social distancing as they celebrated promotion to the top flight in English football for the first time in 16 years.

West Yorkshire Police arrested nine fans as they got rowdy, blaring out songs and letting off flares following a 3-1 win over Derby County.

The crowd gathered just a short walk from Leeds General Infirmary, where NHS staff have been battling the coronavirus pandemic for months.

One supporter had to be rushed to the hospital after he fell from a lamppost and broke his leg amid the celebrations and a female police officer was being treated in hospital after suffering a serious head injury. 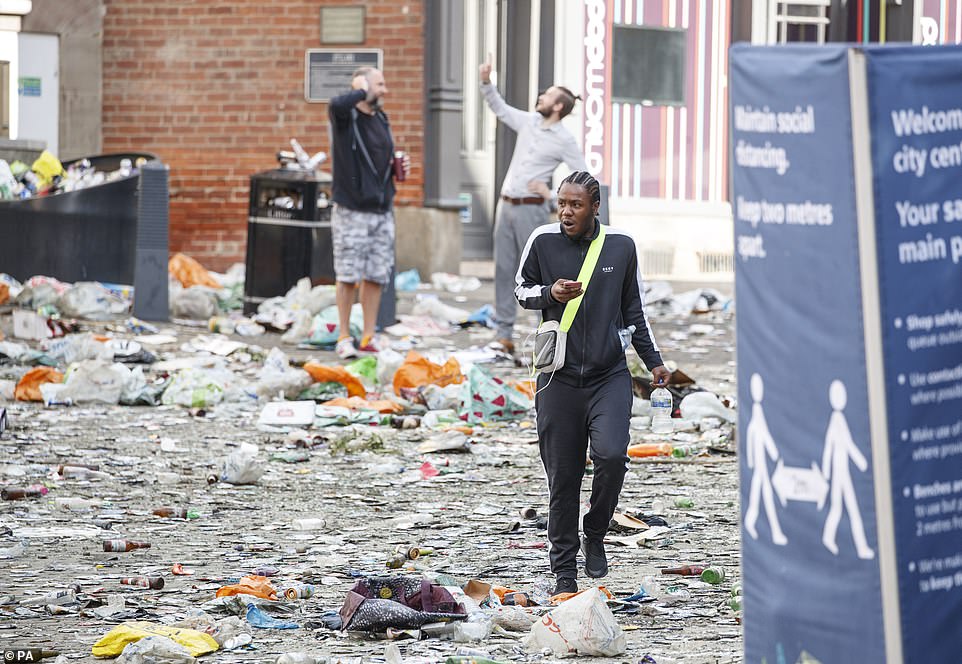 Millennium Square was smothered by a layer of rubbish and broken glass, with people up this morning having to tread carefully 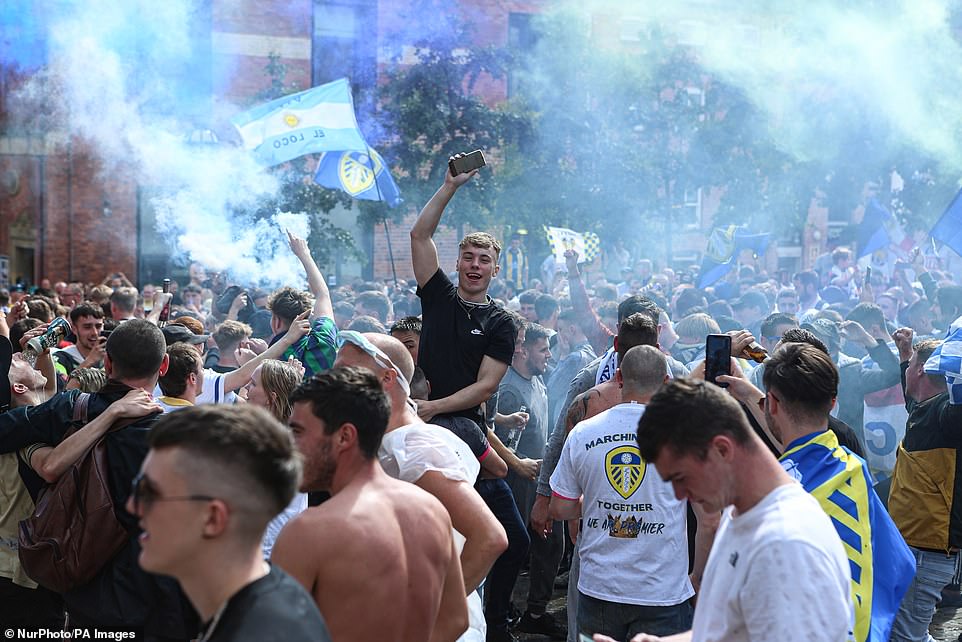 As many as 7,000 supporters had packed into the area last night, leaving little room for social distancing as they celebrated promotion to the top flight in English football for the first time in 16 years 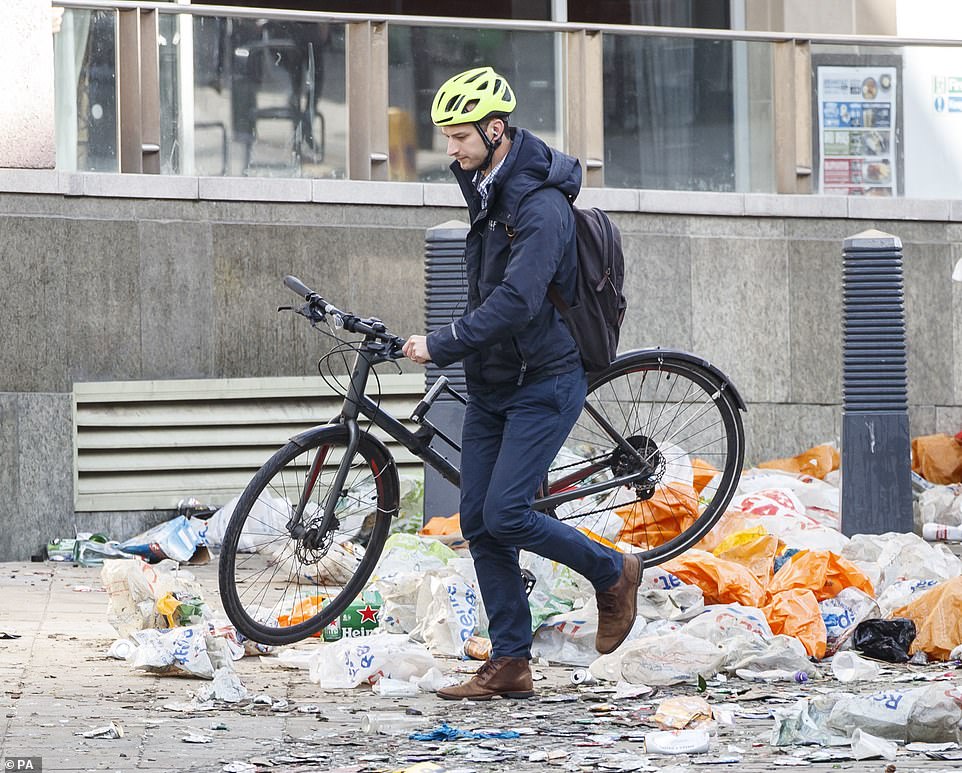 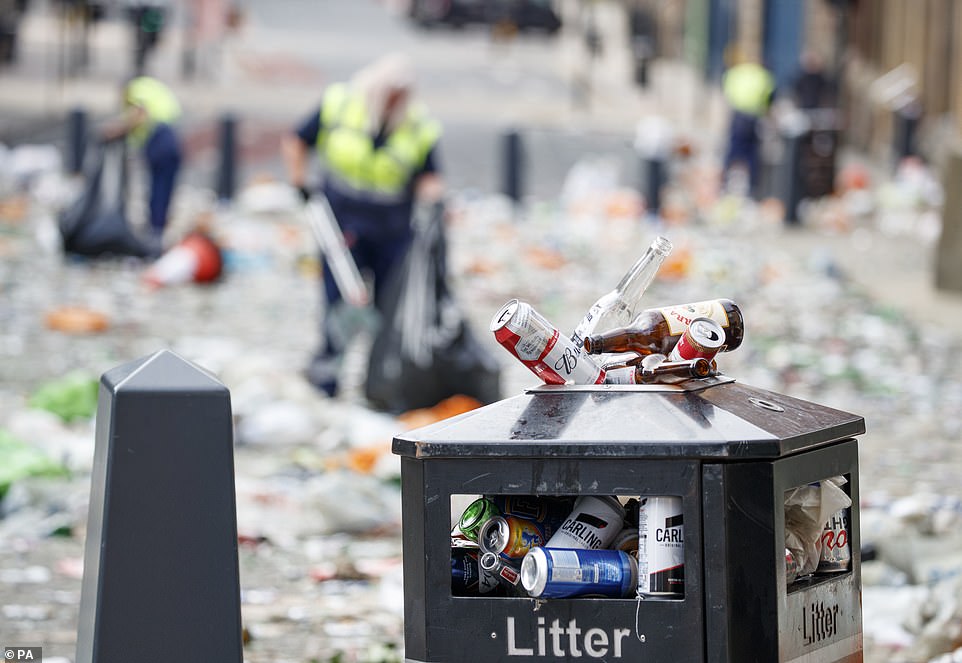 Waste bins were left overflowing after up to 7,000 Leeds United supporters packed into the city centre, with little regard for social distancing rules

A police officer was seriously injured and a number of others hurt as thousands of people gathered to celebrate Leeds United winning the Championship. West Yorkshire Police said a female officer was hit by a bottle and taken to hospital with serious head injuries.

A number of other officers were also hurt along with members of the public as nine people were arrested, the force said.

Temporary Assistant Chief Constable Oz Khan said: ‘Throughout the weekend, fans have gathered across Leeds to celebrate the promotion of Leeds United into the Premier League.

‘We have continued to impress upon fans the importance of the Covid-19 Government guidance and our approach has primarily remained as one of engagement and encouragement.

‘On Sunday, almost 7,000 people gathered in Millennium Square in Leeds.

‘Whilst the vast majority of fans were enjoying themselves and celebrating, there were a small minority of people who began to throw bottles at police officers.

‘A female officer suffered a serious head injury and was taken to hospital for treatment, a number of other officers suffered minor injuries and a further 15 members of the public were injured.’

Mr Khan said officers were deployed to Millennium Square at noon and began to disperse the crowds in the evening.

He said the area was cleared by 11.55pm, with nine people arrested for public order offences.

The officer said: ‘The safety of fans and the wider public is our primary concern.

‘Violence towards police officers will not be tolerated and we deployed an appropriate police response to ensure that the festivities concluded safely.

‘It is important to remind the public that we must not lose sight of the fact that Covid-19 is still with us and that large gatherings are still not permitted.’ 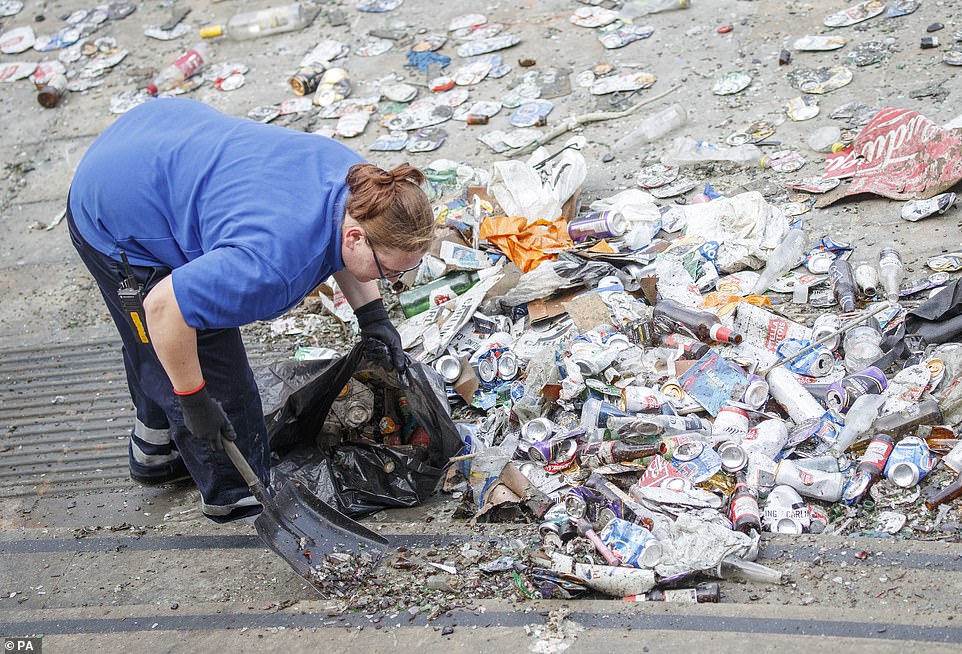 The mess (pictured) was made just a short walk from Leeds General Infirmary, where NHS staff have been battling the coronavirus pandemic for months 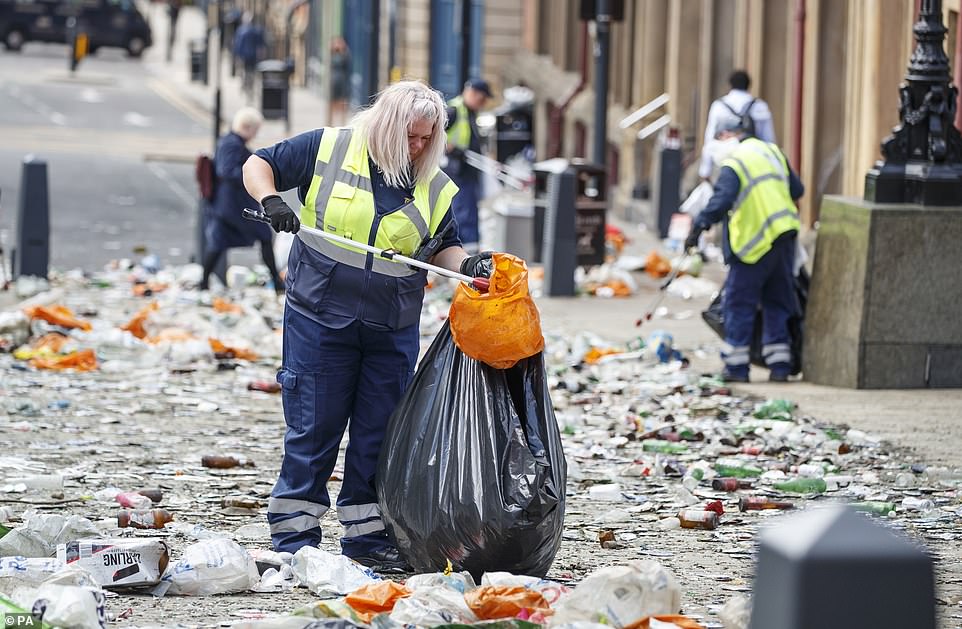 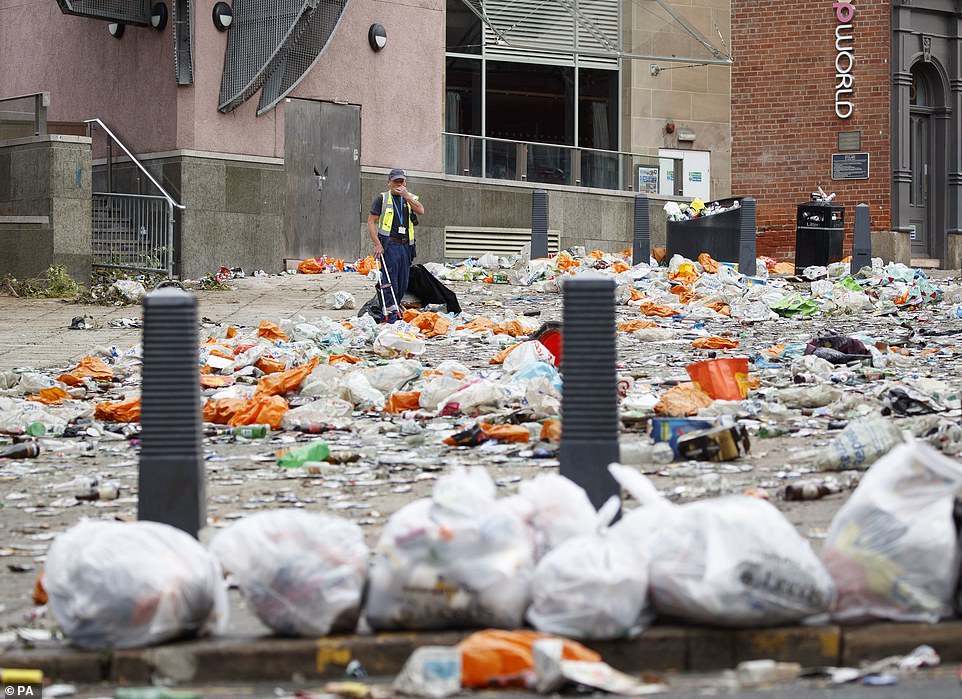 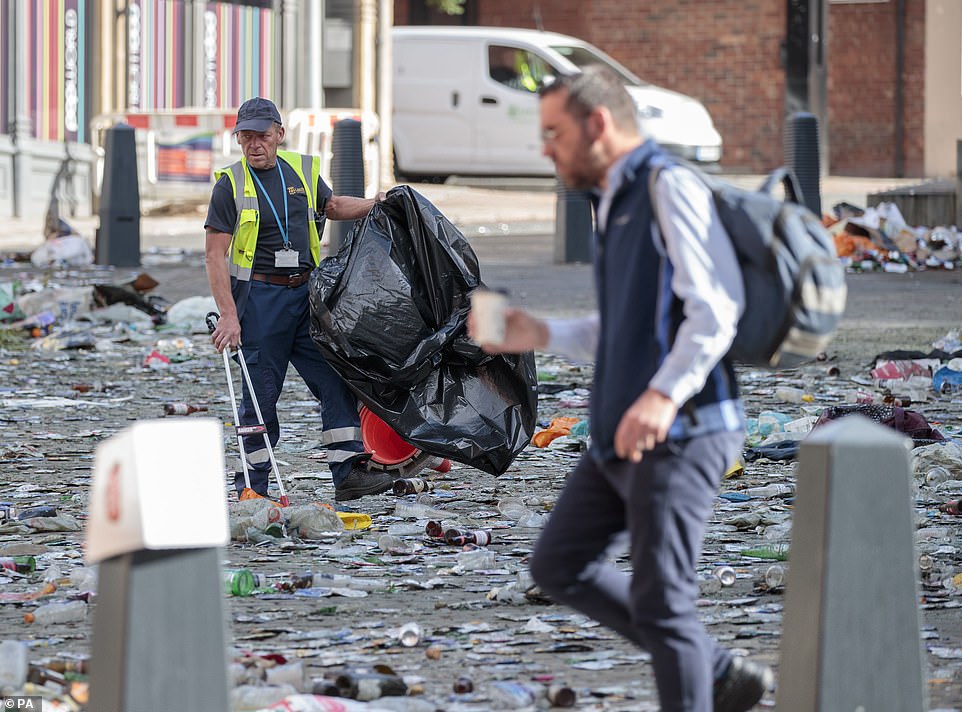 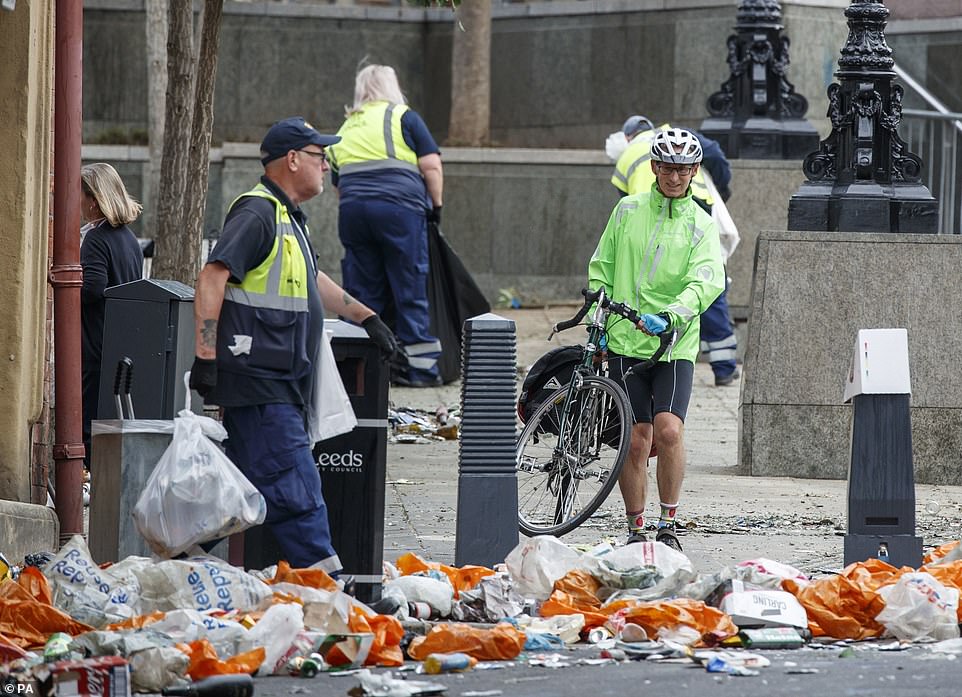 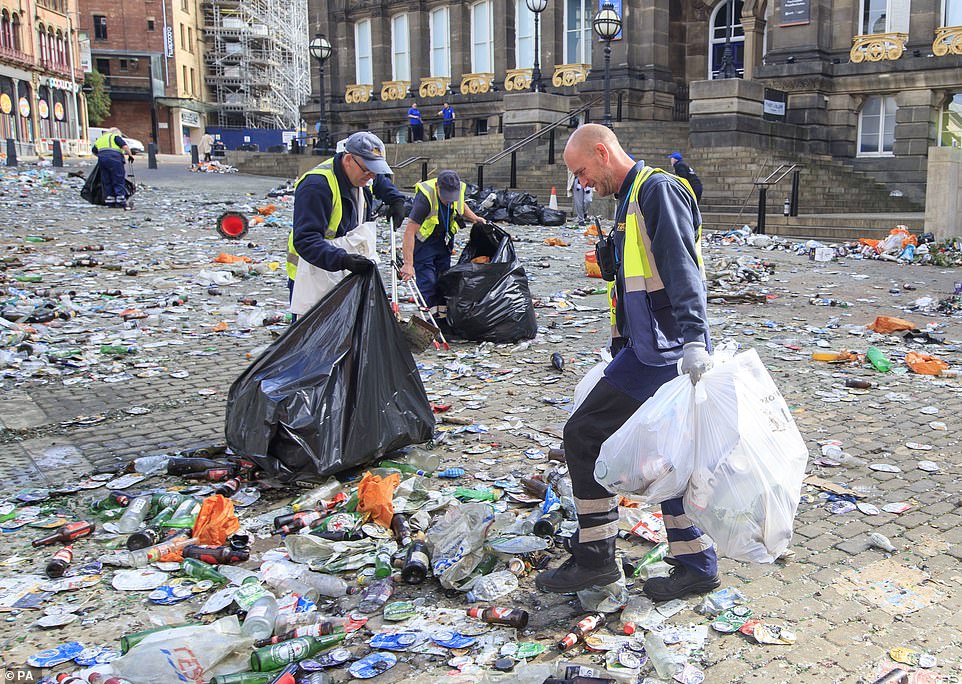 Fans descended on the city centre after heading to Elland Road – the club’s home ground – yesterday to continue their promotion celebrations.

Footage showed supporters ignoring one-metre plus social distancing rules as they drank from cans and lifted one another up, letting off blue and yellow flares.

IBF featherweight boxing champion Josh Warrington, 29, who was born in Leeds, was also spotted among the crowd of fans.

One local commented on Twitter: ‘I live in Leeds and these images of fans celebrating in Millennium Square make me worried that we will be following Leicester for lockdown in a couple of weeks.’

Today’s clean up mirrored Saturday morning after promotion was secured the previous night. Several cars were damaged and litter was strewn across the street following the late-night celebrations.

Leeds owner Andrea Radrizzani had asked supporters to be mindful of the coronavirus pandemic while celebrating. 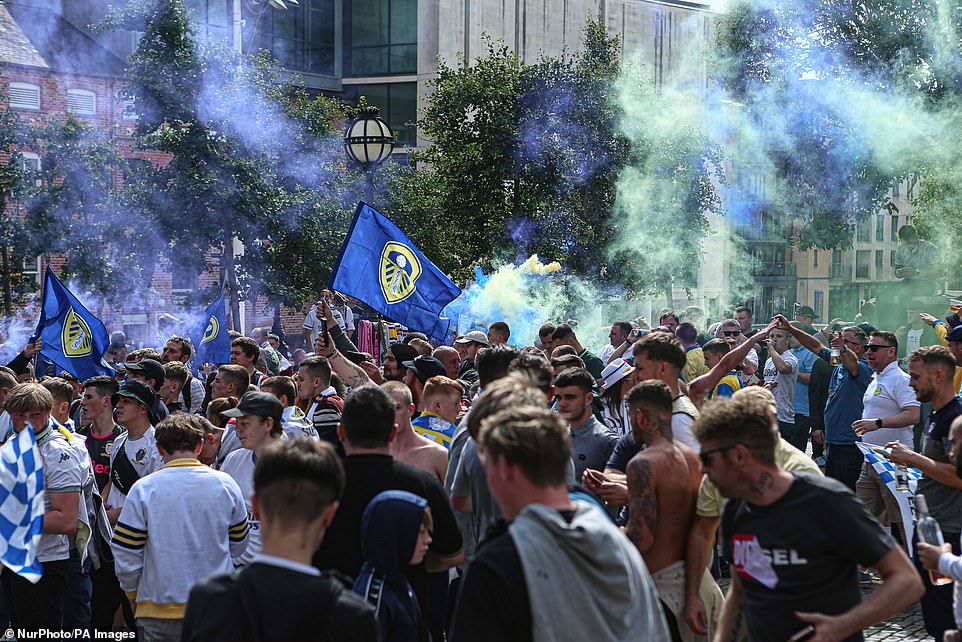 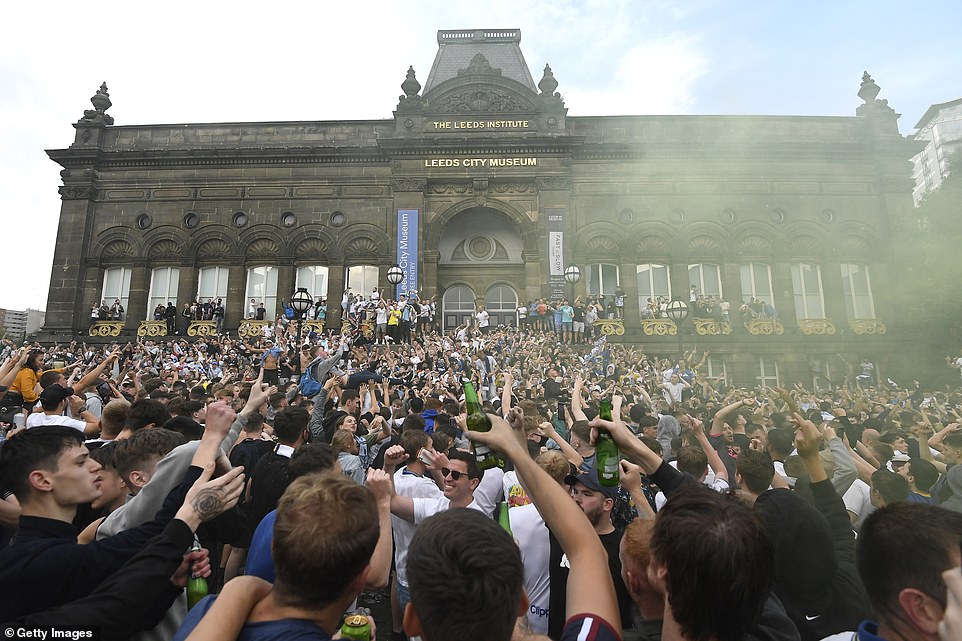 Leeds were promoted to the Premier League on Friday, but today’s result against Derby gave fans further cause to celebrate in Millennium Square yesterday 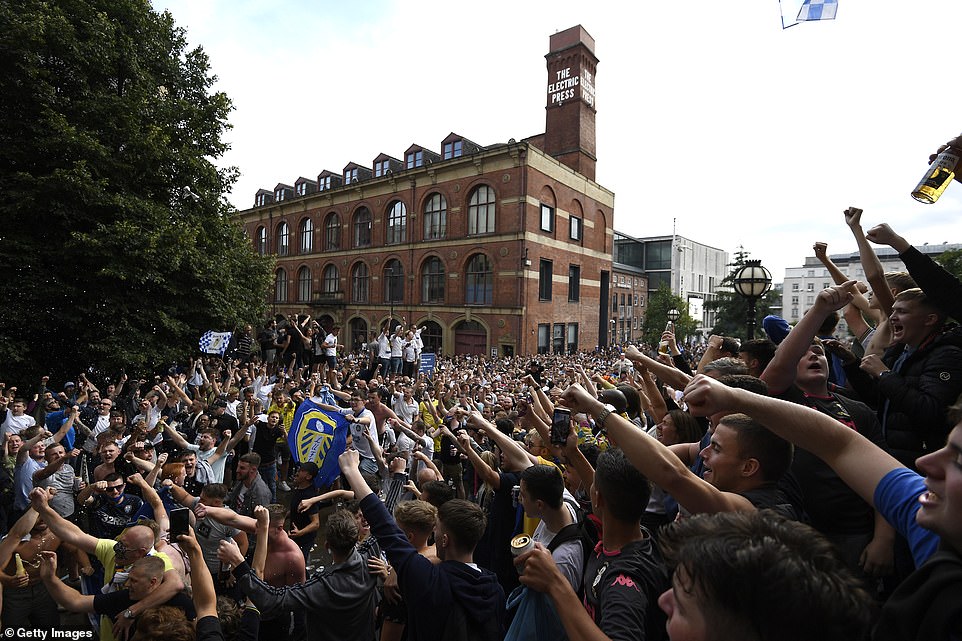 Since Friday Leeds United have been promoted to the Premier League, won the Championship and yesterday beat Derby County 3-1. Fans were out celebrating by packing the city’s streets on Sunday 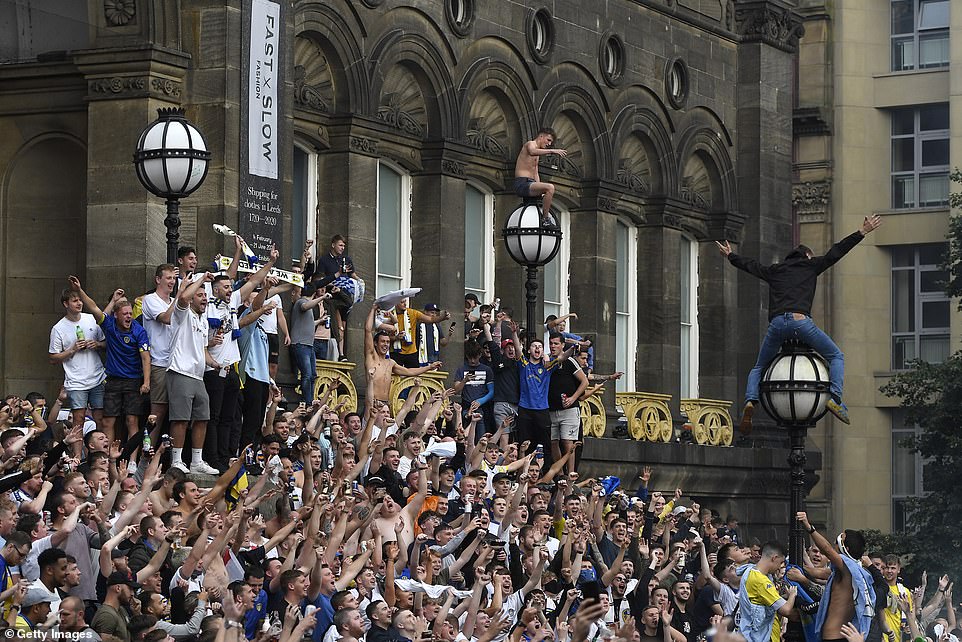 Thousands of Leeds fans were packed together in Millennium Square outside the city’s museum, with supporters climbing walls and lampposts yesterday

He said: ‘The last four months have been incredibly difficult for everyone around the world, but I believe the way our communities have pulled together has been amazing – especially here in Yorkshire where huge progress has been made due to our values and collective spirit.

‘Thanks to the tremendous work of healthcare teams and key workers, and the sacrifices we have all made, the situation has improved.’

‘However, my message to you all is that the fight against Covid-19 is not yet over and we must continue to be sensible.

‘I know many of you are desperate to show our boys support during this important week – but the health and well-being of our loved ones in our community must be our top priority.

‘I have always felt that football means little without the presence of fans, and now I know that for sure. However, it is vitally important we stay safe and keep those around us safe too by staying at home.’

The scenes were reminiscent of crowds in Liverpool last month after the Merseyside team won their first Premier League title.

Merseyside Police had to seal off roads near Anfield as they tried to disperse thousands of fans who gathered outside the ground.

Thousands had flocked to the stadium to let off flares, chant and celebrate the title win, while ignoring social distancing measures.

Some 5,000 managed to surround the ground before police sealed off roads leading to it – though they made no move to break up the party. 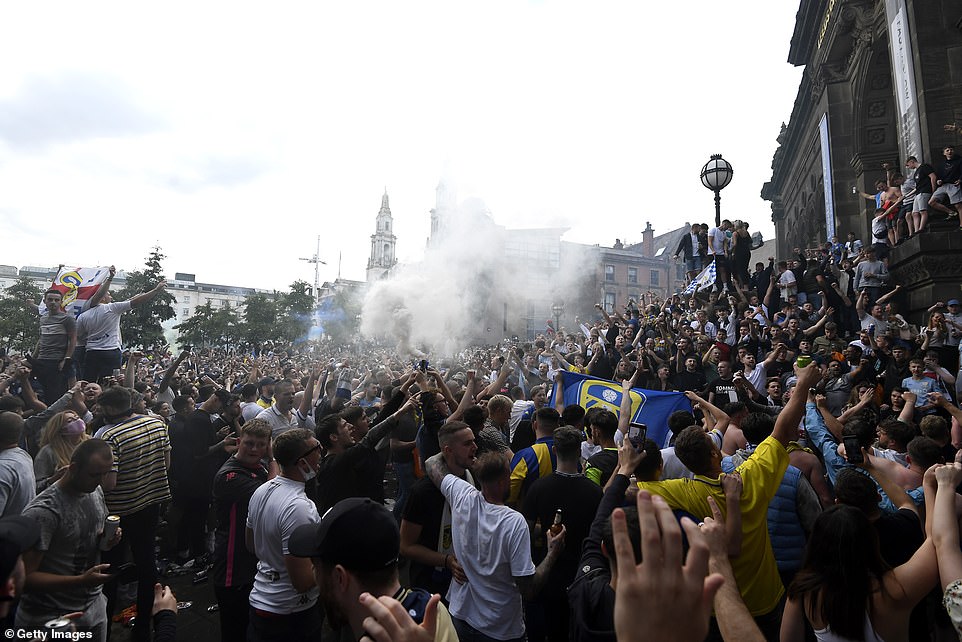 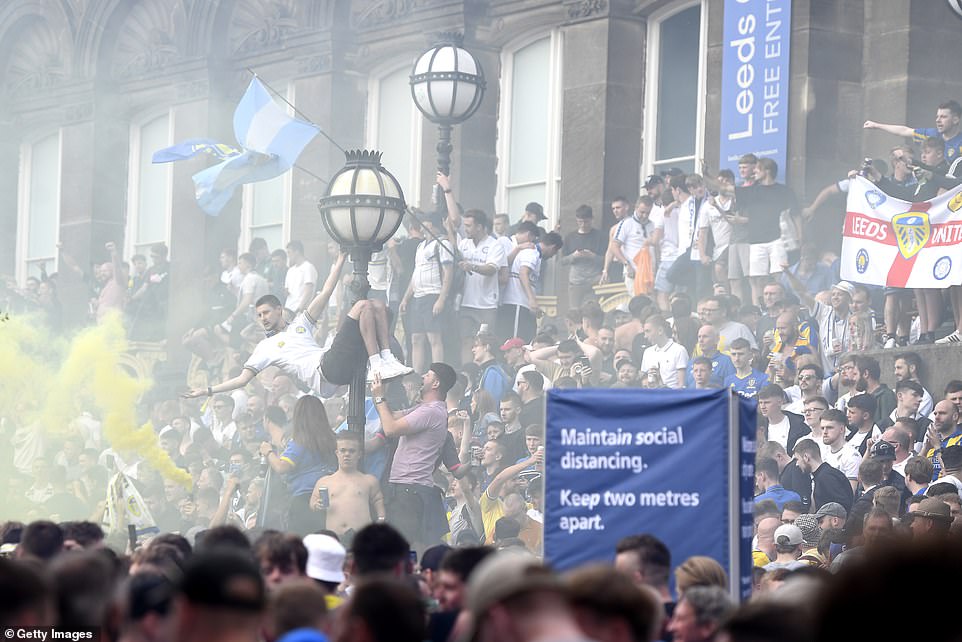 Promotion means Leeds United will return to the Premier League after a 16 year absence, which at one point saw them playing in the third tier of English football 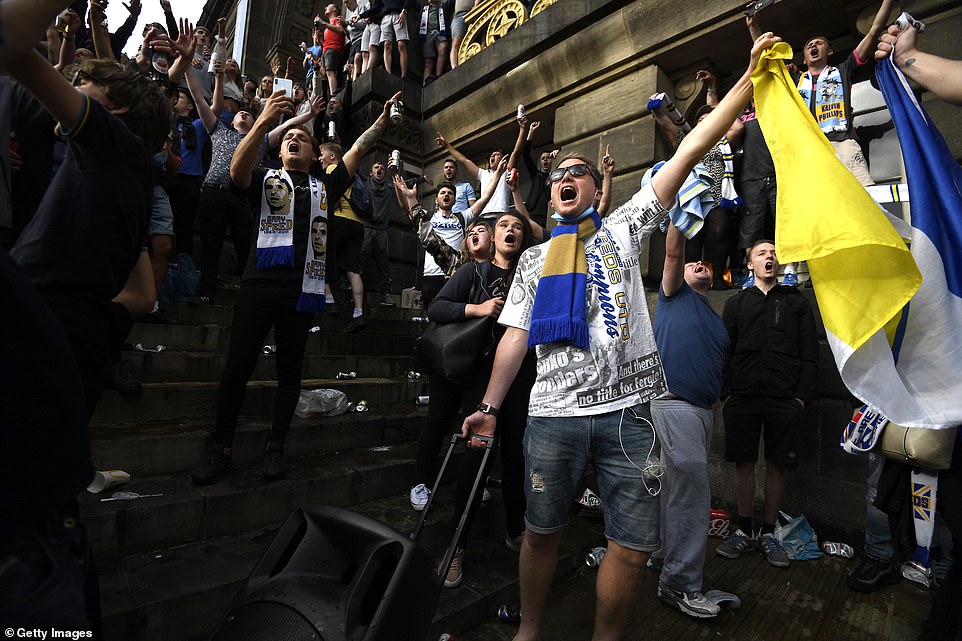 Club owner Andrea Radrizzani had told fans after the club’s promotion: ‘It is vitally important we stay safe and keep those around us safe too by staying at home’ 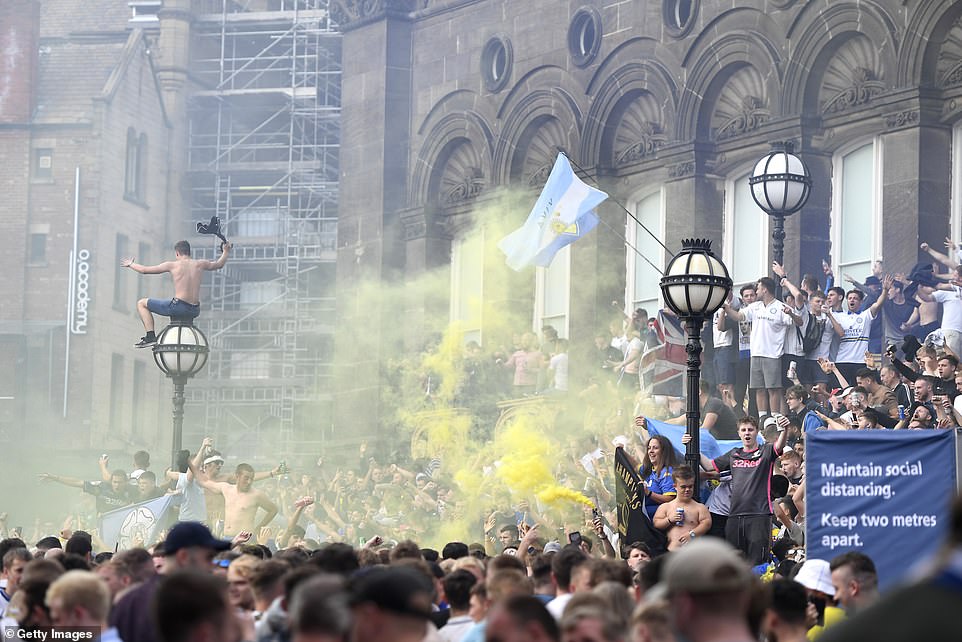 Fans were seen drinking and singing close to one another in Millennium Square on Sunday, despite the club’s owner urging them to celebrate safely 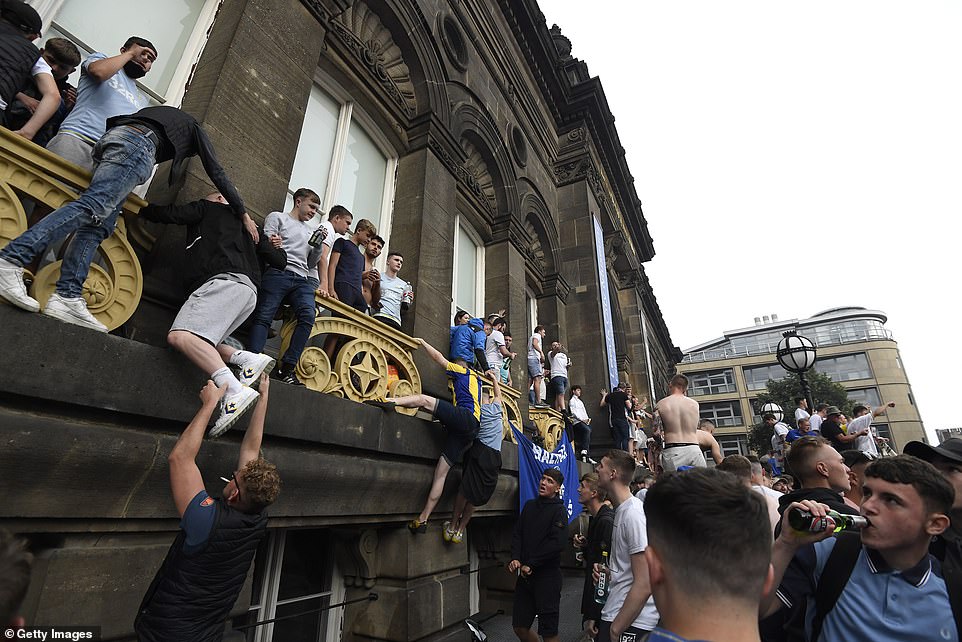