A left-wing writer who threatened to inflict violence on Michael Gove in front of his children has been cautioned by police.

Written after the Cabinet Office Minister voiced his support for Dominic Cummings, it said: ‘I see your c*** of a husband is lying through his f****** teeth all over the TV this morning.

‘I’d pay hard cash to chase the f***** down the street and boot him in the b***s and DEFINITELY in front of your kids cos they need to know what a rank s***house their dad is.’

It is understood that a formal complaint was made last week to Northumbria Police, who cover 47-year-old Mr Dawson’s home city of Sunderland.

His Athletico Mince podcast with Mr Mortimer is said to have amassed 30 million listeners with more than 200,000 tuning in to each episode.

Before turning to podcasting, he ran social media accounts for newspaper publishers Trinity Mirror – now known as Reach plc – including one for current Daily Mirror editor Alison Phillips when she launched the short-lived New Day newspaper. He has also written extensively for the Guardian.

Mr Dawson’s Twitter account had 50,000 followers, but was taken down yesterday. He is the highest-profile troll to be identified during the Dominic Cummings affair.

Ms Vine told a follower who alerted her to Mr Dawson’s tweet: ‘I really hope that if he has kids, he never gets to experience what this feels like.’

Asked whether anyone had complained about threats towards the Goves, Northumbria Police confirmed that it had received a report of alleged threatening posts on social media. 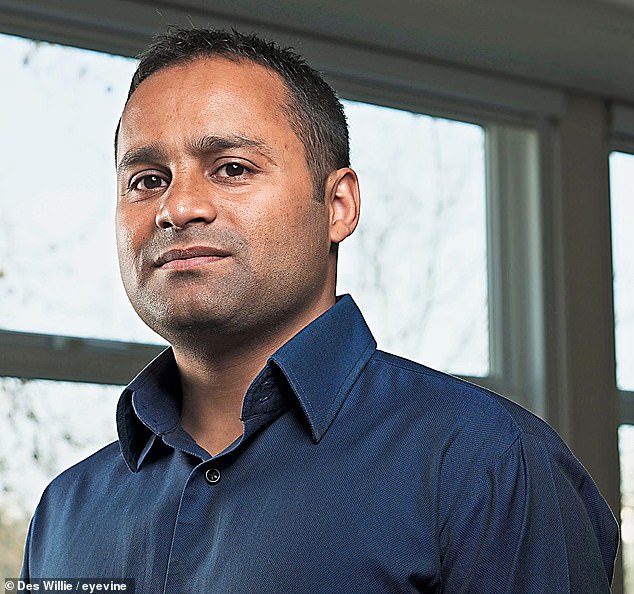 Alom Shaha (pictured), a physics teacher at Camden School for Girls in London, said Michael Gove’s 17-year-old daughter should ‘actively campaign against’ her father before accusing Mr Gove and his wife of supporting fascism

A spokesman said: ‘A 47-year-old man has been interviewed under caution in connection with a report of malicious communication. He has since received a caution by police.’

Mr Dawson’s LinkedIn page describes him as ‘writer, broadcaster, idiot’. A father of two school-age children, his freelance career also includes running social media accounts for PG Tips, E4 and HP Sauce. His podcast with Mr Mortimer began as a football-themed show with Dawson playing to his working class roots in Sunderland, where he lives in a semi-detached house south of the Wear.

Elsewhere on Twitter, a teacher at a girls’ secondary school discussed the Goves’ 17-year-old daughter ‘like a piece of meat’ while targeting her parents with vile abuse.

Alom Shaha, a physics teacher at Camden School for Girls in London, said the 17-year-old should ‘actively campaign against’ her father before accusing Mr Gove and his wife of supporting fascism. 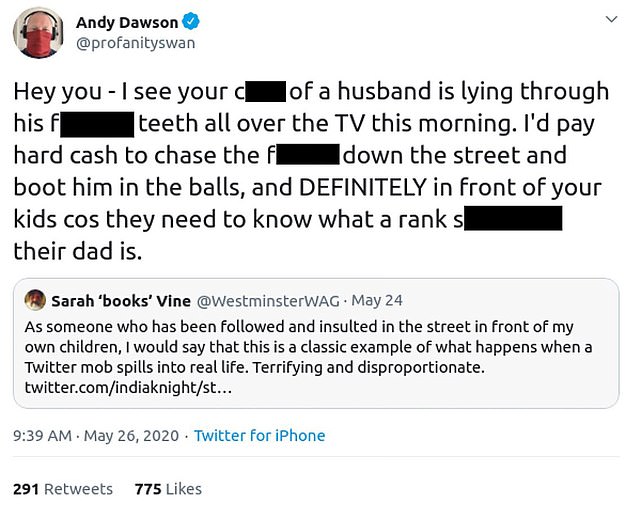 Aggressive: The Tweet Andy Dawson sent. It is understood that a formal complaint was made last week to Northumbria Police, who cover 47-year-old Mr Dawson’s home city of Sunderland

In both cases Ms Vine, a columnist with The Mail on Sunday’s sister paper the Daily Mail, tackled the trolls head on.

She also took on a third, who claimed in an exchange with Shaha that the Goves’ daughter ‘distances’ herself from her father on TikTok.

As others piled in, Ms Vine tweeted: ‘If people can’t see why I’m upset in a week when a man threatened to beat up my husband in front of my kids and where some other men used my daughter as a political football, then I’m sorry. I just am.’

Last night Ms Vine said that Mr Shaha, who she noted used a protected account, and another man had ‘discussed my teenage daughter like a piece of meat on Twitter’.

And she added: ‘It’s one thing to be attacked oneself but when these people come after your children, that’s when it becomes so deeply personal that you can’t ignore it.

‘The fact this bile is being disseminated by teachers is worse.’

Mr Shaha did not respond to a request for comment.

Demonstrator who daubed slogan is a photographer… for The Guardian

By Max Aitchison for the Mail on Sunday

A woman who chalked ‘Dom Cummings and hopefully going’ in massive letters on the road outside his home is a photographer for The Guardian – the newspaper that broke the story of the No 10 adviser’s lockdown row.

Jill Mead’s handiwork featured in national newspapers and on countless TV news bulletins. And she boasted on social media of how she ‘left a short message for Dominic Cummings and then swiftly fled the scene’.

Posting the image on Instagram, she said she hoped the message wasn’t washed away by rain. Her post was met by outrage, with some describing her actions as ‘harassment’ and others questioning her journalistic impartiality.

Ed Crawford, a freelance photojournalist who has worked for the BBC, said: ‘You should know better. This is pathetic.’ Miss Mead was also mocked for misspelling Mr Cummings’s surname with only one ‘m’. 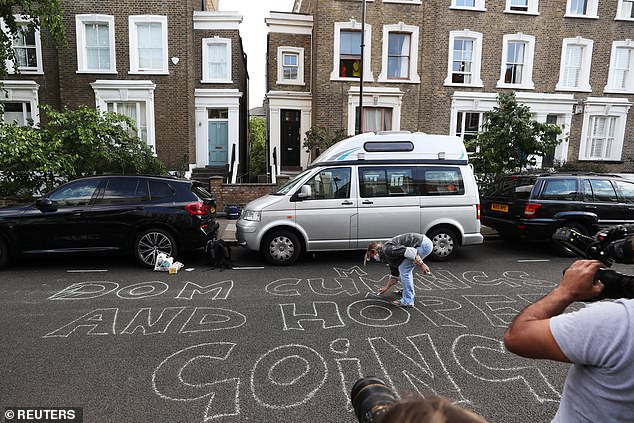 CAN’T SPELL: Jill Mead, who has worked for The Guardian for 22 years, outside Mr Cummings’s home

Miss Mead, who has worked for The Guardian for 22 years, has deleted the post from her Instagram account. Before doing so, she defended her actions, claiming she was there ‘as a member of the public and making a protest’.

Her most recent work for The Guardian was a collection of photographs documenting life under lockdown in London.

A spokesman for the newspaper said: ‘The Guardian did not send the member of staff to Dominic Cummings’s house but we understand that she went there in her own personal time and chalked on the road.

‘She has been told this was an inappropriate thing to do.’