Dangerous gain-of-function research continues to go on in US because of poor oversight, says damning congressional watchdog report prompted by DailyMail.com revelation

Poor oversight and loopholes mean risky virus research feared to have started the Covid pandemic in China continues to go on in the US.

That is the damning conclusion of a report — prompted by an explosive DailyMail.com revelation — into rules around ‘gain of function’ studies.

The Congressional watchdog group the Government Accountability Office (GAO) concluded that federal oversight of the most sensitive scientific experimentation was far too weak and ineffective.

In October, this website shockingly revealed that a Boston University team had created a new Covid strain with an 80 percent kill rate in mice, even though questions remain about whether similar experiments led to the release of Covid. 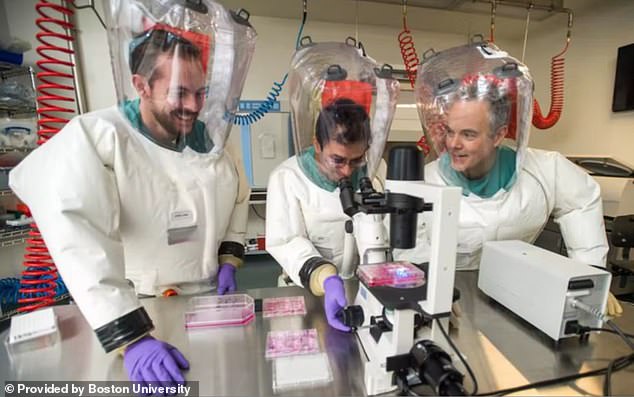 Full-body, air-supplied pressure suits are worn and workers must change their clothing before entering and shower before leaving

This type of research aims to understand the genetic makeup of viruses and how mutations can change their biological functions to become more transmissible and virulent. It often involves engineering pathogens to be more deadly or infectious, which makes stringent infection control procedures crucial.

Advocates of gain of function tests say it helps mankind get ahead of future pandemics, but critics say the risk of starting an outbreak outweighs any theoretical benefit.

Many scientists believe Covid shows signs of human tinkering and that the virus was the product of a leak from the Wuhan Institute of Virology in China, where scientists were carrying out gain of function experiments on bat coronaviruses closely related to Covid.

In the US, researchers with a proposal to conduct the kind of research involving ‘enhanced potential pandemic pathogens’ must be approved by the Department of Health and Human Services (HHS).

HHS developed a framework for approval of these experiments in 2017 after a three-year moratorium that paused all agency reviews of research proposals and funding from going toward such experiments.

Under the rules, HHS assembles a panel of reviewers to carry out a risk-benefit analysis.

The review board looks at three criteria: whether the pros outweigh the cons, whether there are no other equally as effective but less risky options and whether the research team and facility have the capacity to do the work safely and securely and to respond rapidly if there are any accidents or security breaches.

But the new GAO report said that language in the rules was too vague and the review process lacked transparency.

Under the framework, researchers submit proposals on studies that are ‘reasonably anticipated to create, transfer or use enhanced potential pandemic pathogens’.

But it does not explain what ‘reasonably anticipated’ means in this instance.

“The phrase ‘reasonably anticipated’ allows for subjective interpretation and covers a range of certainty regarding the intent of the research and the likelihood of the results,” read the report.

The departmental review group which considers the research proposals is also lacking transparency, according to the GAO

The agency’s study found that there was insufficient transparency when it came to how the group was composed and how it applied the framework standards when reviewing proposals.

The GAO made three recommendations for reforms: that HHS establish a standard for the term reasonably anticipated’ to provide clarity, that non-sensitive information regarding the departmental review process be shared with Congress and the public, and that HHS and the Centers for Disease Control and Prevention (CDC) make changes to the Division of Select Agents and Toxins (DSAT), which maintains a list of pathogens that pose a severe threat to public health.

The term ‘gain of function’ became popular in 2012 after word got out about two separate experiments being conducted at the Erasmus Medical Center in Rotterdam and at the University of Wisconsin.

Scientists had successfully tweaked a strain of highly virulent avian influenza through genetic engineering so that it could be transmitted amongst humans through the air. They injected bird flu into ferrets, causing the virus to replicate and then spread it to other ferrets. The fact that it proliferated among ferrets means it could also spread among humans.

Have we learned nothing? 40 new biochemical labs that handle dangerous viruses are being built around the world

The Coronavirus pandemic has prompted a global surge in laboratories that handle dangerous viruses — despite concerns Covid may have been the result of the risky experiments.

More than 40 facilities certified as biosafety level 3 (BSL-3) or BSL-4 have either been built or have gone into construction since 2020, predominantly across Asia.

Many countries believe they were caught flat-footed by Covid and want to get ahead of the next devastating outbreak by studying pathogens that pose a threat to humans.

Experiments at these labs often involve tinkering with animal viruses to advance treatments and vaccines that could be used in a future outbreak.

But there are widespread concerns that these experiments might actually raise the risk of pandemics — something some experts believe was the case with Covid.

The virus first began spreading from a wet market in Wuhan, about eight miles from the Wuhan Institute of Virology (WIV), a high security biolab that worked with dangerous bat coronaviruses.

Scientists there worked on some of Covid’s closest relatives. They were also found to have wiped crucial databases and stifled independent investigations into the laboratory’s links to the pandemic.

Professor Paul Hunter, an expert in infection diseases at the University of East Anglia in England, told DailyMail.com he was concerned about what all the new labs would be used for.

‘The issue is what you’re going to be using [the labs] for,’ he told this website. ‘If they’re for diagnostic purposes, then you need them. But I don’t think every country needs a BSL-4.’

He added: ‘If they start having a dual purpose for research that has offensive military implications, that is the concern.’

Russia has set out its proposals for 15 of the maximum security labs and India is aiming for 18 BSL-3 and BSL-4 labs in total. The US is also adding a further highest level biosecurity lab to its existing 12.