On the day Leicester scored their 800th goal in the Premier League, they were left to reflect that Kasper Schmeichel has probably prevented a similar number at the other end.

James Maddison’s glorious first-half free-kick was the one that brought up the milestone for Leicester yet it was Schmeichel’s display that ensured they were able to celebrate it with a win.

Much has been said about Schmeichel’s nervy work under the high ball as Leicester looked vulnerable against set pieces for much of the season. Yet as a shot stopper, there are few who deserve comparison with the Leicester skipper. 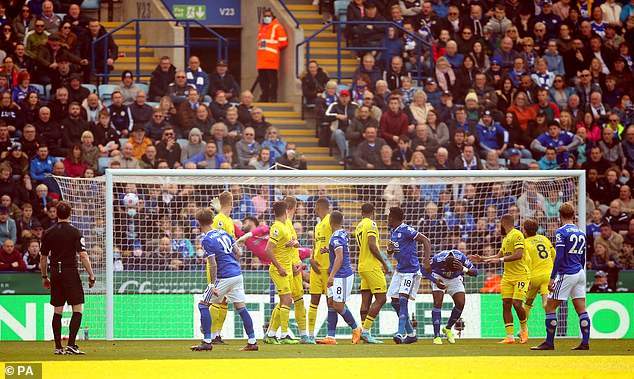 Brentford trio Mathias Jensen, Pontus Jansson and Bryan Mbeumo were all denied by Schmeichel’s remarkable reactions. When they did finally score through Yoane Wissa in the 85th minute, Leicester’s first-half strikes from the returning Timothy Castagne and Maddison meant their efforts came to nothing.

‘I spoke to Kasper and asked him why he always does so well against us,’ said Bees boss Thomas Frank of his fellow Dane. ‘He made some fantastic saves that made it more difficult for us to get close and make it more exciting. He kept them in the game in the second half.’ 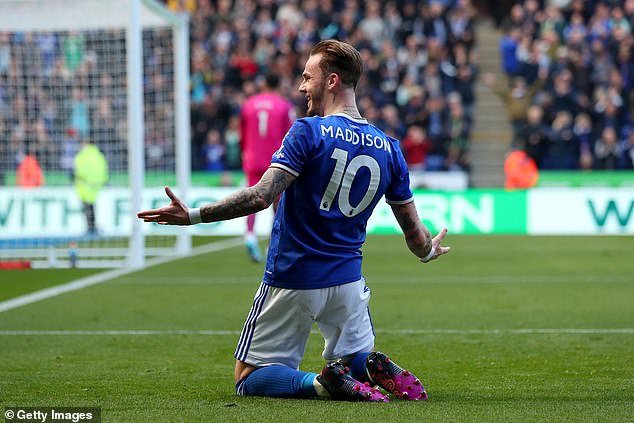 Despite the defeat Brentford – who were without Christian Eriksen due to Covid-19 – are still eight points clear of the bottom three. Leicester, meanwhile, moved into the top 10 and also welcomed back Jonny Evans, who had been out since December 12 due to a hamstring injury.

Three days after they squeezed past Rennes over two legs to qualify for the last eight of the Europa Conference League, the Foxes will welcome the chance to regroup in the international break – and hopefully have striker Jamie Vardy and defender Wesley Fofana ready to go when they return. Wilfred Ndidi, however, could miss the remainder of the campaign with a knee injury sustained against Rennes.

After marking his first appearance of the season with the decisive goal in Rennes, Fofana was not in the squad here. Brendan Rodgers is taking no chances with the defender, who has only just recovered from a broken leg and damaged ankle.

‘I’m very optimistic we can finish the season well,’ said Rodgers. ‘The players coming back will galvanise the squad again.

‘It was an excellent win and in the first half we played some great football, but I demand more than what we produced in the second half. We have to be cleaner with our passing and we can’t use tiredness as an excuse, but we showed a great resilience and mentality.’

After a slow start, this one burst into life when Daniel Amartey and Caglar Soyuncu stopped Mbeumo in his tracks as he prepared to shoot. Replays suggested the Brentford man had a case for a penalty, even though no Brentford player appealed.

Soon afterwards, Leicester seized a 20th-minute lead through Castagne’s outstanding strike. Brought in for Ndidi, Nampalys Mendy hit a crossfield pass that found Harvey Barnes. Barnes slipped the ball into the path of Castagne, who had strolled forward from left-back and sent a ferocious angled drive into the top corner.

Castagne’s immediate reaction was to put his hands on his head, as though he could not believe what he had done. And were it not for Schmeichel, his team-mates would soon have been doing the same.

Wissa deceived James Justin and found Jensen, who was denied from 12 yards.

Had he been in the Brentford goal, however, even Schmeichel would have struggled to stop Leicester doubling their lead in the 33rd minute.

Maddison was fouled by Jensen close to the edge of the box and the playmaker sent a delightful effort over the wall and beyond David Raya, flying to his right. Though Maddison is not an automatic pick for Leicester these days, such talent and technique cannot be ignored.

Early in the second half, Kelechi Iheanacho charged between Kristoffer Ajer and Ethan Pinnock before lifting the ball over Raya. With the whole stadium waiting for it to hit the net, the ball clipped the outside of the post and fell wide. 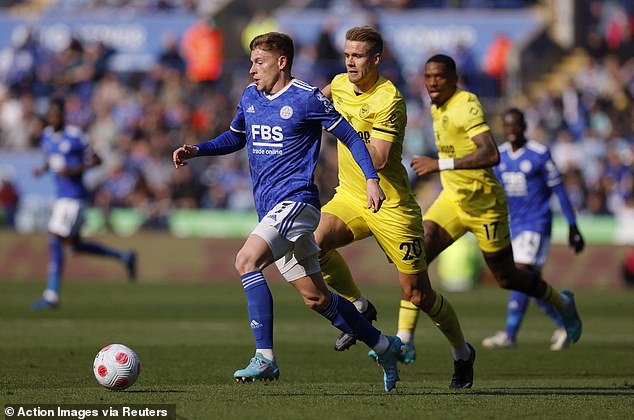 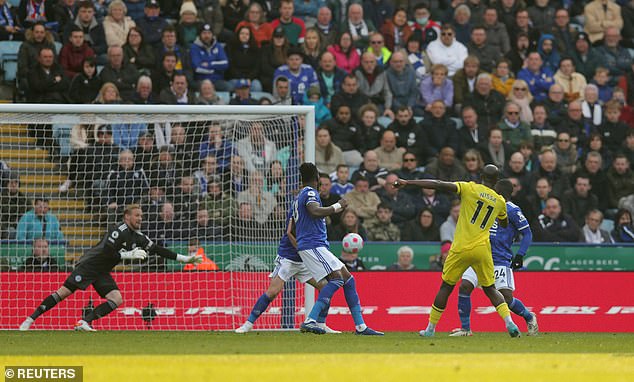 Taking heart from their escape, Brentford were twice denied by Schmeichel’s brilliance. First the skipper turned Pontus Jansson’s header over the bar and stood tall to block Mbeumo’s effort from a similar position at the far post.

At the other end, Barnes just failed to control Iheanacho’s pass in an excellent position, and Justin volleyed narrowly over at the end of a fine run to the far post.

With a little less than 25 minutes remaining, Rodgers brought off Castagne and – to huge cheers – sent on Evans for his first appearance for more than three months, after the Northern Ireland man recovered from a hamstring injury.

By this time Leicester were clearly starting to feel the effects of their efforts in Rennes, and Brentford ensured an exciting finish when Wissa collected a loose ball on the edge of the box and arrowed a fabulous effort into Schmeichel’s left corner.