Leicester 2-2 Brighton: Evan Ferguson’s late header secures a point for the Seagulls at King Power after falling behind to Marc Albrighton and Harvey Barnes goals

Brendan Rodgers is still looking for his first league win since November as Evan Ferguson’s late leveller for Brighton left Leicester still deep in trouble near the foot of the Premier League.

Just as the Foxes looked to be holding on for a pressure-easing three points, they were pegged back three minutes from time. It was no less than Brighton deserved after Danny Welbeck was denied what looked a clear penalty, and Pascal Gross somehow shot over from six yards.

Kaoru Mitoma crowned an outstanding individual display with a brilliant first-half goal to put Brighton ahead, but Leicester kept going against in-form opposition and levelled in the 38th minute through Marc Albrighton, who had replaced the injured Dennis Praet only three minutes earlier. Then Albrighton had a hand in the second as his corner was flicked on to Harvey Barnes at the far post, who drilled it home. Yet Brighton’s pressure finally told when substitute Ferguson headed with three minutes left. 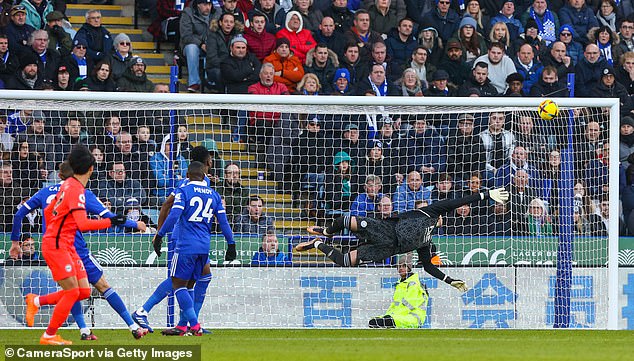 With chairman Aiyawatt Srivaddhanaprabha watching from the directors’ box, James Maddison made his first appearance since before the World Cup as a second-half substitute. The playmaker has recovered from knee trouble and was given a hero’s welcome.

From the off there was a tense atmosphere inside the ground, with the home supporters fearing an early goal against their fragile team.

Leicester’s approach was similarly timid. Whenever Brighton had the ball, centre-backs Lewis Dunk and Jan Paul van Hecke were able to advance unchallenged with it to the halfway line. When Van Hecke was tested early on, his mistake should have led to a Leicester chance. The Dutchman, in for the injured Levi Colwill, advanced to intercept a pass to the fit-again Kiernan Dewsbury-Hall but did not get there, allowing the midfielder to release Harvey Barnes on the left.

Leicester found themselves two on one but Barnes’ pass to Vardy forced the forward to check his run, and the chance was lost.

Brighton came much closer in the 24th minute when Pascal Gross’ corner was flicked on by Danny Welbeck and headed over from a yard by Van Hecke. It was a lucky escape for Leicester as Welbeck’s touch changed the trajectory of the ball at the crucial moment.

Moments later, Leicester were punished for sloppy play in midfield. Dewsbury-Hall was robbed by Alexis Mac Allister. Pervis Estupinan collected the pass and transferred it to Mitoma, who was given far too much room by Timothy Castagne to cut inside and plant a fabulous strike into the far corner from 20 yards.

Straight after the goal, Adam Lallana picked up and injury and he was soon followed off the pitch by Leicester’s Dennis Praet. Yet Praet’s departure indirectly led to Leicester’s equaliser. 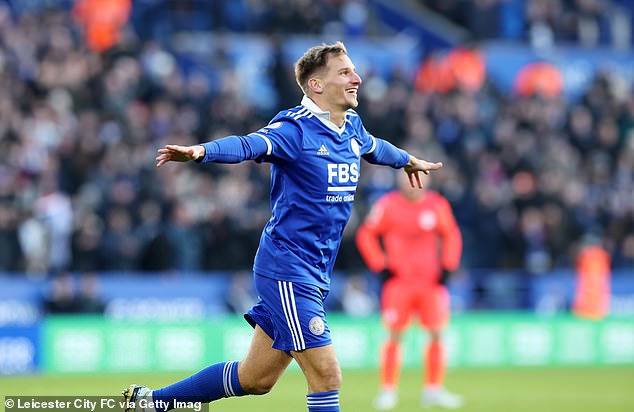 Barnes ran at Joel Veltman, who had replaced Lallana, only to see his shot rebound off the Dutchman. Lewis Dunk blocked the follow-up from Youri Tielemans but could not stop Albrighton making it third time lucky.

Leicester were made to wait for confirmation by another interminable VAR check for a possible offside against Barnes, but the goal stood – and spared the home side being booed off at half-time.

The late goal did not bring a braver approach, as Brighton continued to make all the running, but they lacked luck and calmness at the vital moments. Danny Welbeck was clipped by Luke Thomas as he prepared to shoot yet both referee Thomas Bramall and VAR Lee Mason deemed no foul had been committed. 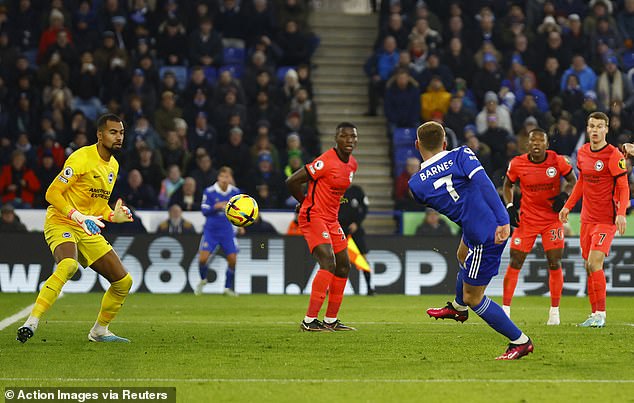 Brighton boss Roberto De Zerbi was furious and picked up a booking, as did Leicester goalkeeping coach Mike Stowell. And the Italian’s mood darkened again when Mitoma made a fool of Castagne on the left and slipped the ball to Pascal Gross, who somehow fired well over the bar when unmarked six yards from goal.

Leicester made the most of their good fortune to take the lead soon after the hour mark. Barnes’ shot had just been deflected behind for a corner and when Albrighton’s delivery was flicked on by Luke Thomas, the winger supplied a controlled finish at the far post. When Maddison made his entrance nearly 20 minutes from the end in place of Dewsbury-Hall, the roar was as loud as it had been for the Foxes’ goals. 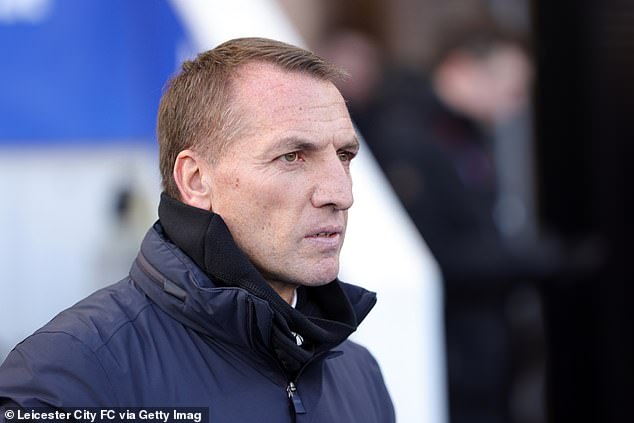 Maddison was convinced he should have had a free-kick on the edge of the box and was furious with referee Thomas Bramall. Brighton continued to press and Solly March burst in from the left and saw a fierce effort parried by Ward. The goalkeeper then kept his side ahead in bizarre fashion, saving with his foot as Mac Allister’s shot took a deflection off Wout Faes.

The visitors’ pressure finally told when Estupinan crossed from the left and Ferguson, who had come on for Welbeck, profited from some awful marking to guide his header in off the far post.

De Zerbi raced on to the pitch to urge his side back to halfway but the match ended all square after Maddison’s late free-kick from the edge of the box hit the wall.