Brendan Rodgers paid tribute to Leicester’s late owner Vichai Srivaddhanaprabha after the club overcame Brighton on the third anniversary of his death.

This was Leicester’s first fixture on October 27, exactly three years since the helicopter crash near the King Power Stadium that killed Srivaddhanaprabha – known as Khun Vichai – and Kaveporn Punpare, Nusara Suknamai, Eric Swaffer and Izabela Lechowicz.

Fans raised a banner carrying Khun Vichai’s image and the message ‘Always In Our Hearts’. They also held scarves bearing his name as they observed a minute’s silence. 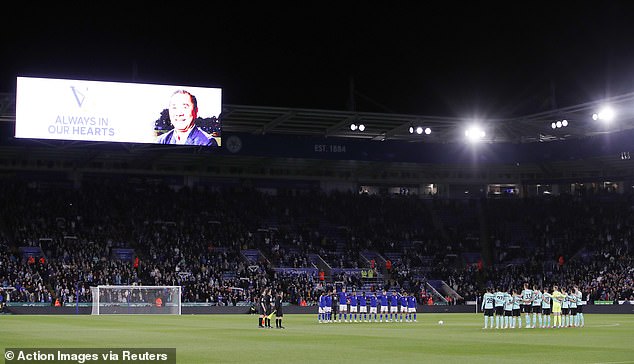 On an emotional night, tributes were paid to Leicester’s late owner Vichai Srivaddhanaprabha 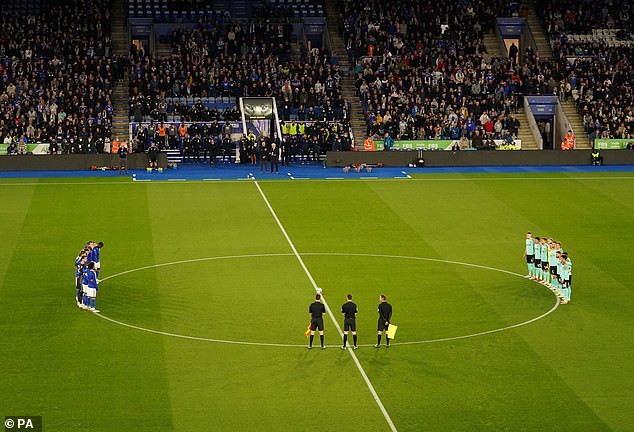 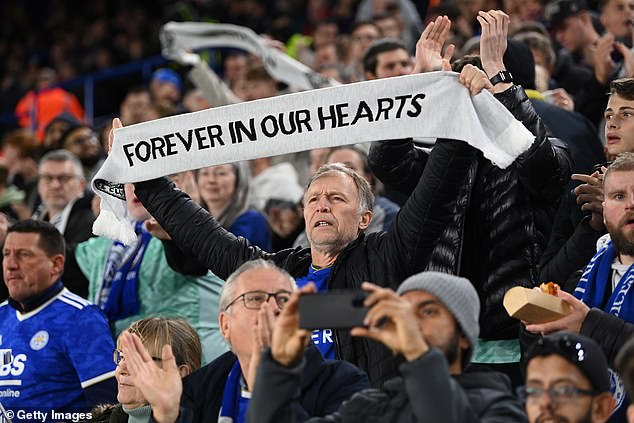 After a 2-2 draw, Leicester progressed to the quarter-finals of the Carabao Cup 4-2 on penalties and Rodgers revealed his squad had celebrated the life of Vichai in the build-up to the game.

‘We had a lunch with the players and staff on Tuesday, and then spent time in the memorial garden at the ground before the game,’ said Rodgers.

‘We reflected on what an incredible man he was and how we have a responsibility to continue that legacy.

‘I never met Khun Vichai but since I came here (in February 2019) I’ve felt as though I knew him. The fans paid a brilliant tribute and I’m glad we could send them home happy.’

Given his chance with Kasper Schmeichel rested, Danny Ward saved Brighton’s fourth effort from Enock Mwepu to clinch a 4-2 shoot-out triumph for the Foxes.

The penalties followed an absorbing 90 minutes in which Leicester twice took the lead through Harvey Barnes and Ademola Lookman, only for Adam Webster and substitute Mwepu to bring Brighton back on terms.

After successful kicks from James Maddison, Pascal Gross and Barnes, Neal Maupay – another sub – hit the bar for Brighton. Patson Daka, Alexis Mac Allister and Ricardo Pereira then all scored, leaving Mwepu to try to keep Brighton in it. His shot was hit too close to Ward who made a simple save and sealed Leicester’s progress.

‘We are now three games from picking up a trophy and of course we would like to do that,’ Rodgers added.

Vichai’s son, current chairman Aiyawatt Srivaddhanaprabha, was not at the stadium for this one but would have been delighted at Leicester’s start. 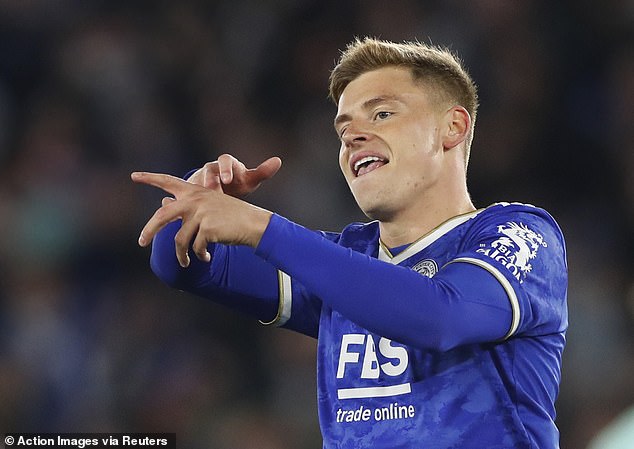 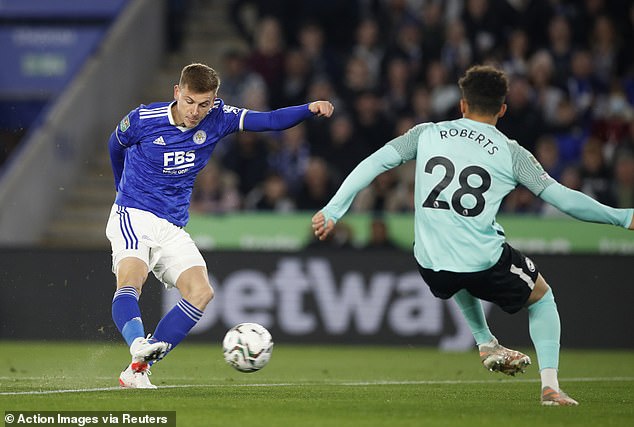 Rodgers retained only Caglar Soyuncu from the team that started last Sunday’s 2-1 win at Brentford though his side still flew out of the traps and took a sixth minute lead.

Daka hurried goalkeeper Jason Steele into a risky pass towards Webster, who was robbed by Barnes outside the box. The recalled winger steadied himself before firing home with Steele out of position.

Moments later Leicester were inches from making it 2-0 when Kiernan Dewsbury-Hall hit the bar. 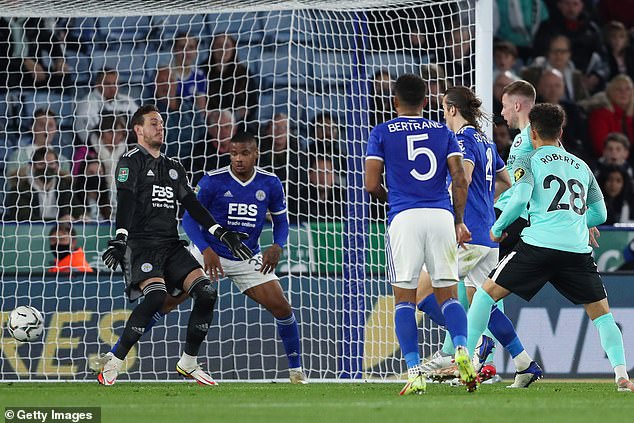 That should have ensured the teams were all square at the break – only for Brighton to gift Leicester a second.

When Daka lost possession, Jeremy Sarmiento woefully under-hit his back pass, allowing Lookman to reach the ball ahead of Steele and slide it under him to open his Leicester account following his loan move from RB Leipzig.

Sarmiento looked heartbroken but early in the second half he was in the thick of the action, sending in Aaron Connolly to deliver a low ball that Soyuncu diverted behind.

Mwepu had replaced the injured Dan Burn for the second half and saw a 20-yard effort deflected wide. 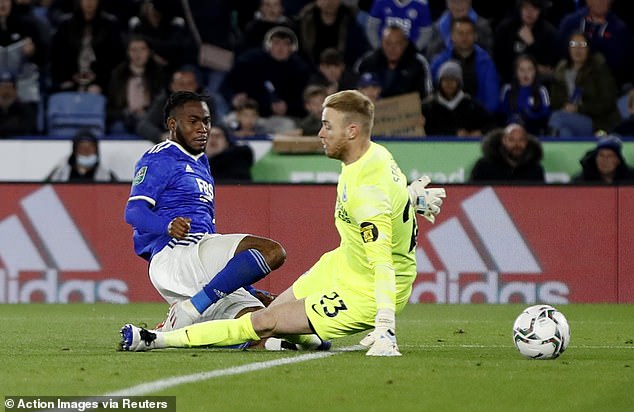 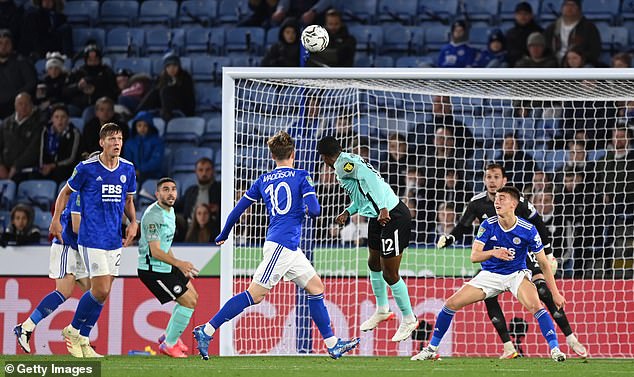 Leicester, meanwhile, sent on Sunday’s match-winner Maddison and he was close to scoring almost immediately. Barnes’ close-range effort was blocked by Steele before Duffy produced a fine sliding challenge to deny Maddison from the rebound.

That was the cue for Albion boss Graham Potter to call for two of his regulars and they promptly combined to create the second equaliser. Maupay found Marc Cucurella on the left and his floated cross was expertly headed beyond Ward by Mwepu.

The final chance before the spot-kicks fell to Connolly but he headed Cucurella’s cross wide at the end of stoppage time.

‘I’m disappointed to go out but it was a very positive performance and I’m really happy with the guys,’ said Potter, who added he was ‘concerned’ by Burn’s injury. The defender is due to have a scan on Thursday.