A Bedfordshire town has been hit by an earthquake – the third tremor in two weeks.

The British Geological Survey (BGS) say the 3.0 magnitude earthquake was centered around the town of Leighton Buzzard.

It comes just weeks after a 3.5 quake struck the same town, on September 8.

It is thought to have been an aftershock from the quake that was felt on September 8.

The latest tremor is said to have been around six miles deep and slightly to the north of the town, according to the BGS, who believe the series of quakes to be ‘naturally occurring’.

Independent scientific organization, the European-Mediterranean Seismological Centre (EMSC), report the quake to be around 3.1 magnitude and slightly more to the south, near to the Hertfordshire village of Tring.

According to the BGS, the quake took place around 8.30am today, though twitter users in Leighton Buzzard reported feeling the latest shaking shortly after 9.30am this morning.

One said: ‘Was that another earthquake in Leighton Buzzard? Anyone else feel that?’

A Bedfordshire town has been hit by an earthquake – the third tremor in two weeks. The British Geological Survey (BGS) says it took place around Leighton Buzzard, while a map (pictured) by the the European-Mediterranean Seismological Centre (EMSC), maps it near to Hemel Hempstead 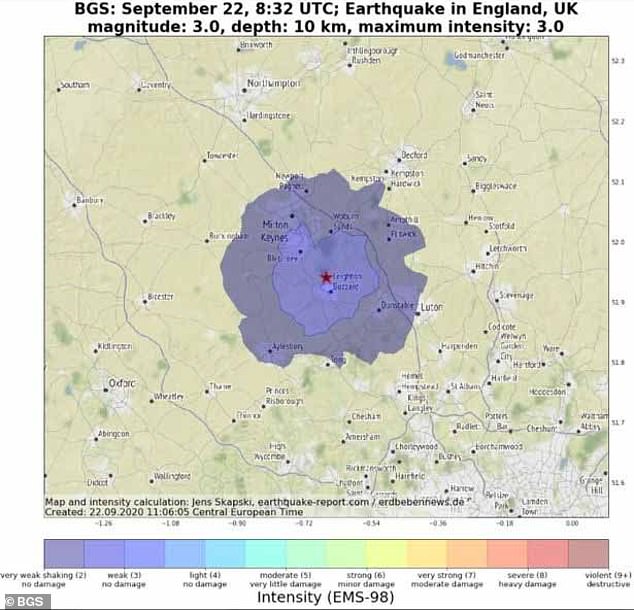 The British Geological Survey (BGS) say the 3.0 magnitude earthquake was centered on Leighton Buzzard. Pictured: A map showing what residents would have likely felt in the area around the quake 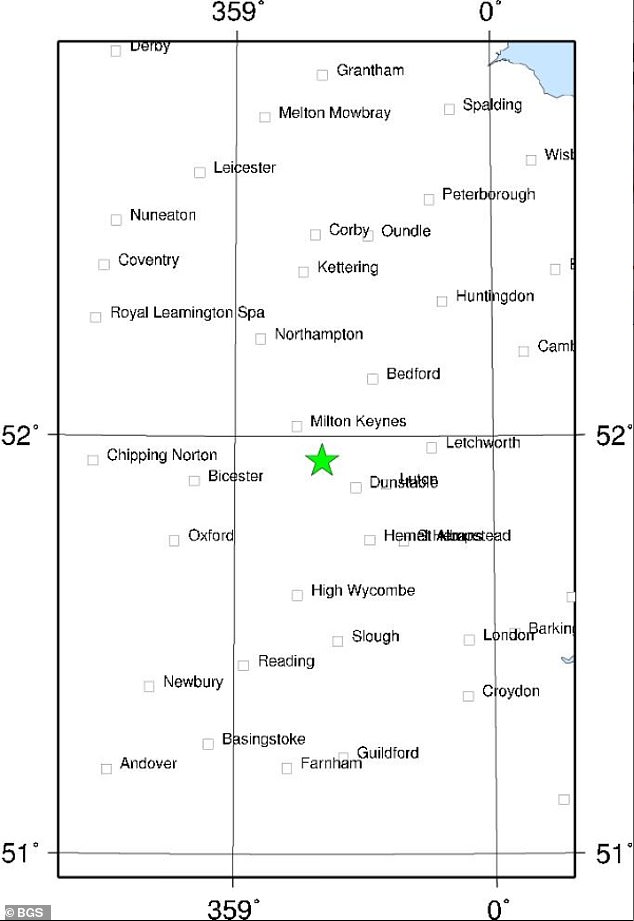 The latest tremor is said to have been around six miles deep and slightly to the north of Leighton Buzzard, according to the BGS 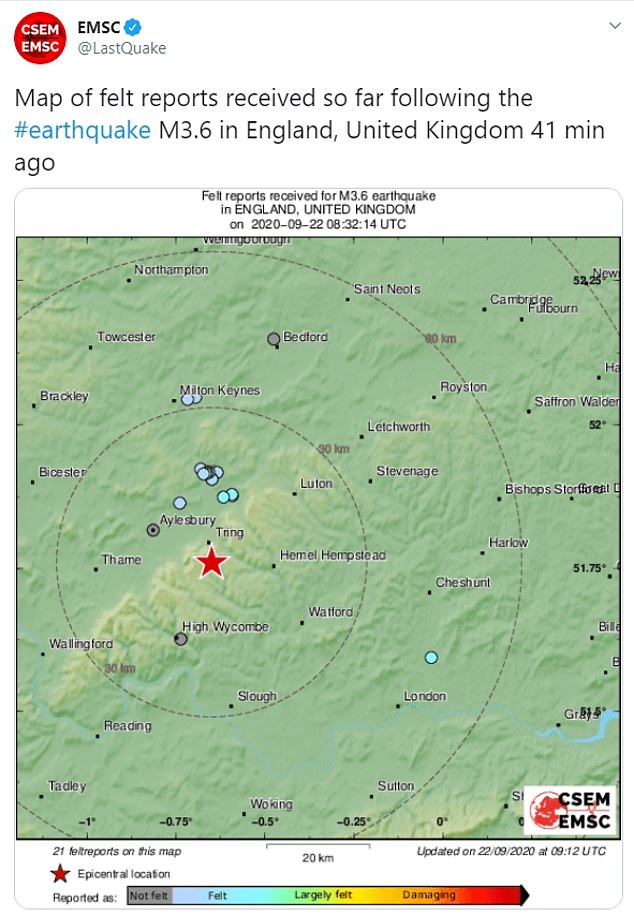 Independent scientific organization, EMSC, report the quake as around 3.6 magnitude and slightly south-west, near to the village of Tring 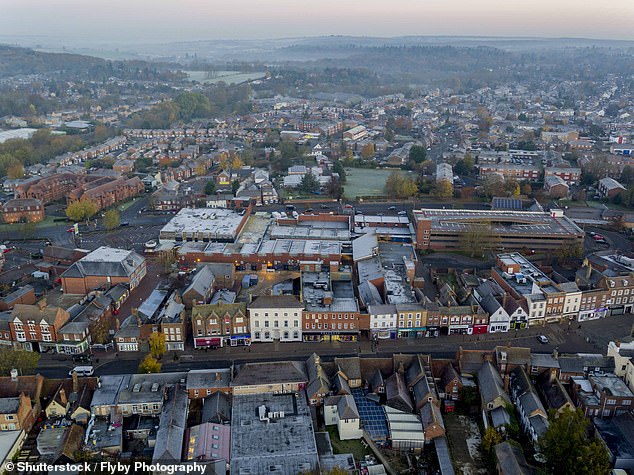 HOW MANY EARTHQUAKES HAVE SHAKEN THE UK IN RECENT YEARS?

The UK is expected to have an earthquake measuring 5.0 and higher on the Richter scale about once every eight years.

Tremors between 1.0 and 1.9 are expected across the country every two-and-a-half days.

The biggest earthquake in recent years was on February 27, 2008, with Market Rasen, Lincolnshire at its epicentre. It measured 5.2 on the Richter scale and was felt across much of Britain, including in Newcastle, Yorkshire, London, the Midlands, Norfolk and Wales.

In the past five years there have been 14 earthquakes in the UK.

On February 20, 2014, the Bristol Channel experienced the UK’s biggest quake in six years, measuring 4.1 on the Richter scale.

The East Midlands were rocked once again on January 28 2015, when tremors returned to Rutland, with that year’s other quakes falling in Sandwich, Kent, four months later, when Gwynned, South Wales was also hit in separate tremors.

There were two earthquakes in one day in Moidart in the Highlands of Scotland on August 4 this year. The tremor at 3.43pm measured 3.8 and one at 3.45pm was 3.4.

A tweet posted this morning by the BGS said: ‘We are getting reports of an earthquake in the Leighton Buzzard area this morning.

‘We are currently investigating this and will update you as soon as we can.’

In a follow up tweet, the BGS said: ‘We’re receiving reports about the earthquake, which followed previous events in the same area on September 8 and 13, with magnitudes 3.5 and 2.1.

‘Reports describe ‘only lasted a couple of seconds’ and ‘just felt a single jolt, a bit like being in a car that has done an emergency stop!’

One Twitter user, Dina Gower, said: ‘Felt it about 9:34am in Leighton Buzzard – house shook and windows rattled but not as strong as on September 8.’

Another, James Emm, said: ‘Shook our house in Linslade / Leighton buzzard at about 9.34ish for a moment.

‘Would day slightly weaker too or just not on top of the epicenter as much this time.’

Another, Joe Reggelt, added: ‘Conservatory rattled and the similar ‘explosion’ sound as September 8 event but not as loud.’

The series of tremors in the town could be part of a ‘swarm’ of earthquakes, the BGS has told Mirror Online.

If that is the case, it could be similar to a series of 34 earthquakes known as the ‘Surrey swarm’, which took place between April 2018 and May 2019.

At the time, neighbours blamed oil wells a few miles away in Horse Hill and Brockham.

However, a study by Imperial College London, the University of Bristol and the British Geological Survey (BGS) concluded the earthquakes were natural.

Speaking about the Leighton Buzzard tremors, Glenn Ford, a seismologist with the BGS, said: ‘What we’re seeing here is a small aftershock from that earthquake (on September 8).’

Mr Ford said it was ‘typical behaviour’ which had been seen in different areas of the UK ‘on many occasions’. 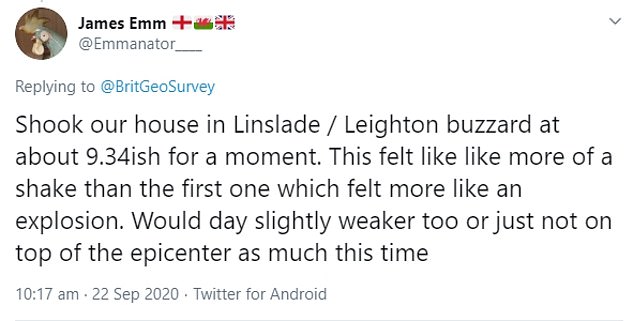 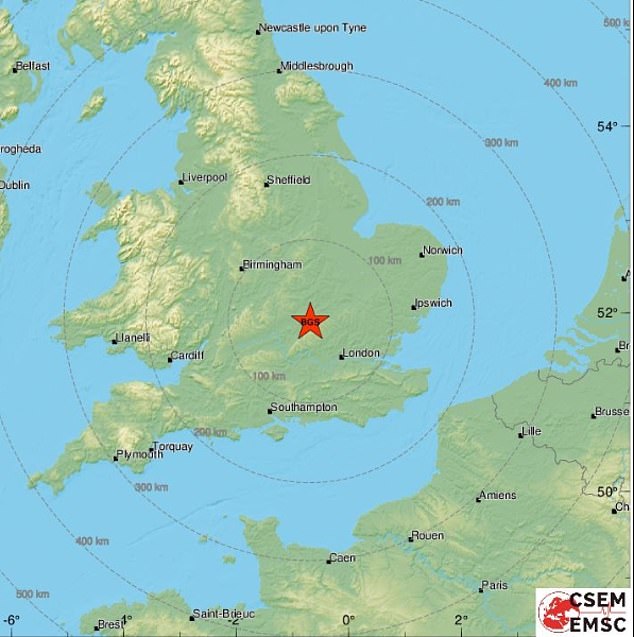 He added: ‘There’s obviously been some stress been building up in that particular area and we’ve had the initial earthquake.

‘It’s maybe just still rebalancing the stress regime in that particular part of the world and we’re getting these little aftershocks occurring as well.

‘It probably will settle down soon but could we get another one? We certainly could, but when it could happen, we don’t know.’