Lena Dunham has slammed ‘gnarly’ body and fat shaming comments she received after sharing her recent wedding photos, and her weight gain since she ‘was last on television.’

The 35-year-old Girls creator tied the knot with musician Luis Felber, 35, last week, with Taylor Swift as her bridesmaid, and went back on social media to post the happy news.

However, after reading some of the negative responses about her appearance, Dunham was inspired to write a lengthy reply to her 2.8 million Instagram followers on Wednesday.

Hitting back: Lena Dunham has slammed ‘gnarly’ body shaming comments after sharing her weight gain and wedding photos, in a new Instagram post on Wednesday

‘It’s a little too easy to feel the glow of support and forget about the cesspool lurking behind it,’ she said about sharing her special day on social media. ‘So I took a peek, and saw some gnarly s***, most not worth responding to or even sharing with you.’

But the star said one narrative of the comments was that she should ‘somehow be ashamed because my body has changed since I was last on television.’

‘Firstly “did Lena eat the cast of Girls” just isn’t a very good joke.’ she said, adding: ‘Secondly, it’s ironic to have my body compared to a body that was also the subject of public scorn – an echo chamber of body shaming.’ 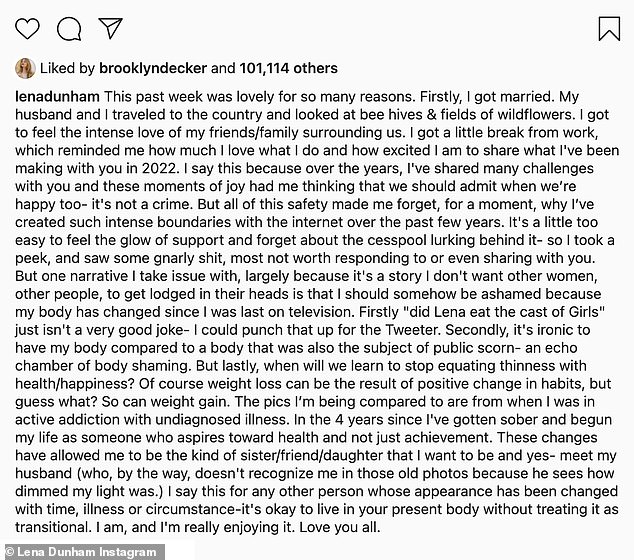 Speaking out: The Girls star posted a lengthy caption to her Instagram following her wedding 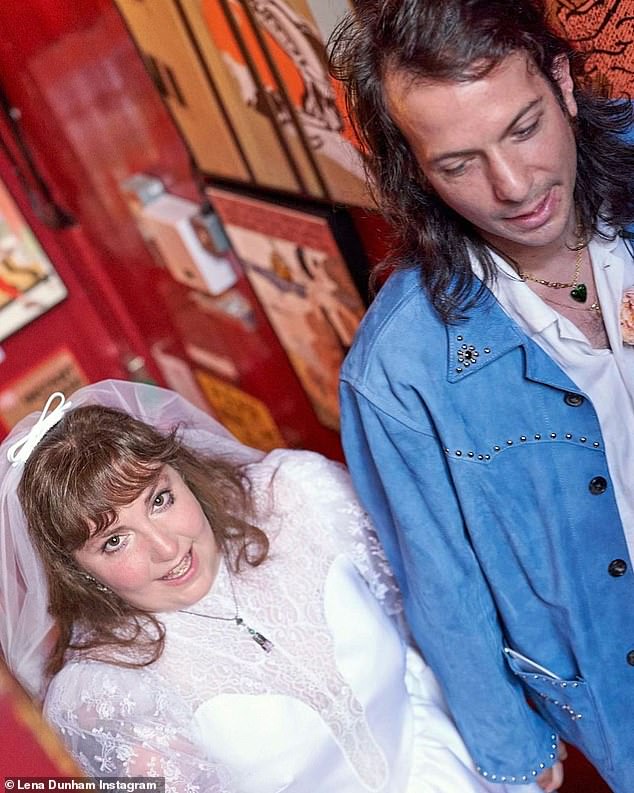 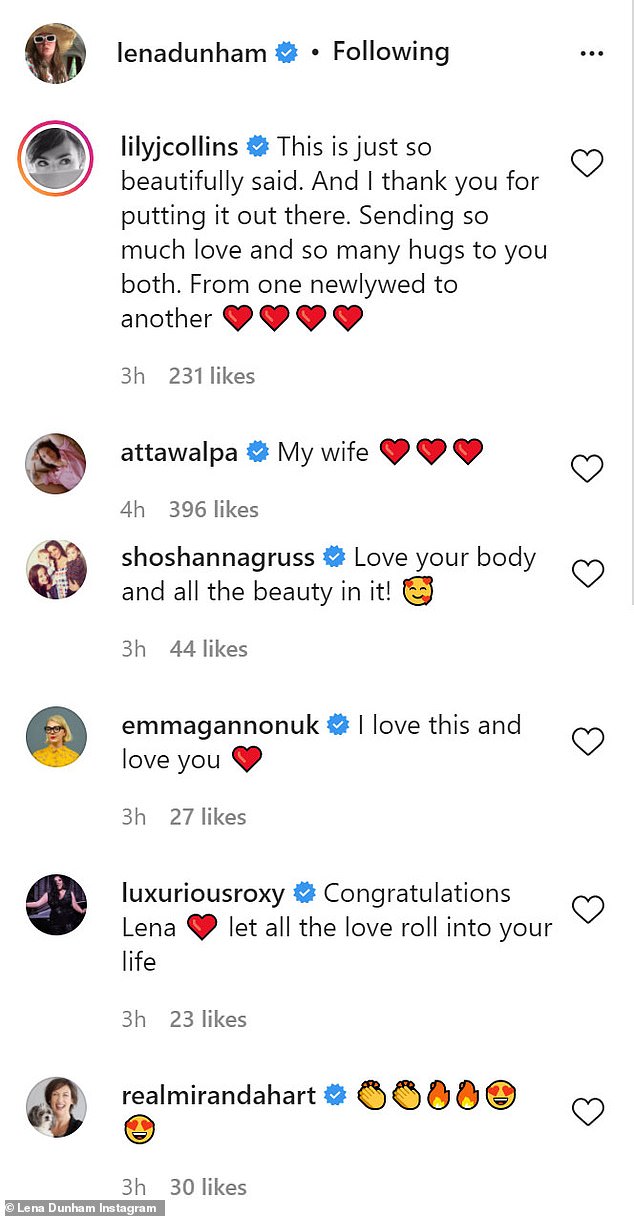 Outpouring: The actress was flooded with celeb support after her post

‘But lastly, when will we learn to stop equating thinness with health/happiness? Of course weight loss can be the result of positive change in habits, but guess what? So can weight gain.’

She then explained that some of the images she is being compared to from before, are from a time when she was in ‘active addiction with undiagnosed illness.’

‘In the 4 years since I’ve gotten sober and begun my life as someone who aspires toward health and not just achievement. These changes have allowed me to be the kind of sister/friend/daughter that I want to be and yes- meet my husband (who, by the way, doesn’t recognize me in those old photos because he sees how dimmed my light was.)’

‘I say this for any other person whose appearance has been changed with time, illness or circumstance-it’s okay to live in your present body without treating it as transitional. I am, and I’m really enjoying it. Love you all.’ 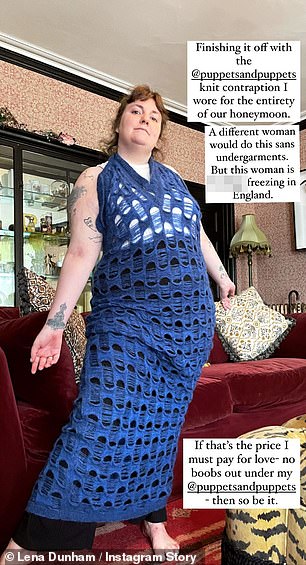 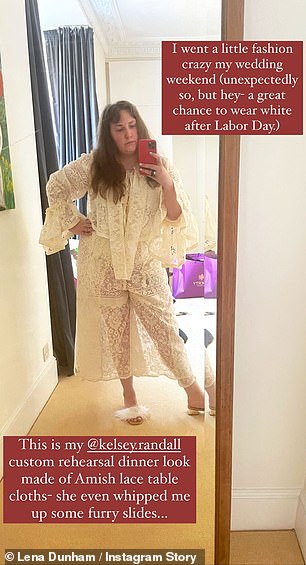 Honeymoon look: For the honeymoon in Somerset, England she confessed to living in a blue knit dress from Puppets and Puppets which she wore with undergarments due to the cold temperatures 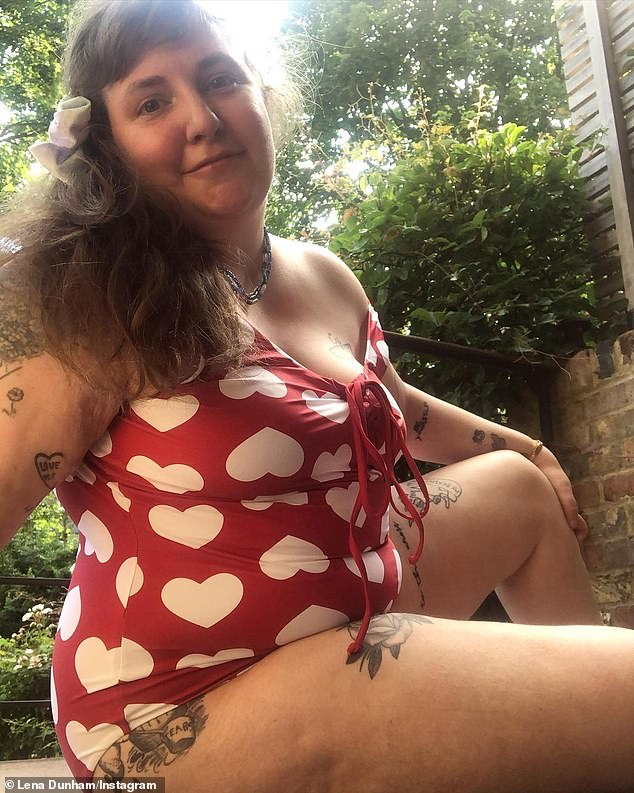 Happy: The star has commented on the negative reaction of her sharing her weight can ‘since she was last seen on television’ 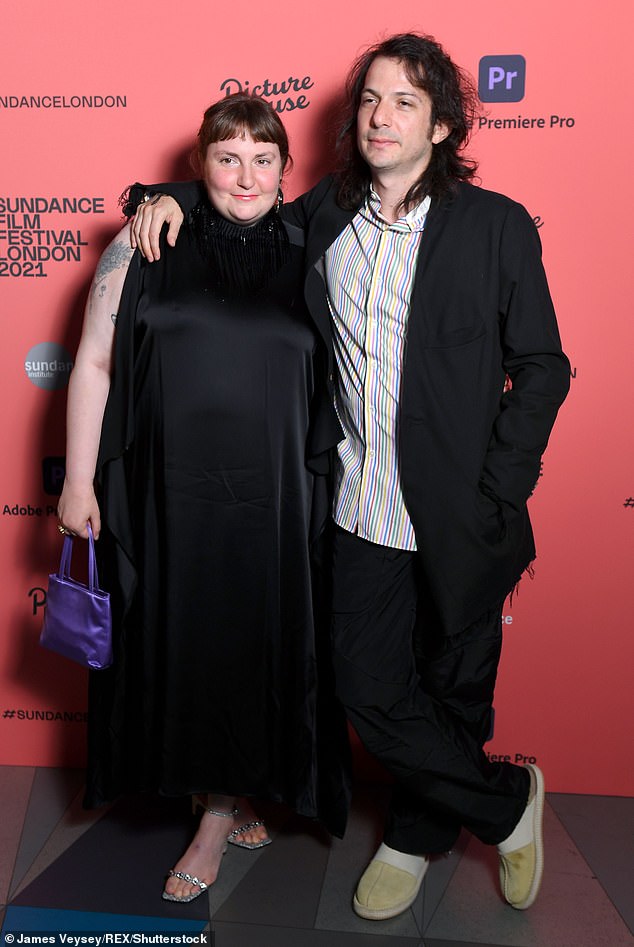 Safety: In order to ensure everyone’s safety, all 60 guests had to present proof of vaccination and undergo two lateral flow tests at the couple’s intimate affair

Last year, Dunham got candid with fans about her body struggles as she posted a snap of her ‘pot belly’ saying: ‘You know I’ve been thinking a lot about my pot belly in quarantine – especially as I notice an unusual amount of articles with titles like “How I Lost the Weight” and “Diet is Everything.”‘

‘Growing up chubby, fat, thicc, whatever you wanna call it – I always felt my body was a sign that read “I’m lazy and I have done less”‘ wrote Dunham. ‘Like if I just found the will to invest 30 per cent more I could be okay.’

‘Over the years, as my body guided me through my career and illness and disability, I started to appreciate what it was capable of.

She added: ‘But somehow, this pandemic time has brought back some of those old feelings of self-loathing and I think it all comes back to that damned to-do list, the one that started when we went into lockdown.’

The Girls star has also been open about her health struggles, having revealed that she had a hysterectomy at 31, due to the intolerable pain from endometriosis.