The ringleaders of a drugs gang who planned to assassinate their bosses after falling into debt have been jailed for life.

Leo Ellis, 24, and Jason Caswell, 41, bought a TEC-9 style automatic weapon capable of firing 900 bullets per minute in a plot to kill drug suppliers after being unable to pay them following police seizures.

In a succession of major raids in 2015-16, Sussex Police seized heroin and cocaine worth an estimated £1.4million, leaving the gang £850K in debt with other dealers.

Their debts worsened after a further £100,000 in cash was seized from Ellis and Caswell, who were convicted of conspiracy to murder and sentenced to life in prison at Hove Crown Court on Friday.

Leo Ellis, 24, and Jason Caswell, 41, have been jailed for life for heading a major drugs gang who plotted to murder their rivals after being unable to pay their debts

These are some of the drugs seized by police. The seizures included heroin and cocaine worth an estimated £1.4million, leaving the gang £850K in debt with other dealers

Ellis, from Hastings, East Sussex, and Caswell, from Rotherhithe, south east London, were among 16 people convicted in the investigation.

The dealers sold drugs across East Sussex and Kent before buying a TEC-9 style 9mm automatic submachine gun pistol with a silencer to take out their suppliers.

Sussex Police worked with the National Crime Agency and examined texts, emails and the movements of the gang.

In the conversations, the duo boasted of having acquired guns and ammunition from Eastern Europe.

In another, Ellis discusses with Caswell plans to recruit someone to carry out the killings.

Five other men were also sentenced for their involvement with the gang.

Scott Gardner, 40, of Bexhill Road, St Leonards, was sentenced to 12 months having pleaded guilty to money laundering before the start of the trial. 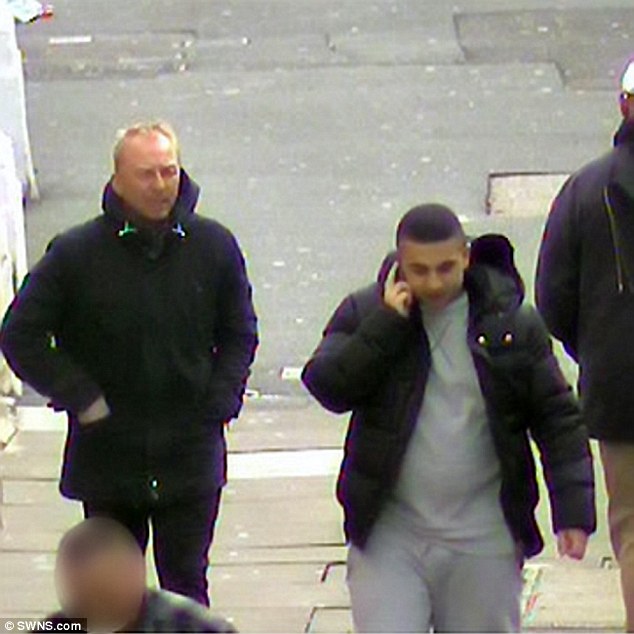 Ellis, from Hastings, East Sussex, and Caswell, from Rotherhithe, were caught together on CCTV 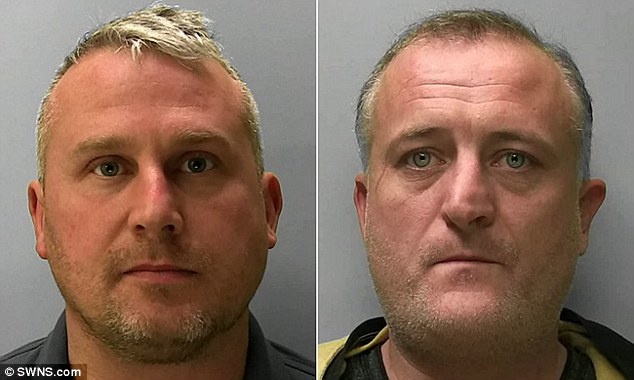 Wesley Long, 40, of Harold Road, Hastings, was jailed for three years having admitted conspiracy to supply cocaine, again before the trial.

Simon Grant, 45, of Sherriff Road, London, had earlier pleaded guilty to possession of cannabis with intent to supply and was sentenced to five months suspended for 18 months.

James Dunham, 37, of Roundhouse Cresent, Peacehaven, did not appear at court and will be sentenced at a later date for conspiracy to supply cocaine.

Anthony Hearn was sentenced in July 2016 to 11 years in prison after admitting possessing the sub-machine gun.

Officers were able to track movements through surveillance and halt the duo before any murders could take place.

DCI Andy Bennett added: ‘This has been a major operation for my team, working with the close co-operation and support of the National Crime Agency throughout, for which we are extremely grateful.

‘It shows the determination of law enforcement at both national and force level to work successfully together, in order to effectively tackle organised crime to protect the public from dangerous criminals such as these.

‘The operation was the culminating phase of a major enquiry, and another example of the way in which, working with our law enforcement partners, we are constantly attacking organised crime and frustrating its efforts to become embedded in our communities.

‘The devastating effect of drug misuse can have a much wider impact than simply on the person who takes them.

It can corrode the quality of life for local communities and affect the health of those who are drawn into it.

‘It is vital that we continue to receive support from our communities so that we can effectively tackle crime, and take weapons like this off our streets.’