A lesbian couple in Stoke-on-Trent have been left horrified after two homophobic messages were left on their front door.

The couple found one hand-written letter outside their house in Fenton and were even more shocked to discover a second homophobic rant posted three days later.

The first sent on May 7 read: ‘Everyone knows you are gay and we don’t want you living here so you better leave soon otherwise….’

A couple in Stoke were subjected to vile messages, pictured is the first not left on May 7

Police have now launched an investigation into the hate crime. Writing about her ordeal on Facebook, the woman said: ‘You hear about homophobia in the world but I’ve personally never experienced any. I was quite shocked to have received this.’

On receiving the second note, she explained the police had now got involved – and appealed for her neighbours in Hollings Street, Berdmore Street and Brocksford Street to get in touch.

She added: ‘It’s not very nice knowing people have watched us and then gone out their way to do this.’

Officers have also launched an appeal for witnesses. A Staffordshire Police spokesman said: ‘Police were contacted at 10.20am on Monday to a report of a hate crime. ‘A note was left outside of a property on Berdmore Street in Stoke-on-Trent. Any witnesses or anyone with information is asked to contact us.’

Residents have now spoken out in support of the couple after the notes were shared on social media.

One Facebook user suggested the note had been deliberately written in child-like writing, while another suggested they had used their non-dominant hand.

One woman said: ‘This is really horrible. It looks like a kid’s writing but you never know if it’s someone trying to disguise their writing or who else could be involved. It’s disgusting that this happens and you need to make sure you and yours are safe.’

Another added: ‘How horrible. I bet the majority of your street would be ashamed to know someone had done this. People can be so downright nasty.

‘This person has either purposefully disguised their handwriting to look like a child’s or they are simply illiterate and would be very easily distinguished by their attempted scrawl.’ 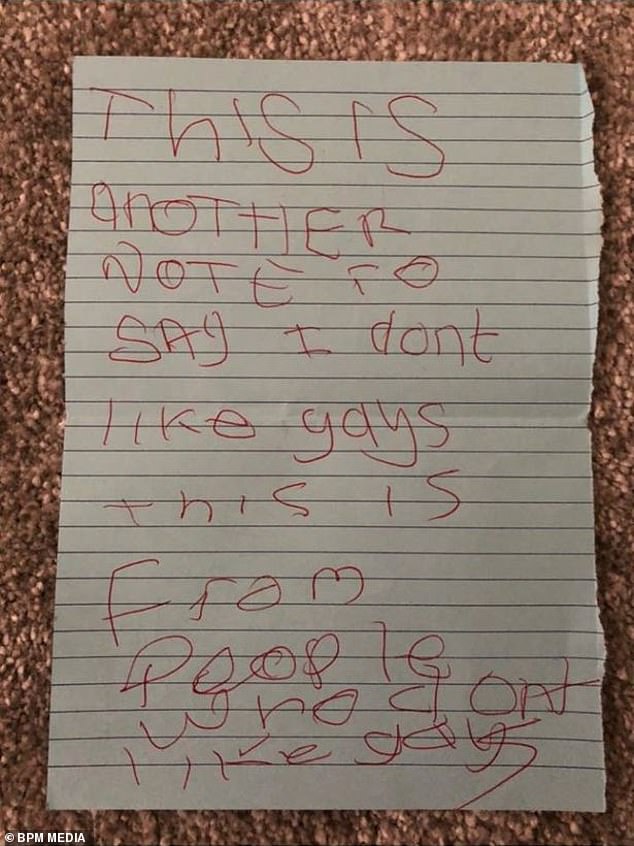 Others suggested installing CCTV to catch the culprit in the act. One woman said: ‘How can anybody be so childish and narrow minded? There is absolutely nothing wrong with being gay. I’m straight, but I would prefer to be gay than childish. Look at the pathetic writing.

‘My five-year-old granddaughter can write much better than that. It may be worth you buying one of those motion sensor video door bells.’

And another said: ‘This is absolutely disgusting and these scumbags need finding and prosecuting. I’m so sorry this has happened to you. I know it’s hard but try to ignore it and if anything else happens no matter how small contact the police.’

One woman said she felt ashamed to have family living in the area. She added: ‘That’s absolutely disgusting. I can honest say I am ashamed that this could be written by one of our neighbours. You certainly are more than welcome in our community ignore the small minded idiots.’

Another neighbour said: ‘Put up a camera and shame the horrible creature for what they are. ‘It shouldn’t matter if someone is gay or any other sexuality. We are all made the same, we breathe the same air, we bleed the same.’

And a third wrote: ‘Times are hard enough at present without you having to deal with this. Keep the police updated but try to not let this play on your mind too much. These idiots need to get in their time machine and go back to the 1950s.’

Any witnesses or anyone with information is asked to contact Staffordshire Police on 101 or via social media, quoting incident number 144 of May 11.