It really is difficult to regain your fitness after having a baby! Less than a THIRD of women return to their pre-pregnancy exercise levels one year after giving birth, study finds

From Kim Kardashian to Victoria Beckham, many celebrities make it look easy to get back in shape after giving birth.

But a new study has confirmed what many women have known for years – it really is difficult to regain your fitness after having a baby.

Researchers from Martin Army Community Hospital in Georgia looked at how quickly female soldiers regained their fitness after giving birth.

Their findings showed that despite being very fit before getting pregnant, just 30 per cent of the women had returned to their pre-pregnancy fitness levels one year after giving birth.

The three PFT events are:

In the study, the researchers looked at the fitness levels of 460 women who became pregnant while in the military.

The participants all had high levels of fitness as a requirement of being a soldier, and continued a modified training regime during pregnancy.

Most of the women also returned to regular training by 12 weeks after giving birth.

Despite being very fit before they became pregnant, one year after giving birth, only 30 per cent of the participants were able to obtain the same score as they had pre-pregnancy in the US Army Physical Fitness Test (APFT).

In their study, published in PLOS One, the researchers, led by Dr David DeGroot explained: ‘The APFT consists of three events: the push-up, the sit-up and the 2 mile run.

‘These events test the muscular and aerobic endurance of the soldier.’

Three years after delivery, 75 per cent of the women could match their pre-pregnancy score in the test.

In particular, participants were found to struggle with sit-ups after giving birth – likely due to the fact that abdominal muscles are weaker following pregnancy.

The researchers wrote: ‘We demonstrated a lower rate of failure on the push-up event postpartum as compared to the sit-up or run.

‘Based on these results it appears that chest, shoulder and upper arm strength is less likely to be adversely affected by pregnancy than is the core abdominal musculature.’ 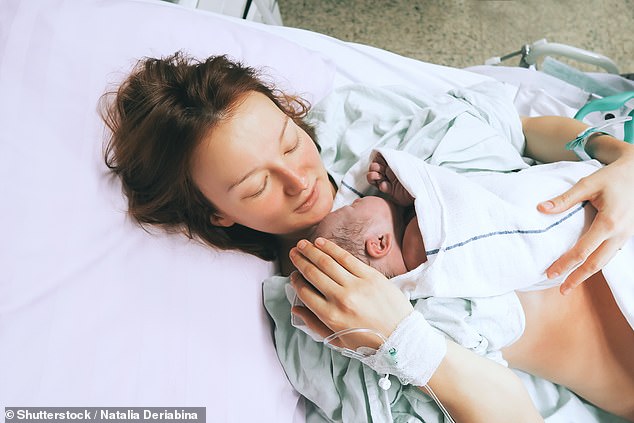 The NHS advises that women wait at least six weeks after birth before starting any high-impact exercise, such as aerobics or running (stock image)

The NHS advises that women wait at least six weeks after birth before starting any high-impact exercise, such as aerobics or running.

It said: ‘Your lower back and core abdominal muscles may be weaker than they used to be.

‘Your ligaments and joints are also more supple and flexible for a few months after birth, so there’s an increased risk of injury if you stretch or twist too much.’