Letters sent by Princess Diana to the friend of an AIDS victim who she gave £580 to have been made public.

Correspondence between Princess Diana and a friend of Vincent Hickey show the kind-hearted spirit of the ‘People’s Princess’ to those less fortunate than herself.

In July 1996, Margaret Bendon got in touch with Diana on behalf of Mr Hickey, who had AIDS and bowel cancer, to ask for money for a visit to Loudres, France.

Diana’s personal assistant wrote back to Ms Bendon, saying the Princess would consider the request.

Then six days later, a second letter was sent by the Princess with an enclosed cheque.

Diana then sent back a third letter, saying she was happy the money she sent had gone to good use after being informed Mr Hickey and Ms Bendon had traveled to Loudres.

Princess Diana had sent a personal letter to Miss Margaret Bendon, who was the friends of AIDS sufferer Vincent Hickey

She explained that her mind had been put at ease after she received a letter detailing her generous donation went to a genuine cause.

She wrote: ‘…you need not have worried about proving your request was genuine!

‘I was delighted to be able to help and so glad that he (Vincent) was well enough to travel.

‘I am sure that the benefit from such an experience goes a very long way to bring this comfort and to be able to play a part in providing it has given me great pleasure.’

The Coutts & Co cheque shows the sum was paid from the account of ‘His Royal Highness The Prince of Wales Office’. 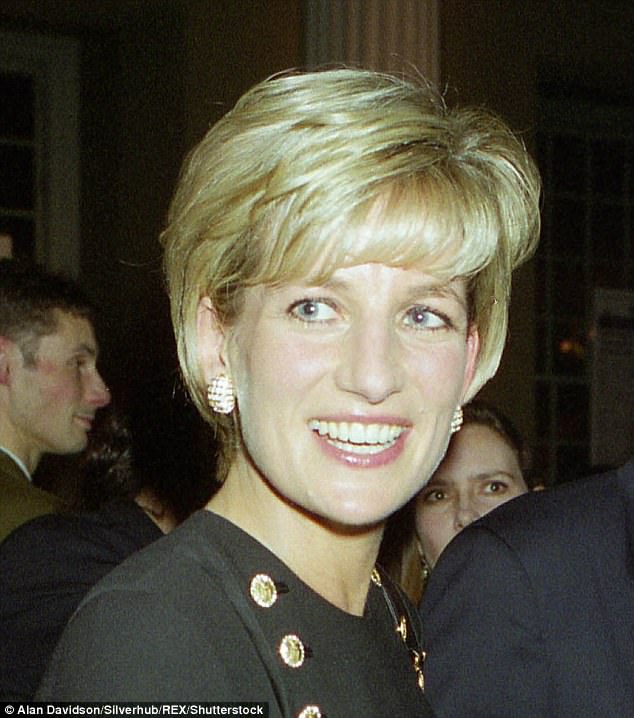 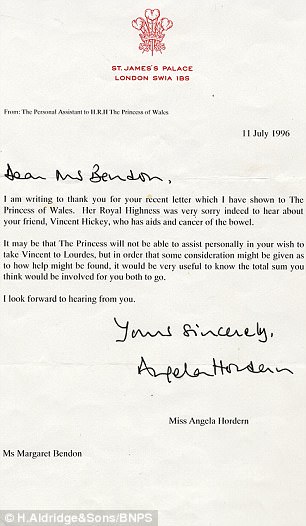 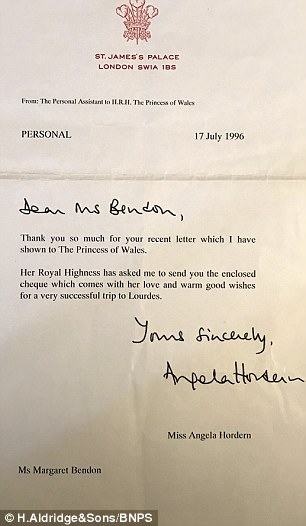 Diana helped to raise the profile of AIDS victims worldwide, and hellped to open the UK’s first purpose built HIV/AIDS unit in London.

The People’s Princess also broke taboos surrounding the illness by shaking hands and hugging victims of the disease.

The letters on Kensington Palace headed paper, have now been put up for auction by a collector of 20th century autographs.

They are being sold by Henry Aldridge and Son of Devizes, Wilts, for an estimated £3,000.

Auctioneer Andrew Aldridge said: ‘These include the finest content letters of Lady Diana known to exist.

‘They demonstrate the empathy and generosity Diana was able to show to some of the most vulnerable people in society.’

The letters are being sold on February 24.