President Trump’s ex-campaign manager Corey Lewandowski hinted that a magazine reporter, who admitted that she walked into his unlocked house, stole a photo album on her way out.

‘I haven’t seen my photo album that was in the foyer prior to this incident. Wonder where it could be,’ Lewandowski tweeted on Thursday.

The aim of Lewandowski’s ire was New York Magazine’s Washington Correspondent Olivia Nuzzi, whose recent story on outgoing White House Communications Director Hope Hicks depicted Lewandowski on the magazine’s cover as being ‘out for blood.’ 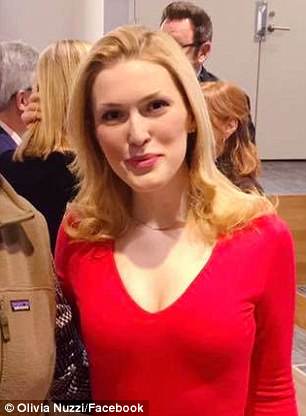 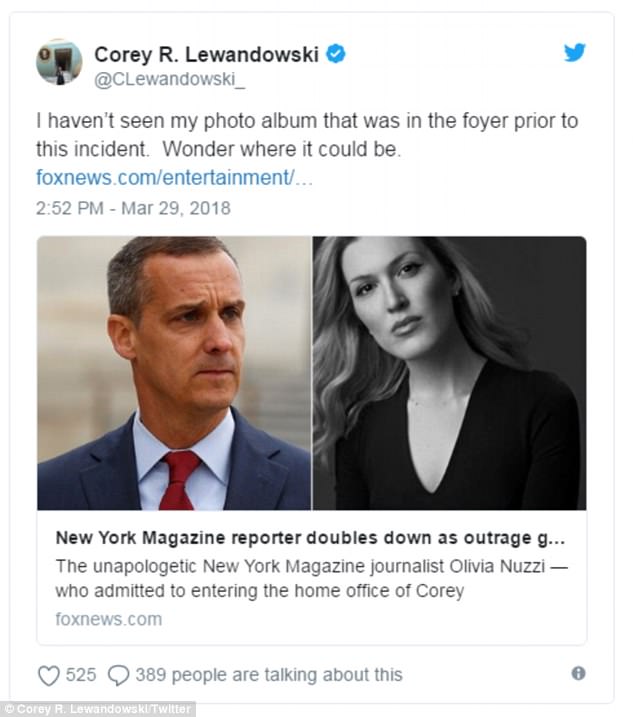 On Thursday, Corey Lewandowski tweeted a Fox News story about Olivia Nuzzi admitting that she entered his residence adding, ‘I haven’t seen my photo album that was in the foyer prior to this incident. Wonder where it could be?’

In his tweet, Lewandowski included a link to a Fox News story that slams Nuzzi for admitting that she briefly walked into the ex-Trump aide’s D.C. digs and took a look around.

Nuzzi was forthright about what happened in an interview with Columbia Journalism Review.

‘I tried to knock on the basement door, but the gate wasn’t open. Then I walked up the steps to the main door and knocked for, like, 10 minutes. And I’m knocking, knocking, nobody’s answering,’ Nuzzi told CJR. ‘But after a while, I just touched the door knob, and the door was open. I walked in and I’m in the house, by myself.’

In the story she describes the ornate wall hanging in the entryway of the townhouse, which serves as Lewandowski’s residence, but also the office of Turnberry Solutions, a lobbying firm that Lewandowski says he has no involvement with, but employs members of his former lobbying firm. 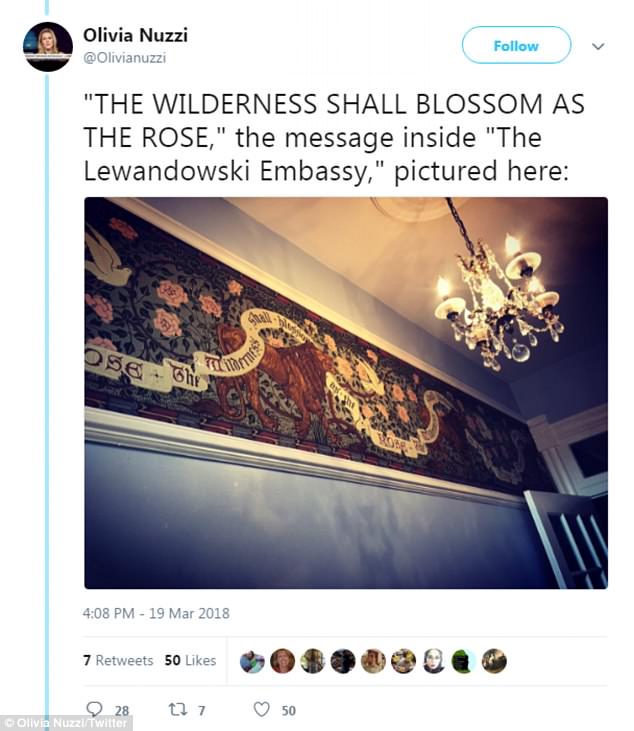 In her story for New York Magazine, Olivia Nuzzi describes the ornate wall hanging found just inside the townhome where Corey Lewandowski lives. In an interview with Columbia Journalism Review, Nuzzi cops to taking a picture of it upon entering the building by herself 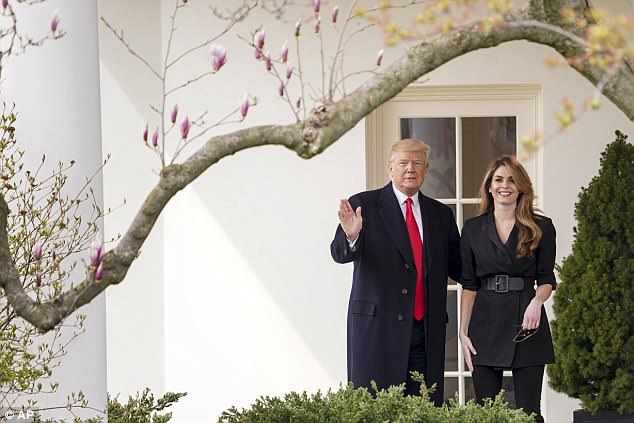 Olivia Nuzzi told the story of how she entered Corey Lewandowski’s residence to Columbia Journalism Review, in an interview detailing how she reported out her profile on departing White House Communications Director Hope Hicks (right)

‘Lions, light-pink roses, and a phrase from Isaiah 35, repeated three times, decorate the corridor leading past the entrance: THE WILDERNESS SHALL BLOSSOM AS THE ROSE,’ Nuzzi described. 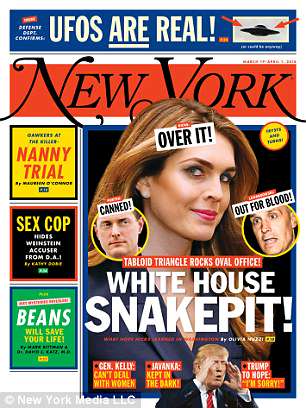 Olivia Nuzzi penned a cover story about outgoing White House Communications Director Hope Hicks, with the cover reading that Corey Lewandowski was ‘out for blood!’

To CJR she said, ‘So I took this photo of the quote on a wall. I peered around but I didn’t walk fully into the house.’

Nuzzi said she also texted her boyfriend and asked him about the legality of what she had just done.

Nuzzi said eventually Jason Osbourne, who works at Turnberry Solutions, opened the door and reluctantly gave her a tour.

‘He offered me a Coke,’ she said. ‘I did not tell him that I had already been inside.’

On Monday, Lewandowski told Fox News that Nuzzi didn’t have permission to go inside the building.

‘I can confirm I did not grant her permission to enter my office,’ Lewandowski said.

He also told the network that he was considering legal action.

‘That decision has not been finalized yet,’ Trump’s former campaign manager added.

Lewandowski was one of the central characters in Nuzzi’s opus on Hope Hicks. 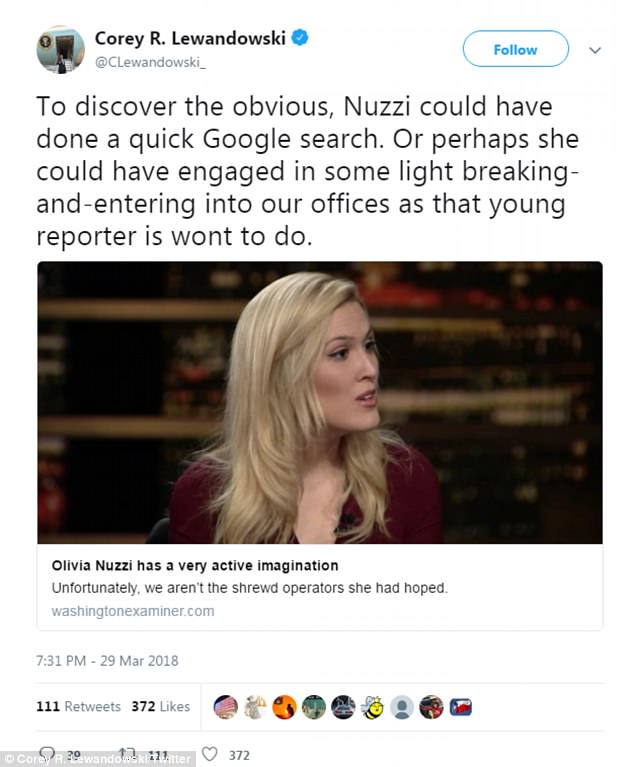 Corey Lewandowski tweeted about Olivia Nuzzi again Thursday night, criticizing another story she wrote and saying it could have been improved by her engaging in some ‘light breaking-and-entering’

The story suggested that Lewandowski – who Nuzzi reported had encouraged rumors that he had had an affair with Hicks – was upset when he heard that she had decided to date Rob Porter, the president’s former staff secretary who resigned after spousal abuse allegations were reported on DailyMail.com.

‘He got wind that she was dating Porter, and he could not handle that,’ one of Nuzzi’s sources said. ‘There were still raw feelings.’

Six days after the Columbia Journalism Review piece ran, Lewandowski wasn’t over Nuzzi’s revelation that she entered his premises.

In a second Thursday tweet, referring to another story Nuzzi penned about who might be Hicks’ replacement, Lewandowski suggests the writer ‘could have engaged in some light breaking-and-entering into our offices’ to paint a more accurate picture.

Nuzzi did not respond to DailyMail.com’s request for comment on Lewandowski’s accusations.

‘We stand by Olivia’s reporting methods and don’t believe she did anything wrong,’ Starke added.