Lewis Burton and his new girlfriend Lottie Tomlinson were seen engaging in a tense conversation shortly after arriving on holiday in Ibiza on Thursday via LewHamilton’s private jet.

The couple, who initially denied they were dating, confirmed their rumoured romance by kissing one another outside, appeared to be having some cross words. 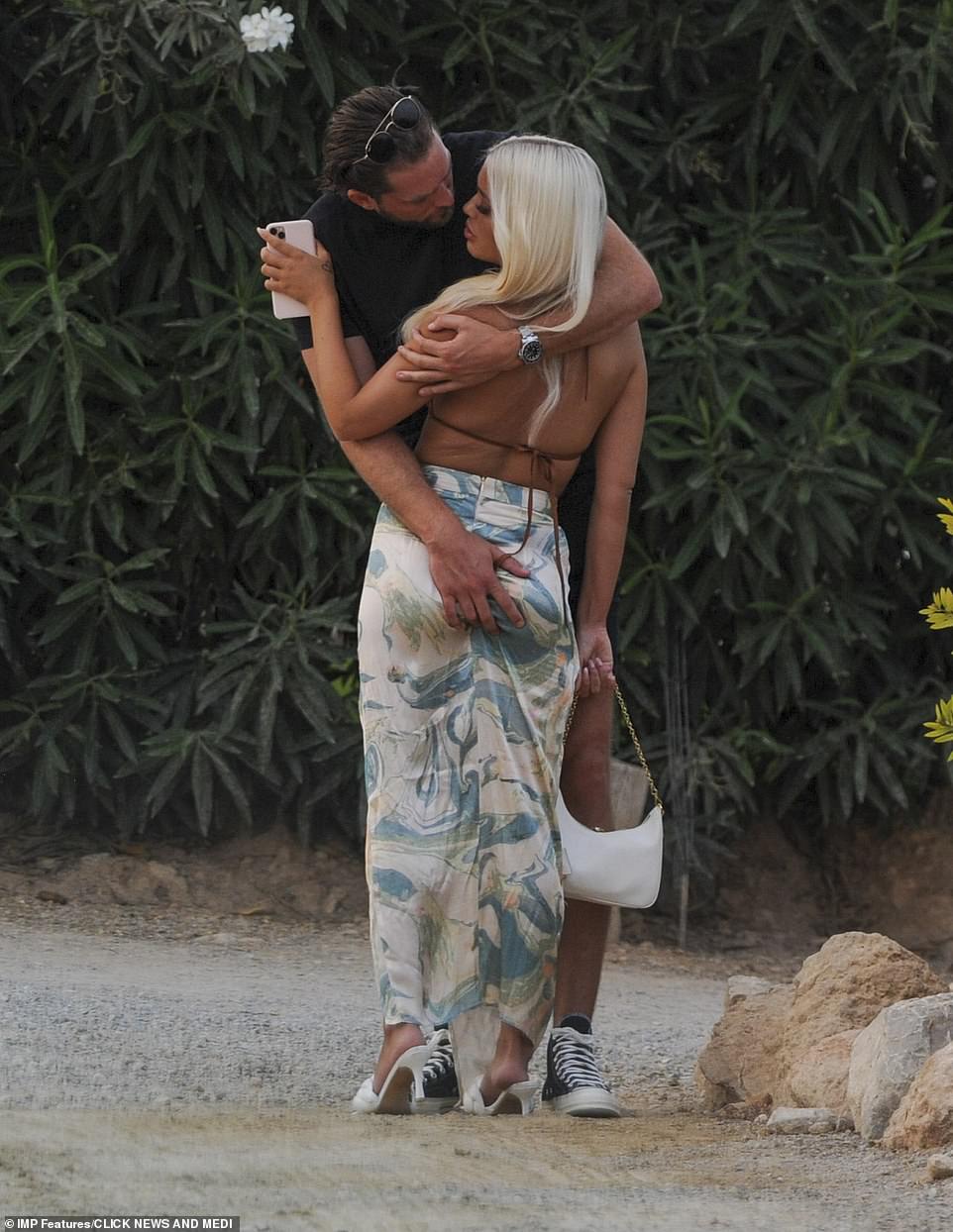 Pulling her closer: Lottie looked visibly annoyed as Lewis tried to leaned in to kiss her while squeezing her bottom after an apparent falling out

Lottie, 22, put on a frosty display with Lewis, 28, on their first trip away together, wearing a brown bikini top, a patterned maxi skirt and heeled mules.

As the tennis player pulled her in for a kiss, Lottie looked visibly annoyed and at points, appeared to pull away from him.

He then squeezed her bottom and pulled her closer as they locked lips. 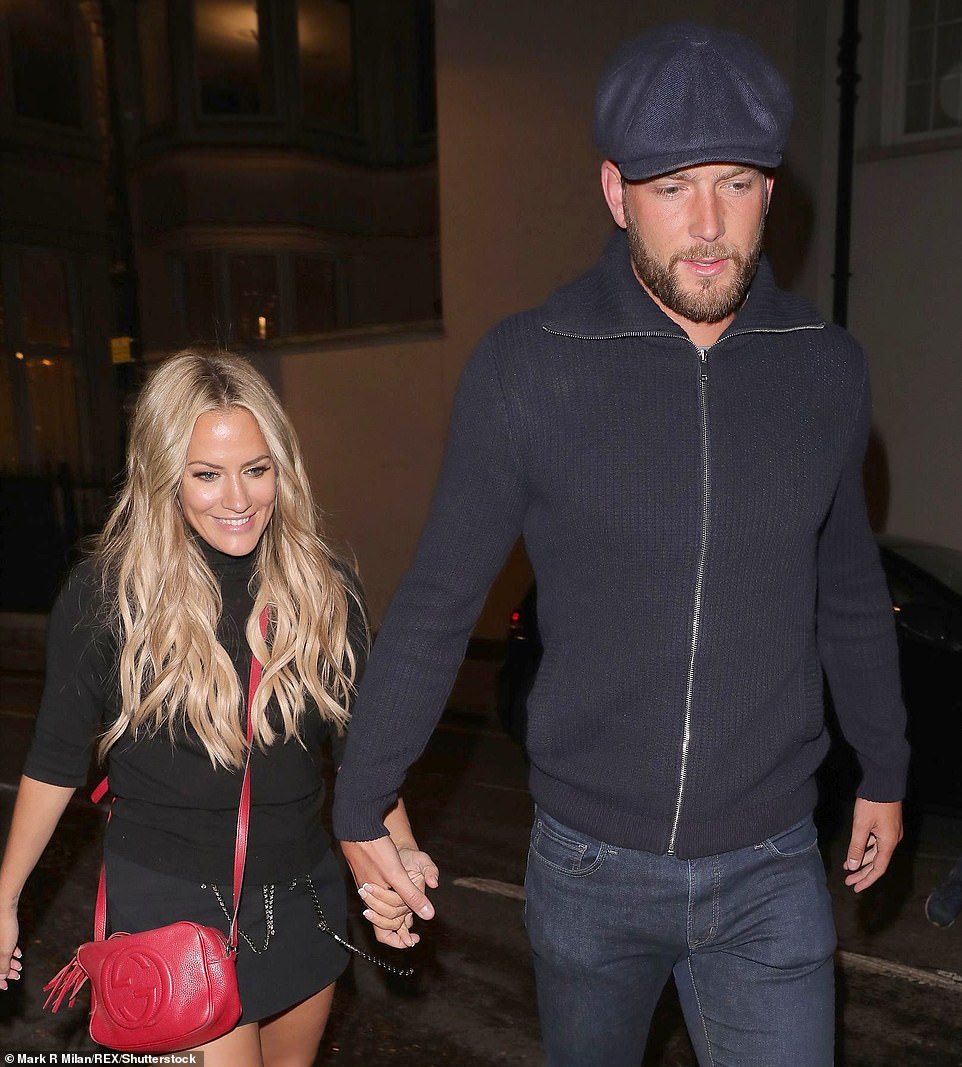 Tragic: Lewis’s late partner Caroline Flack was found dead on February 15, the day after she had learned the CPS was charging her with allegedly assaulting him (pictured in October 2019)

The couple then headed to an outdoor restaurant where things continued to look tense, with Lottie staring at her phone, while Lewis looked away.

Lottie and Lewis are said to have bonded over the grief of losing their respective loved ones.

She sadly lost her mother and sister in recent years and Lewis lost Caroline in February. 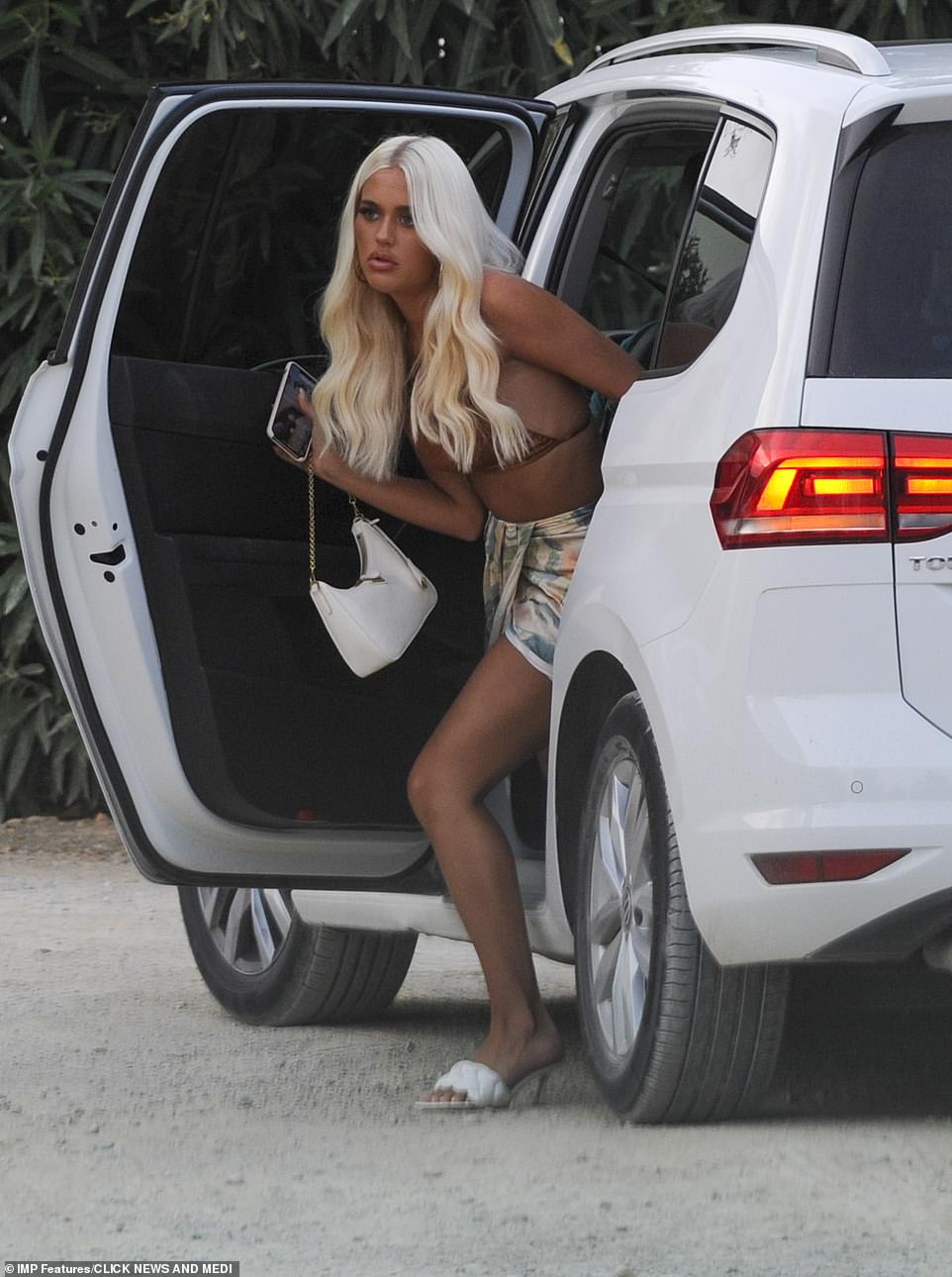 Troubled? Lottie failed to raise a smile as she arrived at the restaurant wearing a bikini top and patterned maxi skirt and white heeled mules 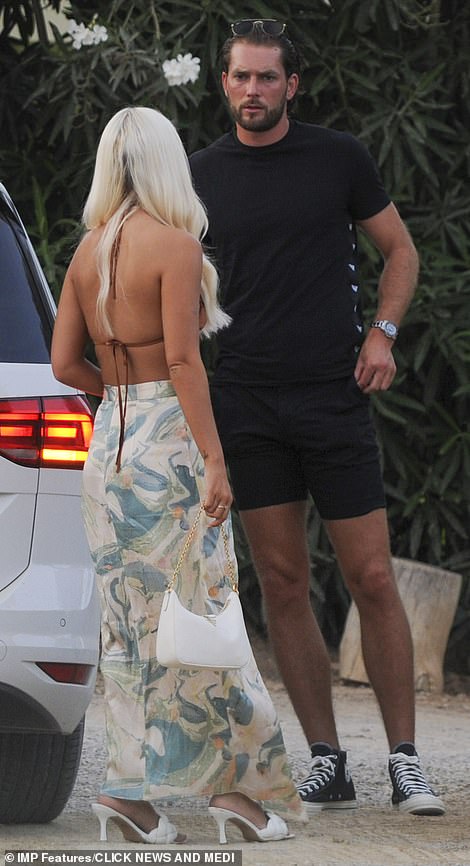 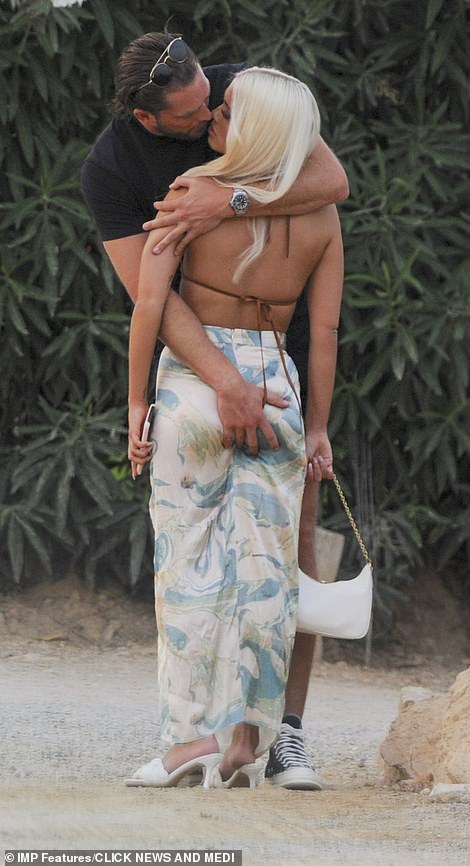 Something to say: Lewis walked around to her and seemed to want to patch things up 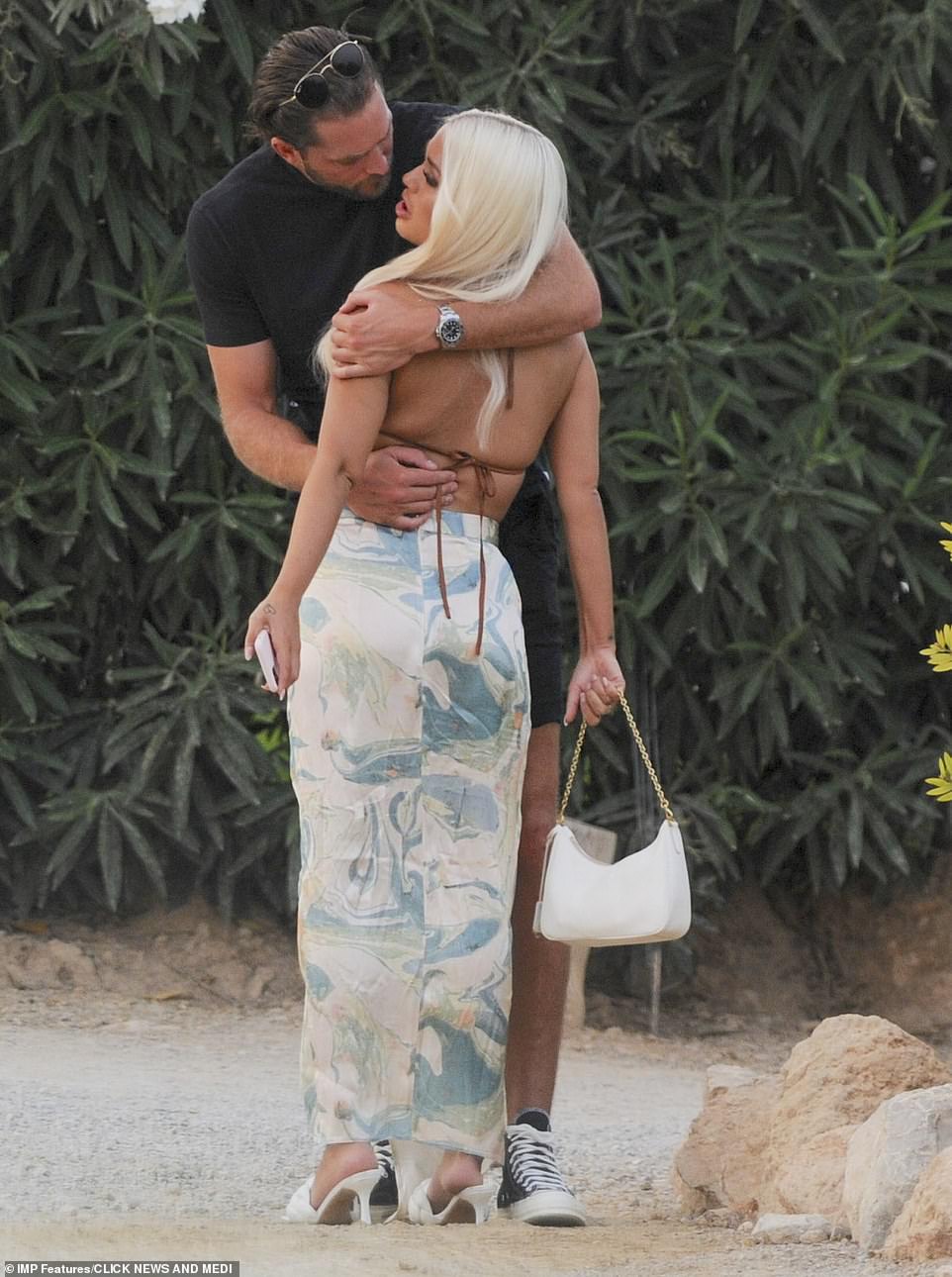 Cross: Lottie looked furious at first as she angled her head away from the tennis player 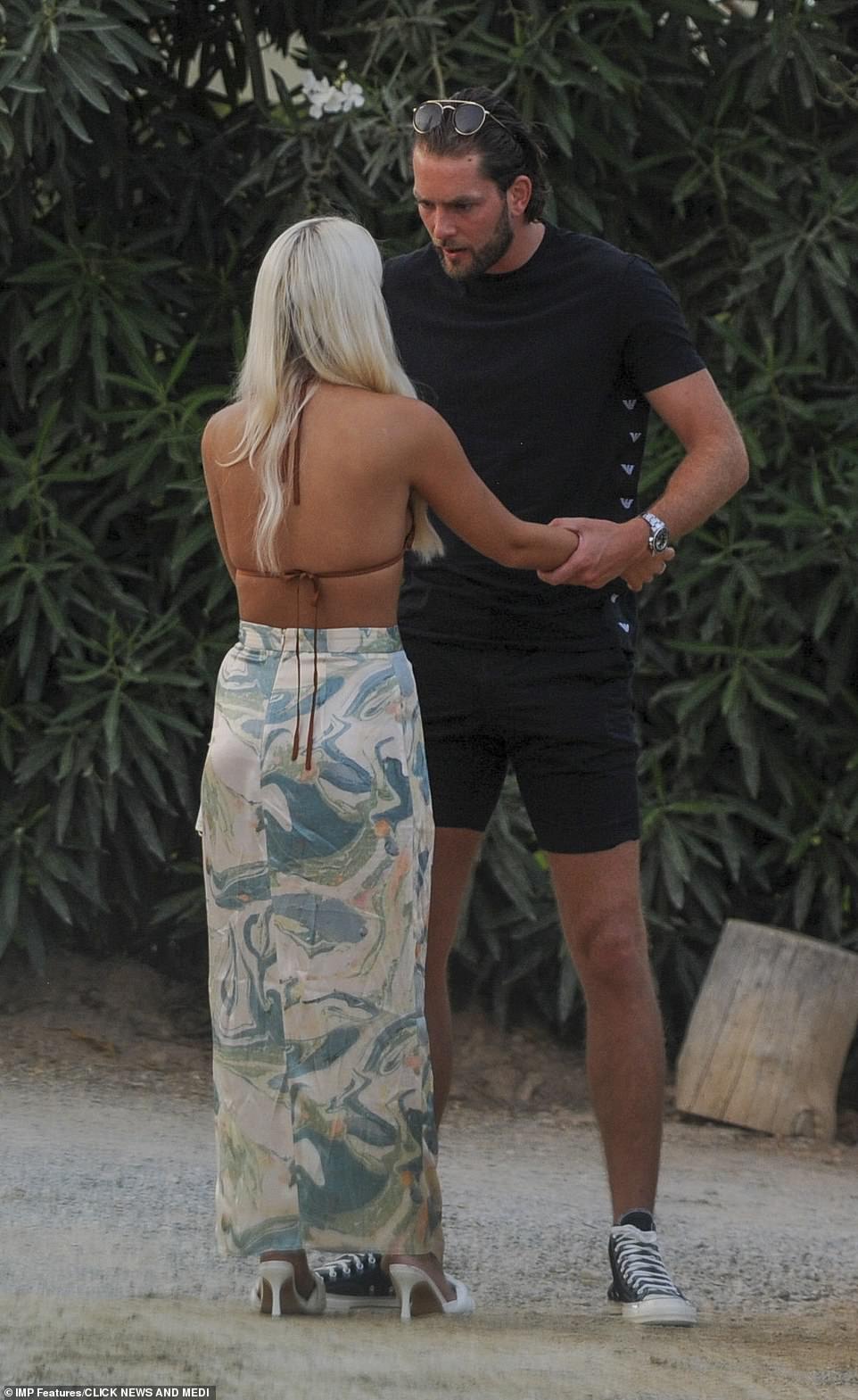 Sorting things out? Lewis looked pained as he held onto Lottie’s arms during their conversation

Lottie’s sister Félicité, 18, died after an accidental drug overdose, three years after the death of her mother Johannah, who died of cancer.

It’s understood Lottie became better acquainted with Lewis at a house party in May hosted by Caroline’s close friend Lou Teasdale, 36, which was held to mark three months since her tragic passing.

A source exclusively told MailOnline: ‘Lewis and Lottie have grown close after spending time together at a party at Lou’s house. 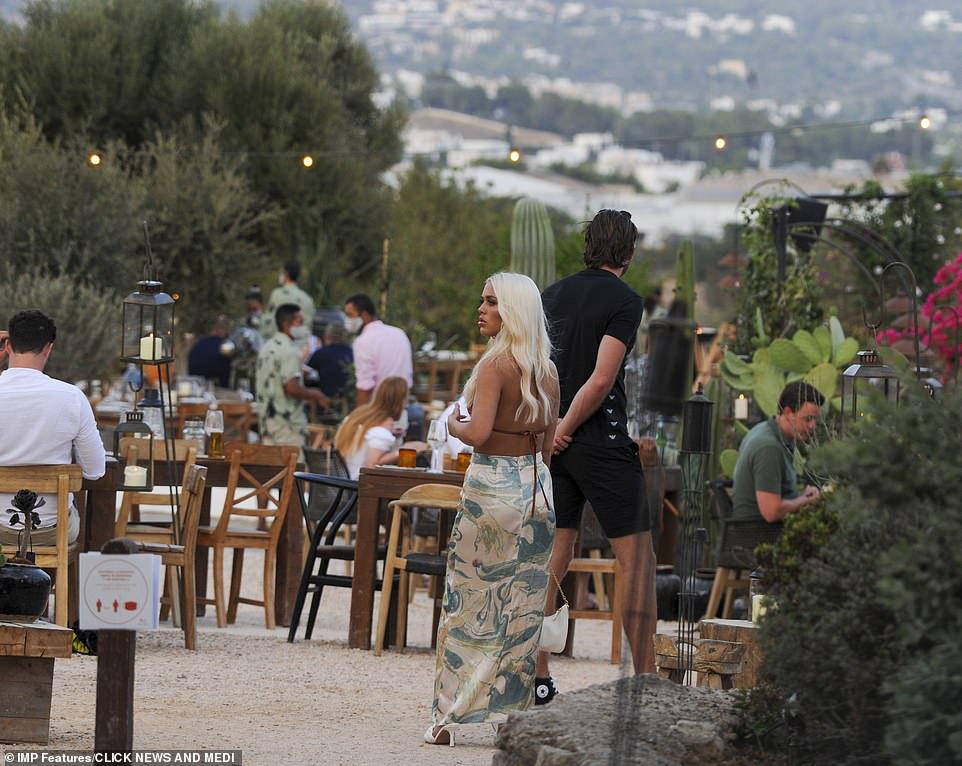 A source exclusively told MailOnline: ‘Lewis and Lottie have grown close after spending time together at a party at Lou’s house’ 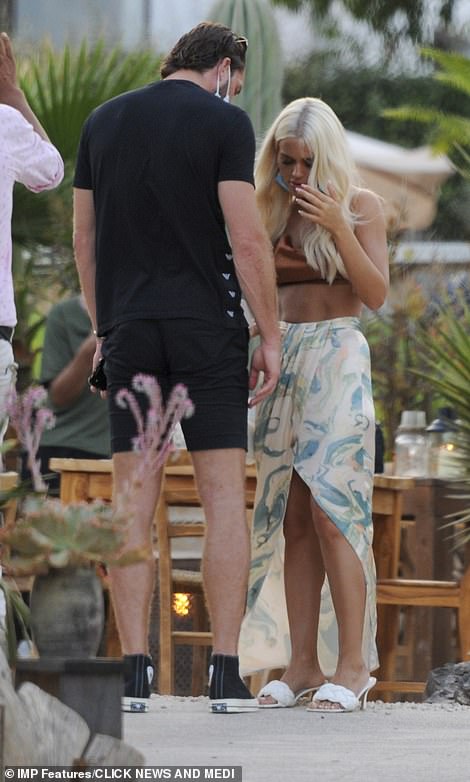 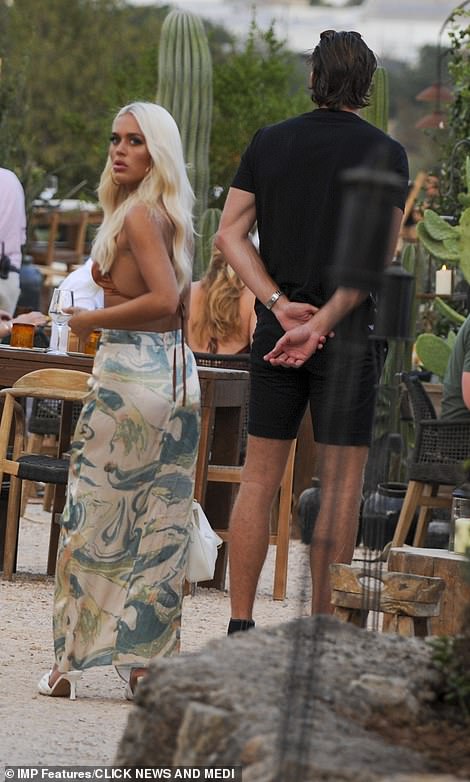 A moment: As Lottie and Lewis walked into the outdoor restaurant, she bowed her head as Lewis remained close to her 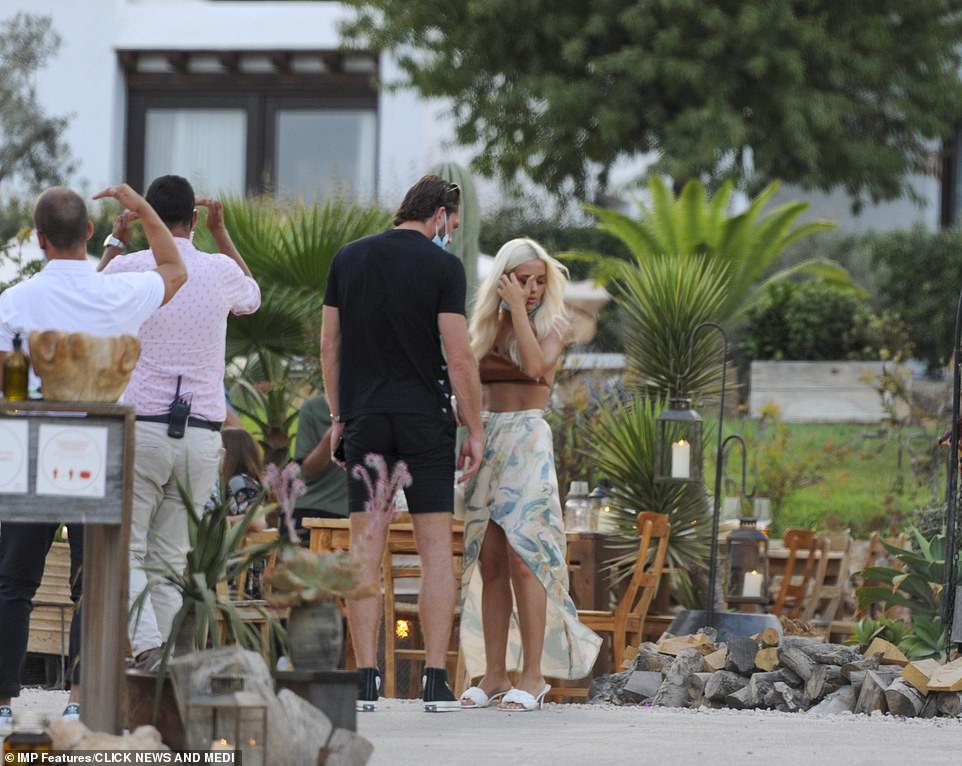 Upset: At one point, Lottie looked as though she was wiping a tear from her eye 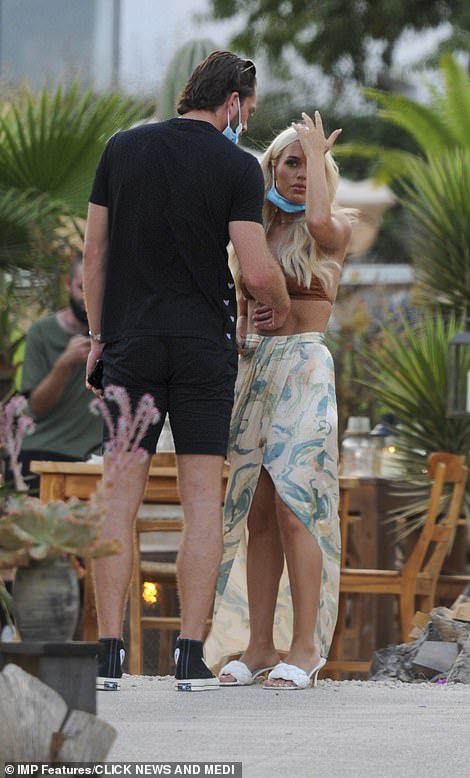 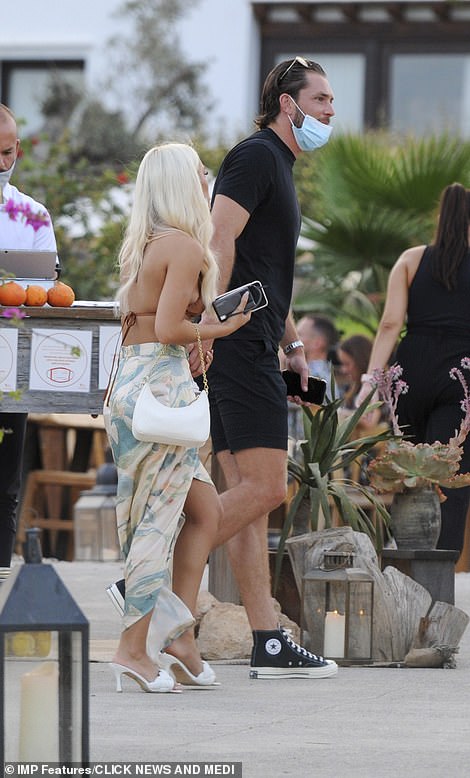 Exasperated: Lottie put her head in her hand as the conversation rumbled on 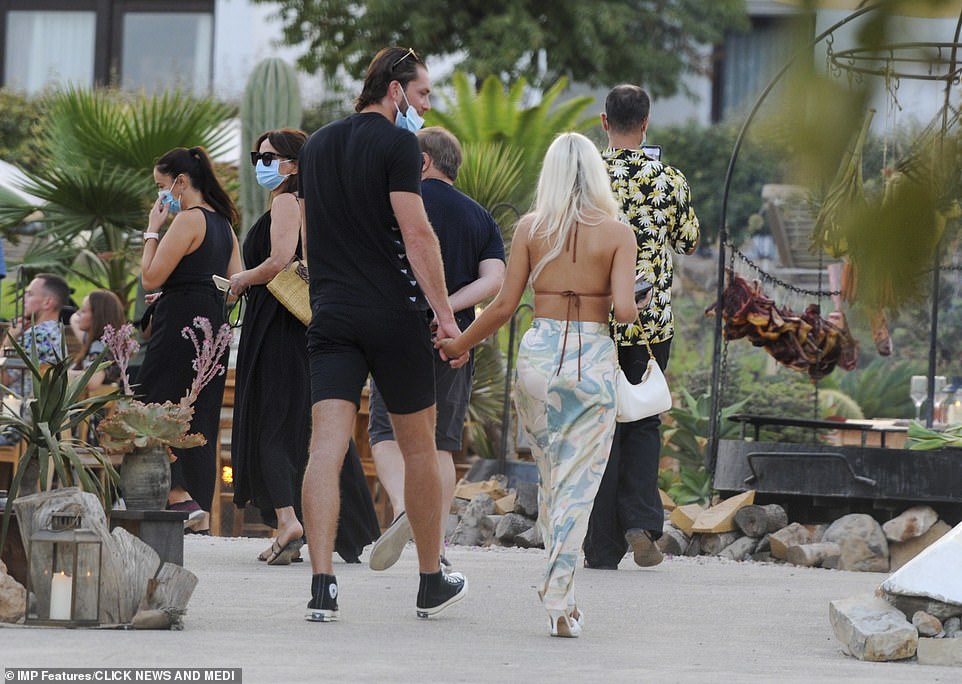 Not seeming to mind who saw them together, Lottie and Lewis held hands as they appeared to be back on track 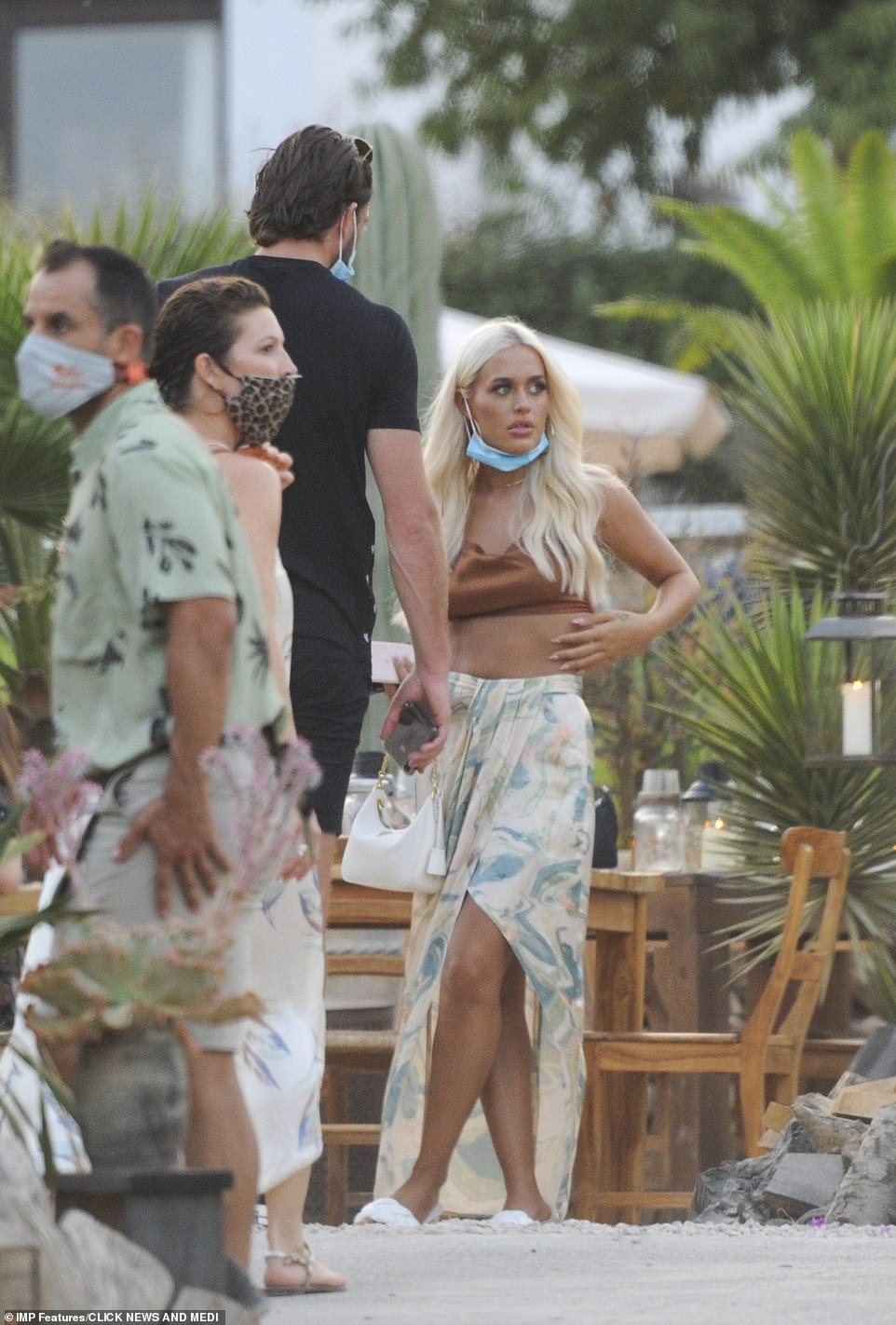 Not meeting his gaze: Lottie kept looking away from Lewis on what appeared to be their date night 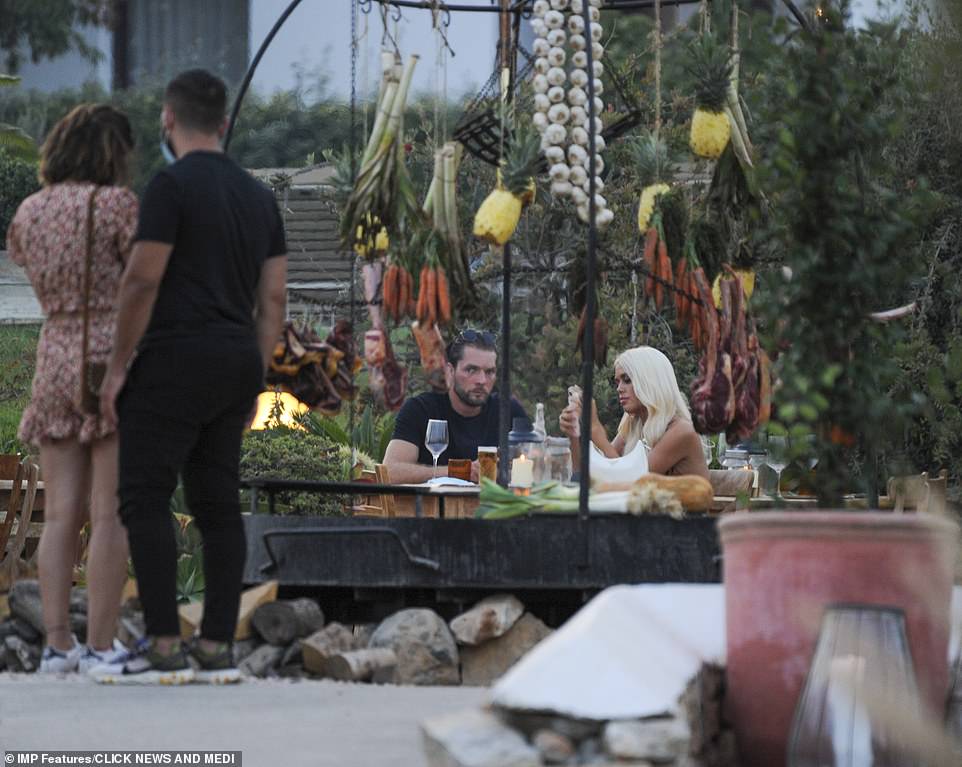 Still having problems? Lottie was glued to her phone while Lewis looked away while they were seated

‘They have been meeting up in secret for weeks but their newfound friendship hasn’t gone unnoticed by mutual pals.

‘Not all of Caroline’s friends are happy with how the situation appears to be developing but can understand that both Lottie and Lewis have been there for each other as a shoulder to cry on.’

Louis Tomlinson’s sister Lottie – who was known to be friends with Caroline through their links with The X Factor – recently posted a slew of sun-kissed swimwear snaps from her holiday to Mykonos, which Lewis liked on Instagram. 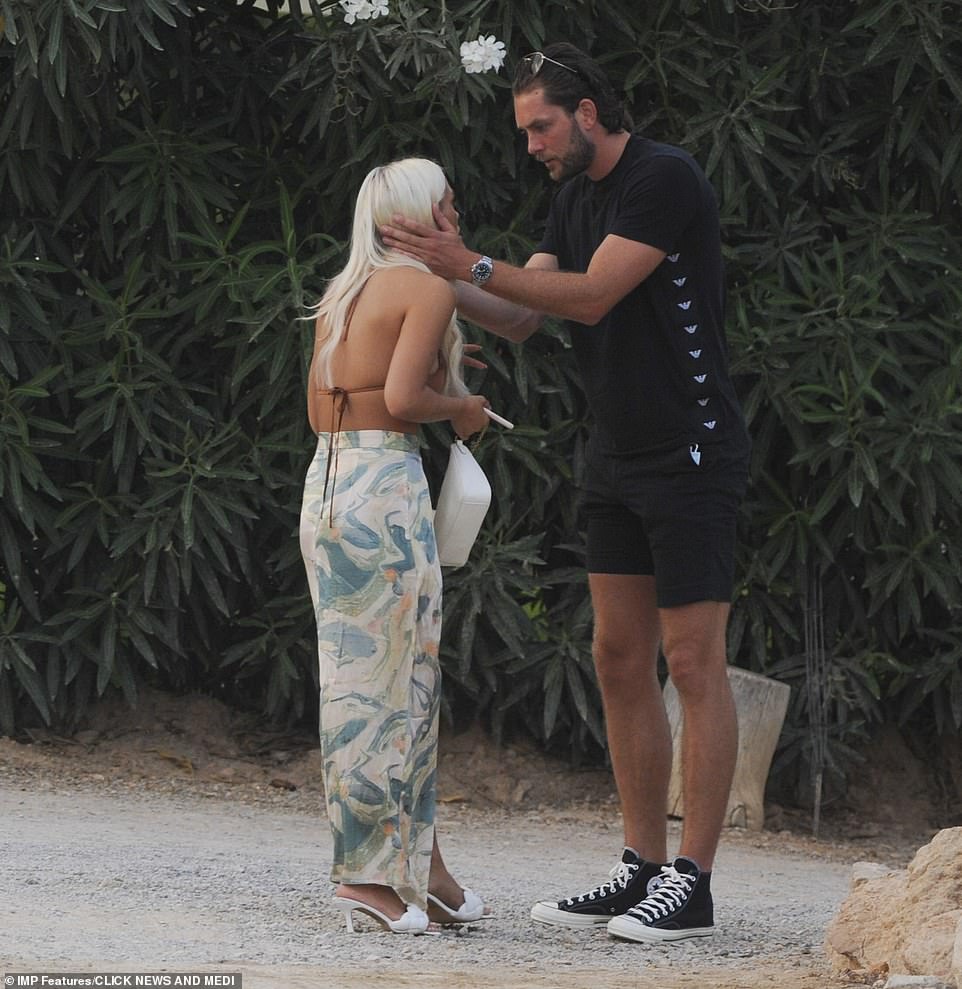 Connecting: Lewis held Lottie’s face in his hands shortly after she exited the car

Taking a moment: Lewis seemed to want to reassure Lottie, whose brother is One Direction star Louis 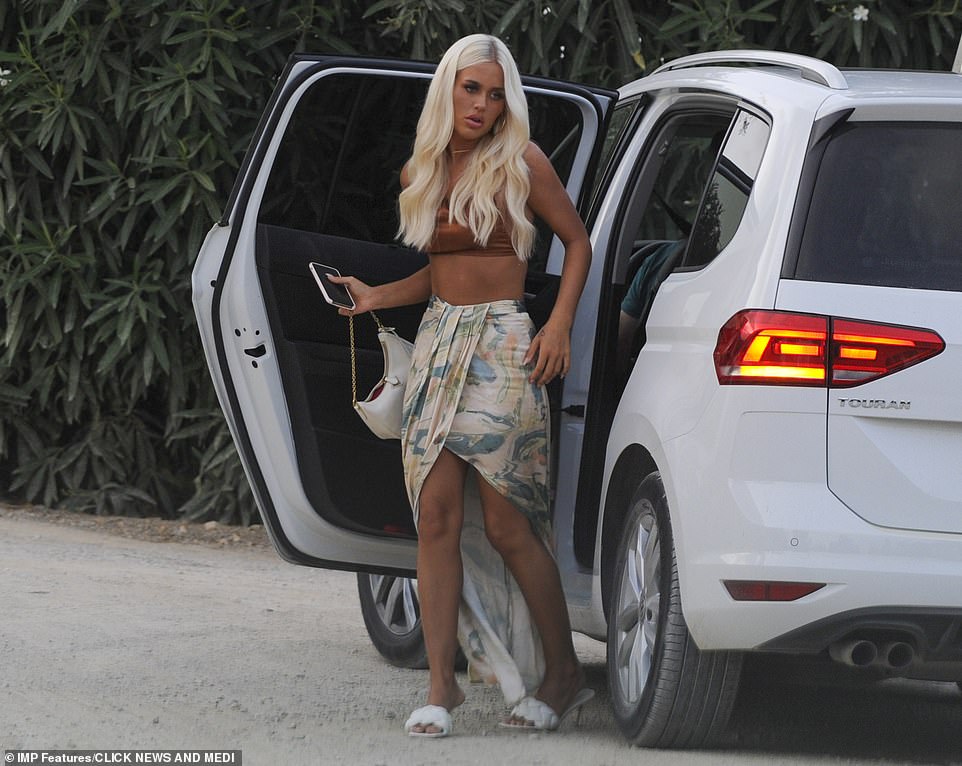 Golden girl: Lottie looked beautiful as she climbed out of her taxi 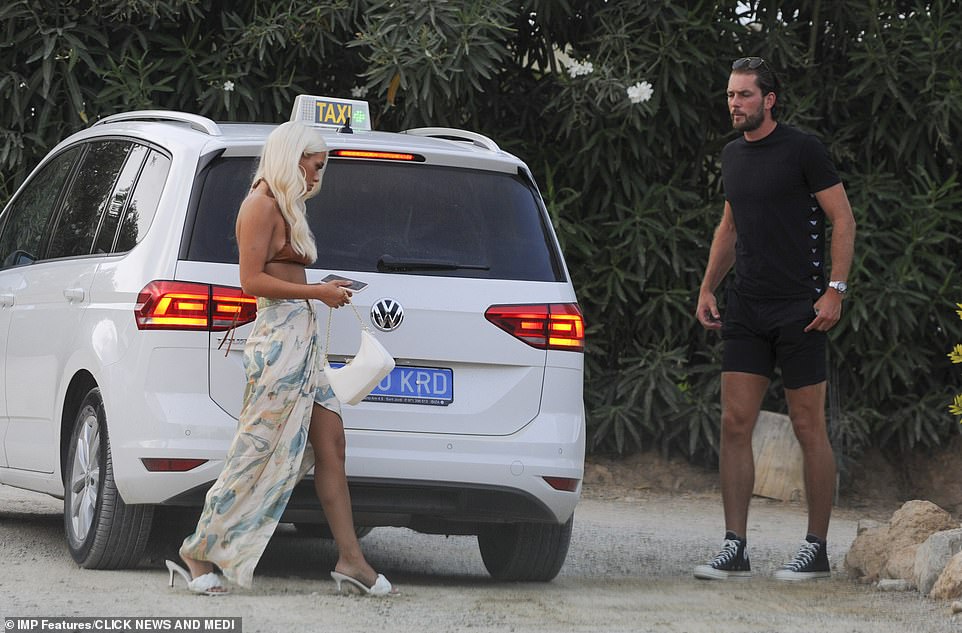 Bond: The couple fuelled rumours they had ‘grown close’, after photos exclusively obtained by MailOnline showed Lewis arriving at his flat with Lottie at the end of July

This fuelled rumours they had ‘grown close’, after photos exclusively obtained by MailOnline showed Lewis arriving at his flat with Lottie at the end of July.

Caroline passed away at her London home on February 15, days before she was due to face trial for assaulting Lewis, who she had been in a relationship with for just over six months.

The TV presenter was arrested in December for assault and charged with attacking the model at her home in Islington.

Lewis dropped his assault complaint against Caroline but prosecutors pursued it and the couple was told not to have any contact.

It was confirmed following the inquest that Caroline killed herself after hearing she would definitely be prosecuted for assaulting her boyfriend, a coroner ruled. 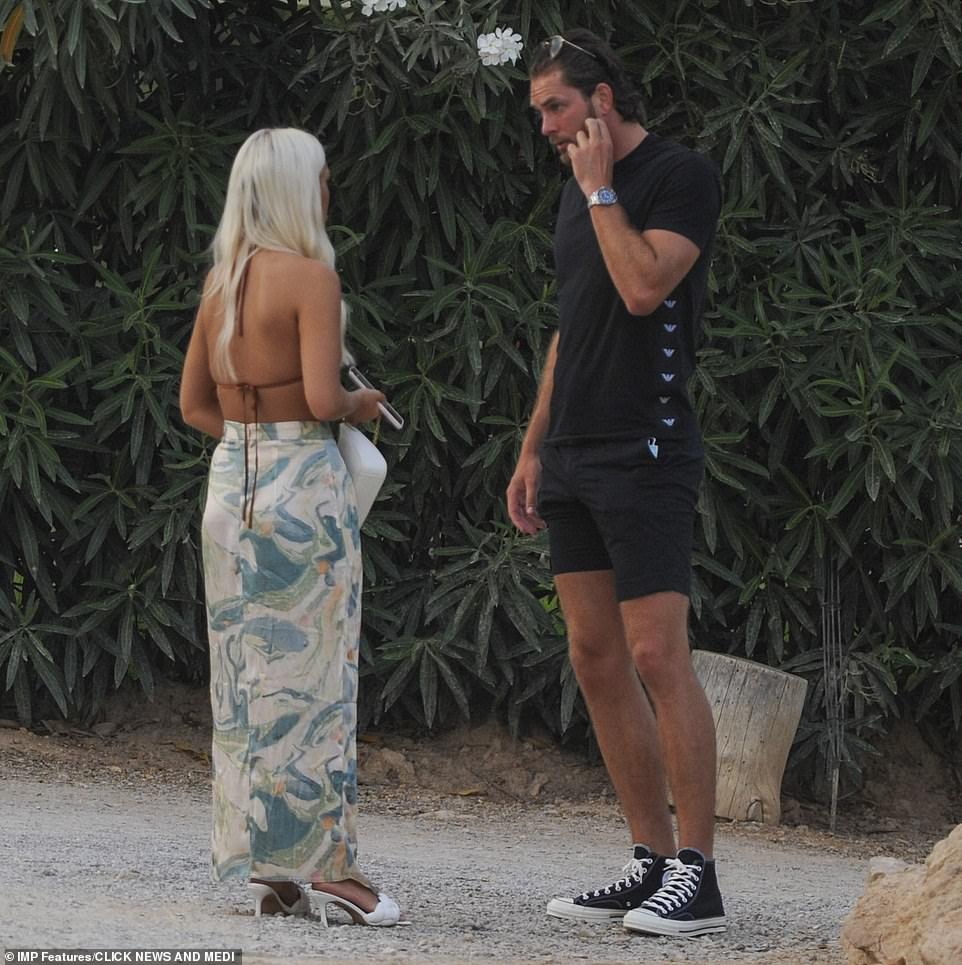 Close: Lottie became better acquainted with Lewis at a house party in May hosted by Caroline’s close friend Lou Teasdale, 36, which was held to mark three months since her  death

Sad: Caroline passed away at her London home, days before she was due to face trial for assaulting Lewis, who she had been in a relationship with for just over six months 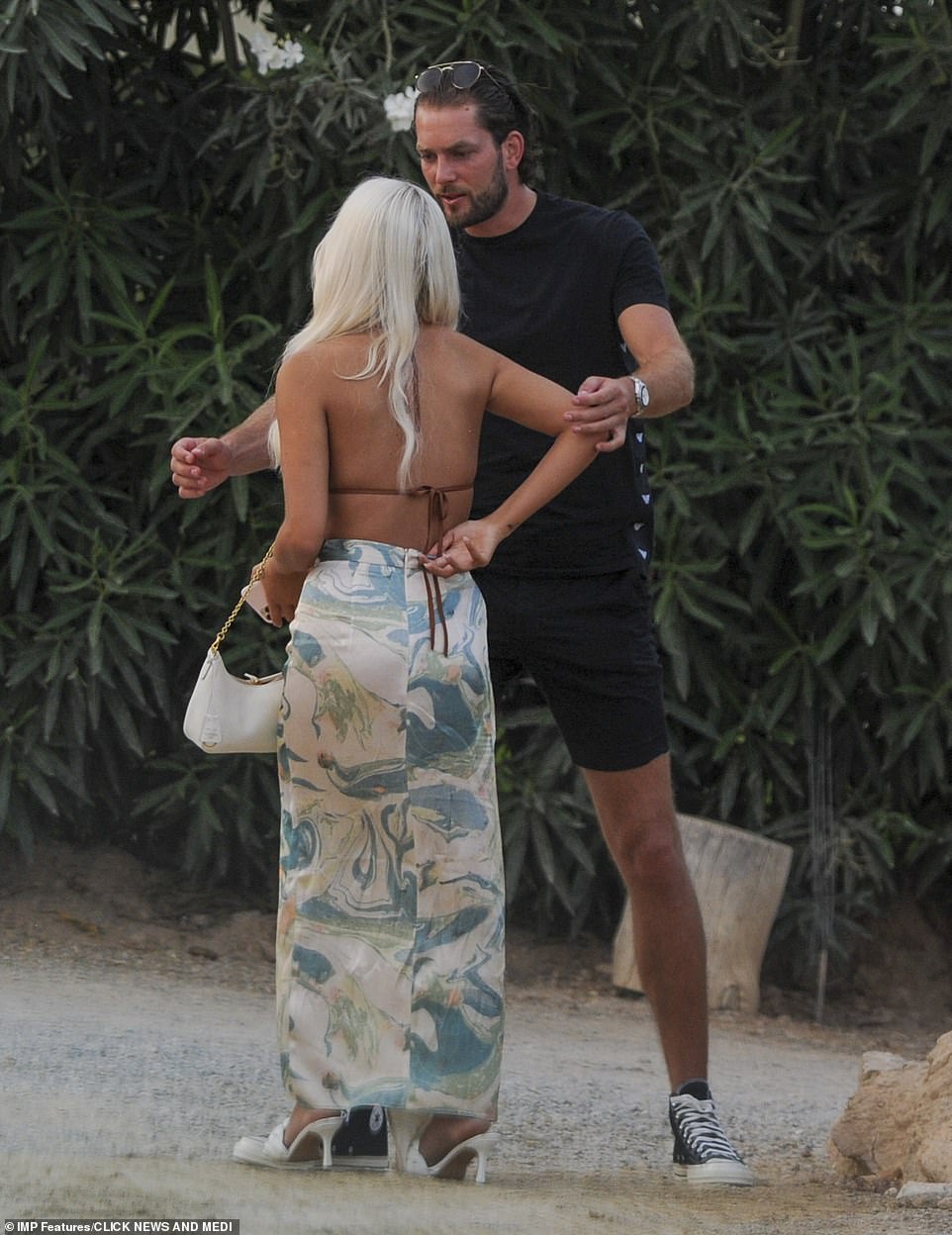 Come here: Before long, Lewis outstretched his arms for a cuddle as Lottie walked towards him

Lightening the mood: Lewis smiled at Lottie as tensions thawed between them for a moment

Caroline’s mother also confronted the police officer who pushed for her to be charged at her inquest and said, ‘you should be disgusted with yourself’.

Coroner Mary Hassell gave a verdict of suicide, saying: ‘I am entirely satisfied she intended to cause her own death. She hanged herself.

Caroline strongly denied assaulting Mr Burton, and had pleaded not guilty to assault by beating at Highbury Corner Magistrates Court on December 23.

Her sister, Jody, said she tried to take her own life before the first court appearance, and then a further two times before she hanged herself at her London flat.

Flack’s family repeatedly accused the authorities of pursuing a ‘show trial’ despite being aware of her worsening mental health.

The court also heard new details of a note that was found near her body, which read: ‘Please let this court case be dropped and myself and Lewis find harmony.’

The TV star’s twin, Jody, who was watching the inquest on a video link with her mother, Christine, confirmed the note was written in her sister’s handwriting.